After a surprisingly efficient meet up at the Timmies in Squamish the 5 of us headed towards the rubble creek parking lot Saturday morning. Paul, Reid and I started up the trail while Brendan and Caitlin drove to the Cheakamus lake parking lot to set up the car shuttle. I’m likely the worst person to describe our route as a generic hut along the trail had me believing we were near Elfin Lakes… (Luckily I was with more geographically capable individuals!) but hopefully the pictures will indicate a rough route? 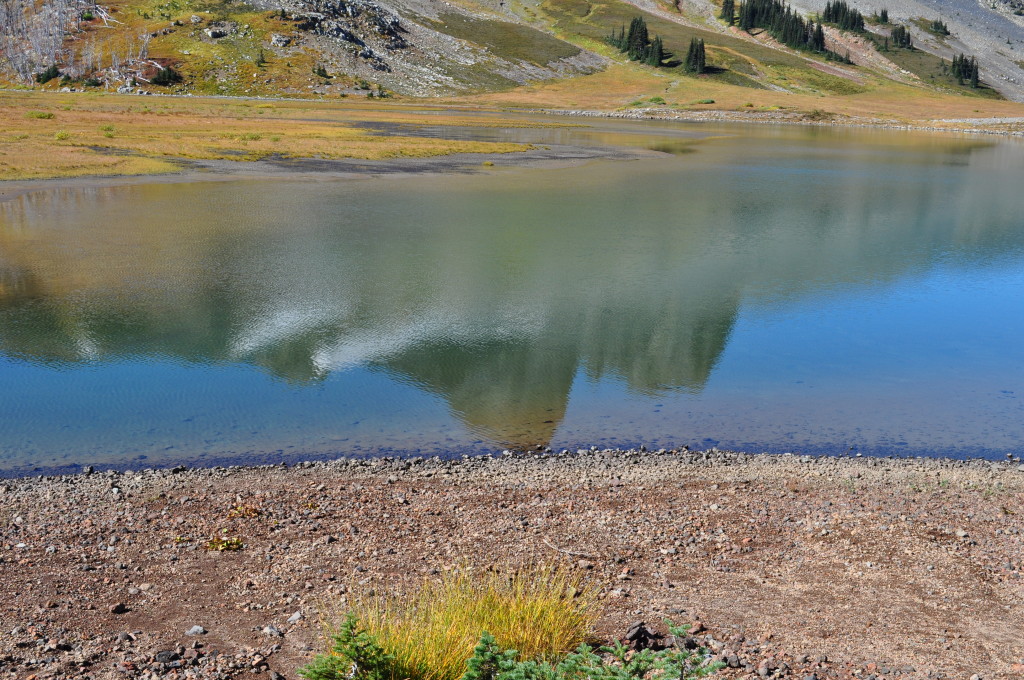 the black tease in helm lake

The walk from the parking lot to Black Tusk provided great views with black bear, marmot, and mountain goat sightings! 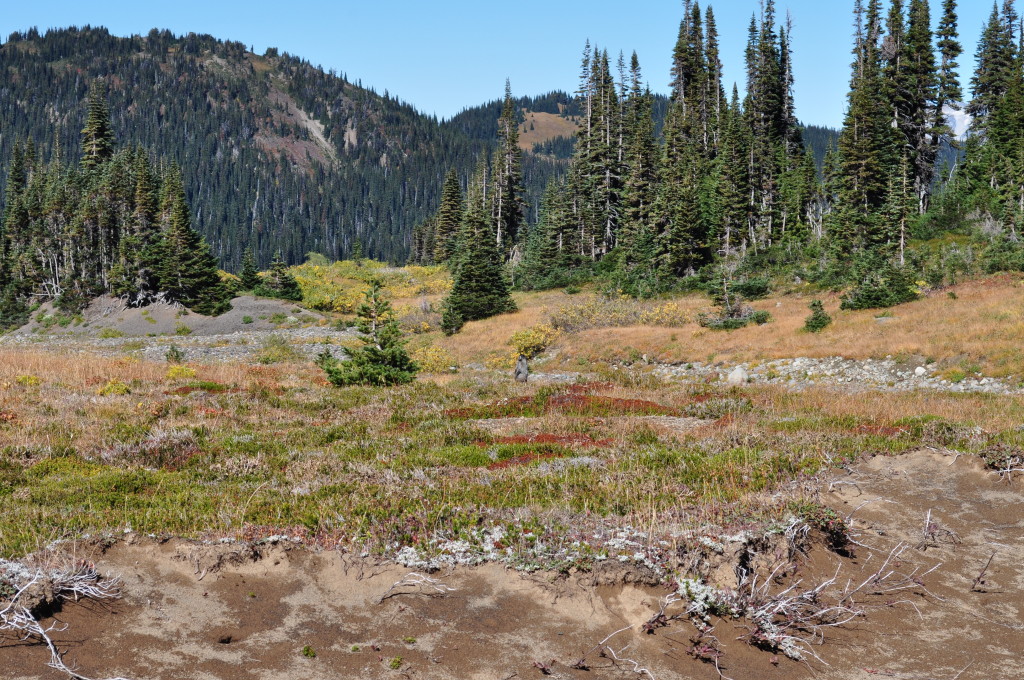 After walking up and down things for a few hours our objective appeared on the horizon! 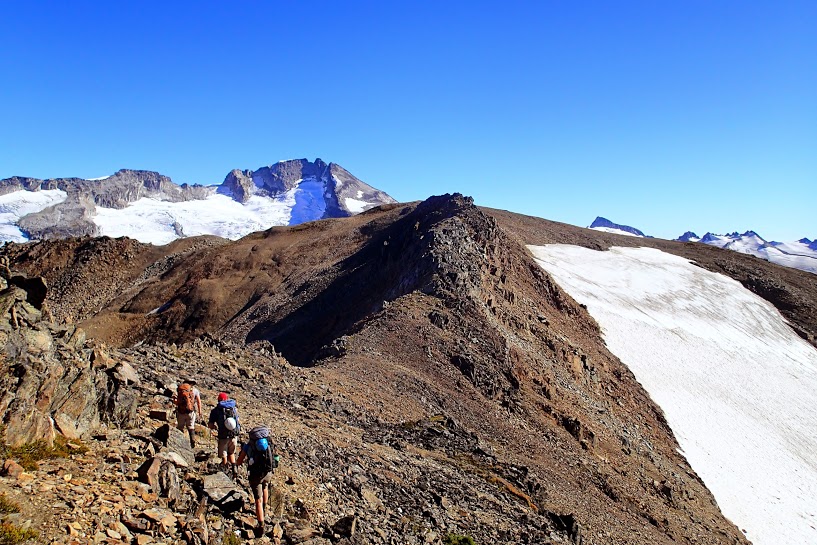 So close yet so far! (Photo by Brendan Wood)

I was pretty stoked when we started up polemonium ridge as I knew it meant we were close to where we would camp for the night. Unfortunately the stoke faded the third or fourth time I got to the top of a ridge thinking “this is it, it won’t be long now” just as another appeared on the horizon. Similar to how one feels when running up a down escalator with no end in sight. Eventually it ended and we rewarded with a wicked view of our camp and the knowledge that we’d be able to sprint up to the summit the next day. All we had to do now was get down to camp (the grassy patch in the picture below). This required making our way down an intimidatingly loose gully. Fortunately we avoided returning to this gully by following a group up a much better route the next day! 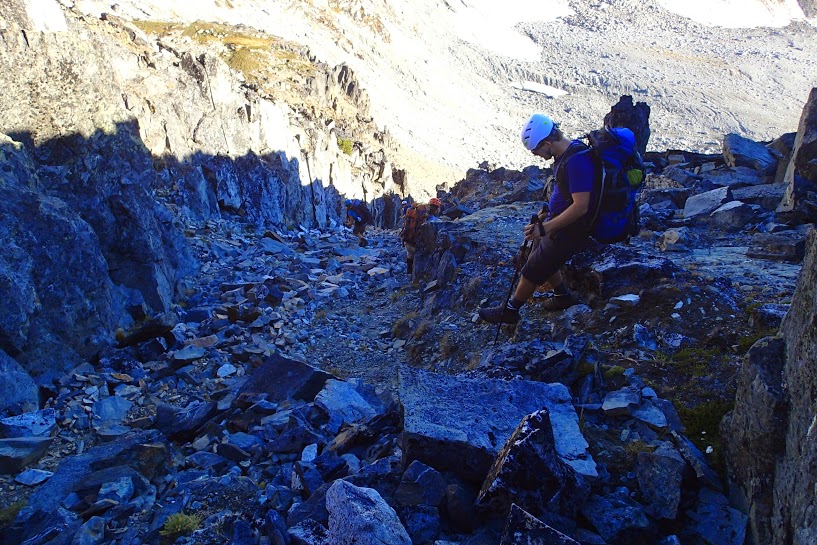 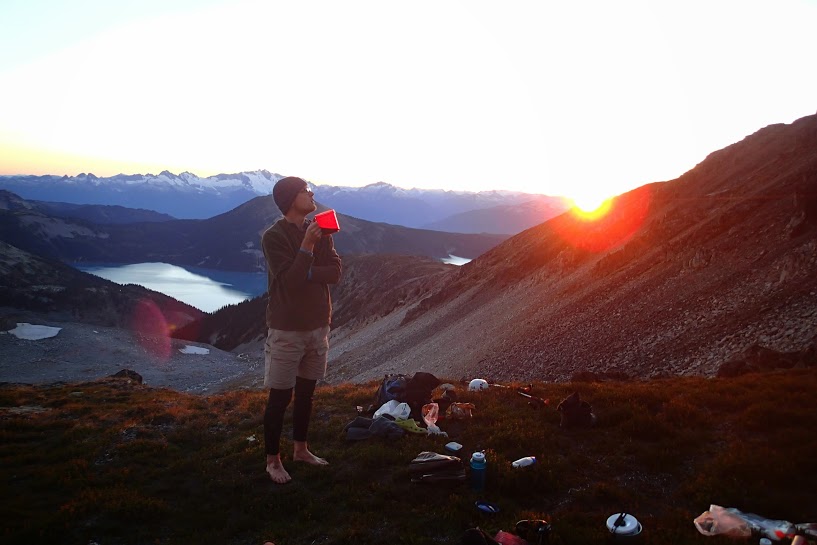 We made it to the base of castle towers and our camp for the night around 6 with plenty of time to relax and enjoy the sunset over mountains and glacial lakes! 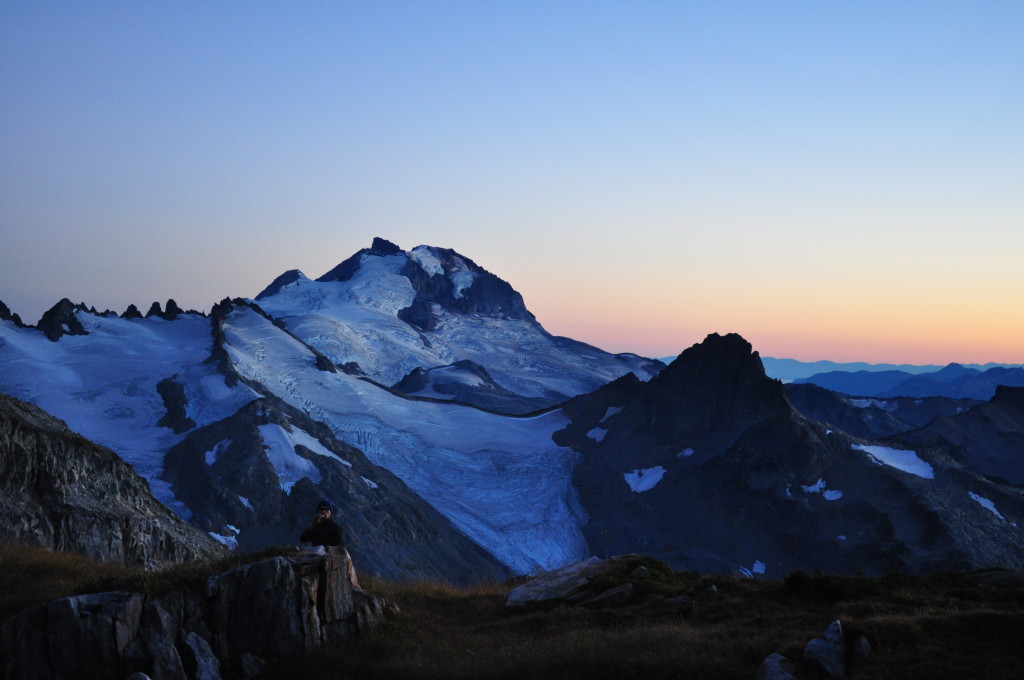 A wild toothbrusher in its natural habitat is caught in a time lapse.

We woke up at 6 the next day ready to go climb something pointy! Being from Ontario and having little experience on mountains, I was pretty stoked to summit castle towers! I found the journey to the west summit to be brief and enjoyable, but maybe that’s to do with the lack of deceiving ridges… 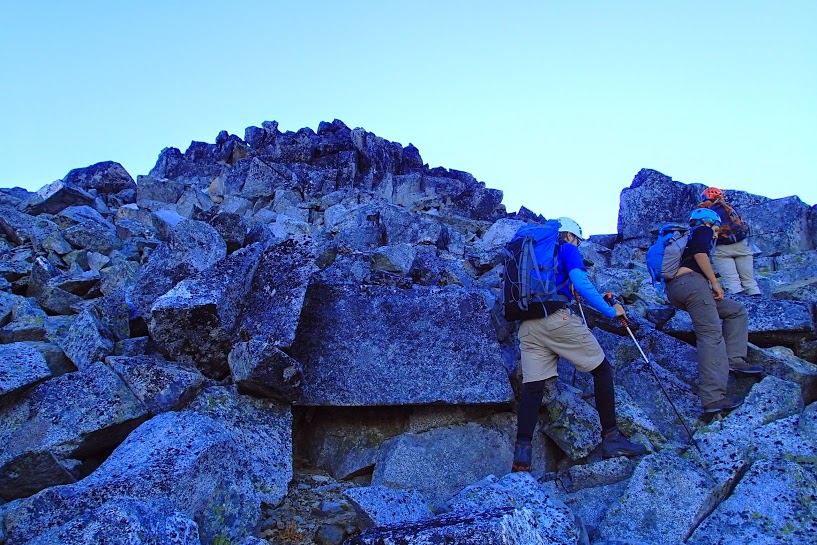 Approach to the west summit (Photo by Brendan Wood)

After a short break on the west summit Brendan, Paul, Caitlin and I continued on to the true summit. Despite getting properly scared a few times on the way to the summit I’d say it is worth doing (despite what some books says)! 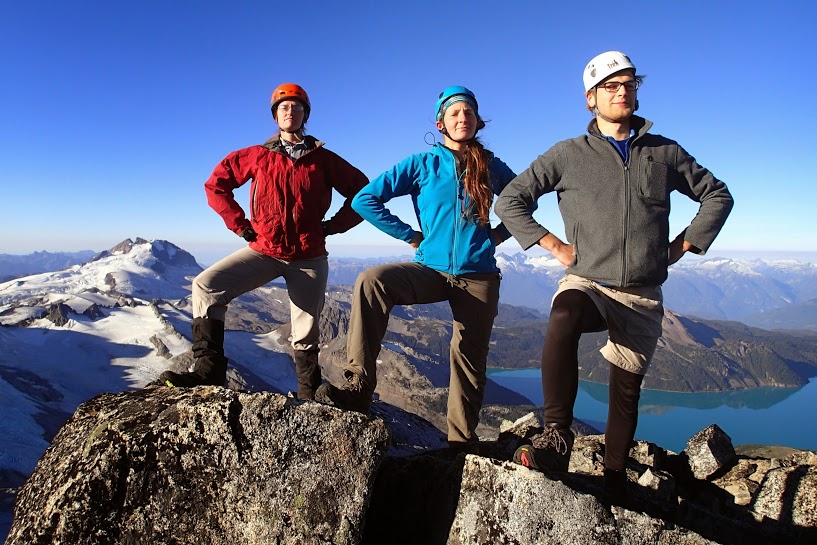 The view was spectacular to say the least. We sat up there a while taking more summit pictures and admiring our surroundings before heading back down. We packed up camp quickly and were looking back at castle towers across gentian pass before we knew it! 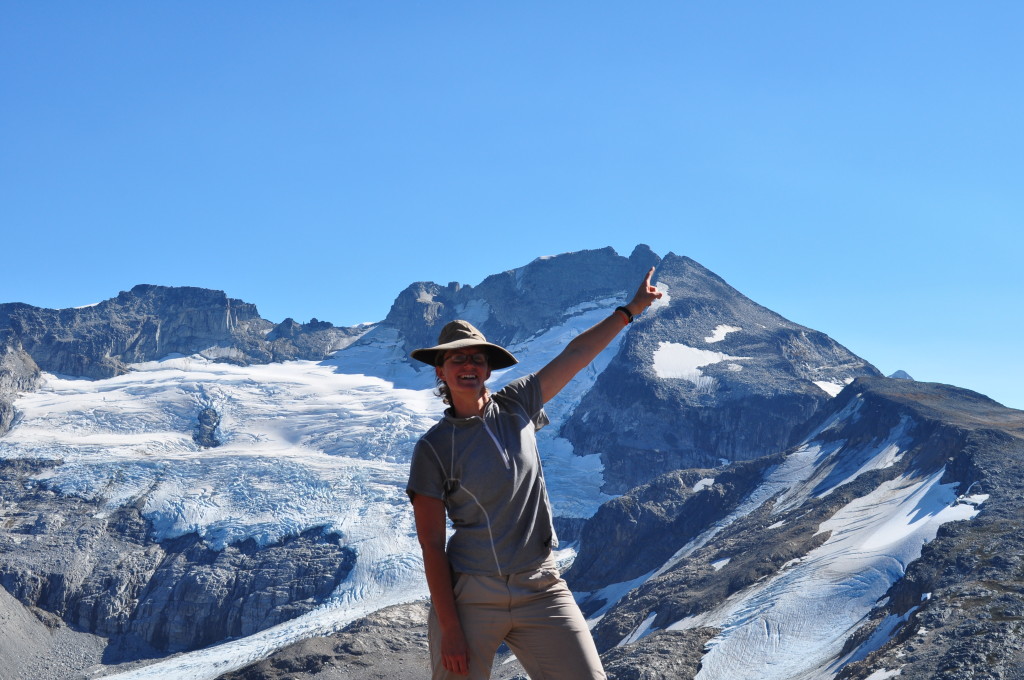 Caitlin points out the summit!

We took a quick break at a small glacial pond to swim and have lunch before carrying on to chek lake. One brave VOCer even managed to swim out to and stand on the ice! 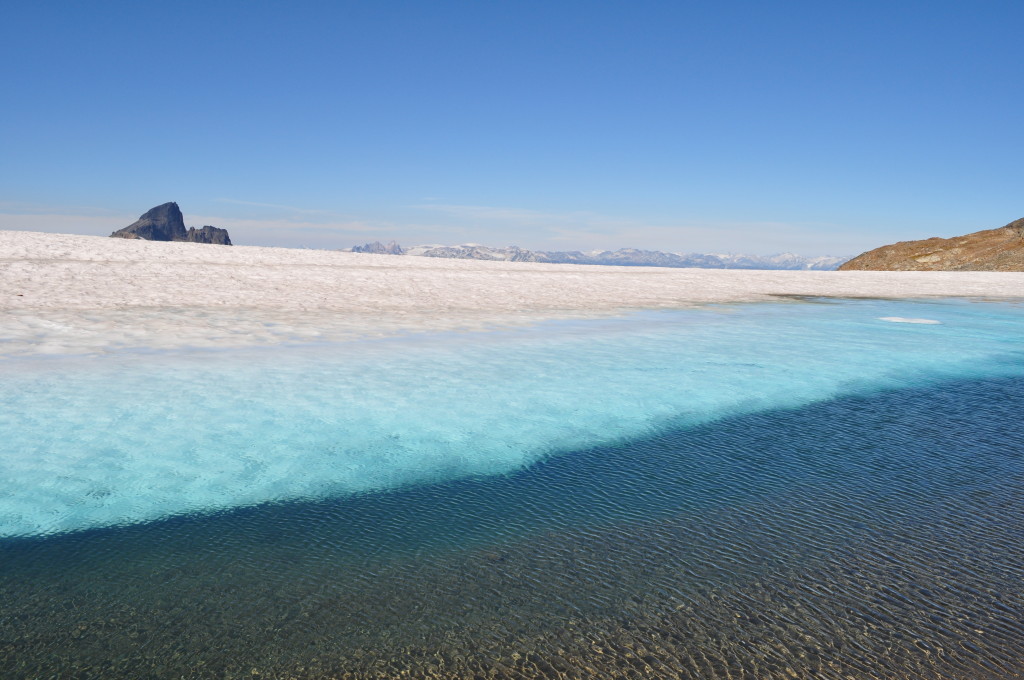 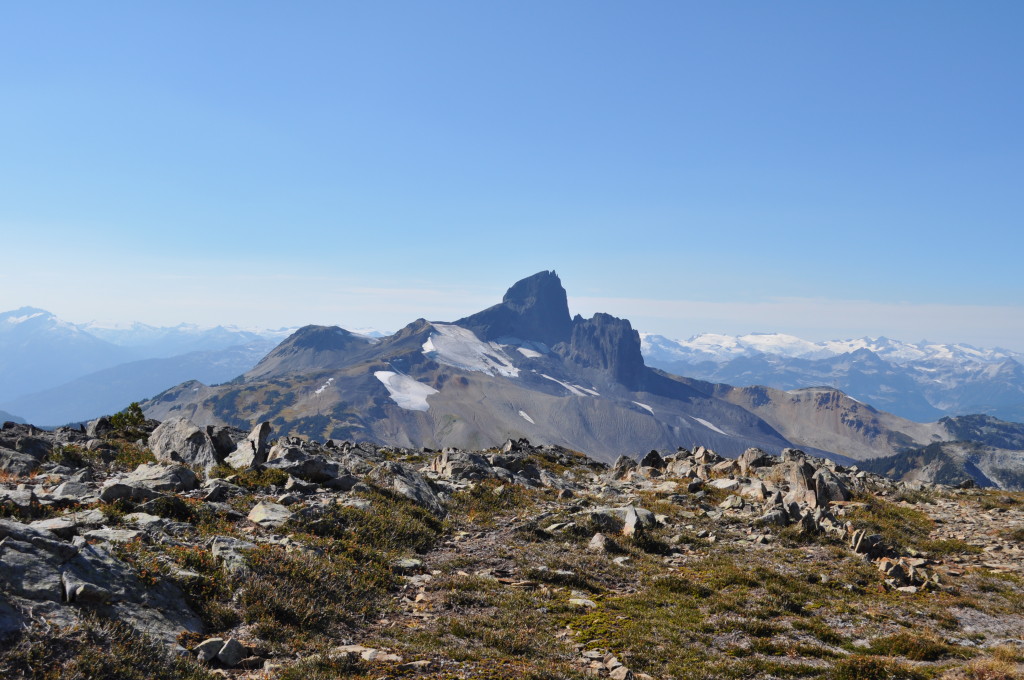 One last glimpse of black tease. I’ll be back for you…

We made it to a pleasantly predictable trail that would take us up to chek lake. Barren boulders turned into a thriving understory full of fall colours and the views of mountains were replaced by monstrous western red cedars. To my knowledge everyone had a stellar weekend in a beautiful area with lovely weather. Many thanks to Brendan, Caitlin, Paul and Reid for being such a great crew! Additional thank you to Caitlin for sharing her stoke for traverses and teaching me some local geography.