Scraping up the Scree – Beginner Friendly Scrambling in Wedgemount Lake

Standing outside my house early on Saturday morning, my pack fully loaded with gear, I was struck by how quiet and serene the city is in the early hours of the morning, while most normal people are still in bed. This serenity, however, was soon unashamedly shattered by the roaring of a truck chugging up the hill in my direction. Before I even saw the vehicle I knew for sure that this would be my ride. Only VOCers would be blasting country tunes out of a truck with a broken muffler that sounded like an elephant with gas, at 6 in the morning. Two hours, several country albums, and a Timmies stop later, we pulled into the Wedgemount Lake car park. With 22 VOCers on the trip we were a big group; but everyone was stoked and ready to send some mountains.

The 7km hike from the car park to the lake was fairly uneventful, but getting to know new people made the constant elevation gain pass quickly. There was Ian, the seasoned VOCer who knows every peak in BC, Chris, the Kiwi (or was he Aussie?…) who waited for no man, Malin the European exchange student who is just waiting for the ski season, Nick, one of very few first years who join the VOC, Reuben, the chocolatier who brought enough chocolate to feed a small army, and Kevin who was just stoked on life.

An early morning cloud had more or less blown off by the time we reached Wedgemount Lake, giving beautiful views of the lake with the summit of Wedgemount in the background. Tent pads were claimed and lunch became the order of business as people filtered in at their own pace. It seemed like we had hardly caught our breath before Ian and Chris were bouncing about and itching to get to the top of something. This inspired action from those of us who had already been at the lake for a little while and soon there was 8 of us ready to lead the charge up Mt. Cook with another group of VOCers who were going to follow us up a little later. 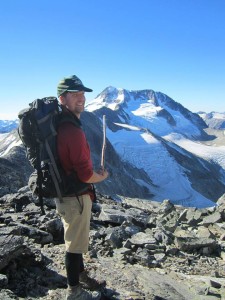 While we were all super keen, no one really had a very good idea of the best route up to the top, but we pointed to the peak and started in that direction. After about an hour of pristine alpine meadows, we were met by the first oppressive looking scree slope. Instead of walking around to the back side for a much gentler incline, we were lured into heading straight up what must have been the steepest section of slope in search of the shortest route to the top. With our Kiwi Mountain Goat running up ahead of us, Tobias, Malin, Reuben, Nick, Ian, Kevin, and myself slogged up the loose and shaley slope, trying not to send large rocks hurtling in each other’s direction. When we finally got to the ridge we were greeted with fantastic glacier and mountain views, and within 20 minutes we were at the summit. Mt Weart and Wedge kept poking their peaks out of the cloud long enough for everyone to snap the necessary photos, with only a few shameless selfies. The hike down was much like the way up, instead of taking the time to find the easiest route down, we ignored the cries of our knees and navigated the steep slope, stepping from one loose rock to another and doing our best not to drop any on anyone’s head. 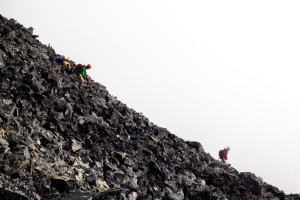 The sunset cast a brilliant golden red light on the mountains as we all trudged back into camp; but few people were thinking about that. It was time for what I had been looking forward to ever since we started hiking that morning: dinner. One of the most enjoyable things about beginner friendly trips is seeing what everyone has brought for dinner. There will inevitably be the hardened experienced trekkers who have the art of camp cooking mastered, and then there will be those who have yet to earn their stripes as a backcountry culinary artist. I have to say I was quite proud of mine and Reuben’s butter chicken (with a chocolate fondue to finish) but it was quite soundly beaten by Ian’s curry made from scratch and Kevin’s commitment to minimalism with his dehydrated dinner. The same cannot be said, however, for Nick’s packet of pasta sidekick’s, washed down with two cans of Pabt’s Blue Ribbon. After dinner, the commitment to a 6am start was set, and so I headed off for an early night, collapsing into my sleeping bag, stoked to get up Weart the next day. 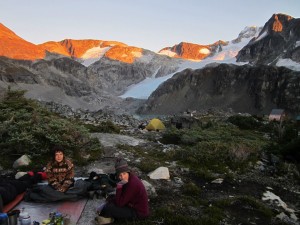 When my alarm went off at 6am it was still dark, and the alpine air had quite a chill to it! I wriggled out of my sleeping bag, threw on all the layers I had brought with me, and groggily stumbled out, asking myself if I really wanted to do this. Some warm porridge quickly got the energy levels up, however, and by the time the sun was starting to cast some light on the peaks I was raring to go. There were 15 of us who headed out from the campsite at about 7:30 and made our way around the lake to start the climb round the back side of Weart. Nothing wakes you up quite like a scree slope at 8 in the morning and before long we were all stripping jackets and sweaters in our attempt to cool down. From the top of this slope, the short flat walk to the next behemothic pile of loose rocks became a game of ‘the floor is lava’ as patches of mud threatened to swallow our boots whole! From the top of the next talus slope we could finally see our destination; the peak of Weart, bathed in glorious sunshine with no clouds in sight. It was beautiful; except for the fact that it was still at least 500 metres above us. As we waited for everyone to regroup, discussion broke out over alpine pooping techniques. Each person seemed to have their preferred method yet it was generally agreed upon that hanging onto a rock in front of you and squatting with your ass pointing slightly downhill was a good idea. Discussion then turned into a new business venture as Thea and Anne debated the marketability of ‘she-wees’ shaped like Penises’. All the talk of pooping sent Ian behind a clump of rocks while everyone else started reaching for their final cliff or nature valley bars. The grumblings for hot and wholly unhealthy food was starting to be heard and there was a divide beginning to form between Alchi Anne, who wanted to go anywhere there was beer, and Chris, who wanted burritos.

The next section of the scramble was my favourite by far. The terrain was dominated by large slabby boulders that made scaling it more like climbing. The brain buckets were an essential at this point as the near vertical slabs that we were climbing were showering small bits of gravel on those below. The top of this section left us with one final push to the summit; but not before a stop to admire the beautiful Weart glacier, the summit of Wedgemount, and a host of famous BC Mountains in the background. From our position the final section looked like a very loose, exposed, and altogether sketchy final scree slope to the summit, but as we began to make our way up it we discovered that it wasn’t nearly as bad as it looked. We fell into a rhythm. Hand, foot, hand, foot; at this point stopping was not an option, we had one goal, and it was to stand on top of the second highest peak in Garibaldi Park. Exhausted, we finally reached the summit and the views that met us were absolutely spectacular. 360 degrees of mountains with visibility as far as Vancouver Island. It was a busy peak! With 15 of us reaching the summit, but we all had a chance to take a few photos, before it was time to start making our way down. Burritos were definitely the theme of the descent with all thoughts on getting home and getting food. It was a fairly uneventful return to the campsite, and we packed everything down in short order, only stopping long enough for Ian to break out his espresso maker and make a brew. 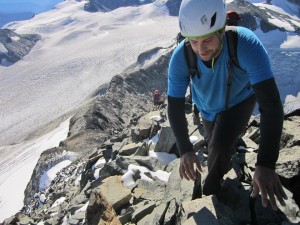 The hike out from camp to the cars always feels longer in reverse and this trip was no different. The downhill seemed relentless, but finally we all safely got back to the cars. With around 3000m of elevation gain and close to 30km of distance covered, I was so thankful that all the 22 people on the trip safely made it back with no serious injuries to speak of. No one was lost and a massive shout-out has to go to the awesome and lovely Anne Darby for sorting out and organising all the boring faff that has to be done to make sure everyone gets there and back ok! There was time for a quick game of President while the last couple VOCers made it down the mountain, and then we all piled into our cars to make the trip back to Vancouver… With a stop at Mag’s 99, for burritos. 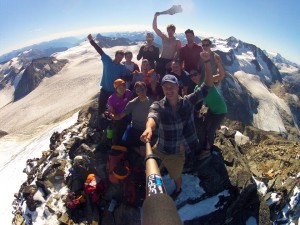