I was dying to escape the city when I signed up for the Brew Hut trip. Saturday morning finally came around, and though already exhausted, I eagerly “popped out of the ground” at Burrard Station to meet with Roland and company.

The drive up was smooth. There were introductions, talk of Higgs Bosons and the types of outdoorsy folk, and many of Roland’s stories. We made a brief stop at Timmy’s, where the rest of the crew joined us. All together, the seven of us headed up to Brew for the weekend.

We had been forewarned that the trails would be rivers before the trip, but fortunately “rivers” was an overstatement by the time we started the hike in. Manageably muddy would be more appropriate, and only for the first section. Our company soon split into three: Roland, Yu Ning, Rachel, and Erica; Steffen and Sam; me. Being brilliant, I had decided to follow the trail markers to Brew Hut by myself, which I eventually realized was not the brightest idea as markers became scarcer in the (spectacular!) alpine meadows and lakes in the last leg of the trail. As this realization set, voices emerged from a relatively nearby trail marker and lo and behold, I came across Roland, Erica, Yu Ning and Rachel. Needless to say, I gladly trailed alongside them for the remainder of the way. 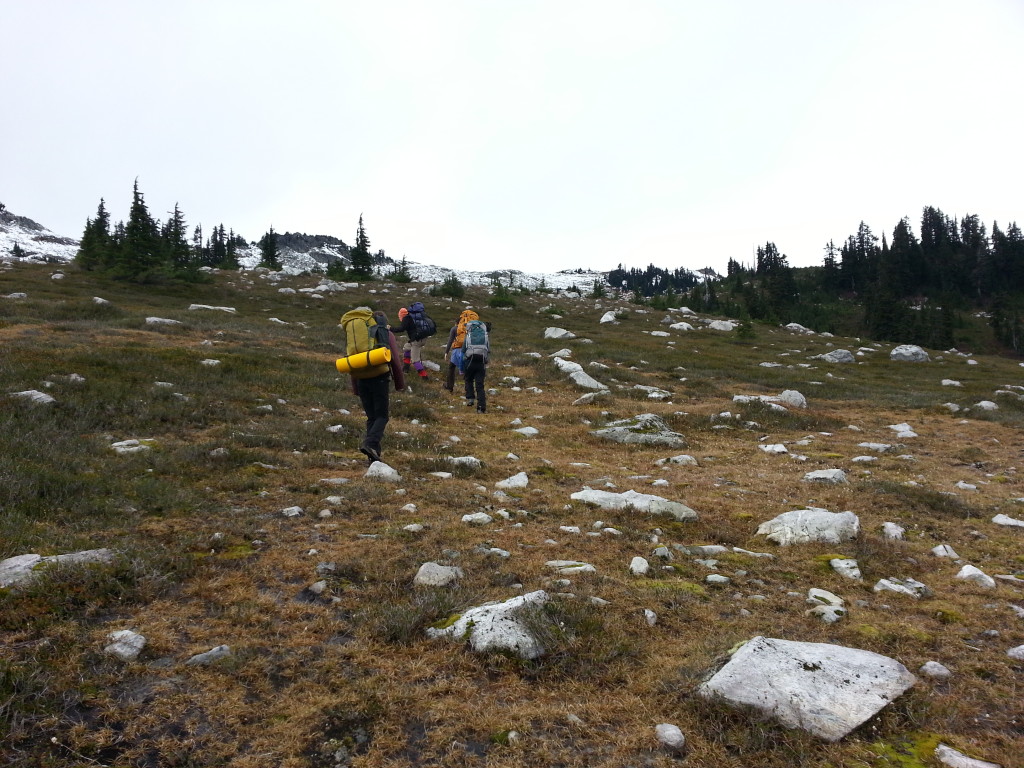 Brew Hut (the third) sits at the top of a rocky ridge and is surrounded by lightly (and not so lightly) snow-dusted peaks. In one direction, Garibaldi and Whistler could be seen towering far away, and in the other, the Alcoholic Traverse stood soberly. We reached the hut just after 2PM, and were greeted by Steffen and Sam, who had reached the hut before us and were settling in.

After unloading our packs, all but Roland ventured up Brew. At the top, snowmen were built, snow was thrown, and other general buffoonery (including an uncomfortable attempt to make a snow angel on hardened snow, a quick bit of snow baseball, and some sledding down hills on our backs and stomachs).

We were welcome back to a warm hut, as Roland had gotten a fire started in our absence. It was still very light out, but not light out enough to hike up any of the other peaks, so we were tasked with chopping firewood and kindling for the evening (note that we used very little firewood). It was an easy and habitual task for some (namely, Sam), and quite a formidable task for others. 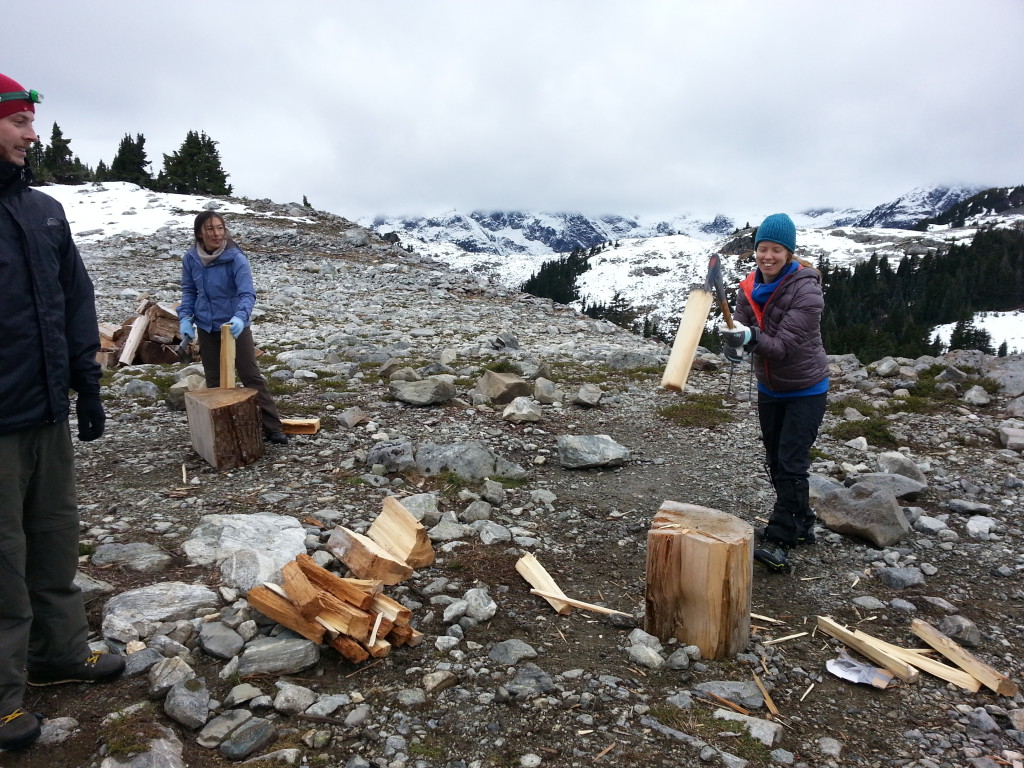 By the time we had chopped sufficient firewood, it was still far to light out and way too early for dinner. Steffen, Sam, and I decided to quickly do a little bit of exploring. We quickly became immersed in building a pretty awesome rock sculpture, which was precariously balanced on just one rock.

Dinner was full of too much Kraft dinner. The rest of the evening involved whiskey, wine, questionable hot chocolate, a heated game of Hearts, many stories, and a quick check on the rock sculpture, which was surprisingly still standing. At some point, it had begun to snow and eventually we headed for bed after deeming it sufficiently late.

Sleep was preceded by story time out of an old VOC journal. While comfortable in sleeping bags, a guide to backcountry pooping and past VOC adventures were read aloud. Snoring was heard, and I am not sure if anyone was actually awake till the end. Outside, it was still snowing. 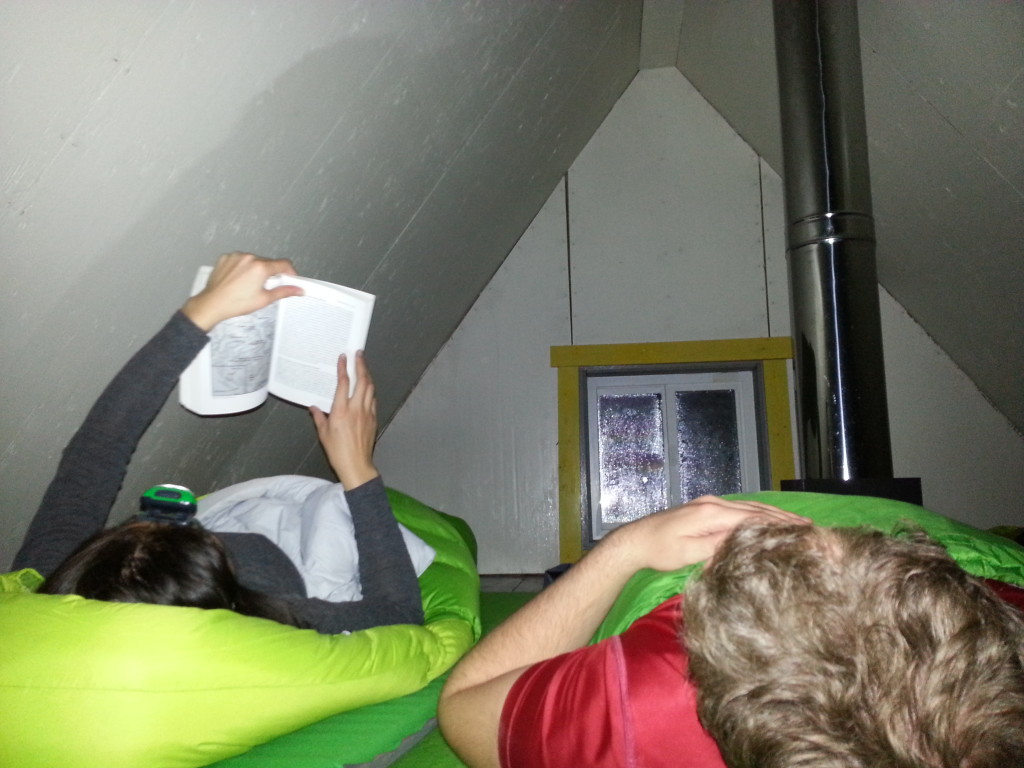 The next morning revealed a notable amount of fresh snow. Another quick check on the rock sculpture showed that it had collapsed sometime during the night. Breakfast was slow and we never ended up finishing the left over Kraft dinner. The sun peeked out, and we were treated to views of the surrounding mountains. We headed out and made our way through newly snow topped rock gardens and alpine meadow and encountered a pika. Brew Hut had been a great base. 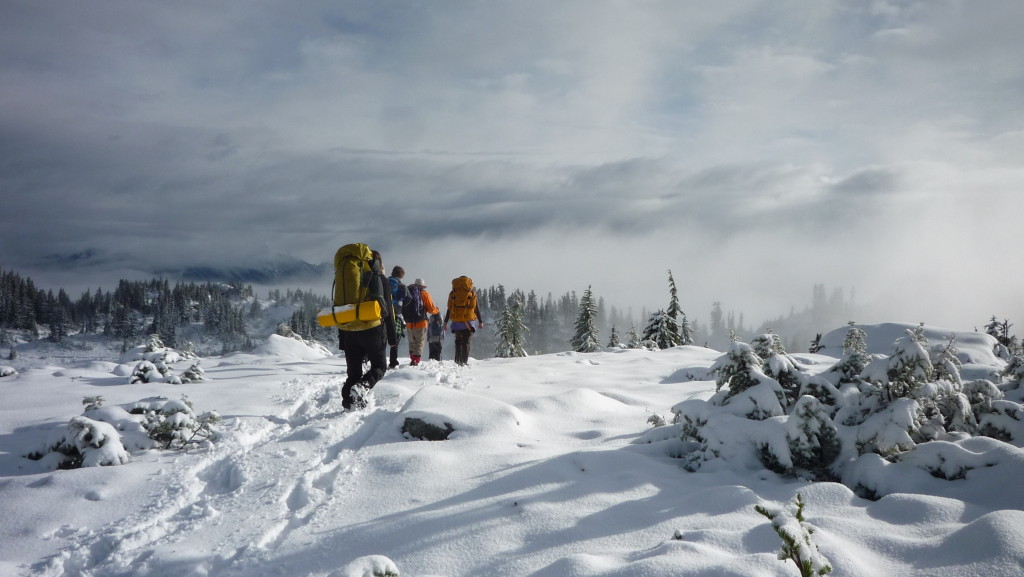 The drive back was pretty quiet and uneventful, except that the logging road up to the trail head had been partly blocked by boulders (though still passable when we were there). Roland had made some excellent date loaf, and we were mostly passed out. There were brief mentions of Higgs Bosons. 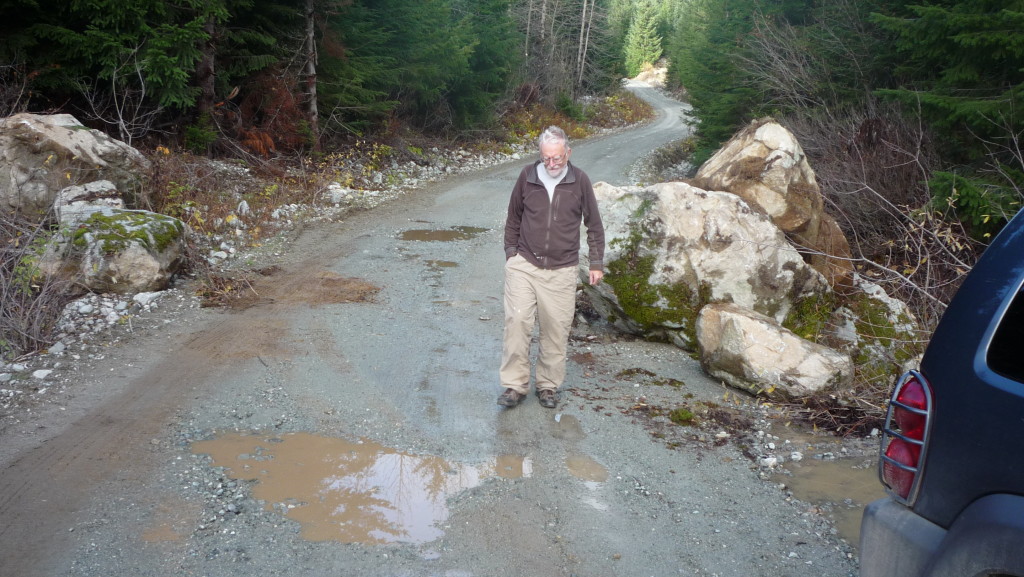