Posted on November 11, 2014 by Jeff Mottershead

A short preamble: For this to make make any sense to people new to the club I need to give a bit of background. Those familiar can skip this bit.

Way back in the day there was keen VOCer Julien Harrison that everyone liked. He was killed when an avalanche squashed his snow cave. The club built a hut in a very scenic area west of Pemberton and named it after him.

The hut and some snow.

Ever since the Harrison Hut was built there have been access problems, occasionally coming from locked gates on the road but mostly from a big nasty volcano named Mt. Meager. Meager hasn’t erupted in a long, long time but it does have fairly regular landslides that sweep away logging roads and bridges. In the past we could normally access the hut when the bridge over Capricorn Creek was intact and not when it wasn’t.

Four years ago, right after they finished building a new bridge, an entire sub-peak of Meager came sloshing down Capricorn Creek and demolished the bridge, the equipment used to build the bridge and many kilometres of logging road. The government decided that it didn’t like volcanos anymore and wasn’t going to put in a new bridge. The geologists have since concluded that it was the largest landslide in Canadian history. 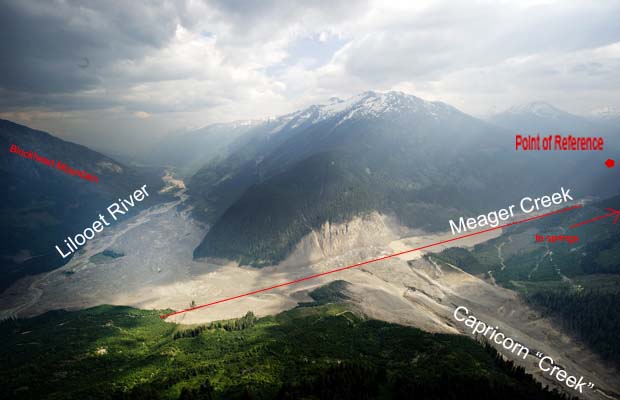 Since then the VOC has been working on getting a trail built that goes on the other side of the Meager Valley, such that we’re not at the mercy of a volcano. All sorts of people have done a huge amount of trail work. I’ve put a lot of effort into Barr Creek. It’s close to the hut, needs to be crossed and in the summer moves enough water that falling in would kill a reasonable fraction of VOCers.

The bridge has been an iterative process and is now not likely to fall over. This has not always been the case:

September 2013: A group of people carried painter’s scaffolding down where it was heli-dropped at the hut. They put it across the creek and I bolted it in place as requested even though I was pretty sure the snow would flatten it. 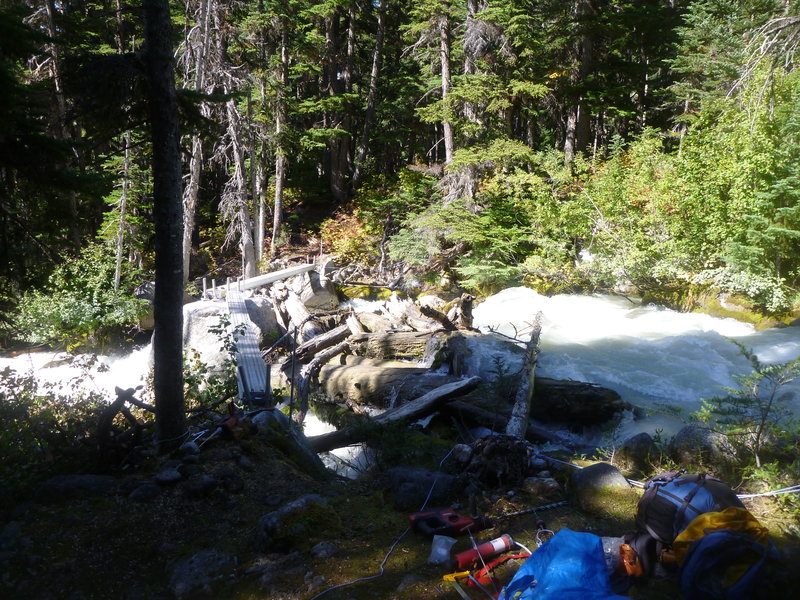 Winter 2013/2014: The snow flattened one of the two spans. Maybe I was too pessimistic or maybe it was just a light snow year. 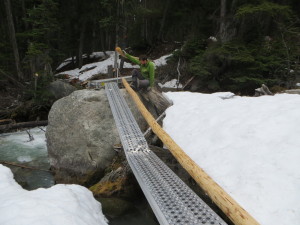 June 2014: I welded up a half-ass repair section for the bridge and we installed it. Veenstra, Lena and Nick Matwyuk skied out via Brew (86 km) and I had an epic-supreme mainly because I’d had three hours of sleep in the past three days. 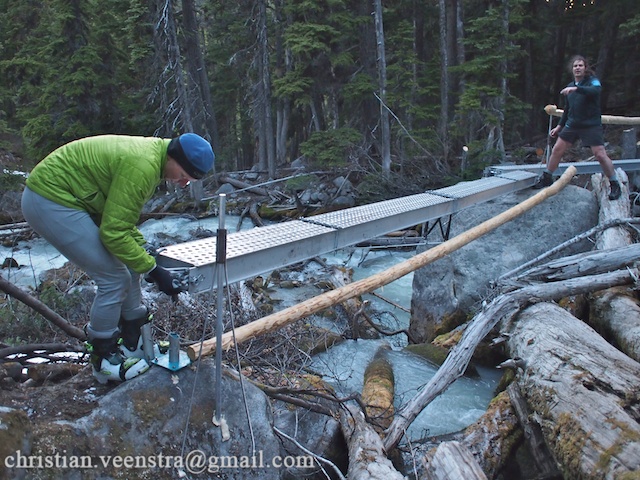 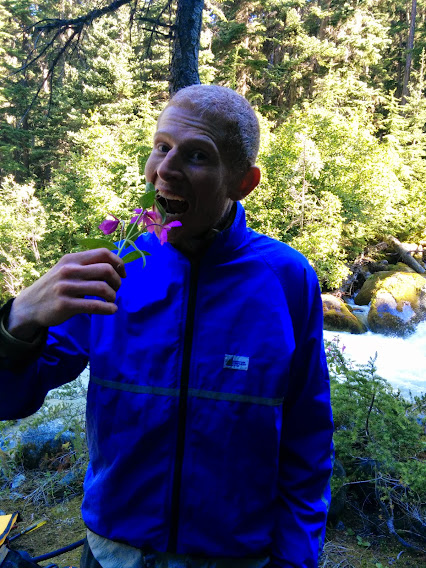 Veenstra getting down to business. People are doing real work off screen.

August 2014: Caitlin Schneider, Devlin (my son) and I installed effectively a new bridge. It re-used the existing scaffolding as a footbed but has a design strength of 5 tons which is a lot more than the 500 lbs of the scaffolding. 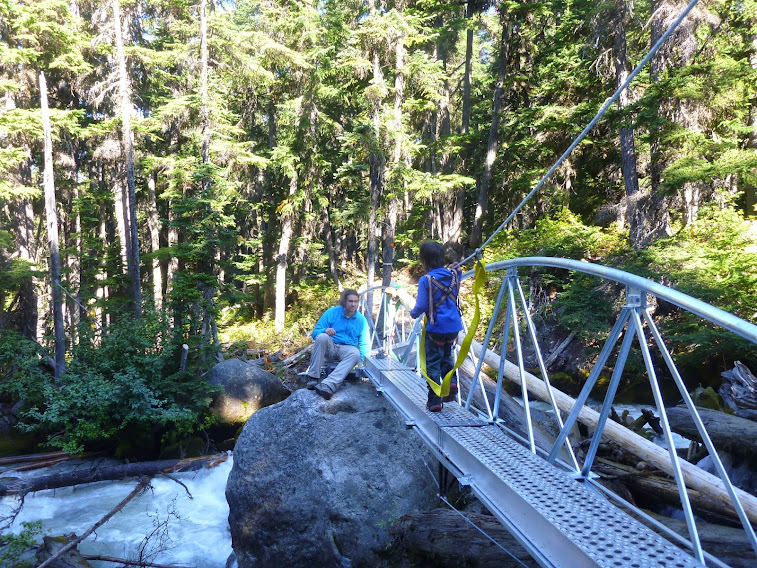 September 2014: During the whole process there had always been this big log jam a few meters upstream from the bridge. It was disturbing because if it were to come loose it could wreck the bridge. We finally got around to using a Tirfor to pull it out. Once we’d done that the water flow in the creek re-distributed dramatically to reveal that two of the boulders the bridge was on were very poorly supported from underneath. This was lame. It made me regret not pushing harder for just making a new bridge that was a single span somewhere else and forgetting the scaffolding. 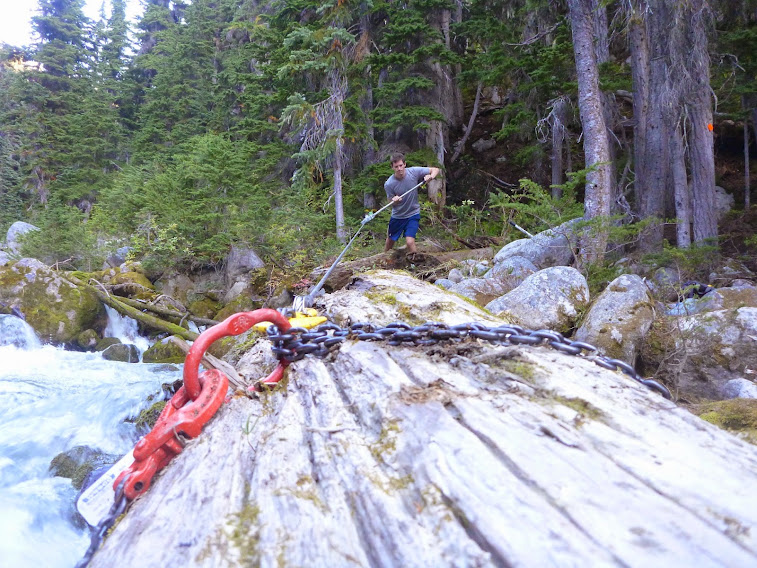 That preamble wasn’t even particularly short. Anyways, here is the meat and potatoes:

I’d welded up some supports to keep the rocks that supported the bridge from falling over. Veenstra had purchased a bunch of traction mesh for where the trail goes overtop of many logs and also rounded up a top-notch crew to do trail work and help cart steel up to the bridge. Roland did a fine trip report on the mesh installation efforts, the people doing trail work did a lot and the people bringing the steel up all did a good job, except for me.

On the first day I was slower than I wanted to be right out of the gate and then my hip started getting worse and worse for no good reason; I didn’t really do anything to it and it’s not a recurrent problem, but by the time we got to Pika Creek I was crippled. I took some of Veenstra’s Ibuprofen to try to get the swelling down enough that I wasn’t pinching stuff and making it swell more with every step. When we finally made it Barr Creek I promptly broke the one carbide bit I bought and then we were hosed. I had only bought one because the good ones are $37 a piece and they normally never break, just wear out after a hundred holes.

I tried to just drill anyways, the hammer drill hammers pretty hard so maybe I could make some progress with the carbide end broken off. At first it seemed like it was going in slowly and then it really picked up. I was going to be able to make it work!

The dust was the wrong colour and smelled like welding.

I pulled the drill bit out to find that it bright orange and had clearly been molten seconds ago. The drill had been moving down the hole because more and more of it was melting, not because the hole was getting any deeper. Veenstra and Sam went back down the trail to locate the people doing trail work and I went up to the hut. My hip was had started to more or less work, probably thanks to the Ibuprofen, so I made it to the hut without incident. I got some trail work done the next day but still felt weak, stupid and lame which was an accurate assessment.

November 7-8 (Tobias Hermann and me)

I went up again with Tobias (a different Tobias than was on the first trip) and a small fortune in drill bits. All the steel had been left at the bridge and the cement for the footings was at the hut so I didn’t need more than one person with me, although three or four would have been fine. Earlier in the week more interested parties existed than I had room for. There’s always the concern about people biting off more than their clothes can handle if they’re relatively new to the club. The forecast looked like total garbage so I grilled everyone about their preparedness and all but two dropped out. At the last minute the flu struck one of them leaving only Tobi.

As it turned out having only Tobi was great because he can really move and was great help. We were at the bridge site before 1:00 and had installed 24 holes drilled and anchors bonded in by 4:15. 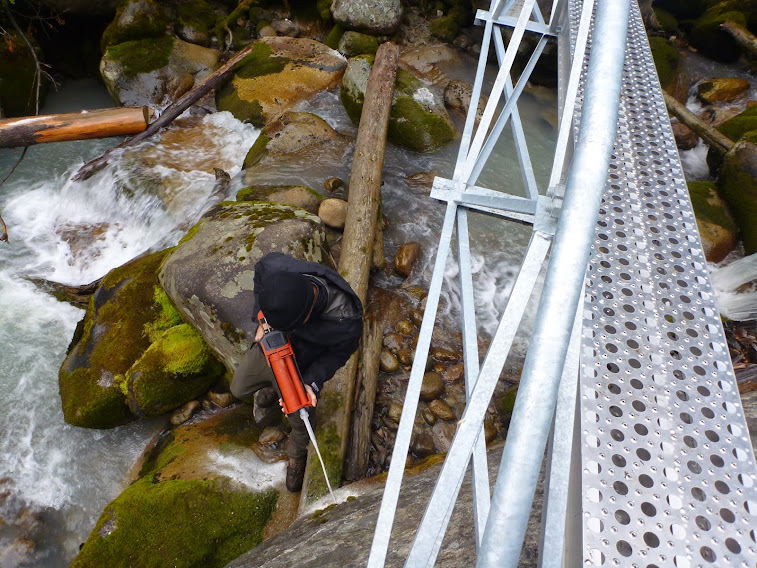 Tobi putting the magic goo (Hilti HY-200A) in the holes.

The trip up to the hut was shockingly reasonable. There was a lot of snow but someone and their dog (Mitch and Kayla the Wonder Dog according to the hut log) had waded through deep, wet snow and it had frozen up leaving good steps at the bottom of each post hole.  We didn’t even need headlamps.

It snowed a fair bit overnight and some more in the morning as we were heading down to the bridge but stopped and then the sun came out, in sharp contrast to the forecast which had raid rain all day in Pemberton. I felt guilty that I’d scared keen people off, but without having it crystal ball it was the right thing to do at the time.

We mixed up the cement and made the footings without too much of a song and dance despite the pail breaking. The melting snow was a threat to the setting cement so we made a dam of dry cement around each footing. The footings were hard when we left. It’s not clear if the dams are going to be more or less permanent or if they’re going to fall apart, but the important stuff set properly. 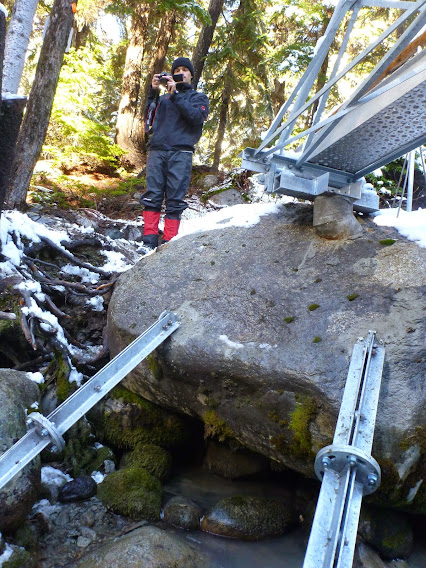 Probably not going to fall over.

Once the anchors were in place the supports connected with only a bit of reaming and prying. We left Barr Creek at about 1:30 and made it to the van by 4:40 which was before dark. This happened because Tobi really booked it and I felt obliged to force my sorry ass to keep up.

Pictures exist. The fungus was large.