This report is something like six weeks too late, but better late than never. In my defence I’ve been spending all my spare time on the stuff needed for a long-term solution for the bridge across Barr Creek. 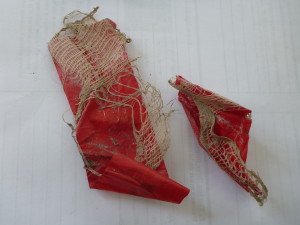 Back at the car Lena had a bag around her bike, which I think was left over from her traverse the week before. It was filled with a preposterous number of beetles.
While I definitely had the lowest caloric output and the least amount of impressiveness of anyone on the trip, I’m pretty confident that I out-suffered the rest combined.
By some miracle I arrived at the meet-up point at the same time as everyone else.
Epilogue:
On the way back all the restaurants were closed, so we stopped in at the Petro Can and got some junk. I got a bar and some chips and a litre of chocolate milk, and Veenstra purchased six taquitos from the disturbing rotating food cooker. Shortly after consuming them he admitted that six taquitos was near lethal for him.
Epilogue 2:
When we were approaching my house at around 2:00 am, Veenstra’s brakes exploded and we came squealing to a stop. There was brake fluid pouring out the back. This was a nice garnish to everything else. We got it to unlock by throwing it into reverse, and then we made it to my place in 4-low. Then he fell asleep on my couch.
This entry was posted in Hike, Huts, Trip Reports, Workhike and tagged bike, fall, Harrison Hut, Hope, North Shore, ski, Snow, traverse. Bookmark the permalink.