How Mount Rainier Defeated Us

What the hell am I doing here? This feeling of uncertainty, disbelief, of surreal adventure leading up to this moment and of the impending challenge leading away from it, has become an addiction since I joined the VOC. So when I found myself thinking this on the moonlit glaciers of Mount Rainier it was not the precursor to panic that it used to be, but instead an ecstatic fix for a fiending junkie. This moment was the culmination to date of all my backpacking, climbing and survival skills; but it was also the start, my foray into true mountaineering. This was not the first time I’d had this feeling on our trip, nor would it be the last.

We’d got our climbing permits several months in advance, beginning the internet faff and initiating the stoke. We’re actually going to climb Mount Rainier! In the week before leaving we spent a night and day up on Mount Baker’s Coleman Glacier brushing up on skills learned in Glacier School. Finally we left Vancouver, stopping only for REI and gas, arriving in the small town of Ashford, Washington, around cloudy sunset. We camped on Forest Service land that night, imagining the Mountain’s white and grey slopes. We’re actually here! In the morning we stopped by Whittaker Mountaineering to rent boots, which surprisingly felt better than my hiking boots (and way better than VOC boots.) Then it was off to Paradise, where we would start our climb.

We saw the mountain through the clouds for the first time driving the winding road to Paradise. What the hell am I doing, trying to climb this mountain? The size and power of Mount Rainier are hard to comprehend until you see them in person. At 14,411 feet, it is the most heavily glaciated peak in the lower 48 states with 36 square miles of glacier and permanent snowfield. Earlier in the season an avalanche killed six climbers on its slopes. This would be a true challenge for us novice mountaineers.

After the customary bout of parking lot faff, we packed our bags full of pointy things, got our wilderness permit and were off to attempt this disappointment Cleaver route. About half of the first leg of our hike was through the insanely beautiful meadows of Paradise, where throngs of visitors snapped photos of the mountain looming 9,000 feet above. Where wildflowers met snow we tightened our packs and made one last check that we had all our gear. The Muir Snowfield was a congestion of climbers, day hikers, guide-taught mountaineering courses and a few skiers. People were sliding down the slopes in every way possible: on trash bags, tubes, sleeping mats and even a car windshield sun reflector. Several impressive rock slides and a rock fall-induced avalanche gave me pause. Were they threats from the mountain? Warnings, maybe? Or simply realities of taking on the mountain. What the hell am I doing here?

The crowds had thinned out by the time we got to Camp Muir at 10,100 feet. Here an assortment of buildings house climbers, rangers and guided parties, and a smattering of tents hold overflow. Luckily, we only had to share the general use hut with two other people that night. I scrambled up a nearby ridge to take some photos, write and contemplate the challenge ahead. I felt I could see the glaciers oozing slowly and ceaselessly down the mountain. Because of weather concerns, we decided to make the summit push the next morning without using our extra day to acclimatize. Gear faff, dinner and melting snow took longer than we intended and we wriggled into our sleeping bags around 21:00.

After two hours of rolling around and pretending to sleep we got up at 23:00. In the dark of midnight we silently ate cold oatmeal, slipped on harnesses and roped up. We were hiking by 00:05, trying our best to stay ahead of the train of headlamps that marked the guided group behind us. Despite this, I was glad the guides had flagged out the entire route and that previous parties had created a trench for us to follow, as I imagined route-finding through the darkness would have been very difficult.

It felt like the next six hours were a dream, continued from my restless sleep. The crunch of crampons on hard snow, the plunge of ice axes, the clink of carabineers; sounds seemed to echo in the bubble of light from my headlamp, but no further. The gleam of stars on snow, the darkness where the mountain towered above, the half moon rising over a sea of clouds and Little Tacoma; sights seemed as if they were shot in 24 frames per second and projected into my eyes. The guides had put fixed lines in several places and an aluminum ladder spanned one larger crevasse. I still wasn’t sure what I was doing on the mountain as I stared down at the darkness below me while I crossed this ladder, but it didn’t matter; I was having a blast. 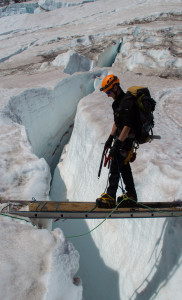 Myself wondering what I’m doing there. Photo credit: D.F.

As the sun rose over peaks wrapped in cloud I felt myself waking from the dream, and I began to climb with more purpose. We were on a mission. Unfortunately, one of my team mates had been quietly suffering from the increasingly bad effects of altitude sickness for over 2,000 vertical feet. The sun was getting hot when we stopped for a meeting. We had reached our turnaround time, though the crater rim was within a stone’s throw. There was little debate, though, as our team mate was breathless at rest, dry-heaving and had nearly fainted. What the hell were we doing there, over 14,000 feet? This mountain could crush us and continue on through the eons without looking back. We turned around at 07:00 just 300 vertical feet below the true summit. It wouldn’t be the truth if I said I wasn’t disappointed, but I know we made the right choice. As Ed Viesturs wisely said, “It’s a round trip. Getting to the summit is optional, getting down is mandatory.”

The descent gave us plenty of time to appreciate the mountain in daylight. Climbing down the Disappointment Cleaver itself, I felt myself becoming used to crampons on rock, and hopping over crevasses didn’t seem as intimidating as it had in the darkness. Crossing back over the ladder seemed even more ridiculous in the light. I remembered seeing a photo of climbers on Everest crossing a similar ladder bridge when I was younger and thinking I’d never do something that crazy. The snow was blinding white and the glaciers were blue, blue ice. Periodic rock fall around us kept us moving as quickly as we could. Thankfully, towards the end of our descent to Muir our sick partner was doing much better, though they were still not fully enjoying the trek. 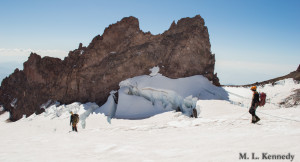 On the Ingraham Flats

We arrived back at Camp Muir after noon. I spent the afternoon lazing in the sun, filling out a Junior Ranger booklet and watching day hikers make ant tracks up the Snowfield. A helicopter ferried materials to and from Muir all afternoon for the construction of a new pit toilet. We were in bed by 18:00.

The next morning we rose early to watch the sunrise from the ridge next to Muir before heading down through the sea of clouds, back to the concrete world. In the distance Mount Hood, Mount Adams and Mount St. Helens looked impressive, glowing red in the early sun. Mount Rainier had defeated us and I was feeling humbled. Despite this, it was the rugged beauty and the awesome challenge that we came for; the summit was simply another point from which to appreciate these things. Since I had held my first ice ax last summer, the flowing glaciers, huge, gaping crevasses, cliffs of loose rock didn’t seem to hold the same fear for me. No, not the same sheer terror, but changed, into an awesome, respectful fear. Now, sitting in the city, I fiend again for that feeling of uncertainty, disbelief, of surreal adventure and impending challenge. I’m sure this addiction will soon find me back on blue glacial ice asking “what the hell am I doing here?”

2 Responses to How Mount Rainier Defeated Us