A Spring Ascent of Mount Garibaldi

Usually I dread waking up early in the morning, as I thoroughly enjoy my 11 hours of weekend beauty sleep, but this weekend was an exception. This weekend, I’d be climbing Mount Garibaldi. I jumped out of bed at 4:30am so that I could triple-check everything I was bringing and drown any thoughts of forgetting something. Paul rolled up to my house at 6am and shortly after, our driver, Clemens, showed up. To our pleasant surprise, Clemens had a truck with decently high clearance and four wheel drive capabilities. Our original plan was to go via Elfin Lakes, but now we also had the option of going via Brohm Ridge.

We hopped in to Clemens’ truck and I recommended that we grab some coffee. We could then take a look at the map and decide which route we should take. I also had some insider knowledge about the coffee shop we were going to. My girlfriend was working the morning shift and it was her last day, resulting in a high probability of receiving free coffee, which we did! Big shout out to Jae. Clemens and Paul had their first ever mocha, which would shortly develop in to a full blown addiction. We then mulled over the map and quickly noticed that Brohm Ridge was the much shorter route if we could get up high on the logging road. This was the route we decided to take. 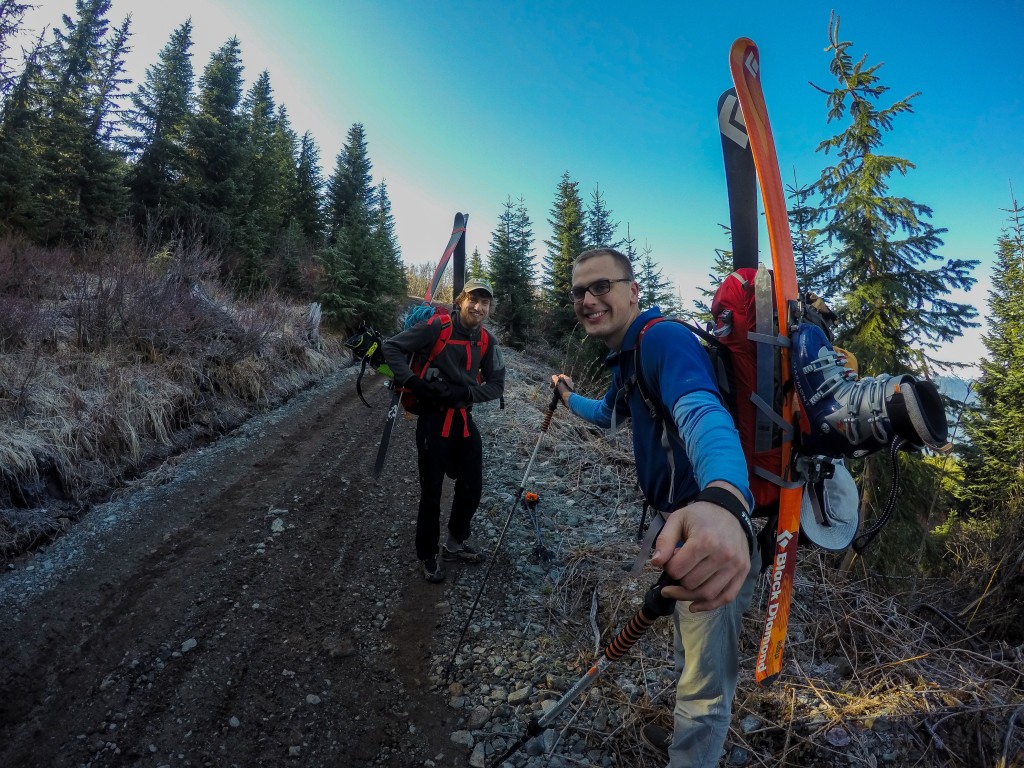 A splendid day for a slog

We parked at about 1200m on the logging road and thus began our slog with skis on our backs. I immediately became envious of the size of my two compadré’s backpacks. Dreams of the snowline began drifting through my mind, but after a mere 30 minutes, my dreams came true and we were able to saddle up. We passed by the snowmobiler’s hut (I personally think snowmobiler’s “resort” is more fitting) and were quickly on to Brohm Ridge. It was a perfect weekend to be out in the mountains. The sun was shining, the metaphorical birds were singing, and there were barely any clouds in the sky. 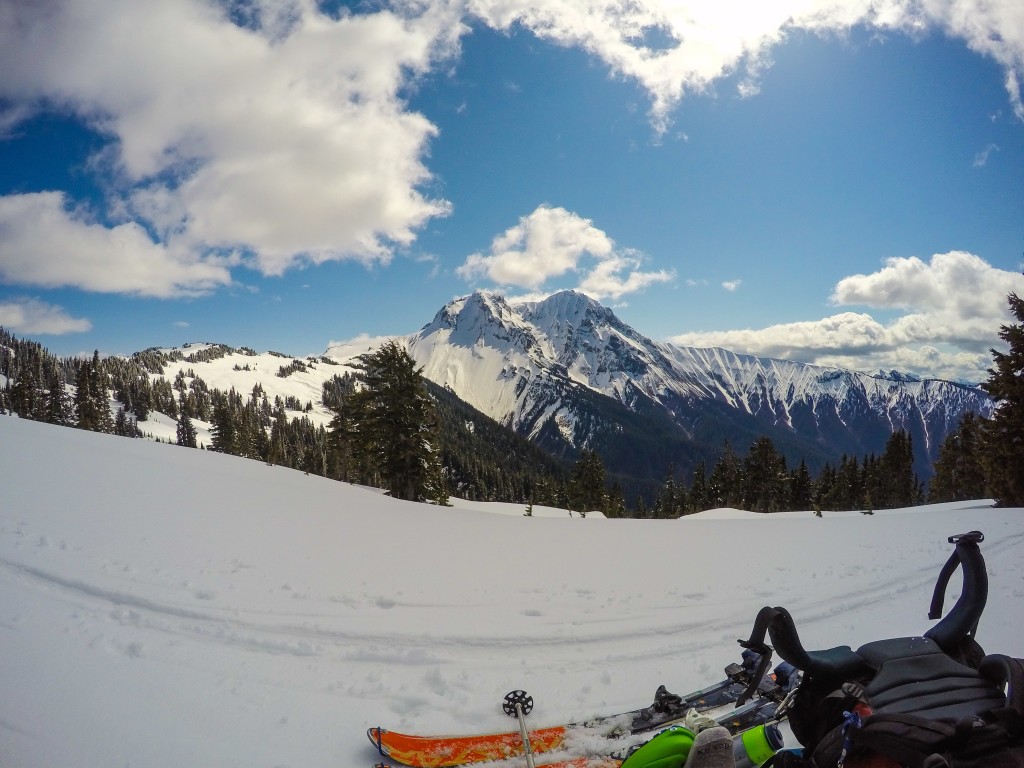 We took a break at the far end of Brohm Ridge, just before traversing on to the glacier. Then, a buzzing sound started emerging from the distance. It sounded like a massive horde of killer bees were homing in to our position. All of a sudden, a group of wild snowmobilers appeared beside us. I had never encountered snowmobilers before, but I had heard many stories. I tried not to judge, and thought to myself that everyone needs to share the mountain. They didn’t seem so bad, as long as you ignored the cigarette smoke.

When skiing on to the glacier, we decided to rope up as we were unsure as to what the conditions would be like. I had never skied while roped up before, and boy was I in for a treat. The snow on the glacier ended up being extremely hard-packed and icy, and the combination of this, wearing skins, and having an unlocked heal going downhill, made it absurdly hard (for me at least) to keep distance between Clemens and Paul.

We finally made it to our campsite at 2200m, directly below the northeast face of Garibaldi. We were treated with amazing views looking back across Garibaldi Lake, as well as an amazing sunset and a full moon. We packed it in early so that we could get up at 6am the next day. 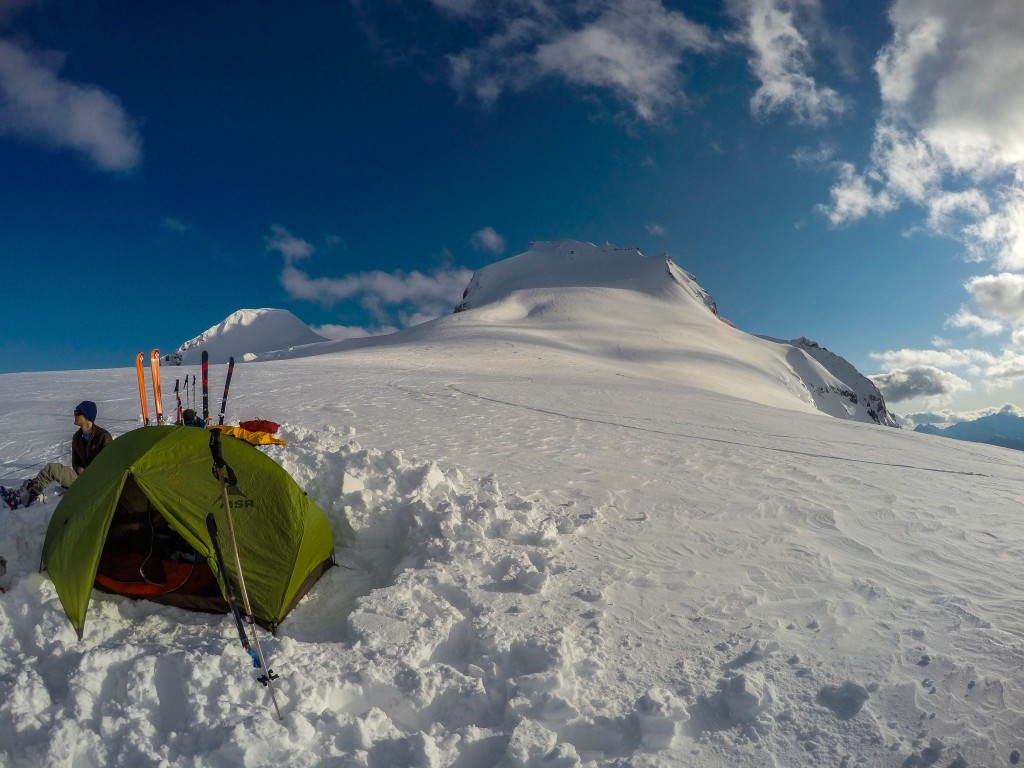 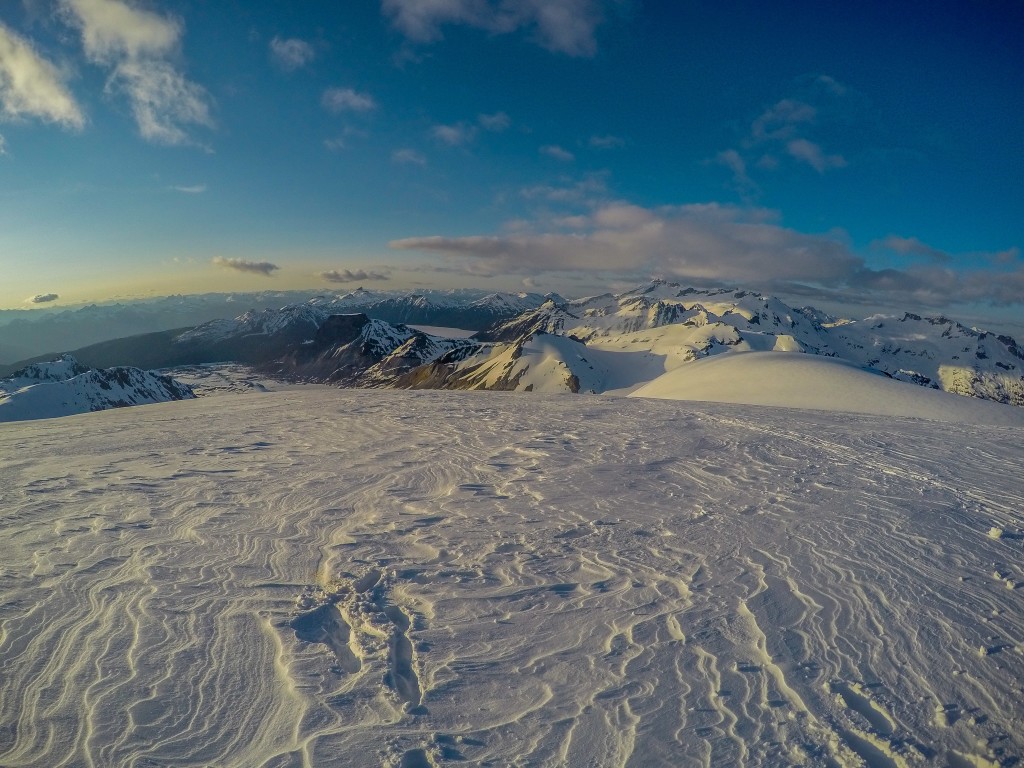 Towards Garibaldi Lake from camp 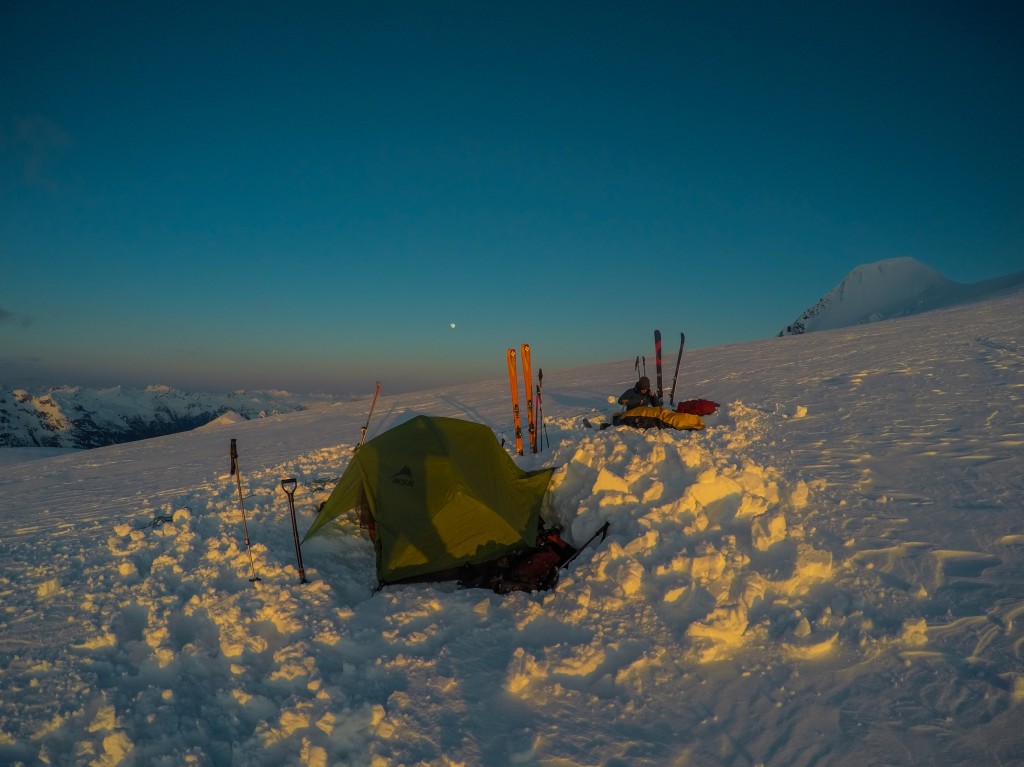 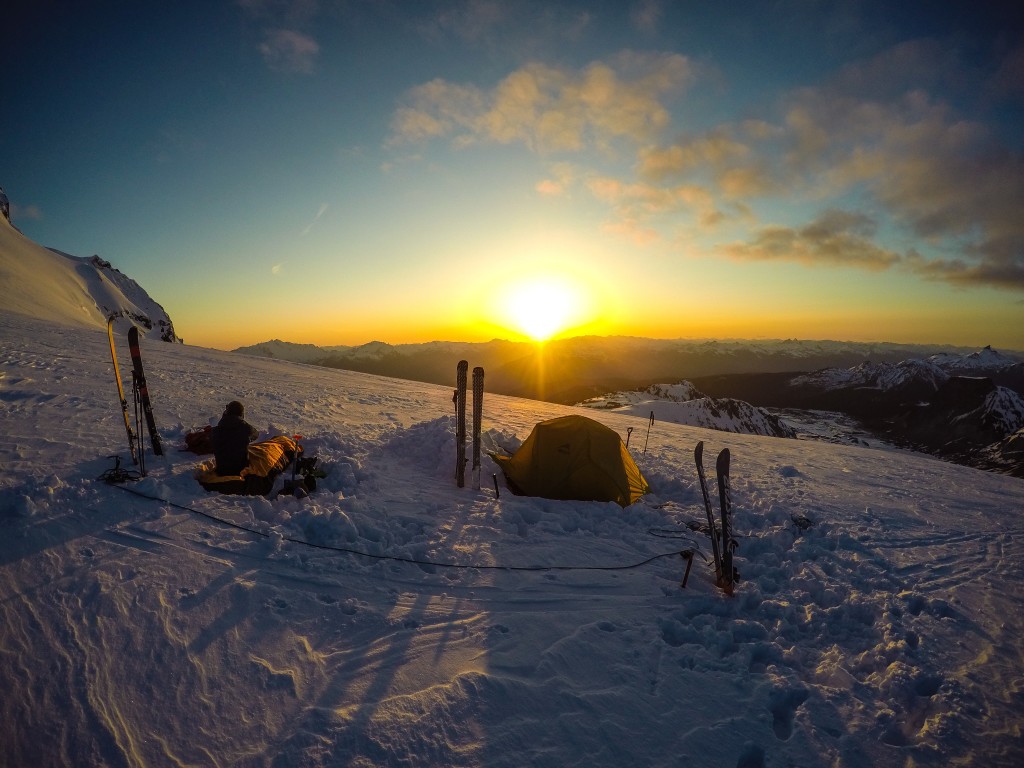 Summit day went by very smoothly. We were up by 6am and skinning up to the face by 7:15am. The bergschrund was slightly showing on the left, and there was a small cornice hanging over the left side as well, so taking a route up the right side of the face was our obvious choice.  A couple had skied up and down yesterday, so there was a nice crisp skin track and bootpack leading to the summit. We stashed our skis about 80m below the summit and used the bootpack steps the rest of the way up. It was the perfect day to summit; blue bird skies and not a cloud in sight. After taking in the views, we carefully descended down to our skis. Clemens made his ski descent look very easy, which gave me some false confidence. Paul displayed his excellent survival skiing skills back to camp. I went for my first turn and immediately flopped. To my dismay, I had forgotten to switch back to ski mode; a mistake I told myself I would never make again. Good thing we weren’t on more dangerous terrain. If my memory recalls correctly, Clemens described the snow as “buttery margarine,” and I would have to agree, although I always thought butter and margarine were basically the same thing. 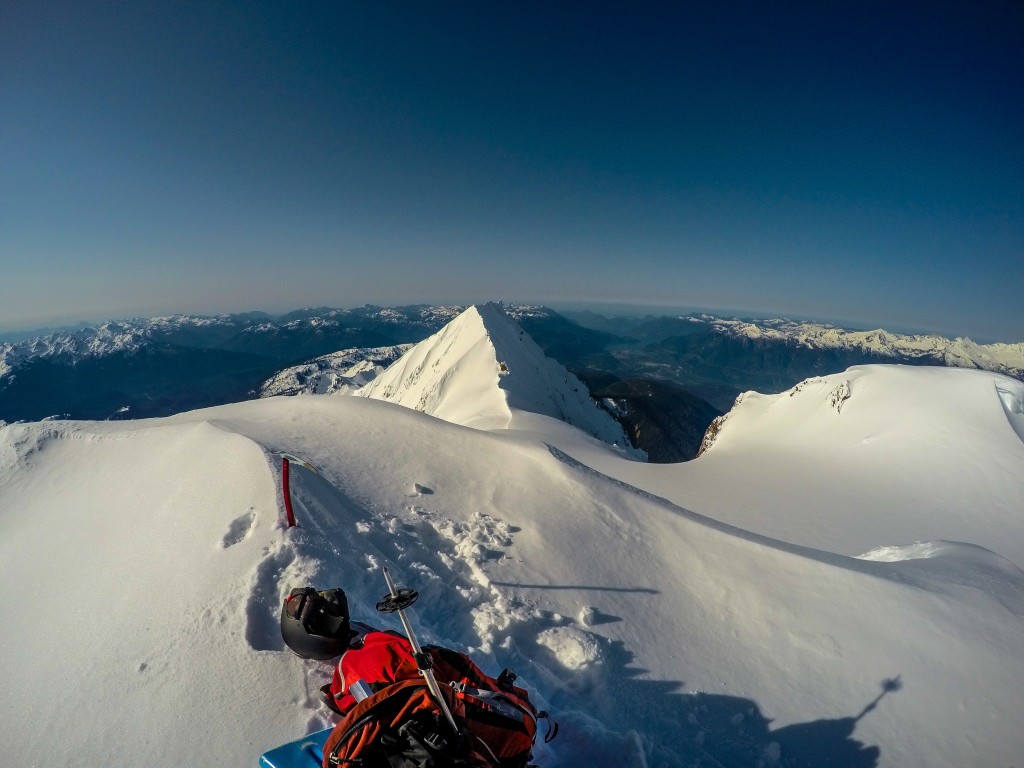 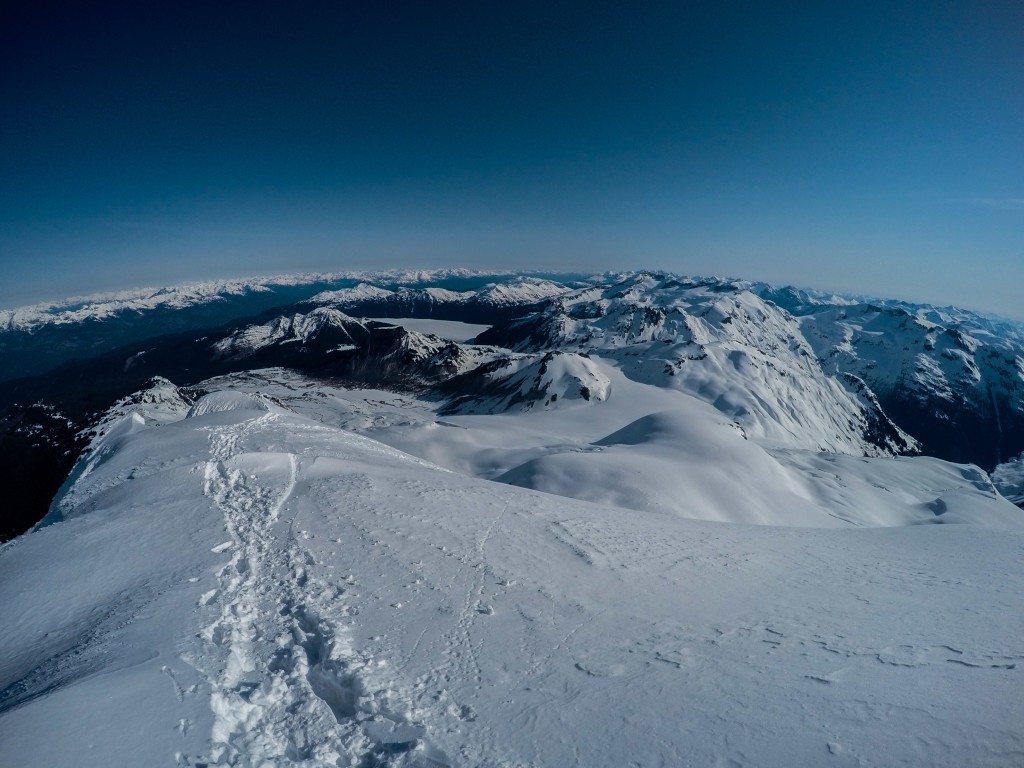 We packed up our camps quickly, burned off our remaining fuel, and skied out. The ski back was relatively uneventful, although I found myself cursing at those snowmobiler punks when we found the skin tracks to be totally chewed up on a steep side-hilling section. We made it back to the truck in one piece, with our only injuries being a few nasty blisters and some sunburn. We stopped for some Indian food in Squamish and then Clemens kindly dropped us off. All in all, it was a fantastic weekend with some with some first class fellows and I am very much looking forward to the spring/summer mountaineering season!

3 Responses to A Spring Ascent of Mount Garibaldi