Posted on May 1, 2015 by Agnieszka Grabowska

Galiano Island was one of the numerous destinations to see in Canada on my endless bucket list. At the beginning, it was supposed to be only a one-day trip. However excellent weather predicted for the weekend made me, Cora and Ayanna want to stay in the outdoors the whole weekend. We discussed a few options and decided to make a beginner-friendly, chilled out cycling-hiking tour on Galiano and Mayne Islands. For me, it was my second cycling tour, so I already had in my mind the image of cycling up and down some more and less steep hills. After all, I still hoped that the Islands’ roads would be gentle for us. 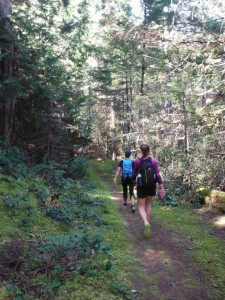 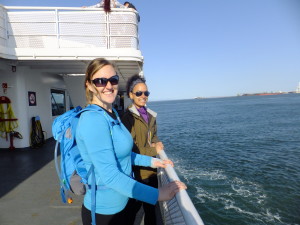 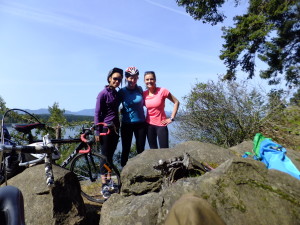 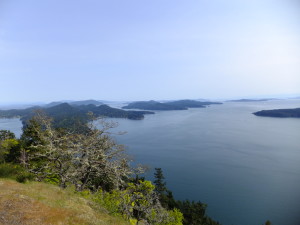 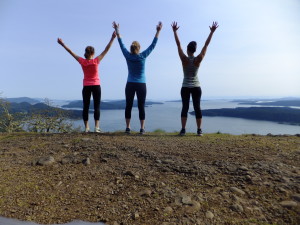 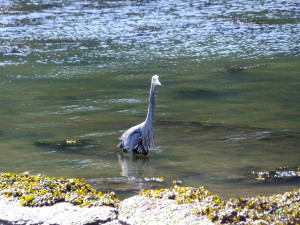 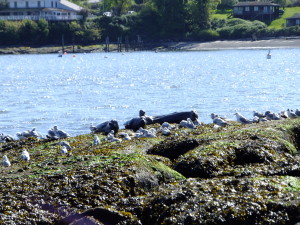 We packed our bikes in the back of Cora’s truck and set off on Saturday morning to reach Tsawwassen ferry terminal and catch one of the few ferries going to Galiano Island. We were driving with the sun rising up on the clear sky

The ferry ride was fabulous! Clear sky, seagulls as our companions, mountains in the distance and a good feeling about the coming weekend – it all made one of my best ferry rides ever!

We reached Galiano around 9h30am and set off to cycle all the way along the island on the hilly but peaceful road, 25km in total one way. We stopped on stunning viewpoints and had lunch on an almost abandoned beach, sitting on rocks and chatting. After lunch, we cycled back to the southern part of the island, with intention to hike Mount Galiano and later catch the last ferry of the day heading to Mayne Island. The plan was quite ambitious as we only had 2h left to the ferry departure and before that – a mountain to climb and a road to cycle to the ferry terminal. Optimistic enough, we accepted this challenge even though the time was short. Luckily the trail was easy and we hiked the mountain up and down in 55 minutes! (Ok, we might have even run a bit ). The effort was rewarded by an amazing view from the top of Mount Galiano, seriously – one of the best that my eyes have seen so far! Additionally, Mount Galiano’s approximate elevation is only 300 metres! We enjoyed the view for a few minutes and then headed back down the mountain to where our bikes were stashed. Once we reached our bikes, we sped up to get to the ferry terminal on time. For a moment I felt like we are in the Sufferfest 2: Desert Alpine… except for that we didn’t find any adorable puppy on the road.

Eventually, we got to the ferry terminal on time and took the ferry going to Mayne Island with only a few other passengers. After about 30min we reached the island, which welcomed us with a very steep hill. Mayne Island, as we later found out, is quite a hilly island, which we didn’t really expect, considering its small size. Cora, Ayanna and me came up with an idea of having an ice cream after this tiring day, so we headed up to the central part of the island in search of a bakery that was supposed to offer ice cream (this is what we read on the map). We found the place but it was closed, as was almost everything in the area (it was only 6.30pm…). Not giving up, we decided to come back the following day. We found a campsite on the Seal Beach and stayed there for the night. In the morning we enjoyed our breakfast while watching the seals lying on the rocks and took a few pictures of them. We left to cycle more around the island and went to the nearby park to hike a bit more. We had our lunch on the top of the hill, with a beautiful lookout over the islands around Mayne. After that, we went to the bakery and had the best homemade ice cream ever (Cora – her gluten-free brownie cake)! We took a rest and headed back to the ferry terminal and came back to Vancouver. The weather and good mood did not leave us till the last moment!