“ROCK!!!” Dmitri heard Marcin’s shout and looked up to see two potato-sized rocks coming down, quickly ducking below the overhang beside him. Not close enough to be scary, but close enough to hear the distinct whoosh as they tumbled through the air. Below us lay the blue waters of the Jervis Inlet and the impressive peaks of Marlborough Heights. Above us, the summit of Mount Churchill. We were finally close to our goal, the result of lessons learned during our first attempt a month ago, and of much slogging on the previous day.

A month ago, we took a Friday off in order to try to climb Mount Churchill, a 2000 m peak towering above Vancouver Bay, a 20 km paddle up the Jervis Inlet from the town of Egmont on Sunshine Coast. We, namely Marcin the “Giddy Instigator” and Dmitri the “Clueless Optimist,” were joined by Phil D the “Suspecting Victim” a few days before the trip. Phil decided to join mainly to remind himself why he rarely participates in silly adventures of this particular kind, while Marcin had earlier succeeded in convincing Dmitri this would be an interesting objective. A late launch coupled with aggressive bushes and attempting to travel via paths of least resistance resulted in completely failing to make it anywhere close to the planned camp spot at Churchill Lake, with no hope of summiting the next day.

As consolation, we bushwhacked instead to Marlborough Lake and were treated to a pleasant swim, lots of delicious berries, gorgeous views, and sunny weather. More bushwhacking returned us to our kayaks, after which we had a nice late evening paddle that got us back to the car at midnight, a day early. Dmitri, no longer cluelessly optimistic about the ease of travel through sometimes-dense prickly bushes, pledged that if he was to try it again, he would bring a machete. Not long afterwards, he purchased one.

To maximize our chances of success, we arrived at Egmont on Friday night before the BC Day long weekend and launched at 7am on Saturday morning. After 4 hours of paddling, we arrived at Vancouver Bay where our objective patiently awaited round two with Team Bad Idea. 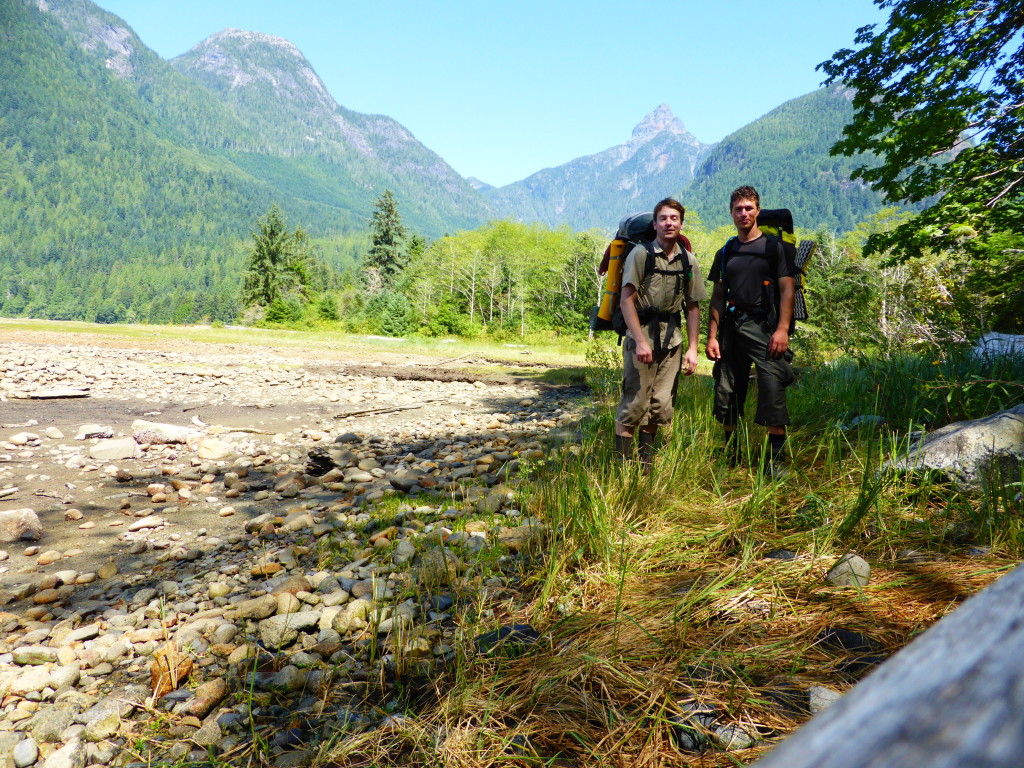 We landed, moved boats above the tide line, changed, and faffed with packing. As we marched up the logging road, we came across a bear who bolted upon hearing our voices. Reaching the overgrown section, we realized that the delicious berries were gone and the bushes were a lot less prickly, a pretty fair trade. After a bit of trail clearing through the worst part, Dmitri put away the machete for the rest of the trip.

Instead of trying to go up High Creek, which includes the outflow from Churchill Lake, we this time crossed the stream at the log jam at the end of the logging road and started the uphill slog through the forest. The time was 2:30pm. We had 1.7 km to go and 700 m of elevation to gain. After a few hours of pushing through and climbing over deadfall, the GPS showed that we had covered close to half the distance, but surprisingly little elevation. It was about to get a lot steeper. We spent next few hours picking our way through slabby drainages and bush-infested gullies, weaving between large slabs and trying to avoid getting cliffed out. Some of this involved pretty interesting scrambling with shrubbery as handholds, and climbing loose, rock-filled roots, with sometimes a surprising amount of exposure. 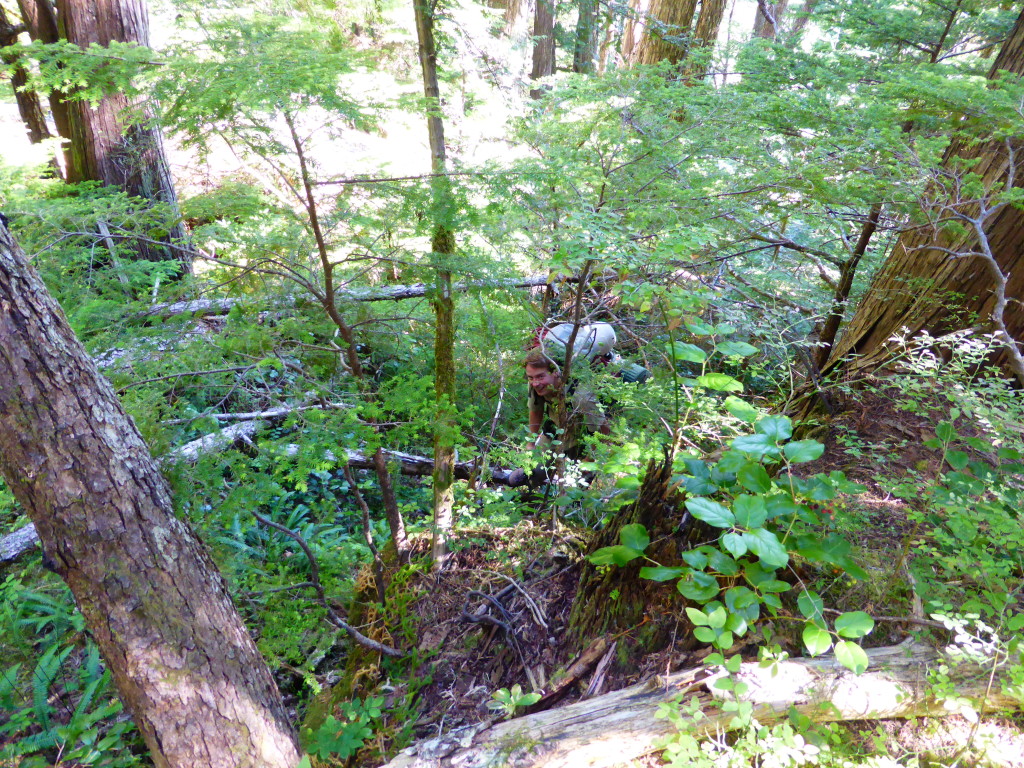 After a couple hours of such fun, both of us were happy when terrain started to flatten out. By 8pm, we reached a point that gave us amazing views of the summit tower and the nearby Marlborough group peaks, and for the first time the slog started feeling worthwhile. Soon the GPS showed we were within 300 m of the lake. Some 20 minutes later, Dmitri thought he saw some water reflecting the fading sunlight, but a closer look showed them to be light grey slabs. We realized we were looking at the slabby upper stream coming out of the lake, and they looked far more pleasant than the bushes we were pushing through. The open slabs led us to the lake and in another 20 minutes we had set up camp on the first reasonably flat section, tired but feeling accomplished. We were hopeful that the ridge wouldn’t be nearly as nasty as the approach to the lake. Once up the ridge, we could enjoy climbing the summit tusk. 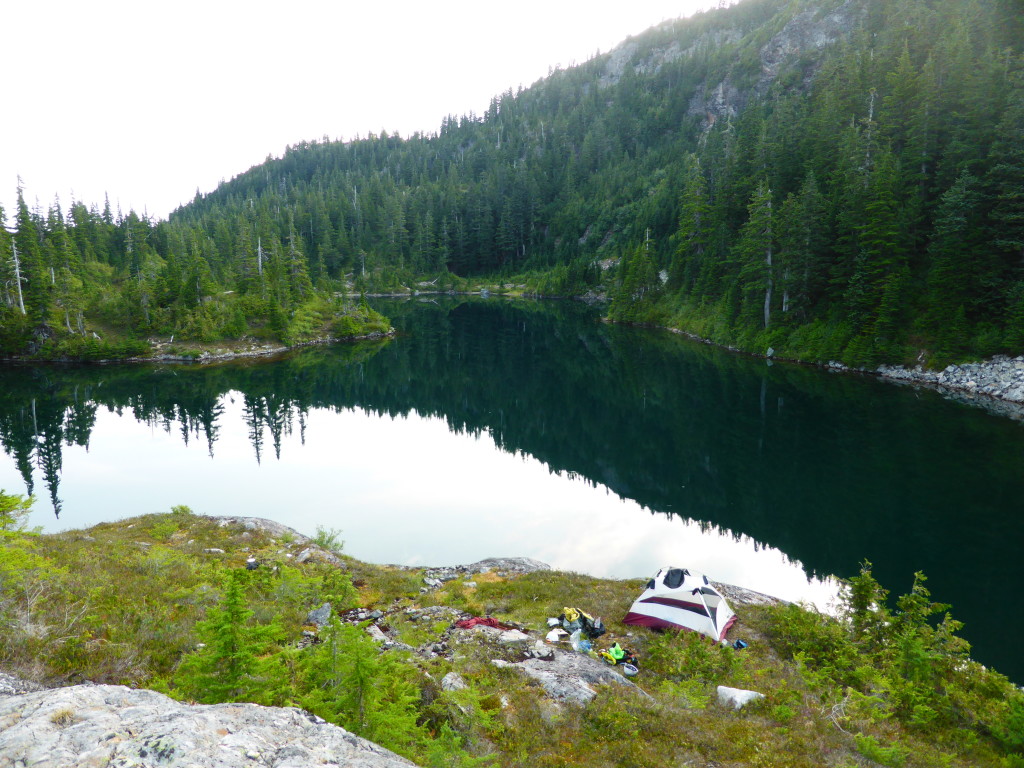 Sunday morning, we got on our way at a leisurely 8am after sorting gear and having breakfast. After a pleasant walk around the lake and many surrounding tarns, we pushed through a section of easy bush and reached the ridge. Following along and taking in the breathtaking views, we found ourselves at the upper lake just below the summit tower. Marcin wondered aloud why he had ice cream on my mind, and was informed that a call of “мороженое!”(ice cream) was one of the many unsuccessful methods Dmitri had used to try to wake him from his deep slumber in the morning. We had been going at a steady but moderate pace, so having plenty of time due to the early start was nice. As the rock face loomed over us, Dmitri wondered aloud “where do you climb this thing?” 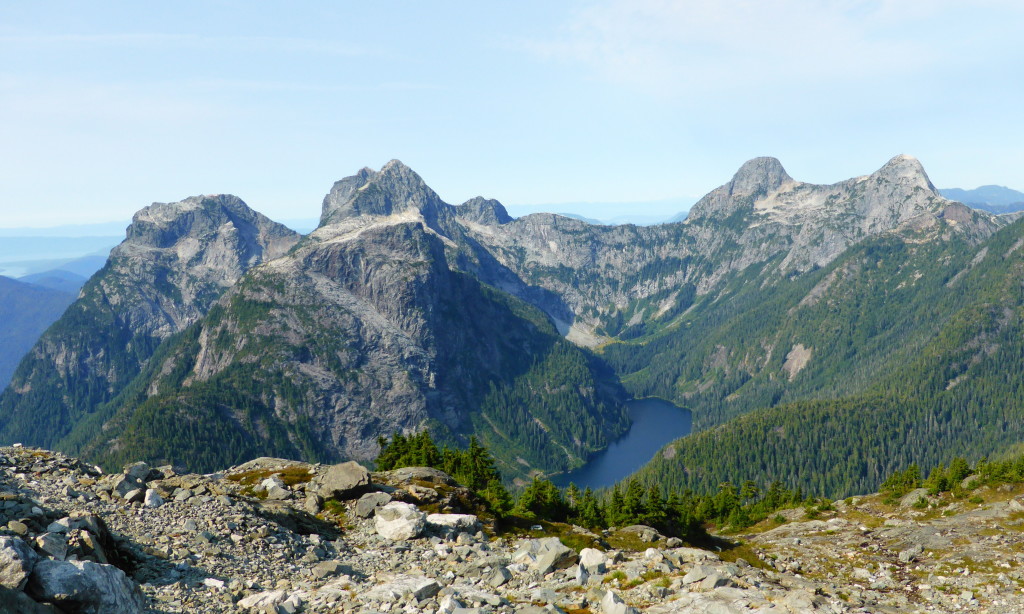 Marlborough Lake from the ridge

We found a lower angle section and scrambled to a ledge. Dmitri put on his harness, left behind some water and a bit of gear, and came up shortly afterwards. The scramble was about 12 m of exposed steep rock but the holds were good. Here after some faff with trying to find good pro, Marcin set up an anchor and led the first pitch. As luck would have it, this turned out the only section we needed to fully pitch out. Good placements were a bit sparse and we brought just a small rack. Four pieces protected the entire 50 meters, but there was plenty left for a nice anchor. Thankfully the grade was quite easy, with good holds and reasonable-quality rock. 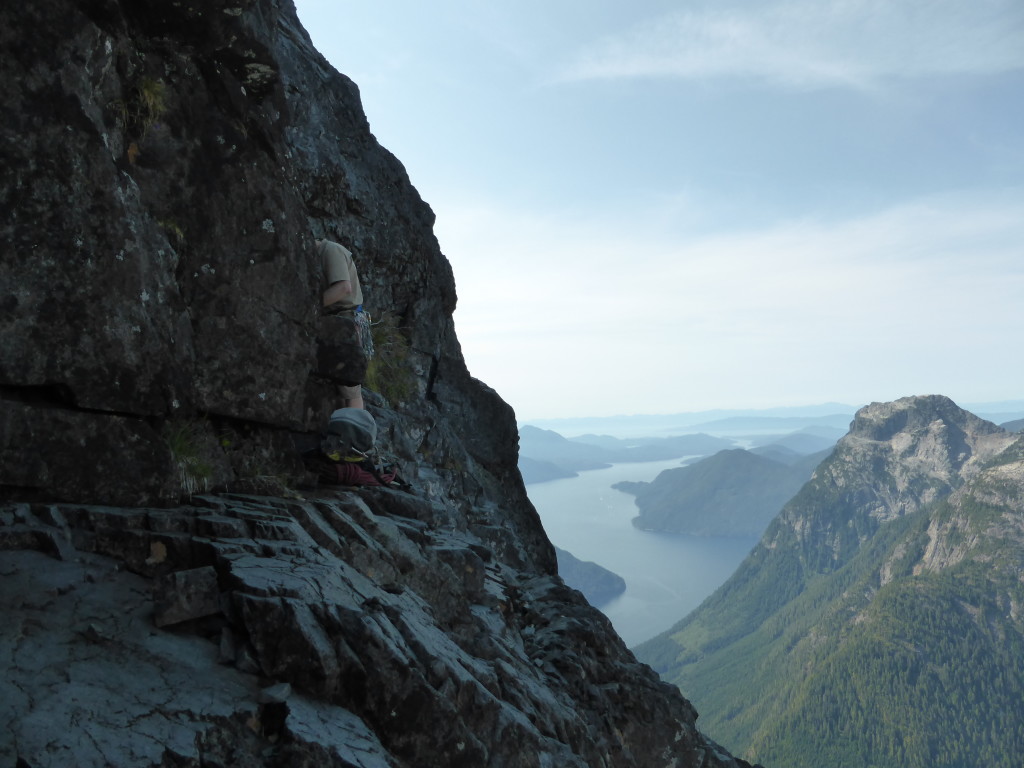 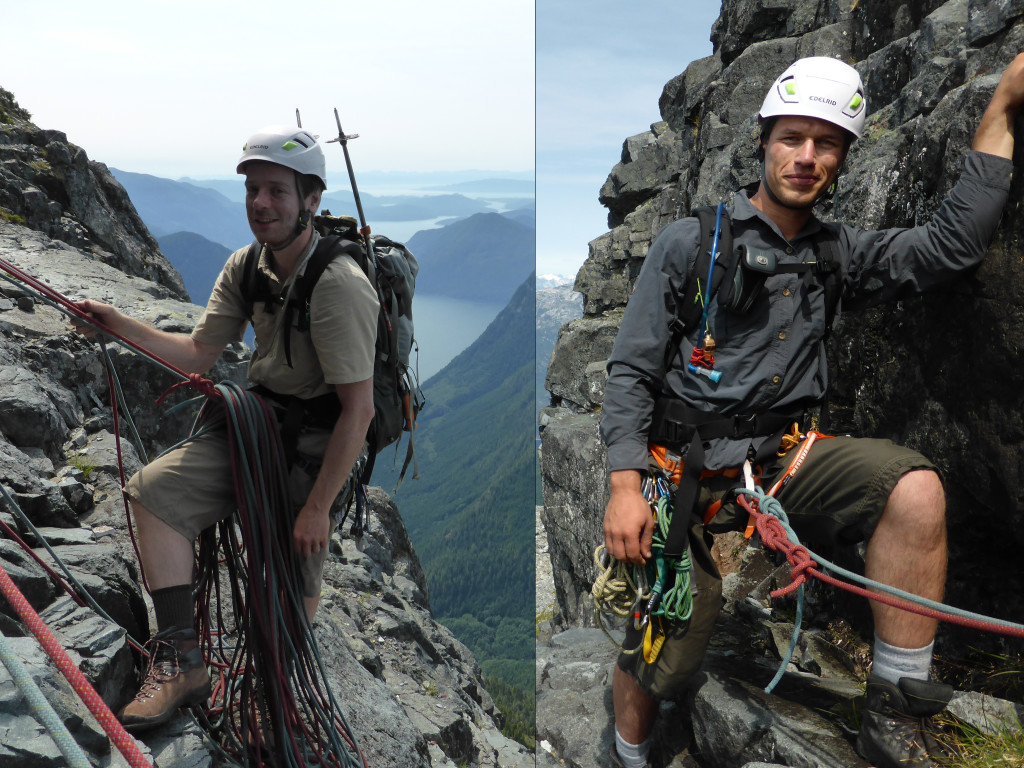 Belay station above the steeper portion of the headwall

After that we scrambled upward. The holds were for the most part very good, with lots of ledges, though all of it very exposed. Dmitri got a belay up in two spots where the exposure made things more intimidating. As the terrain continued flattening out, we thought we were approaching the summit ridge, but instead we reached a scree field with what looked like a second headwall facing us. After some scratching our heads, Marcin saw a route to the left and after scrambling over a few small ledges, we found a surprisingly easy line. The summit ridge was within our grasp, and after going around an ominous looking gendarme, we were standing on what felt like top of the world. We were both very happy to have made it, knowing that the hard work had finally paid off and that we wouldn’t have to come back a third time. The views were magnificent: the upper and lower parts of the Jervis, the impressive Marlborough group, Mt Diadem and Mt Alfred, and other mountains and ranges all around. 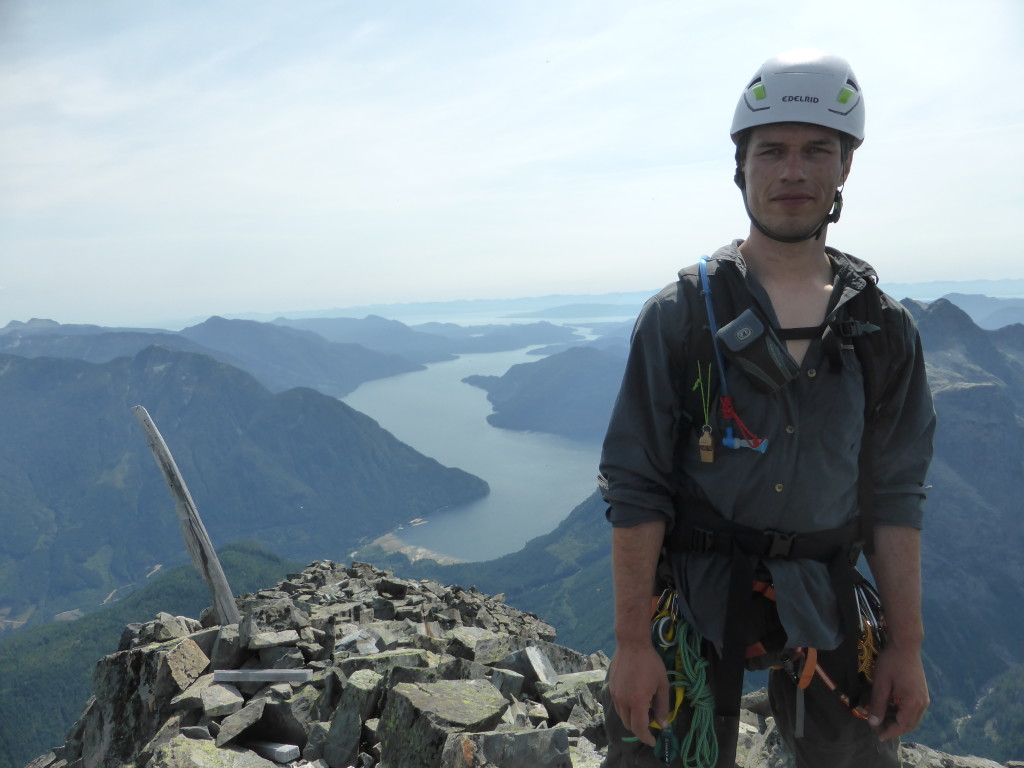 Legend has it that a giant Swede once climbed Churchill, but people did not believe his story, so he returned and put up a cross with mirrors on the summit that could be seen from far away. The cross now is broken with wire cable strewn about, but it was still neat to see. We ate lunch, during which Marcin almost sat on a small dead mouse, and started thinking about getting back to less vertical terrain before dark.

By that point Dmitri was very tired and a bit nervous about getting down in one piece. Once we got moving, though, it was actually very straight forward. On the edge of the giant scree ledge we set up a rappel from a tree and the rope reached another ledge with a tree. Then we got to the next ledge and the only thing that looked reasonable(ish) to rappel from was a massive block that was dubiously supported, but probably weighed as much as a truck. After many kicks and shoves failed to move it whatsoever, we figured it was trustworthy enough. It took 6 meters of webbing to sling it, and soon we were pleasantly surprised when the ropes reached bottom. Just like that, in 3 rappels we were off the tower. 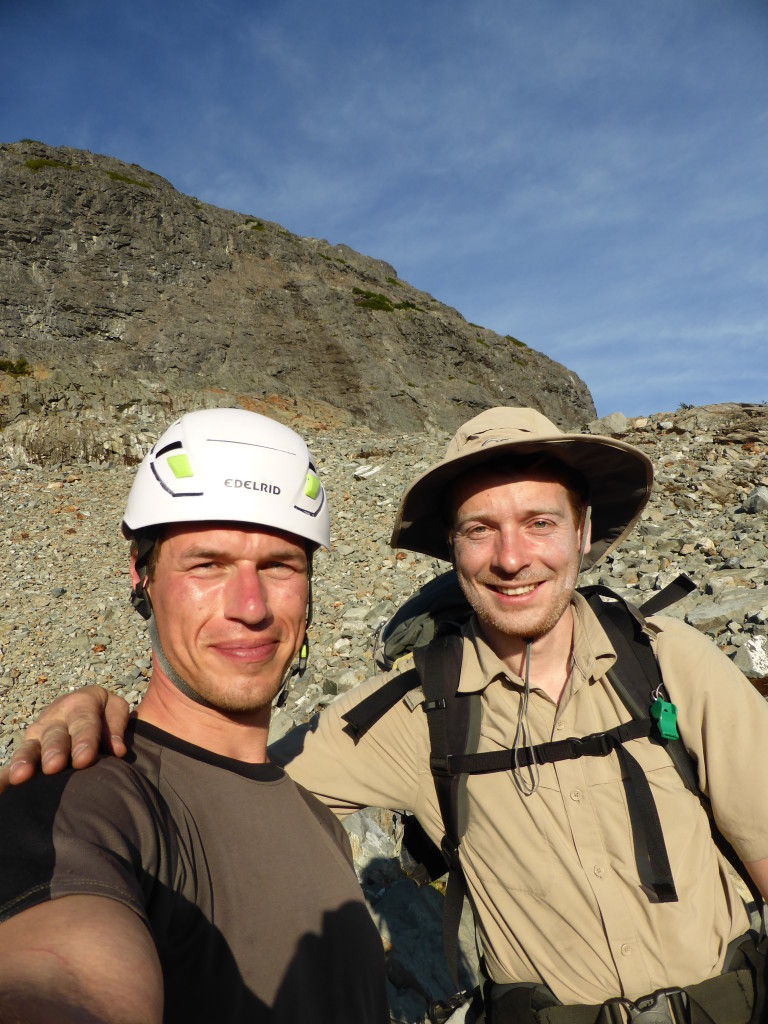 In front of the headwall 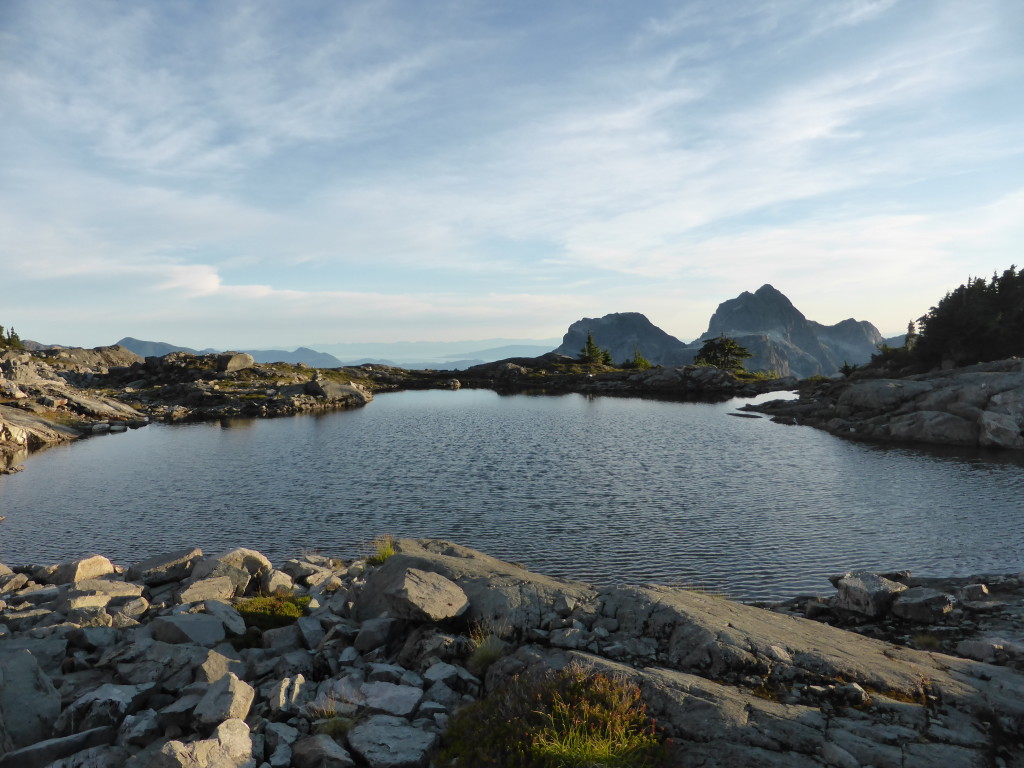 After packing, some high-fives, and taking more photos, we returned to camp the way we came, arriving at 9pm. The multi-flavoured instant mashed potatoes tasted terrific, and we were optimistic about the return route. For some reason, Dmitri had good cell coverage and managed to confirm with his brother that the last ferry would be at 9:40pm. With a 14.5 hour day on Saturday and 14 hours on our feet on Sunday, we felt we should still give ourselves plenty of time for the return leg of the journey in case we ran into unexpected difficulties.

On Monday morning we got up before first light, and just after 5am were on our way down the slabs. The plan was to stick to slightly lower angle terrain closer to the creek, longer but less steep than our route up. We made very efficient progress down the slabs, but eventually had to get into the forest when they cliffed out. Progress through the forest was good, until, with very little elevation and just a little distance left to reach the log jam we crossed on Saturday, we managed to get ourselves into a gulley with terrain to steep to comfortable sidehill on either side. Not wanting to climb a fair ways back up to look for an alternative route, we continued down into the canyon and followed it until it boxed in and went from mostly dry to mostly wet.

We found a ramp on the opposite side and decided to climb out. The first part was easy, then we had to traverse a scree ledge below an overhanging roof that was low enough you had to crawl on your stomach. Marcin managed without issue, but Dmitri had his most unnerving moment of the entire trip when he started moving up, had his pack catch the roof, and felt like he might tumble off the ledge down to the canyon floor 5 m below. After some cursing, he crawled up to a safe spot while Marcin, on dubious footing himself, could only watch. Happy to be in one piece, we continued and the rest of the climb out was straightforward.

After some moderately annoying bushwhacking we reached the Marlborough Creek fork of the logging road, near where we camped after our first attempt went sideways. From there it was a glorious straight forward march back to the boats, and by noon we started the final leg of the return journey.

Apparently the bushwhack wasn’t enough, as nature decided to spice things up with a nice headwind that made the first hour feel like we were standing still. With our early start we had time to spare before getting on the last ferry became a concern, and after a while the wind eased. We eventually reached Egmont, after paddling through some pleasant chop and small current rips on the final stretch. The return paddle only took us an hour longer than on the way there, and we even had time to take a cold shower and try to catch an earlier ferry.

We returned to civilization exhausted but victorious, after a trip that felt like a proper adventure in a fantastic place with good company.