Posted on August 5, 2015 by Elliott Skierszkan

At 2915 m, Whitecap Mountain is the crown of the Bendor Range and one of the taller peaks in the area surrounding Vancouver. It caught my eye on the Labour Day weekend of last year, on a trip to the Waddington (Phelix) Hut in the neighboring Cadwallader Range. While scrambling up the wet granite of Mt. Gandalf’s slopes in a rainstorm, the clouds briefly parted and Whitecap was visible to the northeast. It stood out remarkably on the horizon, not because of its prominence but rather because of its glistening peak which was covered in a dusting of fresh snow, standing out remarkably in contrast with the gray peaks surrounding it that were all below the freezing level.

Fast forward a year and my old friend Alex from Prince George was contacting me to make some summer trip plans. We were exchanging trip ideas somewhere “north” of Vancouver, and “south of Prince George”. I tossed the name Whitecap as this mountain I was interested in visiting, and the project materialized. VOC’er Robin F. and I had also been talking for some time about exploring the mountains around Gold Bridge, and she was keen to join. The crew was completed by my girlfriend Emily, just back from a month “back East”, and Ashlin; an old housemate of Alex and I from our Ottawa U days, who was visiting BC for the first time.

Whitecap is no easy peak to get to: it lies in the middle of the Bendor Range and a fair hike from any access point. A bit of online research told me that as of five years ago, the Kingdom Lake FSR was in excellent condition and provided a reasonable access point. The most recent edition of the backroads road atlas had the road listed as “overgrown”, and a scribble of a trail heading into the alpine. But who trusts the backroads atlas anyways? Some perusing Google Earth showed a grown-in logging road heading SE from the Kingdom Lake FSR up towards McGillivray Pass. From there we aimed to reach the alpine and pass over a col south of Mt. McGillivray before dropping into the Connel Creek drainage basin, from where the western slopes of Whitecap Mtn could be ascended. Reading old trip reports on Clubtread, along with the more recent tales of Neil Mackenzie and Piotr Forysinski (see Neil and Piotr’s TR in VOCJ  57) also gave indications of a thriving grizzly population in the area. Bear spray was a definite part of the gear list! 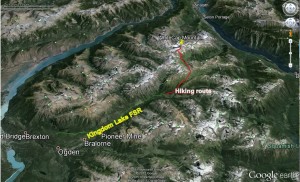 The approach planned from Google Earth. Click to enlarge.

After this planning, on the evening of the last day of July I found myself in a car with Robin, Emily and Ashlin en route from Vancouver to meet Alex (and the two dogs he was dog-sitting) at the store in Gold Bridge. We made good time heading up the Pemberton Valley, where smoke from the massive Boulder Creek Fire accumulated and gave us an incredible sunset panorama. Heading up and over the Hurley FSR, we got to Gold Bridge before Alex and played cards under the General Store’s lights for twenty minutes until he arrived. After exchanging greetings, I hopped into Alex’s CRV and we headed towards the Kingdom Lake Rec Site to camp for the night. We waiting around the corner for the three girls to follow in Robin’s Subaru, but they weren’t following … We doubled back only to find out that her car’s gear box was stuck in “park”! Having driven long distances from Vancouver and Prince George to make this trip, we weren’t about to let this get in the way of our trip, so we quickly decided to pile into Alex’s CRV and drive up to Kingdom Lake, and deal with the Subaru on Monday. Five people, five packs and two big dogs make a good case for the CRV’s spacious interior! 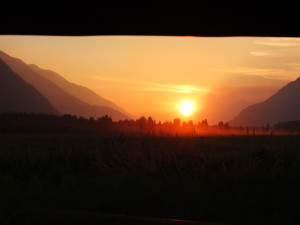 Saturday morning, we awoke to our second car problem of the trip: a flat in Alex’s rear tire. He quickly swapped on his spare tire and we drove up the Kingdom Lake FSR, finding it in excellent (2WD) condition and even spotting a moose and calf up ahead. As we ditched the car near Piebiter Creek and started on our route, we hoped that we wouldn’t strike out on car breakdowns for the way home! The only point of confusion was a sign posted by Whitecap Alpine Adventures at the start of the logging road: the map on the signpost clearly suggested that we were at a trailhead near Standard Creek, when in fact our GPS, maps and vehicle odometers gave us reason to believe we were at Piebiter Creek, more than a kilometer away. Whoever put that signpost up apparently didn’t know where they were or was trying to confuse snowmobilers so that they would get lost and not track out the ski tenure … 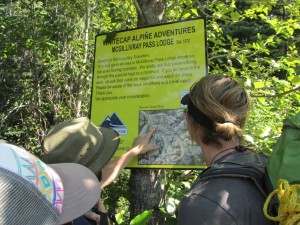 The old logging road leaving the Kingdom Lake FSR was easy to follow and alder was fully manageable, providing a pleasant alternative to the bushwhack that I had been anticipating. After some easy walking through nice forest, we emerged into subalpine meadows near Standard Creek, passing a few abandoned cabins along the way. I recall from reading one TR that one of these cabins was an old VOC hut that was abandoned after sinking into the marsh (is that true?). We trudged along, losing the faint trail in the marsh and trying not to sink ourselves, either. 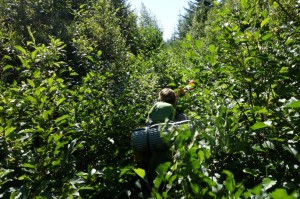 No logging-road accessed hike can be complete without some encounters with slide alder! 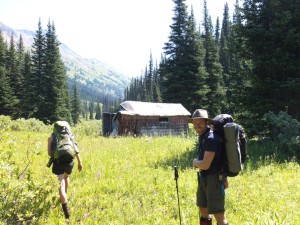 Abandoned shacks in the swamp in Standard Creek valley.

After some wet bashing through the willowy swamp, Robin, Emily and Ashlin called out that they had found a trail a bit higher up. We followed this very nice trail for a while, before crossing over Standard Creek and ascending the steep grassy slopes below Mt. McGillivray. Shouting and singing to keep the grizzlies at bay seemed pretty effective as we never saw any of the teddies, but a large area of flattened grass and freshly dug up soil told us we weren’t far from their den. We had lunch by a snowpatch which provided much needed relief from the hot temperatures and entertainment in the form of a snowball fight. Making our way up the slopes, by late afternoon we were at the col below McGillivray, and decided it was worth a quick side-trip to its summit long the south ridge. The summit views were stellar, looking down at small glaciers to the north. We also spotted the backcountry ski hut at McGillivray lodge, and admired the great terrain available to those willing to pay a good buck for accommodations at the lodge.

On our way down from the McGillivray col, we stumbled on a very good horsepacking trail which we followed in the late afternoon light. Shortly before dark, we found a little lake tucked below Mt Piebiter, which we would use as our base camp for the weekend. A quick dip in the water allowed us to clean off and be presentable for a delightful dinner on the shores of the lake, where reflexions of Whitecap painted a scenic background to our meal. Easy scrambling up the summit ridge of Mt. McGillivray 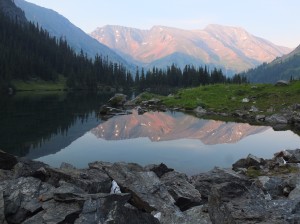 On Sunday morning we had a quick breakfast and trodded down the valley towards our objective, passing a horsepacker’s camp along the way. We managed to avoid losing too much elevation by contouring above Connell Creek until we reached the steep grassy slopes of Whitecap. The entire morning was spent delightfully walking along incredibly lush alpine vegetation. We huffed and puffed our way up the lower slopes of Whitecap, which neared 40 degrees before easing off to gentler, rockier terrain higher up. The discovery of yet another cabin

We ate lunch by a snowpatch at the summit ridge, and continued along. For such a large mountain, the going was surprisingly easy as ascended the rocky slopes with little technical difficulty. By 2PM, we were on the summit where we enjoyed fantastic views. Prominent glaciated summits were visible to the west, while to the northeast the brown and dry peaks of the Chilcotin were visible. Remarkably, we could even make out the Black Tusk, 100 kilometres to the south. Everything was shrouded in a haze, presumably due to the intense wildfire activity this summer. After lounging on the summit for an hour, we began our long descent, which was overall uneventful. The highlight on the way down was definitely a drip under the cold cascading waters of Connell Creek. The dogs were also thrilled to give their paws a break once we descended from the rocky summit and back into softer alpine meadows. Summit group shot! The dogs have definitely had enough by this point. A summit massage train was held to the pleasure of weary hikers. 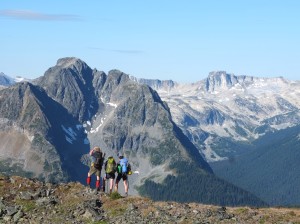 Alex, Robin and Ashlin. Mt. Weinhold in the front, with the dramatic north cliffs of Mt. Aragorn and its small glacier behind, to the right. Gandalf is hidden behind Weinhold. There was lots of this going on: Blissful tramping through the lush flowery alpine

Back at our camp by evening, we enjoyed a déjà-vu of Whitecap’s reflexion on our little lake, which was just as pretty as the day before but perhaps more meaningful knowing that we had spent the day getting all the way up there and back.

Monday morning dawned cooler and crisper, providing even better views for our hike out. Now I could admire the dramatic north cliffs of Mt. Aragorn and the Tolkien Group, from where I had first spotted Whitecap some months ago. On our hike out, we managed to find a horsepacking trail which made the going much easier, as most of the hike involved contouring on steep grassy slopes which is challenging without a trail. We managed to bypass the willowy swamp, instead enjoying the pleasure of a beautiful shady forest on an excellent trail that eventually connected to our overgrown logging road. For future reference, this trail is by far the best way up! Watch for some flagging on your left as the small trail joins the logging road a few kilometers from the Kingdom Lake Main FSR.

Getting back to the CRV by mid-day, and happily noting that all the tires still had air (phew!), we drove back to Gold Bridge where, upon consultation with a collection of locals, it was determined that there was an electrical problem preventing Robin’s Subaru from getting out of park. Somehow, jiggling with a black box of electrical wires coming from the brake managed (after several minutes of trying) to set us free! That was a relief, given that getting back to Vancouver from Gold Bridge without a car would mean hitchhiking all the way up and over the Hurley back to Pemberton, and then finding a ride home from there. Instead, we were able to drive, just making sure to leave the car in neutral every time we shut it off!

Sad to say goodbyes, we left Alex and the dogs on the shores of Carpenter Lake after a refreshing swim in its aqua waters and set off back home. The trip back somehow took upwards of ten hours, apparently an accident on the Sea-to-Sky meant a gridlock from Whistler to the Lion’s Gate.

With great weather, this was a phenomenal hiking trip which I highly recommend. It was great to have the company of visitors from Ottawa and from Prince George for the trip, and to have the whole grassy and flowery alpine valleys to ourselves for the whole long weekend. A surreal trip which left us all wishing we had more time to continue exploring the gorgeous and quiet mountains around Gold Bridge.