Hello. How about that ride in? I guess that’s why they call it Marble Canyon. Haha. You guys might not know this, but I consider myself a bit of a loner. I tend to think of myself as a one man wolf pack. But when the VOC posted the Daughters of Ice trip I knew it was going to be a game changed! First my wolf pack, it grew, it grew by one; when I talked to Matt at the pre-trip. So there were, there were two of us in the wolf pack. I was o- i was alone in the wolf pack, and then Matt joined in later. And the morning of the trip, when I loaded mine and Casey’s gear into the car, I thought “wait a second, could it be?” And I knew more wolves would be joining our pack, first we picked up Dakotah, then Rachel (easily the most fashionable person on the trip- gear matching on fleek), then Shane… and at that moment I knew I was about to add a bunch more people to my wolf pack. 16 to be exact, 16 of us wolves, climbing around the ice together, In Marble Canyon, looking for awesome climbs and fresh Ice. So tonight, I make a toast. A toast to all my wolves that shared the Canyon with me on the fateful February weekend!

Daughter of Ice is the VOC’s yearly introduction to the glorious world of swinging sharp things at ice. It was the perfect opportunity to learn how to climb ice with tons of rad (and free) instruction, tips and tricks from some solid ice veterans! This year the trip was held over the February long weekend at Marble Canyon, outside of Lillooet. Although it was a 5 hour drive from Vancouver, Marble Canyon was ideal for learning to climb ice, as the ice reliably forms and top-ropes were able to be set up with minimal gear.  Three cars left Vancouver on Friday afternoon,  while the final car (my car) left bright and early on Saturday morning. We were all set up with a perfect car camping set up for the weekend, only a 5 minute walk from the climbing area. Upon arrival on Saturday morning the crew already had four separate routes set up (which were cleverly named including: Icy-B-C & And No Deductible) which was awesome as everyone was getting climbs in. For myself and Casey, this was the first time we had ever climbed roped. We had tons of help along the way; especially from Dakotah & Matt who explained everything in detail; right from basic knot tying to how to belay. After a long day of climbing we retreated to camp and all cooked epic meals that were far superior to our normal backcountry freeze dried cuisine; the beauties of car camping. 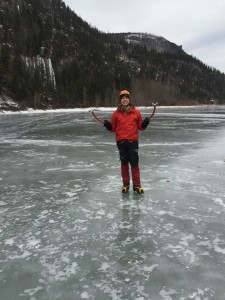 On Sunday we cooked breakfast (mhhhmmmmm Bacon) geared up and ventured back to the climbing area! We had a similar number of ropes set up which again allowed for maximal climbing enjoyment! On Sunday we had set up a rope on the upper (second of three) pitches! This was an excellent area to further learn under the instruction of Julien & Caitlin! Everyone got 2-3 climbs in on Sunday and the weather could not have been better! We had the Ice all to ourselves! After an evening of relaxing and feasting about 7 folks split from camp and did some night climbing!

We woke up on Monday to find several other groups headed over to the ice. Needless to say we quickly packed up our gear and headed over as to not miss out on a final day of climbing! And we climbed!!! The highlight of Monday was when I was being lowered after climbing the second pitch and I put my leg through a thin part of the ice column into a waterfall. We climbed until around 2 pm, loaded up our gear and headed home! What a perfect long weekend! Thanks so much to everyone that came along and made this trip so rad! 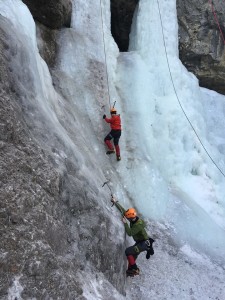 This entry was posted in Climb, Trip Reports and tagged Beautiful BC, ice climbing, Marble Canyon. Bookmark the permalink.