Whitewater is under-represented in VOC. Hopefully this will change. A few of us are devoted to it. Nobody really talks about it. I don’t even know if anyone is interested in it. There aren’t really any trip reports. This is partly because so few of us do it, and partly because we don’t take pictures of it when we do do it, and when we do, they’re with wet/foggy lenses from bad perspectives. I think our Valentine’s trip on Hagen creek is epic enough to tell about, despite our lack of photos. So, have a whitewater trip report.

On Valentine’s day a crew of us from Vancouver and Bellingham–two of us from VOC–woke up from an IPA-fueled crash in Portland. It had been raining hard for the past few days. All of the classic Portland area steep creeks were blown out. We would have to find something higher, smaller, and less frequently run, if we were gonna get down anything on Valentine’s.

Luckily, some locals hooked us up with beta. A friend of a friend named Whitney wanted to get on Hagen creek, which is a constricted class V up a logging road in southern Washington. Hagen drops into the North Fork Washougal, which is a continuous class IV. When there is enough to water for Hagen to be in, NF Washougal is flooded out, which means it’s rowdy, non-stop, and white knuckle.

So, with minimal information about what to expect of Hagen creek, aside from “the flow will probably be low” (it was quite high), we– Josh, Alicia, Rose, Kevin, Gibran, Joni, Whitney– met up in the pouring rain at a lovely ‘murican convenience store that sold potato chips, beer, and guns on the bank of the Washougal River. We put on drysuits and loaded boats, then drove up the logging road along the Hagen gorge. We hiked down a trail we would have never found without Whitney, and after twenty minutes of sliding down mud slopes carrying kayaks in a rain storm, we found ourselves beginning our Valentine’s date with Hagen creek.

After some class IV mank down some sloping ledges, around logs, and through boulder gardens, we got to the first drop named Hagen Daaz, which was a beautiful sloping 10 footer into a small pool. The only catches are: 1) The tiny pool drops immediately into more class IV which is full of wood (danger,danger); and (2) Hagen Daaz is unscoutable.

Whitney goes first, showing a few of us the line– boof off of the right bank. Alicia goes second, and the line shifted a little left. Rose goes third, and the line shifts a little more left. From above, Alicia and Rose made their further left lines look perfect. It turns out they both found a hole not visible from the top, and Rose in addition found a rock not visible from the top, which she pitoned. The net result was skinned knuckles and a cracked helmet for Rose. The rest of us blindly followed with better luck, still having no clue that left was bad, but luckily running more right. Kayaking is sometimes not forgiving.

More class IV ledges led into the next class V drop Euphoria. This one is a pretty technical 10 meter slide into a 10ft drop with a shallow landing. We scouted. Whitney took it for a ride and got upside down in the crux of the slide. Two-thirds of the way down there is a ramped up flake which rockets you into the air over a few holes. He landed a bit sideways from the air-time and paid the toll. Just before the hammering which would result from running the 10 footer upside down, he rolled up for a quick boof. He hiked back up and took a second lap to run it clean. The rest of us fired it off clean. Euphoria was my favorite. It was quick.

We headed down, passing a few side creeks. It was still pouring rain. The creeks were adding a lot of water, and Hagen was getting bigger and more consequential as time passed, so we felt a bit of a rush to keep moving.

The next significant drop was Teakettle, and the high water was very evident by the time we got here. It looked like a great place to trade mistakes for hardships. There is a small slide followed by a 10 or 15 foot sloping ledge. A few people walked around. The rest of us went at it with varying success. The standard line is to start right down a small slide, then drive hard left above a few dangerous holes to boof down the 10 or 15 footer into an eddy. There was too much power in the high water flow for this right-to-left move, so we pursued alternatives.

Whitney and I went for right-then-middle, which involved punching a furious hole. Whitney cleaned it. I didn’t have enough right-hand angle to punch the hole, so I got typewriter surfed from one end of the hole to the other in about 0.5 seconds. The curtain landed on my back deck and insta-flipped me as if a car landed on the rear end of my boat. This whole process probably took a second, and left me a sore back the next day. I rolled up and caught an eddy without grace. Joni and Gibran went for an even more risky right-then-right line. The far right-hand side has a terrible room-of-doom where the curtain shoves into a box formed by rocks directly at the bottom of the drop. A kayak properly chocked in there would crumple and pin to the bottom of the creek probably permanently with the force of mountains. Joni cleaned it with a perfect boof off of the flake, landing directly beside the room-of-doom. Gibran went slightly too far right and had a violent piton on the edge of the room-of-doom’s guard rock– front-flipping away from it. His boat gained a sizable bow dent, and he was a bit sore later, but no broken ribs or ankles, which was good. “Send it!” 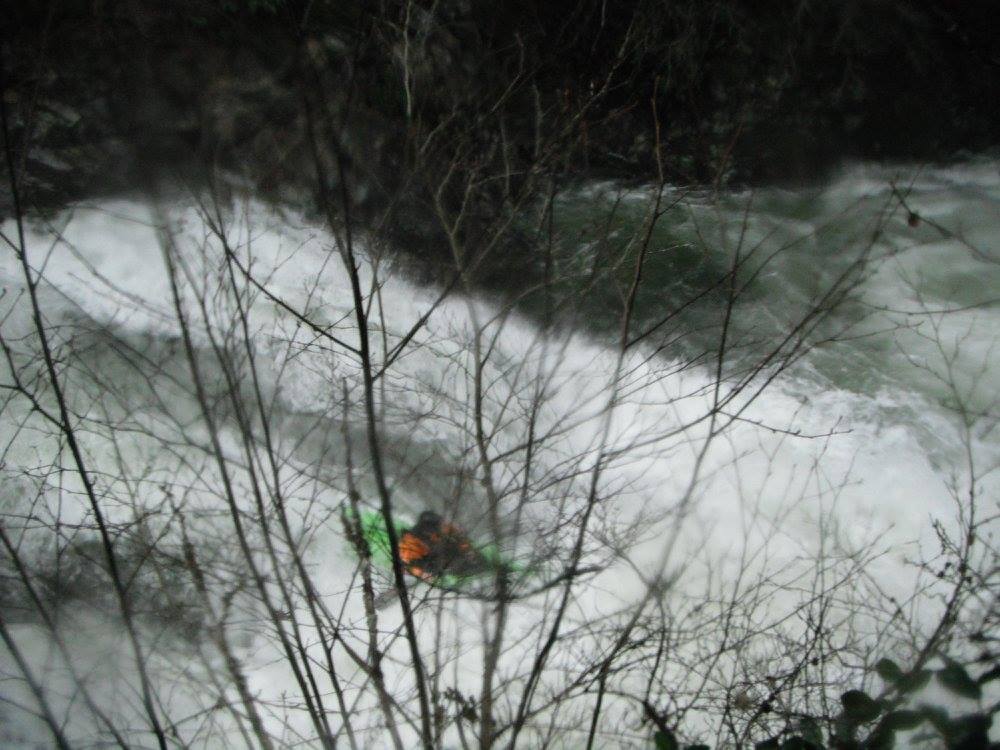 Whitney and a lot of water

At this point the creek joined up with the North Fork Washougal which was raging. This river reminded us of Whistler’s Upper Cheakamus, except we were running it for the first time without scouting at high water. We decided swimming was not a thing to do, with flush drowning being a concern. We then ran miles of high-water class IV+ with no knowledge of lines and there being nowhere really to scout from, and not necessarily any useful eddies to catch. This went pretty well, considering the possibilities. Most of us found a giant hole to involuntarily cartwheel in at some point, and the crowning moment was four people swimming at once. Another highlight was Joni and I cartwheeling around on top of each other, which ended with me stern-squirting out after maybe twenty seconds. Joni was probably in there closer to a minute. We thought she would swim and everyone started struggling for micro-eddies– everyone grabbing at trees and trying to stay close. “She’s gonna swim!!!”; “hang on Joni, hang on Joni.” Whitney found an eddy big enough to get out from and scrambled up onto some rocks with a throw bag. She shot out and rolled up, and our tension gave way to laughter and high fives.

Eventually we made it to the big one. A solid class V called Crack in the Earth. This is a 15 or 20 footer which flushes immediately into an absolutely violent slot (ultra-violence) which is probably two meters wide. Alicia and Whitney ran it. Both of these people are experienced. They cleaned the boof and entered with total control into the slot, whereupon they were violently cartwheeled through in nanoseconds with no semblance of control at all. I think Whitney rolled three times in maybe five seconds. This demonstration was enough for the rest of us to “SEND IT!… SEND THE PORTAGE!” Though this portage wasn’t really nice either– a sketchy launch off of a 10 foot rock upstream of a sieve. We had been told this was the last drop.

On we went downstream. The river got wider and started to mellow out. Thinking we were done with the serious section, we were all relaxed, still running everything blind. My boat was cracked (luckily?), so Gibran and I had stopped to drain it, and we were maybe 100m behind the rest of the crew, almost all of whom were about to get worked. From far away we vaguely saw most of the crew disappear over a horizon line on the right side of the river, and we saw Rose, about to become my rescuer, who was last among them scrambling for the tiny eddy on the top left of the drop, so we came down and struggled to get into it also. She had grabbed a small tree and she saved us from the fate of the others by helping us stay in eddy as we got out as fast as we could. I was looking over my shoulder at the others– four of them getting trashed in a hole below the drop together. Boats and paddles flying out, I didn’t see people yet. We all scrambled out and down the bank as fast as we could with throwbags in hand as they started flushing out one-by-one and getting shoved into the eddy at the bottom of the drop. The drop they had all blindly slipped into was a nasty backed up slot which the river fell into, making an intense backwash. I was later told Alicia tried to catch the eddy above the horizon line and missed it, then Whitney followed her to keep support close, then Joni and Josh also missed the eddy and followed. Rose caught it, which is probably the reason all of us didn’t get thrashed. The water was headed upstream at the exit of the slot. They cartwheeled together as if in a blender until they swam, and they had to swim deep to get out. Josh was shoved under a shelf with his boat. It was not good. Mistakes were made. Minor consequences were dealt.

All of the boats but one washed into the eddy. The paddles were all off downstream clearly pinned on things but one. We retrieved two, and unpinned a boat from a logjam downstream. The net results: Whitney had a bloody face from a cut above his eye; Josh was shell-shocked like he had just come back from a tour in WW III; and Joni was without a paddle. Luckily, she had a breakdown paddle in her boat. So after some nervous laughter, we finished out the rest of the run and laughed over beers in a rainstorm beside the convenience/gun store at the takeout– ‘Murica. 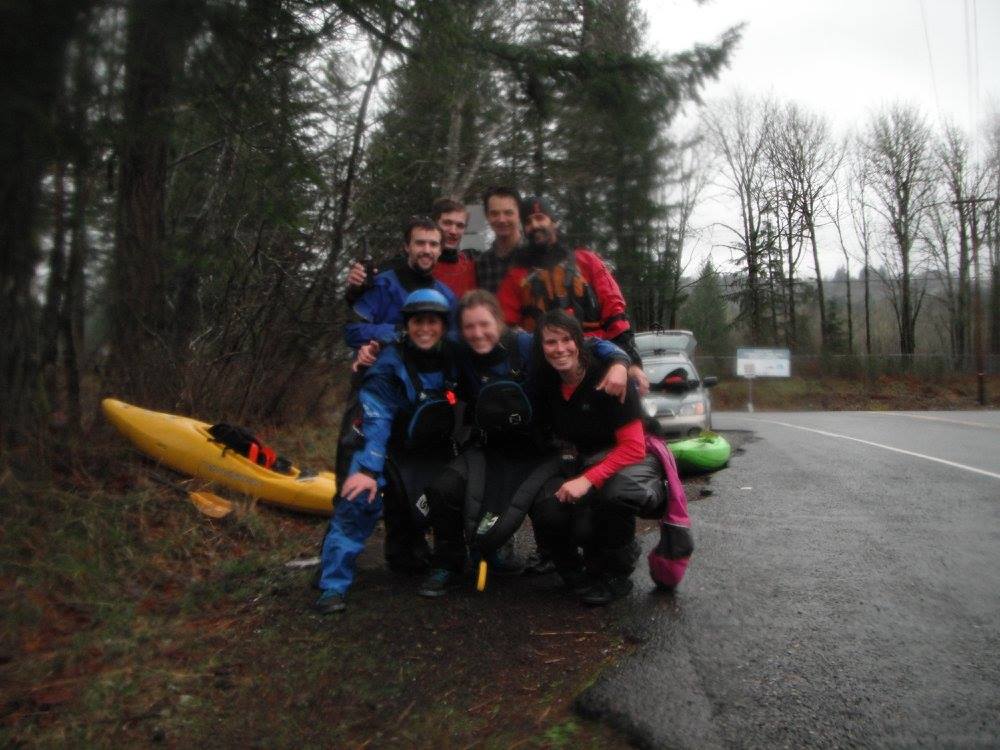 Afterward, we went to a brewery close to Portland. As it was Valentine’s day, people were there on dates. We were there to drink a lot of beer and sit by the fire in our moist clothing– emitting a steamy musk of sweat and various fungi into the room, talking loudly about kayaking, how we were glad we didn’t have any Valentine’s obligations, and how “that boof was DOPE”, etc. etc. An older couple beside us left the brewery, scowling at us on the way out. We wondered why they were upset with us, then we realized we had just been yelling about sweet boofs while the fire liberated a fog of moist rot from us for them to taste alongside their dinner. Sorry guys.

After eating, we left, and we went back to Portland to sleep on a floor. This was day three of our Oregon whitewater epic.

Here’s a link to an excellent blog where some paddlers have actually taken some good photos of these rapids:

And here’s a video from Jason Rackley of the second descent of Hagen creek back in 2008.