Workhike to Lizzie: A beginner’s perspective

The Lizzie trail-builder crew comprised of Roland Burton, Simon Litchwark, Vincent Hanlon, Alexander Girard, Julien Renard, Erica Acton, Kasia Celler, Filip Kilibarda, Mirko Moeller, Jeff Taylor, Jin Guo and me (Taniya Adak). Interestingly, Jin got to know of VOC’s existence and the upcoming Lizzie work hike from me, on the day of the Pre-trip meeting and joined the team without having much idea of what lay ahead. It was also my first adventure in the wild and thus we both comprised ‘the beginners’.  We were armed with tools like loppers, saw and the death machine.

We split the group of twelve into three car loads; each of them left Vancouver at different times according to the respective group’s convenience. I left Vancouver in Roland’s jeep with Roland, Jin, Vincent and Simon on Friday at around 1:30 pm. After a 4 hour drive to reach Pemberton, we headed for the skookumchuck hot springs taking advantage of the extra time, leaving a note tied to a flashy orange fleece on a shrubbery at the Lizzie turnoff.  The rugged logging road leading to the hot springs went alongside the Lillooet lake bordered with mountains. As we were driving along the scenic way, we realized the road was not as bad as expected and later found out that the road was actually being leveled. On our way we spotted a bear and a horse, really close. On reaching Skookumchuck, also known as T’sek hot springs, it did not take much time to decide on a campsite alongside the enthusiastically flowing Lillooet river and after a quick dinner, we headed straight to the hot springs. We beginners were quite excited about all these, as this was our first time camping and had seen hot springs only in pictures. Jin came along with waterproof pants and I wore my shorts. Therefore, Jin and I ended up just soaking our legs in the hot water. Also, it felt quite cold in wet clothes after coming out of the hot tub. Coming prepared with a swim suit would be a good idea for the next time. After the refreshing soak, most of us slept well.

The next morning after quick soak at the hot spring and a hearty breakfast, we drove back to the Lizzie trail head where we met the rest of the crew. Some of them had camped there overnight and some others joined directly from Vancouver. Due to the 2003 washouts cutting across the logging road that leads to Lizzie Lake, the trail begins on a rather difficult terrain for beginners along bypass routes that lead to a marked trail on a ‘used-to-be-a-logging-road’. Being slow and steady with firm grips on the steep sidehills helped me cross and reach the relatively flat logging road. It started to rain. I had water resistant outerwear and removed extra warm layers that I had on me, realizing the 7 km hike ahead. The group split up and hiked according to their chosen pace and ability. As we continued hiking uphill, the bushes became denser, and we had to begin using loppers to chop some annoying alders. We also used a saw and cleared some fallen logs out of our way. We kept hiking up without any idea as to how far we were from the campsite. We took a lunch break at some point on the trail while the others were quite ahead of us.  As we marched forward cutting bushes along our path, amidst those greens and rain, we suddenly found familiar tents, tarps and humans! What a relief it was to see them and a shed to call home in the jungle! So, we ninja camped there. Soon enough, the water that had seeped in through all water resistant outer wears, gloves and boots made me feel really cold. Most of the crew members armed with tools and raincoats headed uphill to slay more alders. I stayed back along with Roland and Jin to gather firewood, light a campfire and sustain it for few hours until the cold and drenched crew returned after the hard work. It was quite pleasant in the evening when everyone was together under one tarp warming ourselves in the campfire and smoke. We even tried drying our wet gloves and socks in the campfire heat and by hanging them up on the tarp. Along with dinner, we also had soul satisfying dessert potluck. Following some friendly times we headed to our tents and tried sleeping. Since it was still raining, we could hear the music of the flowing river and the pitter-patter of rain drops on tents simultaneously. It took some time to fall asleep, but after a while I went into deep sleep. But then I woke up at midnight: Call of nature. I realized the rain has stopped; it was just water falling from leaves that kept the melody on, but slower. For half an hour I was wondering what all consequences I could face if I went out of tent, into the bushes at this dark hour. Could there be a bear or a snake? Calculating the odds, I finally mustered the courage to quickly move out and back to the tent. I had a nice long sleep until I could hear brush saw engine sounds in the morning. What a ‘work alarm’! It was indeed a beautiful day: blue sky, chirping birds, warm day and dry clothes. After the morning rituals we all set out for the valley with tools and high enthusiasm. It was quite fun to cross the one-logged bridge by sitting and hopping on it like a Kangaroo. I slipped and fell once due to a mossy wet log on which I stepped. But falling and quickly getting up was fun too. We walked up the hill and kept slaying alders and pushing them aside.  On the way up, we crossed little creeks and viewpoints from where mighty mountains shrouded in clouds became visible. The trail seemed to have widened as a result of chopping alders and it was a pleasant hike up to the point where we could see the valleys and the Lillooet Lake. After some more trail-building, I joined Roland and Jin to come back to the campsite and have lunch, and then we packed up our tent and backpacks. We started returning back to the car (since we were slow hikers) while others were still working on the trail.

On our way, Roland narrated stories of his many bear encounters and we kept making enough sounds to keep real bears out of our way. Crossing the lower bypass route on the way down was not easy for me and Jin, but we survived unscathed. On reaching the car, with great joy we unloaded our backpacks. Instead of waiting for the rest of the members, we put up some trail markers on the upper bypass route. Once everyone was back, we left the place with many memories and the satisfaction of a weekend well spent. 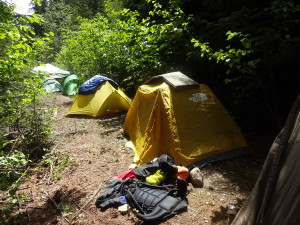 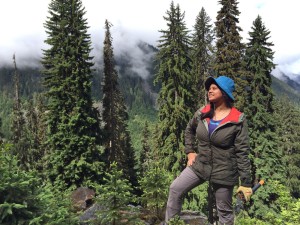 2 Responses to Workhike to Lizzie: A beginner’s perspective