Recently settling in at UBC and it’s Jumpstart program for international students, I thought scrambling in Squamish sounded like a satisfying way to introduce myself to British Columbia. Having joined the Varsity Outdoor Club at 7:00pm on the 26th, I sent a last minute email to the trip organizer, Amin Aziznia, at 8:00pm asking whether I could join his trip the next morning up Skypilot. With a subsequent invitation and last moment logistics, I packed to join my first Varsity Outdoor Club trip.

Meet Up and Drive

Meeting up at Wendy’s on Broadway Street at 6:10 in the morning, our group consisting of Amin, Enrique Cabon, Mirko Moeller, and I packed into a car and started our adventure to Skypilot. Due to some construction on a bridge out of Vancouver, we had some extra time to figure out the music in the car, but eventually made it out to squamish stopping for coffee and the bathroom on the Sea to Sky Highway.

Parking at the base of the Sea to Sky Gondola, we started the approach at 8:00am on the Sea to Sky trail. Still early and under a tree cover with great weather, we walked through the camp grounds and towards a set of steps. Only lasting around half a kilometer, they were steep and kept me winded with only a harness, crampons, helmet, and ice axe in my bag. Mirko on the other hand with a rope in his pack seemingly breezed up the whole section. Hearing other groups were taking the Gondola up instead of the 7.5 kilometer trail with 918 meters of elevation gain made me envious. On the contrary, the ride up cost 40$ and would have been less of an adventure.

Attempting to follow the tags that were posted along the trees and rocks, we often found ourselves realizing we had taken the wrong fork and hence making quick turnarounds. At the 4 kilometer mark, we took a break to hydrate and decide on which fork to take. One trail went 2.3 kilometers up to the summit lodge, but was less direct and harder than the 3 kilometer trail directly to Skypilot Valley trail. We took the trail up to the the summit lodge and on the way encountered a few sections with short fixed lines to assist on the rocky sections.

We arrived at the summit lodge by 10:00am. It is an excellent place to refill water free of charge and to grab any additional snacks plus a beer and some food on the way down for after the summit. 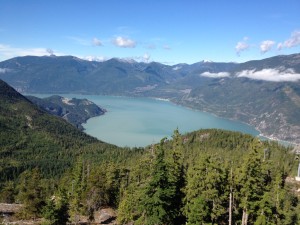 From the lodge, it is a 10 kilometer hike up to the base of Skypilot and Stadium glacier taking the Skypilot Valley Trail. A large portion of this trial involved hiking up hill on a more obvious 4WD path, but later developed into hiking up steep switchbacks in the forest. Taking breaks every so often, Enrique was determined to guess the elevation that Mirko’s GPS estimated. But breaks were not very extended as no one brought bug spray and the mosquitos were often awful in the forested areas up higher.

The next part of the approach involved moving up a few hundred meters of unstable rocks and dirt that slipped regularly from under our feet. On the way down, we found a small trail that would have made going up easier. This was located to the far right when facing uphill. There is also water from snow runoff to refill water bottles if needed. This was the final section before we reached the base of Stadium glacier and started the climb. 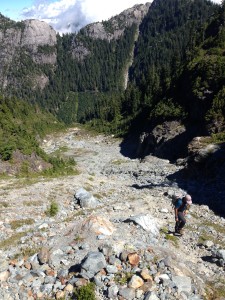 After a break around 2:15 at the base of the glacier, we took out our ice axes and placed on crampons and helmets for the extra safety. Although the crampons were not 100% necessary in this time of August, they worth bringing for the extra safety and assistance with getting up in time. Sticking near the rocks on the side of the glacier, it took a total of 10-15 minutes to make to to the col between Skypilot and it’s neighboring peak, Copilot. By sticking closer to the side, we avoided the blue ice found throughout the center on the way up. 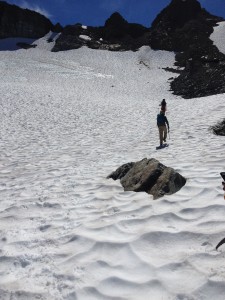 Once at the col, we put away the glacier travel gear and started the scrambling sections. The first 30 minutes was predominantly class 4 scrambling with intermediary bits of hiking through bushes. This brought us to the bottom of Pink Slab, the crux of Skypilot on the West Buttress route. Enrique volunteered first to charge up Pink Slab, making it look easy with the rope in his pack incase he needed to belay anyone from above. While we thought this was on the route, we realized only on the way down why we could not find the supposed rappel bolts and why it did not feel like low 5th class climbing. Instead of walking to the left and climbing the 50 meter Pink Slab like the route describes, we accidentally all soloed our way up a longer and more exposed YDS grade rock section that involved unnecessary traversing and difficulty on the right side on the slab. This was everyone’s first time on Skypilot and we were unaware of our mistake. 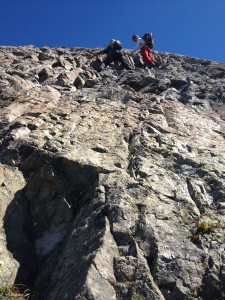 After Mirko and I followed from behind, we crossed more unstable rock and dirt to the right of the slab. We encountered a few large rocks coming out from each others feet and towards members of our group, making us attempt to stay out of each others fall line. This led us through a tight squeeze in a narrow path to the bottom of the first gully. The first gulley was more scrambling and at some points vertical, but much more friendly than our exciting experience on Pink Slab. This led to a traverse on a path with a couple hundred meters of exposure. We arrived at the final gully up to the summit at 4:00 and encountered another 30 meter section of steep scrambling with lots of exposure, but bolts for rappelling at the top of the pitch. Summiting Skypilot at 4:15, we took in the amazing view and then started the descent. 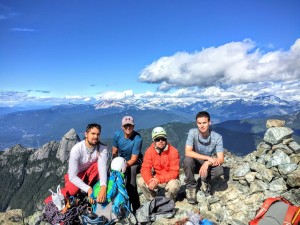 We followed our same path down, but choose to rappel instead of trying to down climb. The rappel stations on both the summit gully and the ones we missed initially above Pink Slab were in good condition. Without the rappelling set up, a down climb would of been rather uncomfortable. At the col, we descended quickly on to the glacier. Both walking down and glissading were options from the top. From the bottom of Stadium Glacier at 5:15, we hiked quickly back to the summit lodge where we arrived at 7:10 to finish the day.

End of the Day

Amin, Mirko, and I choose to sit at the summit lodge for an hour having a bit to eat and beers. From there we took the gondola down for $10, but Enrique decided on continuing down without the gondola on the same 7.5 kilometer trail we took up. In retrospect, not sticking together when it was dark out was a bad decision. While we were back at the car by 8:30, Enrique who we expected to be there wasn’t. Having made a few turnarounds on the way up during the day, we realized Enrique might of made a wrong turn in the dark. As we worried and waited, debating whether to set a time in which we call search and rescue, Amin and I picked up food for the group at the store. Mirko waited and eventually Enrique showed up significantly later than expected, having ran down the path as fast as possible to be the dark. His headlamp had also ran out of batteries and his spare were left in another pack.

With our greatest of fear over with, we ate food in the parking lot and drove back to Vancouver listening to Rammstein, Spanish music, and German rap, celebrating our success on Skypilot and ending the day at 10:30pm.