Posted on August 27, 2016 by Emmanuel Malikides 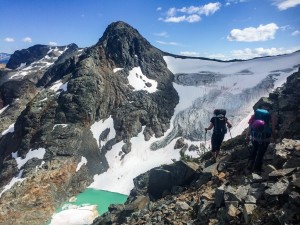 The Veenstra Traverse. “It’s a club classic” Caitlin [Schneider] had said. A great way to begin my involvement in the club. True words.

To be honest I wasn’t really paying attention when Christian was reading out the route, so I couldn’t really tell you where we went. In actual fact I missed that part of the meeting, only to blunder in later and shock everyone with my thorough ignorance of ice axes.

“It’s ok, I’ll teach you [about the ice axes].” Tiffany had said. Thank god we didn’t have to use them. (or at least I’m pretty sure we didn’t, some people might have gone ice-axing things about the place).

I think we went somewhere near Pemberton.

There were three things which struck me about this trip. The most important and first thing were the thimble berries. Known in academic circles as Rubus parviflorus, this berry is native to North America and grows anywhere from sea level to 3000m. Unlike other plants in its genus has no thorns, and like raspberries is an aggregate fruit of numerous soft drupelets around a central core. The softness of the drupelets means it is rarely shipped anywhere, which explains why I, being Australian, have never encountered these delicacies. Would recommend. 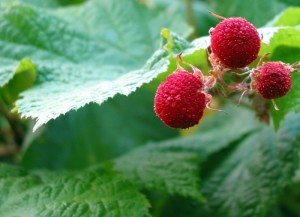 As is well known, everything in Australia kills you. This explains why berries are an exciting phenomenon. You can’t usually eat berries in the Australian bush.

The second thing which struck me was the mountain goat.

Why do mountain goats clamber about on cliffs like that? It makes no sense. Wikipedia couldn’t tell me. Something to do with temperature and predators??

The third thing enjoyed by all was skinny dipping in the numerous lakes, one of which had an in-built canoe for our convenience. 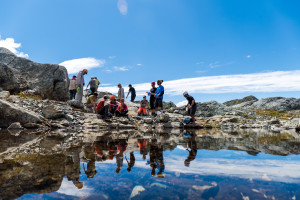 Fantastic experience all round, my friends. Despite some concerns about thunderstorms, which did actually eventuate on Saturday night and Sunday, the weather was otherwise great. The storms lead to some dramatic skies beheld on Saturday night. 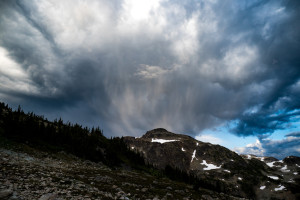 Christian runs a tight ship, and accordingly the large group of 24 stayed well on schedule and surprisingly close together for the duration.

The group were particularly close together under Christian’s fly.

Oh yeah! There was a freaking incredible scramble up mt Barbour which, though only grade 3, had a lot of loose rock, was pretty near vertical, and was dangerous as hell. 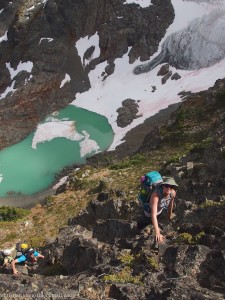 Unlike the photo alignment in this trip report. 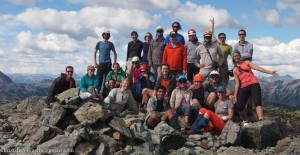