Posted on October 15, 2016 by Lucy Buchanan-Parker

Having been VOC members for almost a year and having gone on more trips than we can count, we figured it was time to organize a trip ourselves, and Thanksgiving on Wheels was born. Ian later named it the ‘Four Lakes Bike Tour’ which has a nice ring to it.

Not deterred by the dismal forecast, five hearty souls set out on coordinated buses to Horseshoe Bay to meet one more in Nanaimo. Our group consisted of Alberto and I, plus Tom Curran, Ian Johnston, Ilia Capralov, and Flo Rudolph.

The rain could not make its mind up as to whether it wanted to be heavy or light as we started out, and much time was spent faffing over exactly which rain gear to wear as we rode out of Nanaimo. The decision was made easier for Alberto since he had made the dubious decision not to bring his waterproof pants, and for Flo who had already applied his waterproof layer of plastic bags on his feet, plus gaiters. Soon it made up its mind to rain heavily for the duration of the day and we pedaled westward towards Nanaimo Lakes and then taking the Nanaimo Lakes Main logging road south to connect with the back end of Cowichan Lake. 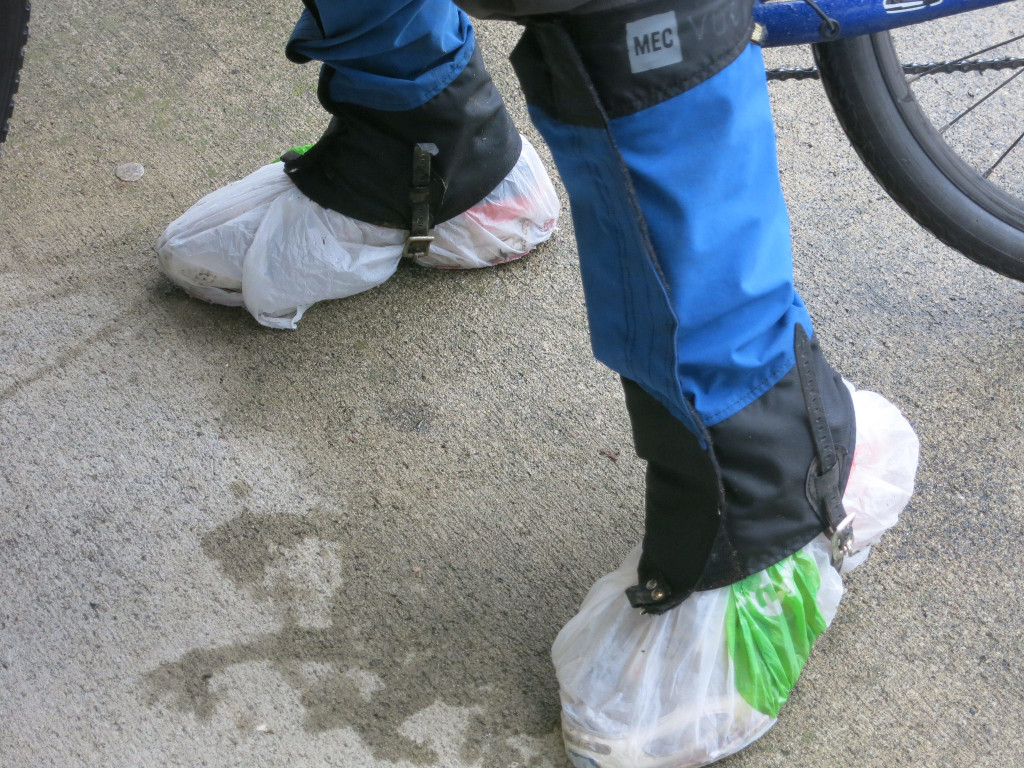 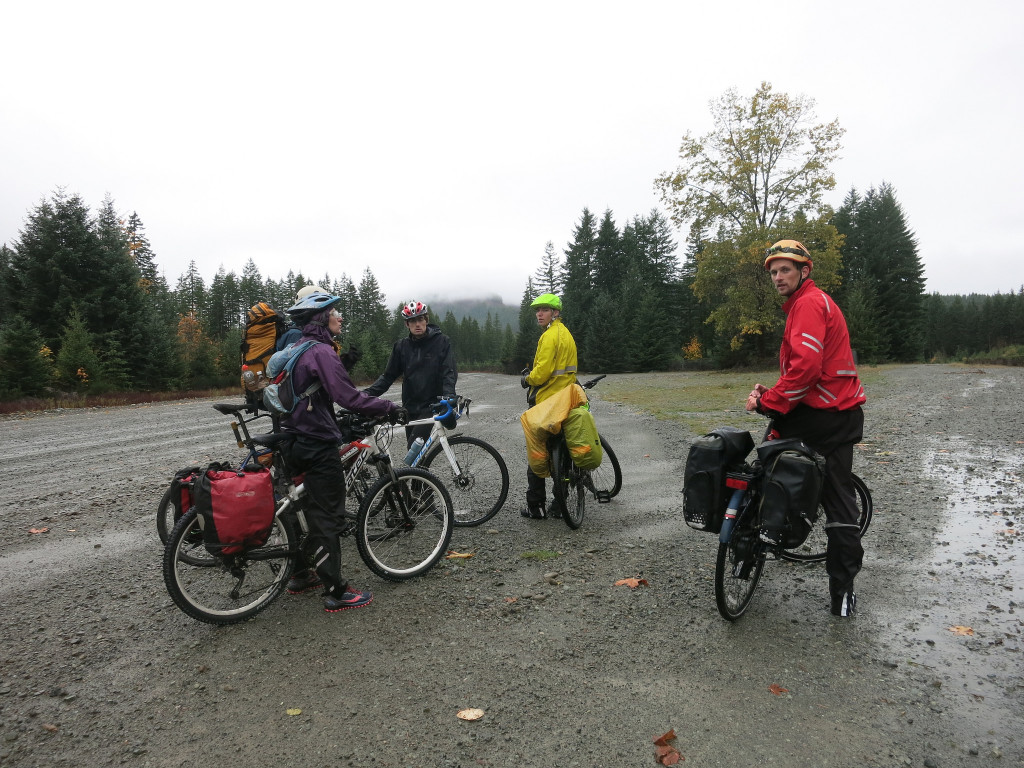 Due to google maps’ confusion over the roads and some last minute route changes, we were not 100% sure of the distance or elevation gain of our proposed route, and our memories of the route (we had done it last summer) were fuzzy at best and usually only called up the relevant information after it was too late. Although this may have been frustrating for our participants it had the delightful effect of feeling like a whole new trip to us.

The rain was miserable at times but it minimized our desire to faff, which was good because we had a long day ahead of us. Luckily for us all, we had Flo with us who had the ability to get stoked about absolutely everything, including eating dry uncooked oats. So we managed to keep in good spirits. 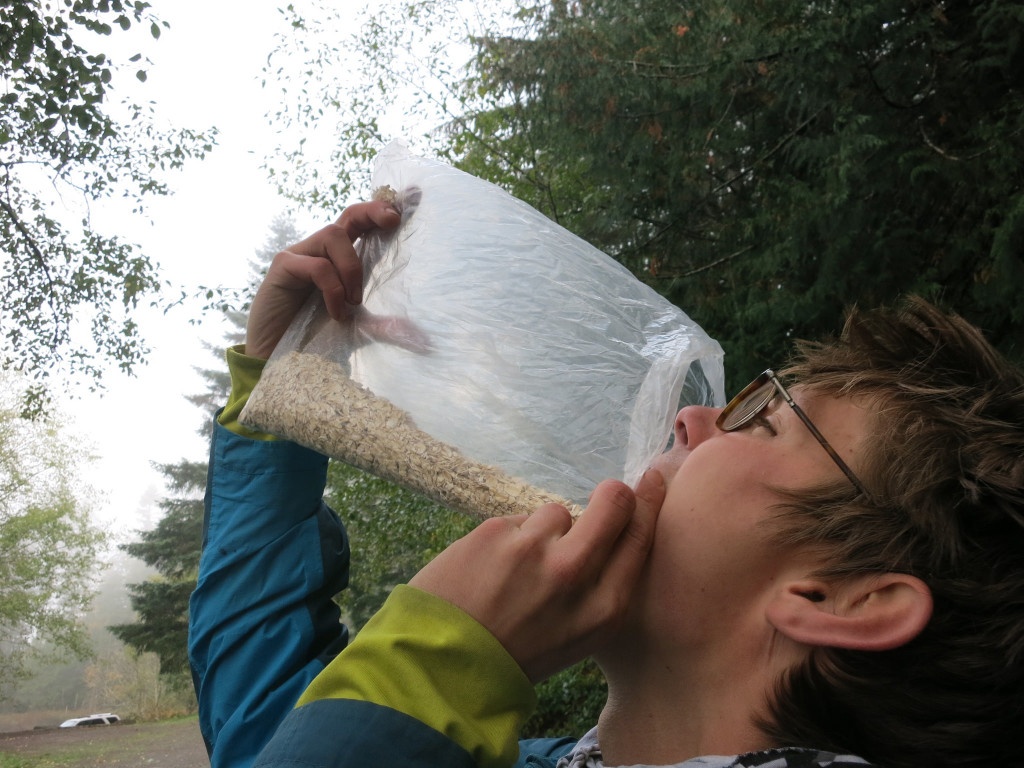 The logging road was in pretty good shape, as we remembered, although there was one steep and loose section that had 5 out of 6 of us walking. Soon we had reached over 800m in height and it was time to begin the chilly descent and race against sunset to make it to the rec site we hoped to sleep at. Some of us had skinnier tires that proved less than ideal for a muddy and gravelly descent, so we took it easy. 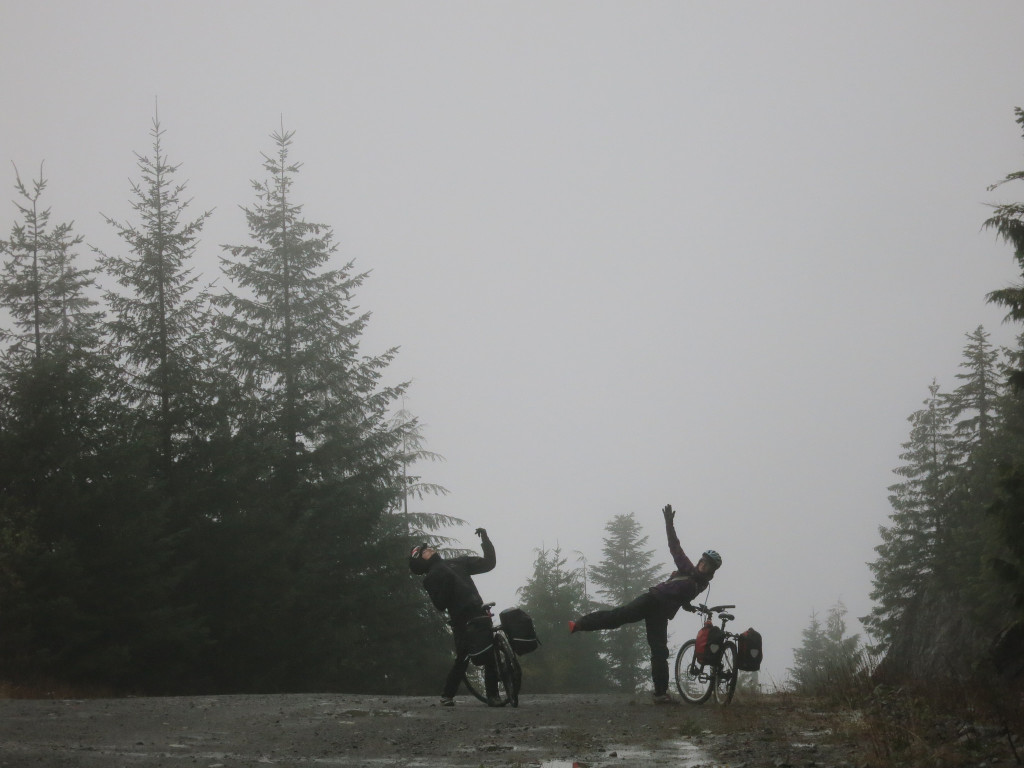 The top of the pass! Photo by Alberto Contreras. 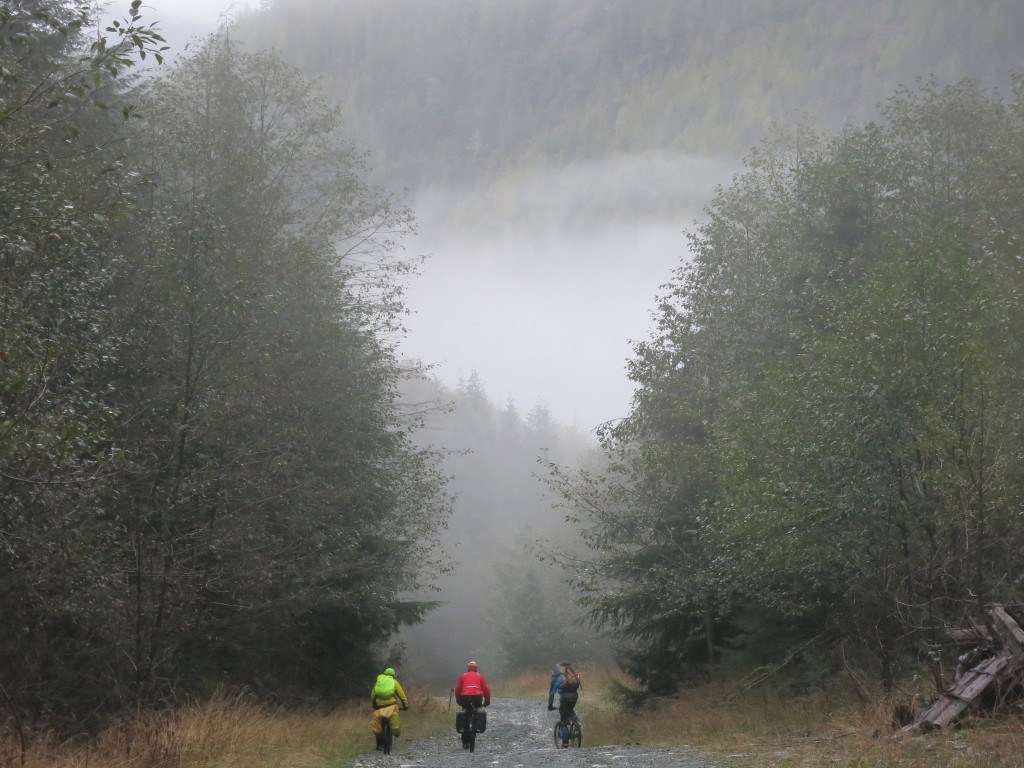 We did not beat the sunset, but decided to press on anyway, which turned out to be a good decision since the campsite had already gone to winter mode and was free and uncrowded. It was fun to ride into the night, especially for Alberto, who had his new Zebralight full power to lead the way (he had to lead the way because if you were in front of him and turned to look behind you, you would be temporarily blinded). We pitched at a lakeside spot in the dark and changed into dry clothes. It had stopped raining by that time and we were able to enjoy dinner in the relative warmth (being at 200m) before drifting off to sleep. 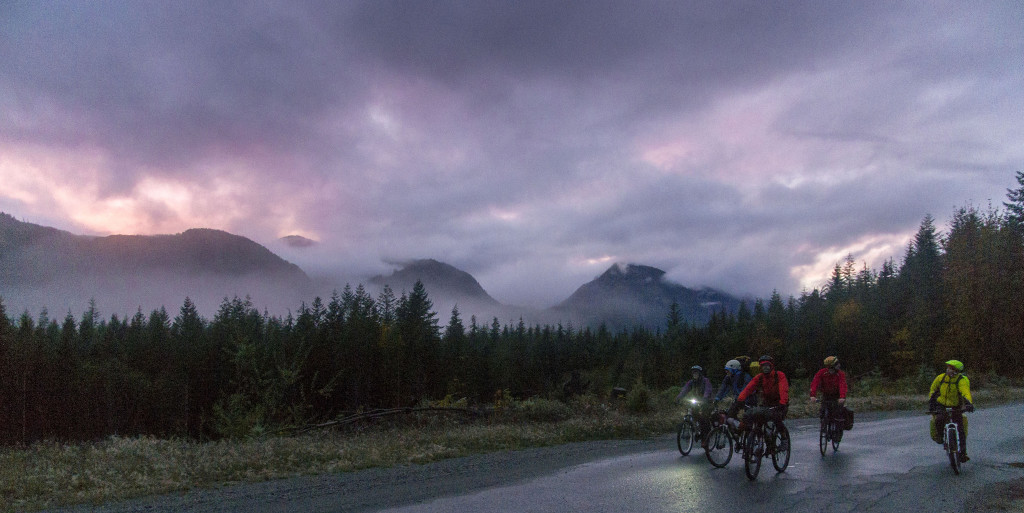 Riding into the night. Photo by Ian Johnston.

We aimed to set early off on Sunday but the realization that lakes at 200m are not actually that cold meant that 5 of us went for a swim in Kissinger Lake just as the sun peaked out from behind the clouds. It was past 10am by the time we got on the road and we proceeded to faff our way along the north side of Cowichan Lake. We arrived in the town of Lake Cowichan just in time for lunch and made a beeline for the supermarket. Knowing that we were headed to Tom’s aunt’s cabin that night, we stocked up on the makings of a thanksgiving feast and set out along the Trans Canada Trail section between Cowichan and Shawnigan Lakes. 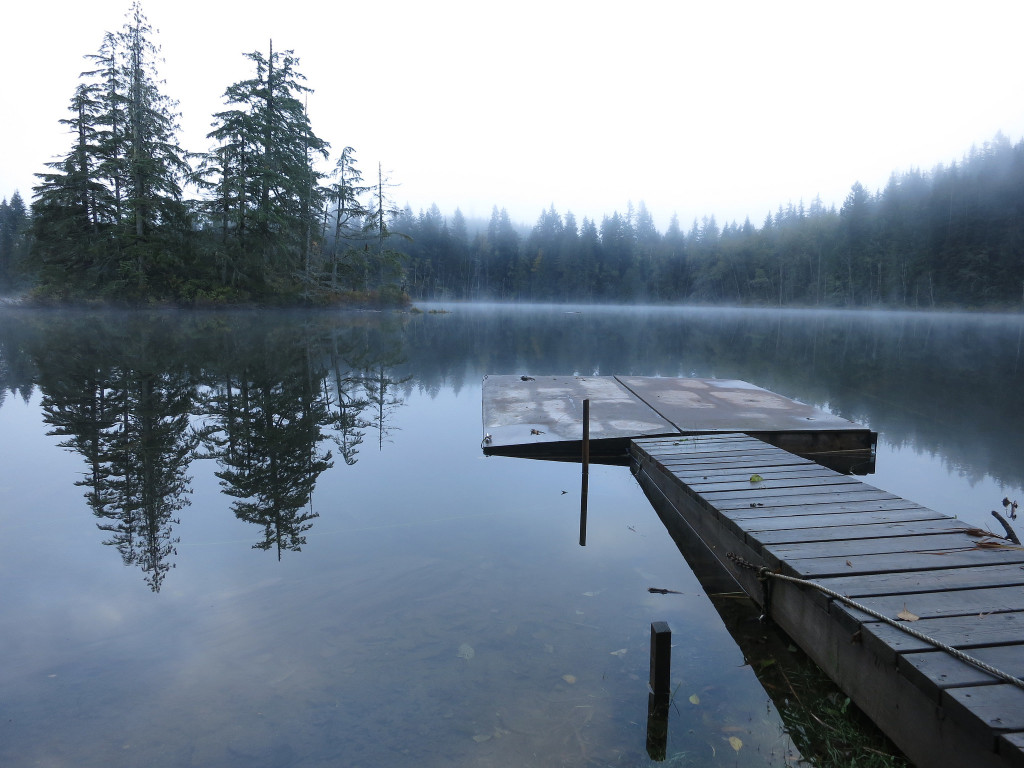 The trail conditions were more varied than Alberto or I had remembered, but we made good time on the trail, which is an old rail bed and so is basically flat. None of us was interested in riding in the dark again so we stopped only to clear the occasional fallen log off the trail (does this count as a work-hike?) and for photo ops on the railway trestles. 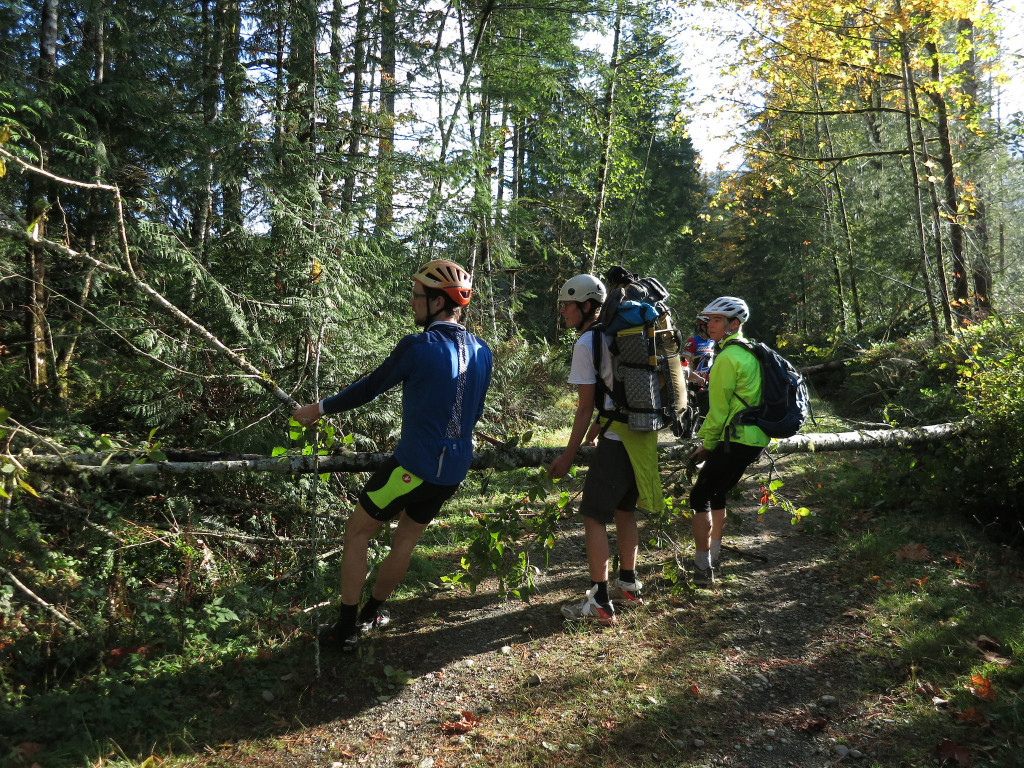 Trail work on the Trans-Canada Trail. Photo by Alberto Contreras. 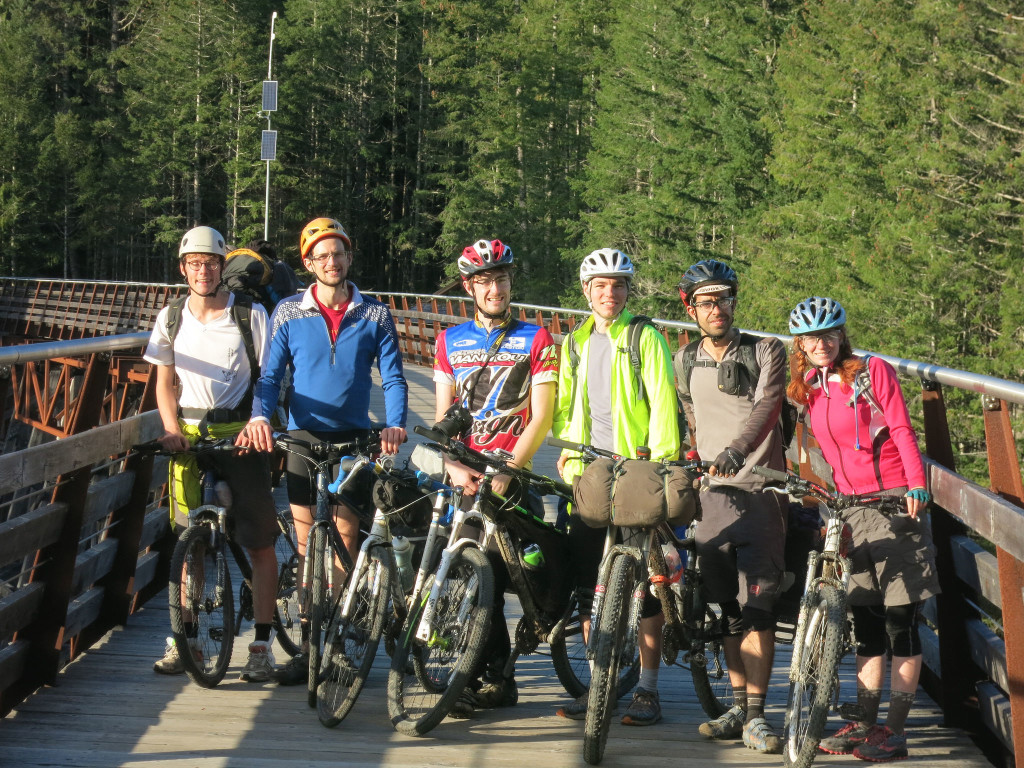 The team on the Kinsol Trestle.

We arrived to Tom’s aunt’s cabin near the southern tip of Shawnigan Lake with plenty of daylight (but not enough that we were interested in swimming). Muddy outer layers were abandoned on the porch and inside we set about preparing Thanksgiving dinner. It was around this time that Tom decided to reverse-test the waterproofing of his panniers by having a beer can burst inside it. No beer escaped the pannier so he had to fish out several beer-infused items including his VOC Songbook.

Thanksgiving dinner came together remarkably quickly and easily and soon we all sat down to turkey sausages with caramelized onions, roasted root vegetables, green beans, cranberry sauce, instant mashed potatoes, and stovetop stuffing, with pumpkin pie and whipped cream for desert. After a few hours putting the world to rights on a variety of subjects, we rolled out our mattresses on the floor of the cabin by 11pm. 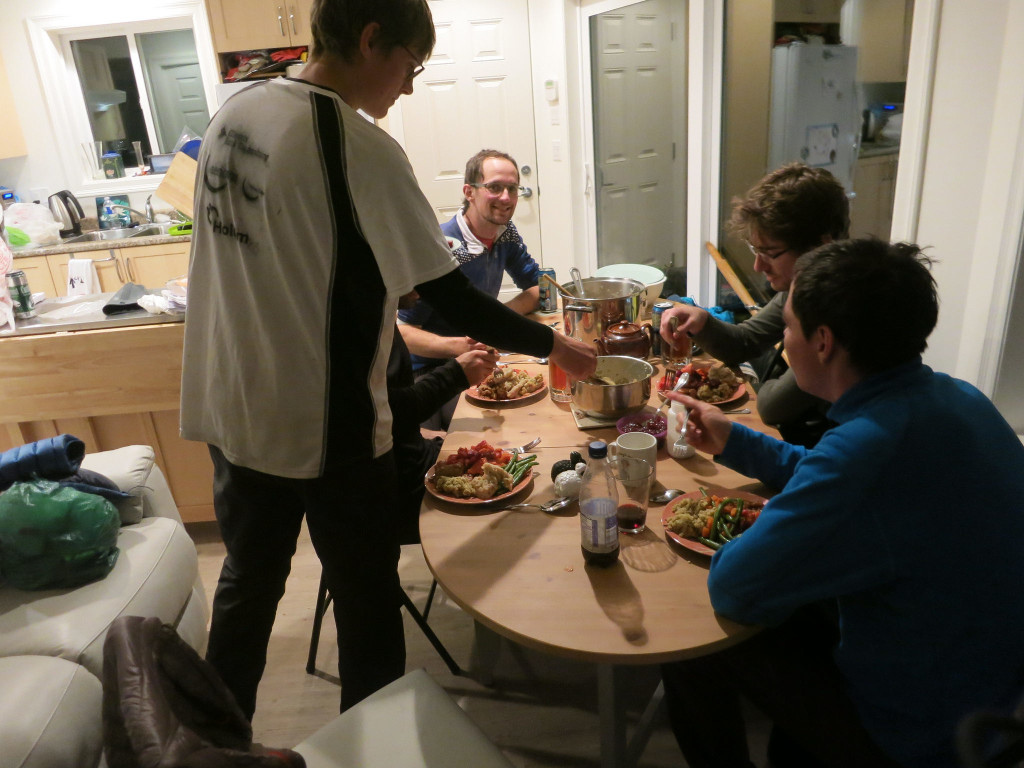 Precision timing was needed in the morning to have a luxurious breakfast of scrambled eggs and bacon cooked by Ilia, send a delegation of three to swim in Shawnigan Lake, clean the cabin, and depart in time to make the Mill Bay Ferry – but it all worked like clockwork. Soon we were riding on the comparatively busy Saanich Peninsula and saying goodbye to Flo who was heading to Victoria. A quick stop in Sidney for a hot drink by the ocean and we rolled into Swartz Bay just in time to sneak in before the cars onto the ferry to Tsawwassen.

In the final victory of the trip, we all managed to snag bike spots on the three busses leaving Tsawwassen after the ferry arrival, which our tired legs and sore bums appreciated very much.

I couldn’t have asked for a better first Canadian Thanksgiving or first trip that I helped to organize. I’m very thankful for the excellent company, sunny weather on Sunday and Monday, and the fact that quiet roads do exist in BC, if you look hard enough.

One Response to Thanksgiving on Wheels (Four Lakes Bike Tour)