We climbed some ice!

Written by Alannah Wallace about Daughter of Ice, 2017 (posted for her because she is crazy busy with school and doesn’t have time to mess around with the photo system)

Before I left for the trip I said to myself “Don’t agree to write the trip report” but here I am.

I had been wanting to do this trip since the summer when I first heard about it. When I saw how many people signed up as interested in the event I got really worried I wouldn’t get a spot. For two weeks I stayed up late at night, tossing and turning, thinking about the sign up list. When it came time to sign up, I was sitting there sweating with my hand on the mouse. I got spot number 8/9.

My mom just sighed when I told her I was going ice climbing. I walked around smiling like an idiot that day when I found out I was going. When I told friends every single one of them said “Okay, please don’t die.”

We left Friday night around 7pm and got to the campsite at Marble Canyon after midnight. The van full of boys let me play country music for three straight hours and even claimed to enjoy it. No one ever lets me play country so I was really happy. A great start to a great trip!

We spent three nights winter camping while another group at the crag bragged about their warm motel they were staying at in Lillooet. We climbed two full days and then got in a couple climbs on Monday before leaving around 1pm. We were woken up early in the morning by a voice saying “time to get up VOCers, let’s go climb ice!” I felt like we were at summer camp, except colder. Or the military.

The climbing area was a short five minute walk across the frozen lake from the camp site. Sometimes there were ice fishers drinking beer and waiting in the cold for a catch. The walk across the lake was just enough time to get the feeling back in your toes which was nice. In the morning with my frozen feet I was a little miserable, but by the time I got across the lake my thoughts turned to immediate stoke. 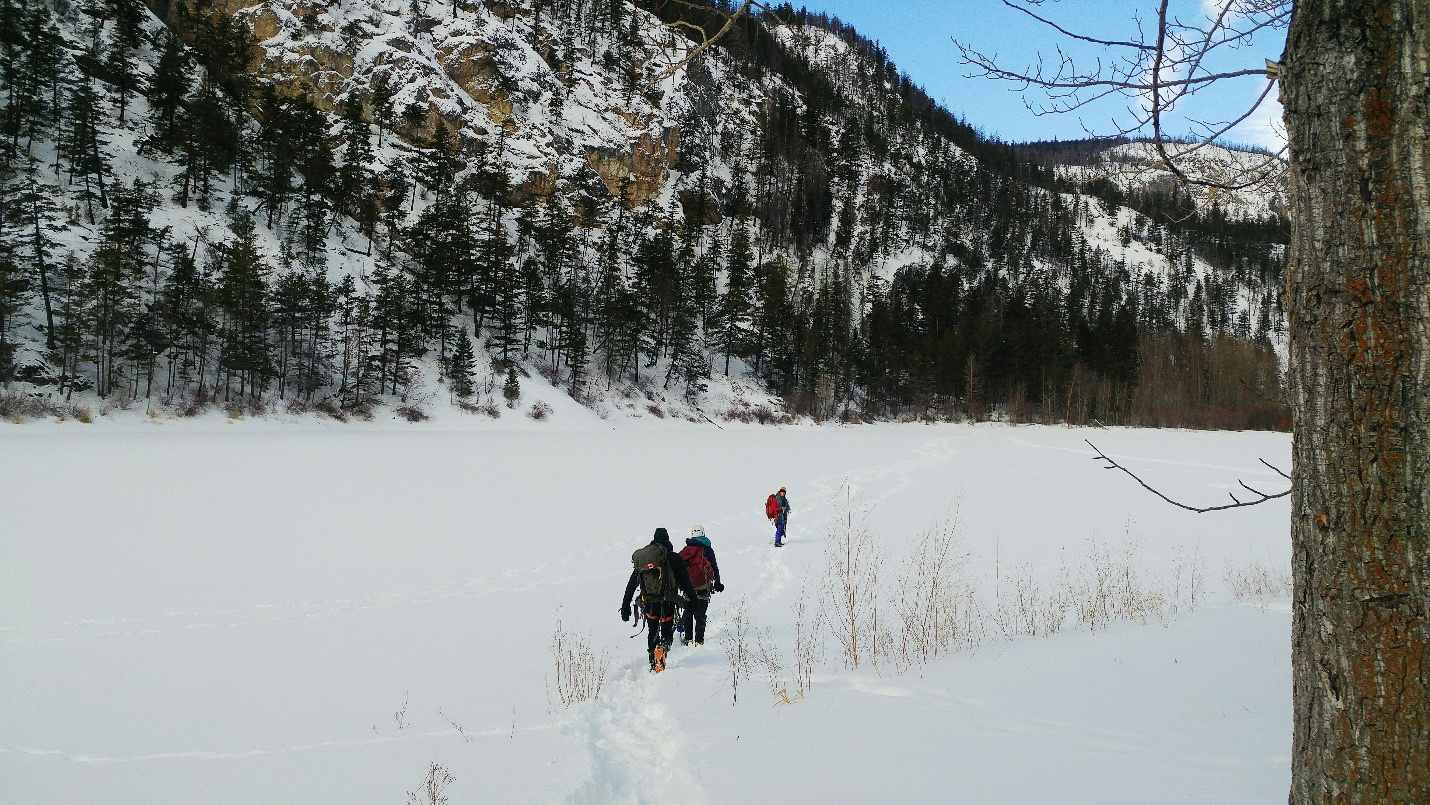 On the way to the crag. 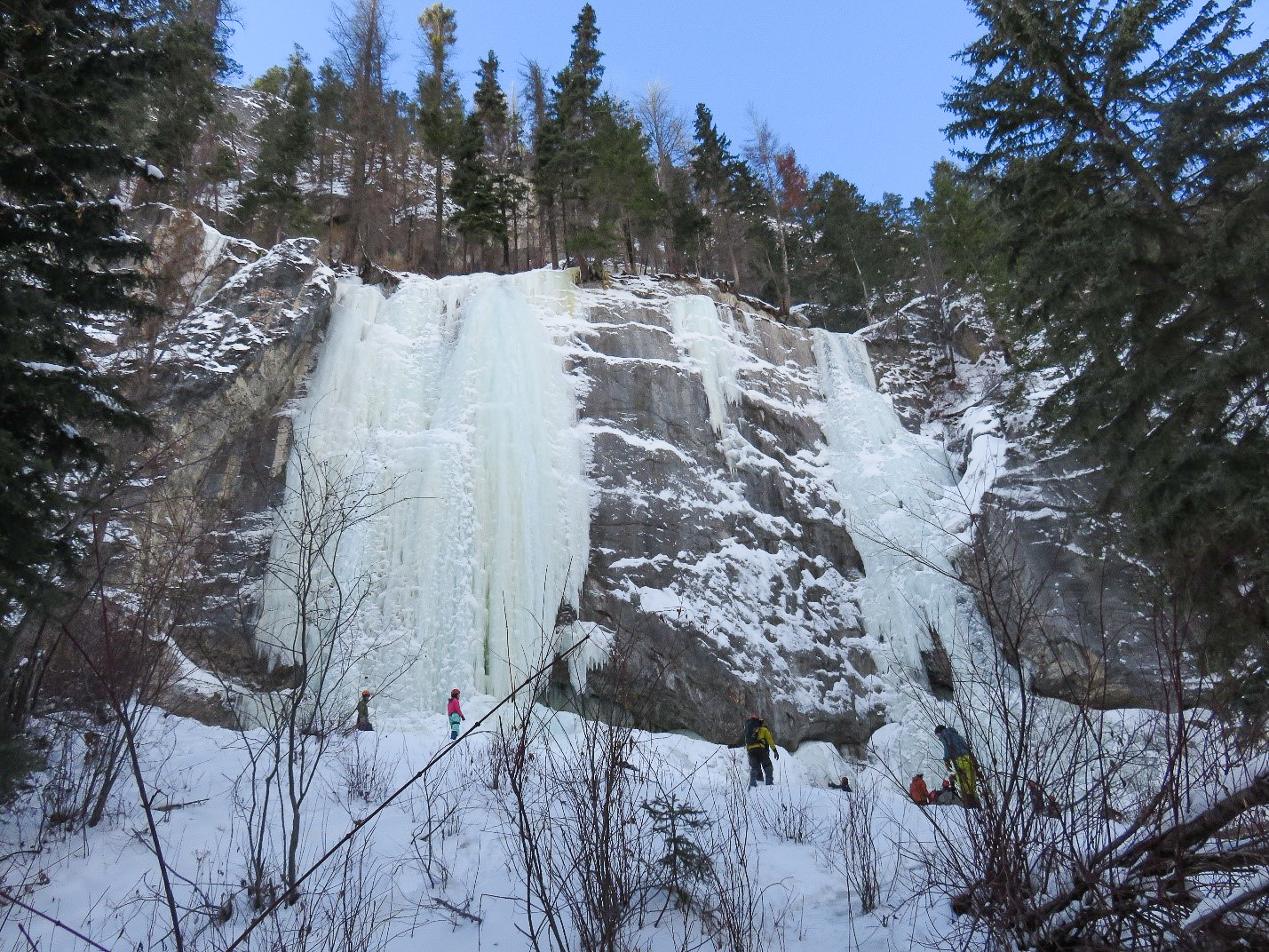 Before we went, we all watched a couple really useful videos on climbing form. You need to hit your ice axe as high as you can above you, keep your arm straight, push your bum out and look at your feet, then quickly move your feet about shoulder width apart directly under your ice axe to form a triangle while bringing your hips in close to the wall, and then repeat with the other arm. This saved a lot of energy. 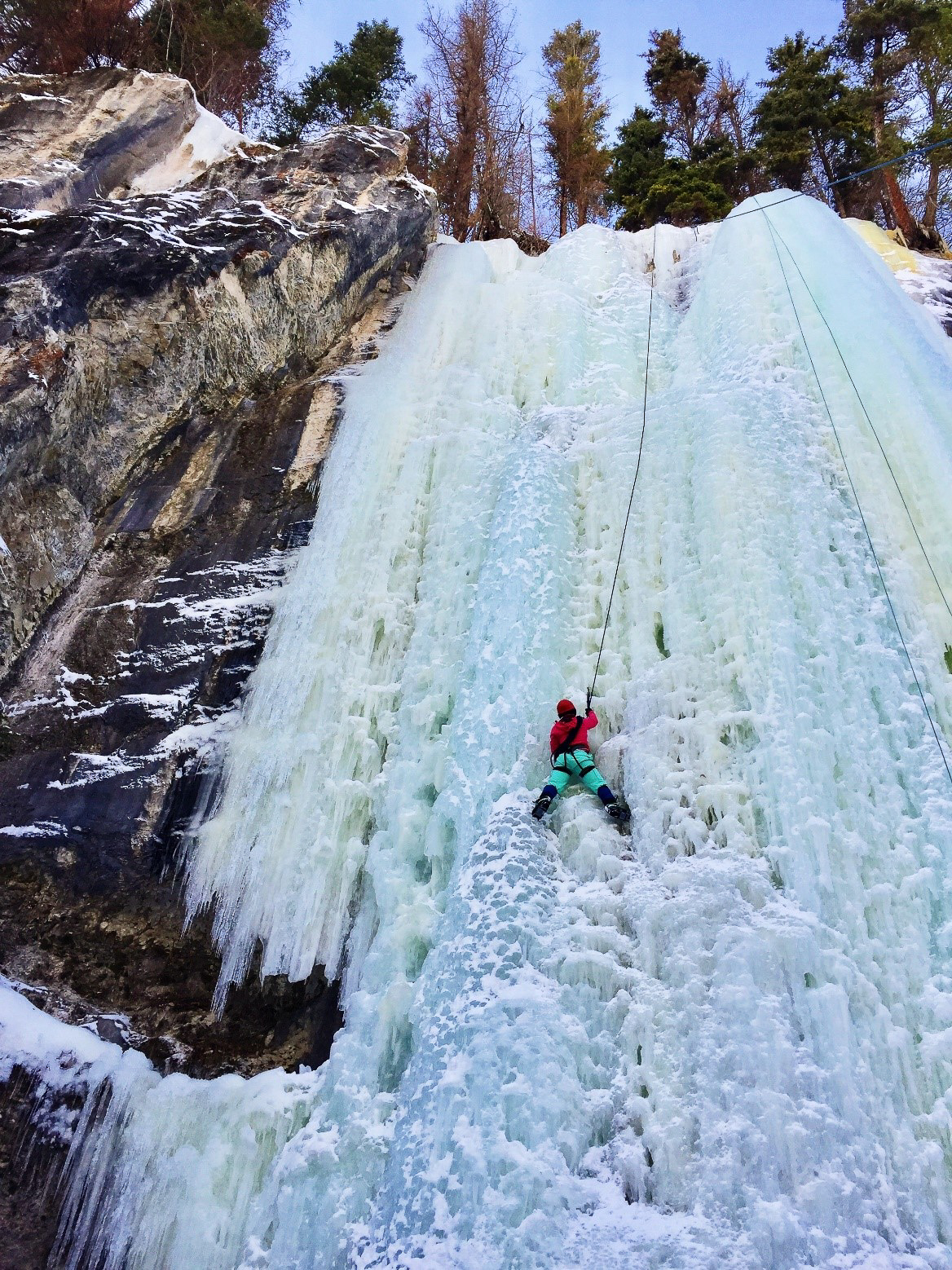 It was also useful to try and hook your ice axe in pre-existing features instead of spending all your energy hacking at the ice for a good hold. You will not have living arms after 15 minutes of just doing this. One time as I was hacking away at the ice a huge chunk of ice broke off and flew into my face. I felt my upper lip go numb and it started bleeding. The ice didn’t even cut me in a cool place. I would have preferred the cut in a better spot like under my eye or harry potter style. 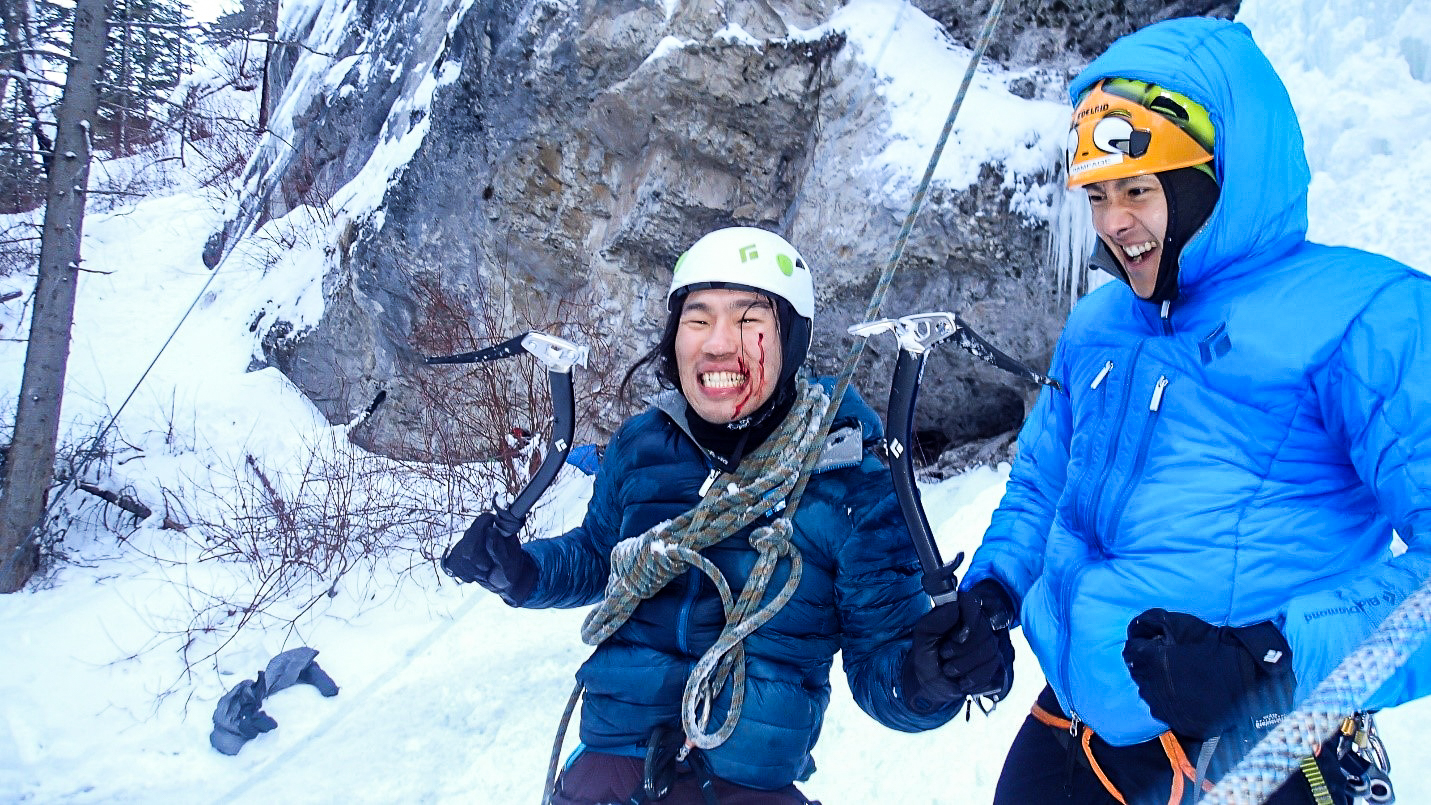 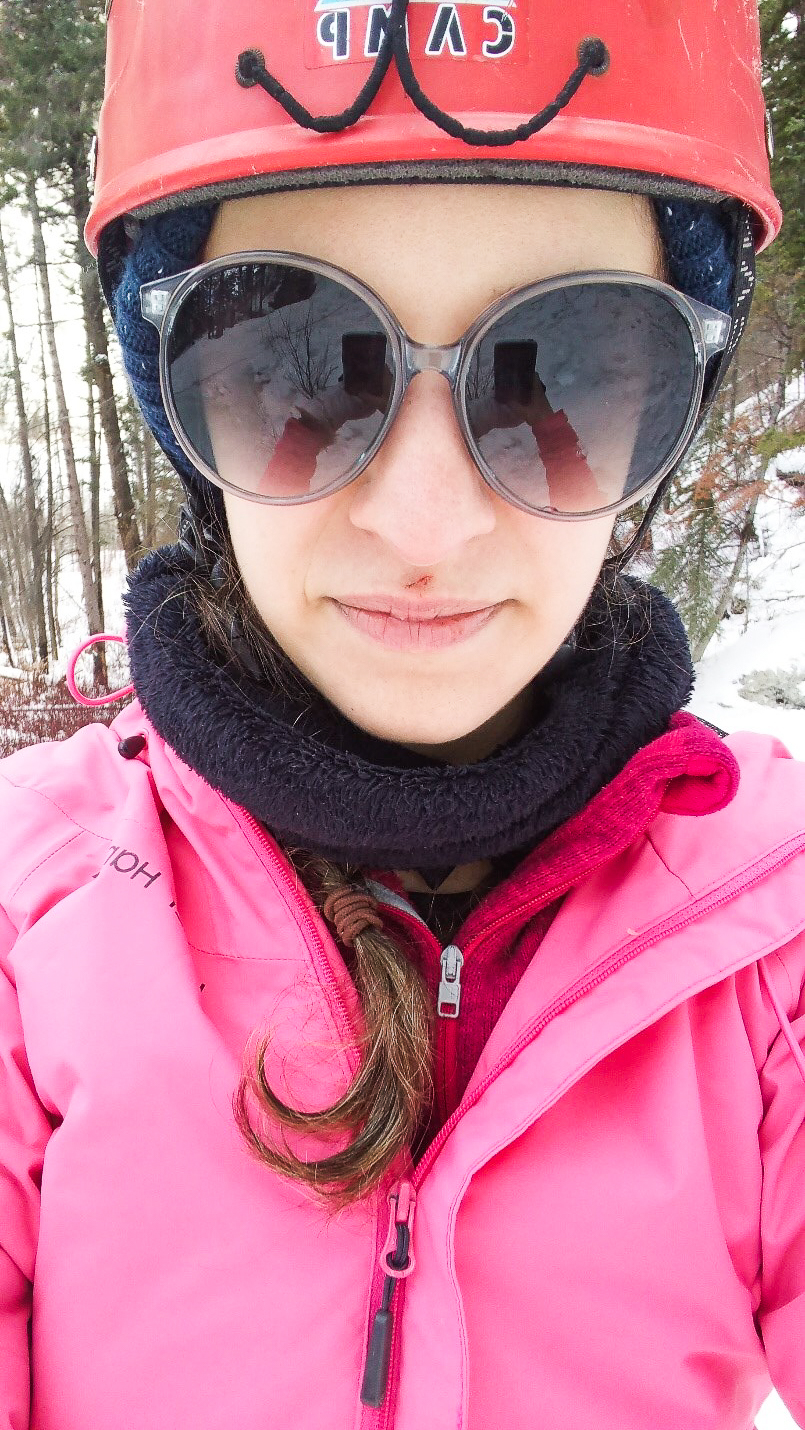 My not cool cut.

The frozen waterfall was higher than I thought it would be. Probably about twice the length of an indoor climb. Getting to the top of indoor climbs already made me nervous. So clinging by a couple metal spikes to a large vertical hunk of ice up there was a little unsettling. It was common for us climbers to ask to be lowered from half way up a climb only to be harassed by those on the ground to first take a rest and then try to go up a bit higher. 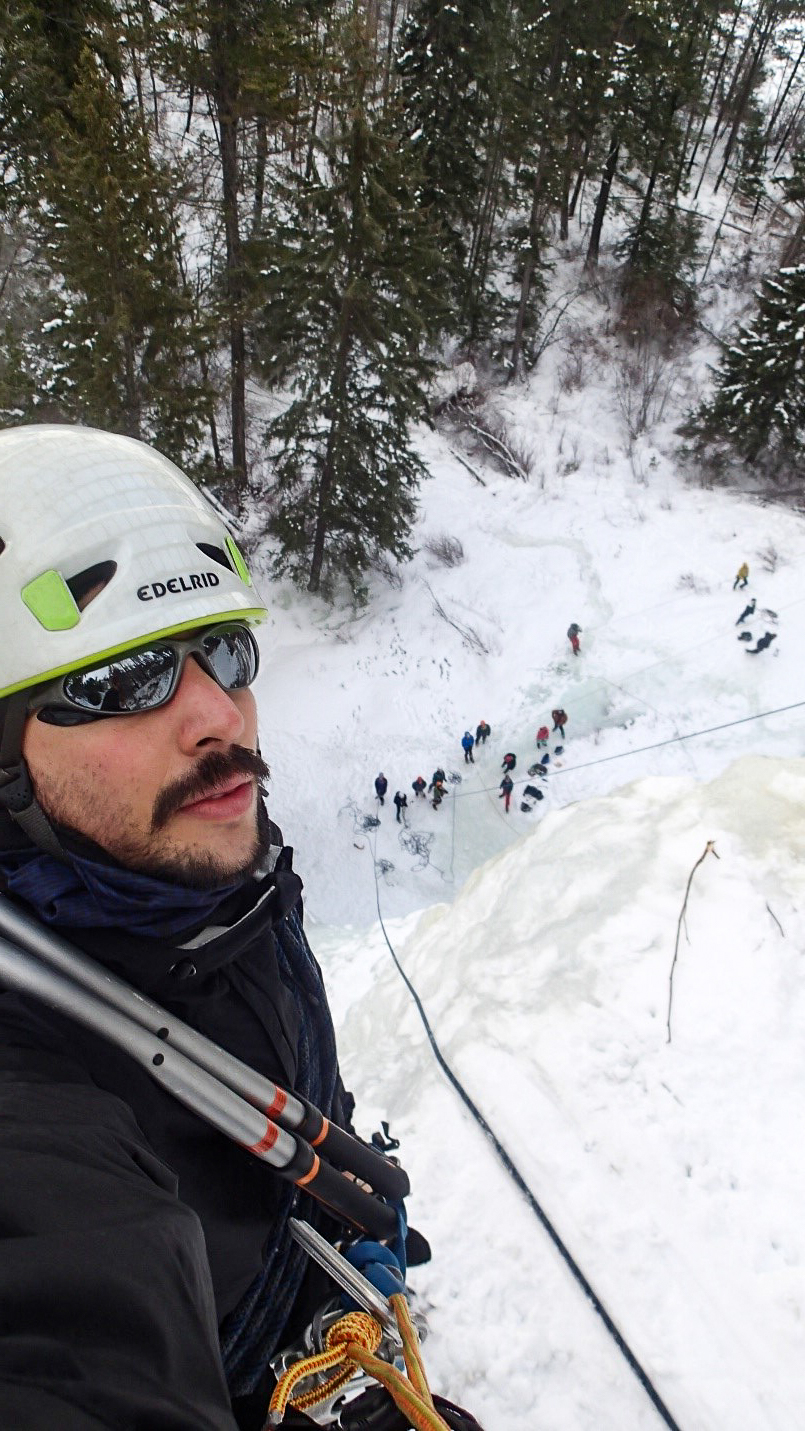 Picture of Federico at the top.

In the evenings we gathered around the warm camp fire. You can tell when backpackers go car camping because they bring the most extravagant meals. Over the fire there were ribs, vegetables, curry, and cheese smokies. There was also bacon and eggs every morning although I did see some people sadly eating oats. 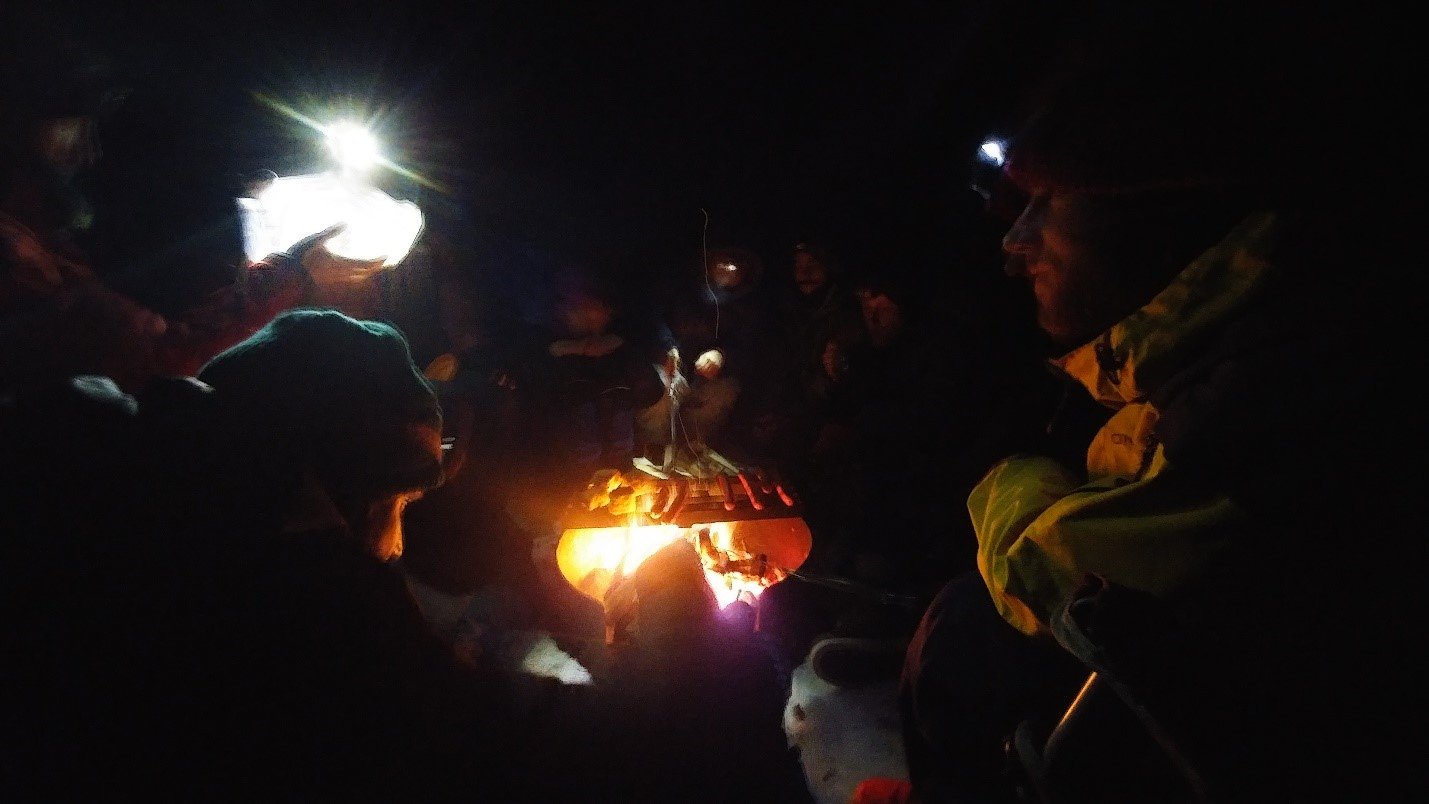 Matt gave an emotional speech around the camp fire on the last night to say how happy he was that we were all there. Going back to the warmth of real life was weird. I don’t get to climb ice every day? What? I kind of forgot for a few days that there were other things in life that matter other than trying to feel your toes and trying to find the best place in the ice to put your axe. Ice climbing was an amazing experience and I hope we can get more groups out next season! 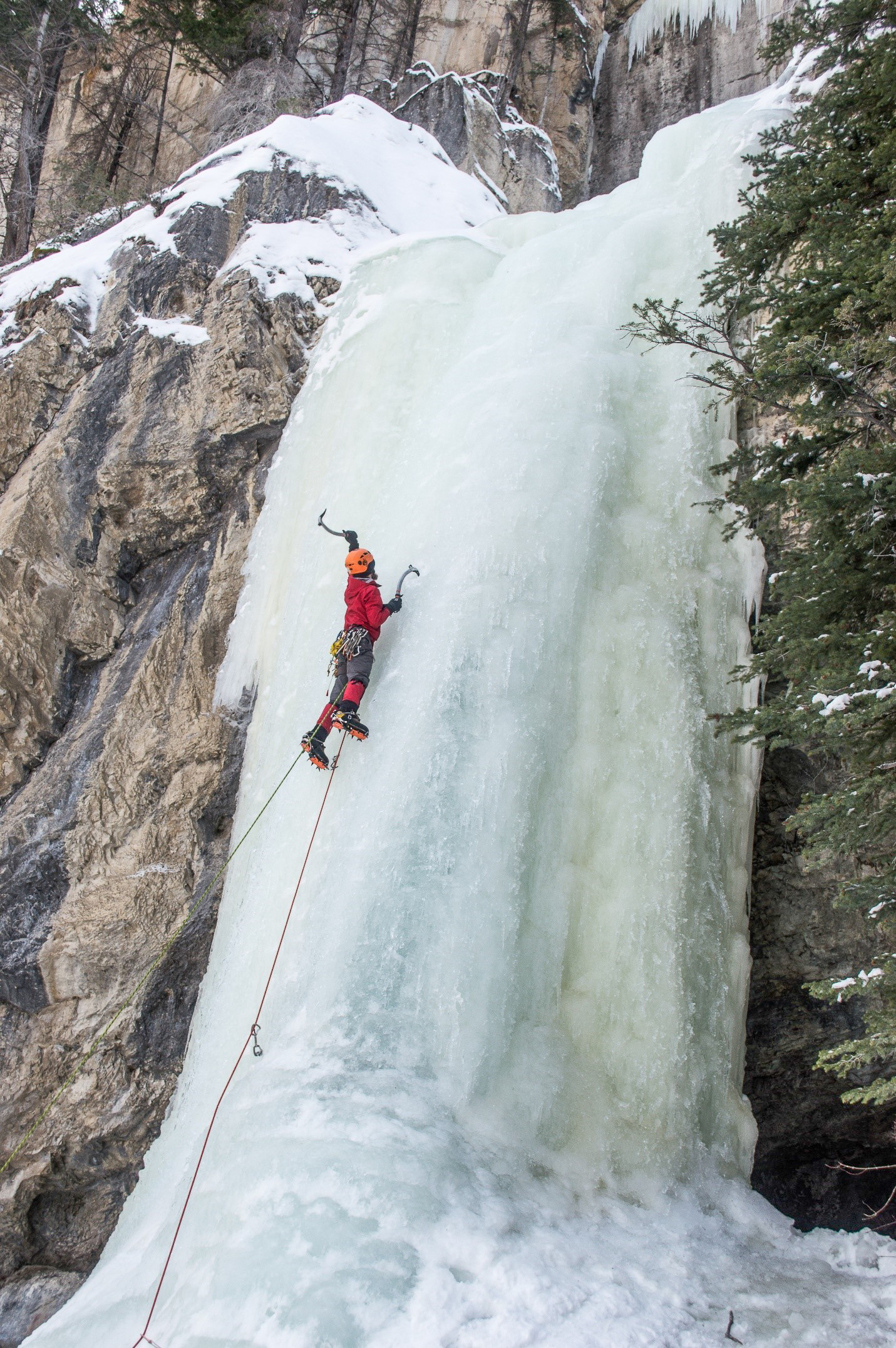 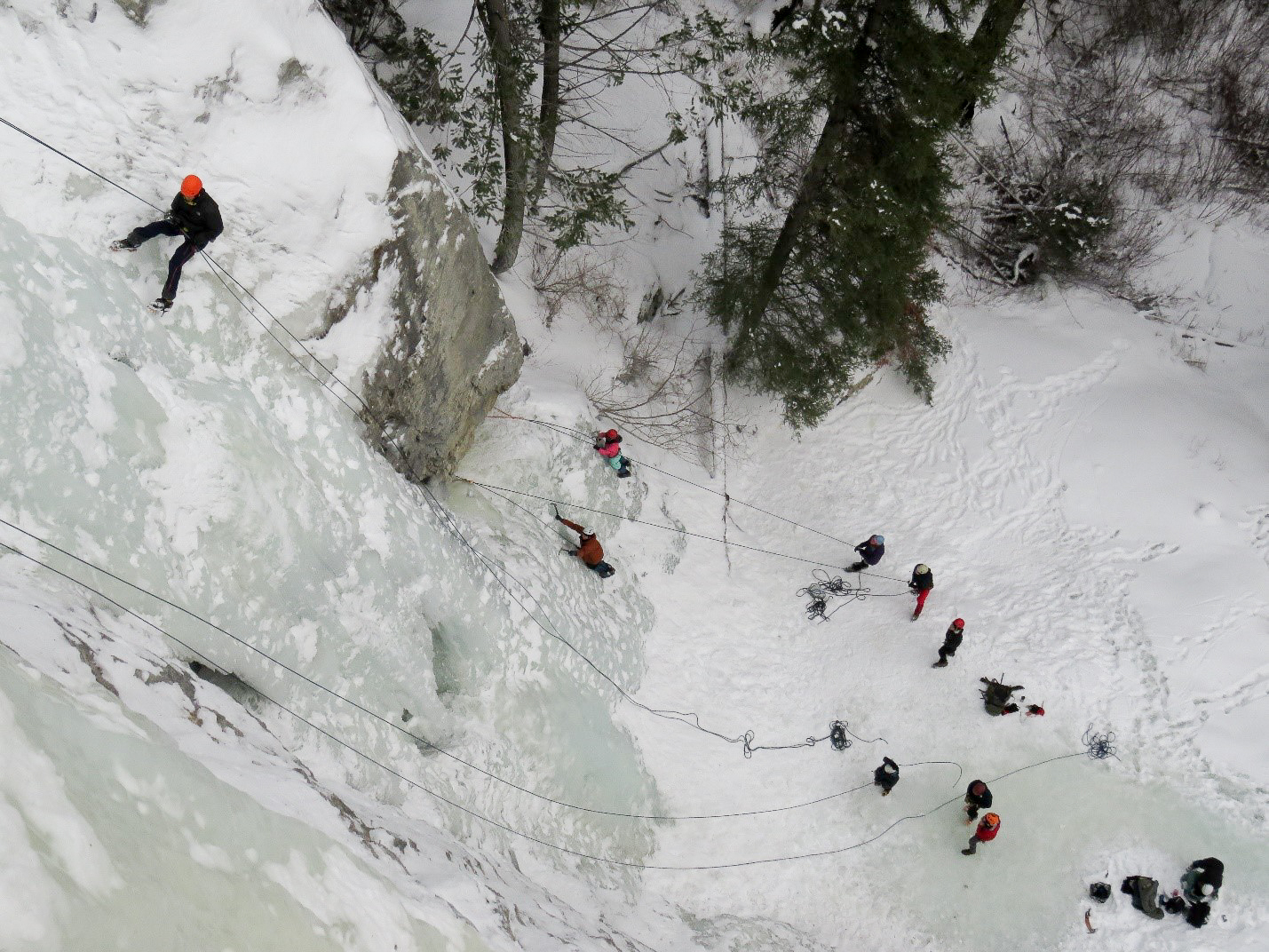 One Response to We climbed some ice!