In February 2016, I had a wonderful trip climbing in Red Rocks, Nevada, with a group of fantastic people. This year, I wanted to go back and get on some new routes. I assembled a group with some of my favourite climbing buddies and other acquaintances, including Shell, Nicole, Rae, Lianne, Manu (from last year), Christy and Jon.

This year, we decided to book an airBnB instead of a hotel, and booked the same one Shell had gone to 1.5 years before with a different group. This airBnB was fantastic! We had 4 bedrooms, each with a double bed, 2.5 bathrooms and a kitchen. The airBnB was about $22 per person per night after all expenses. Costs were relatively cheap for food because we could cook for ourselves. Because we were a group of 8, we rented two vehicles instead of one (note to self and others: compare prices from airport rental place to other nearby rental locations, and ensure all taxes and fees are included in booking). Although having two cars was more expensive, it was definitely nice to have the flexibility and ability to divide the group as needed.

The trip was scheduled for February 18th-26th, immediately after the Vancouver International Mountain Film Festival (VIMFF), which I helped out at this year by co-running two nights of the festival at a new UBC venue. Unfortunately in the week leading up to the trip, the forecast called for rain on the day of our arrival. And not just light rain, but heavy rain (35-40 mm in a desert is a lot).

This forecast held true, and we arrived to Las Vegas on Saturday to find a very wet ground and rain still falling from the sky. This meant that we were not able to climb that afternoon, and instead bought our groceries for the week and pondered our game plan for the trip. In Red Rocks, you cannot climb for 24-72 hours after rain (depending on severity and warmth subsequently) because it is sandstone. This means that the holds can break off, ruining the climbs, but also that gear could pop out, presenting a safety hazard. The second rental vehicle, however, was being picked up Sunday morning, which meant that we could not relocate until the next day. We decided that we would pick up the rental vehicle Sunday morning, and then head to Joshua Tree for a few days of climbing. Nicole was going to stay at the airBnB in Vegas to catch up on some school work and we were going to meet her back there in a few days.

Joshua Tree National Park
Joshua Tree National Park is located in California (about 5-6 hours South of Las Vegas and Red Rocks), and is one of the best known climbing destinations in the area. Two desert ecosystems come together in this park: the Mojave and the Colorado, and it is beautiful. The area is full of the very cool Joshua Trees (pictures below) and a lot of really cool rock called inselbergs. The style of climbing is predominately crack climbing with traditional protection. In fact, most climbs do not even have bolted anchors, but instead you must build a gear anchor, and either down scramble (often class 4 scrambling) after cleaning the anchor, or sometimes there is a rappel anchor established in the area that services multiple routes. 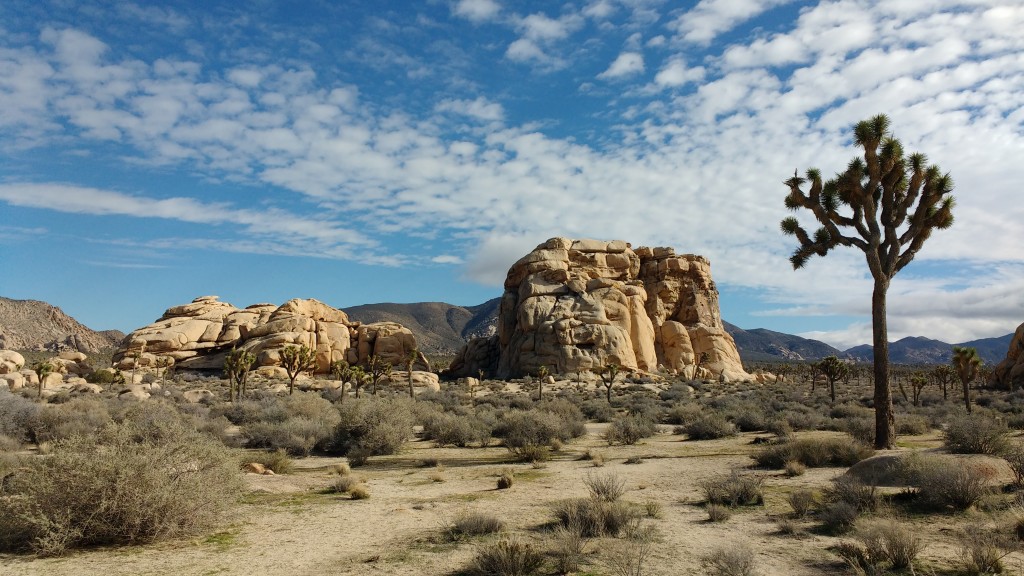 To continue reading, check out my full post here…

This entry was posted in Climb, Hike, Trip Reports. Bookmark the permalink.