Trip report written by Yudel, but posted by Kevin due to technical difficulties.

This trip has been on my to-do list for at least five years. So I was ecstatic when, after walking into the VOC office for the first time late Friday afternoon on the off chance there was a trip planned in the near future, Kevin invited me to join himself and Edward in skiing the Neve!

A group of four – Roland, Sherry, Kevin and Edward left early Monday morning for the requisite car drop off at Rubble creek before returning to the Diamond Head parking lot to ski up to Elfin Lakes. I made my own way later in the day, dropping my car off at the bottom of the logging road and hitching a ride up. On the way I learned that the record for the Neve from beginning to end is two and half hours! Not sure I believe that… The plan was for Roland and Sherry to spend the night at Elfin shelter and return the next day, while Kevin, Edward and I were to continue across the Neve. 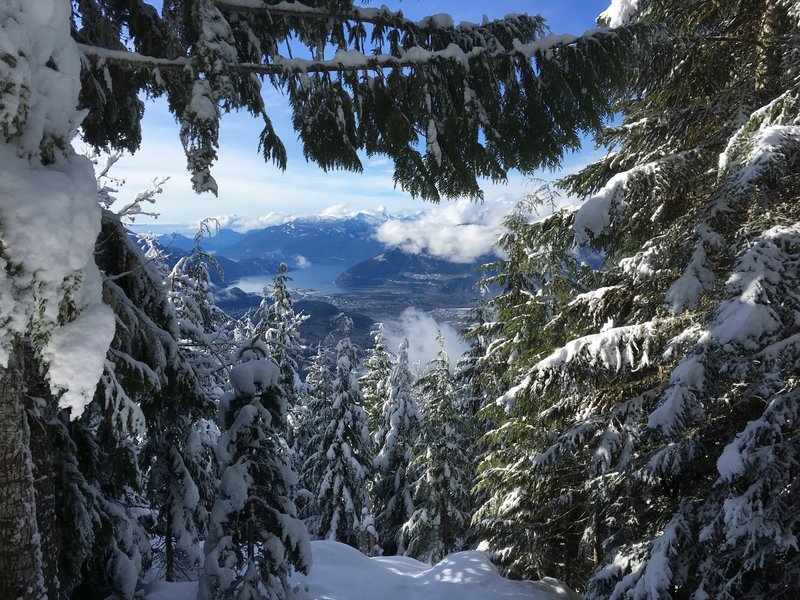 The skiing up to elfin was peaceful. There weren’t too many people on the trail by 2:30 in the afternoon, when I started out, and I enjoyed the quiet. A beautiful sunset greeted me as I reached the shelter 3 hours later, just as the VOC group turned up from a scouting trip past the shelter to check the avalanche conditions. Kevin’s note: We wanted to lay down a good skin track to the Ring Creek crossing since it can be quite tricky to find and eat up a significant portion of the following morning. We ended up not making it across all the gullies before dusk, but still saved ourselves 45 minutes of work the next morning due to having a nice track to follow. The weather was variable and we weren’t certain we were going to do the full trip, so it was wonderful to see the clear sunny sky early the next morning. A 7:00 am start turned into 8:30 when Edward decided to provide an avalanche crash course and the buried beacon just refused to be found! I for one was very happy to have the practice though. 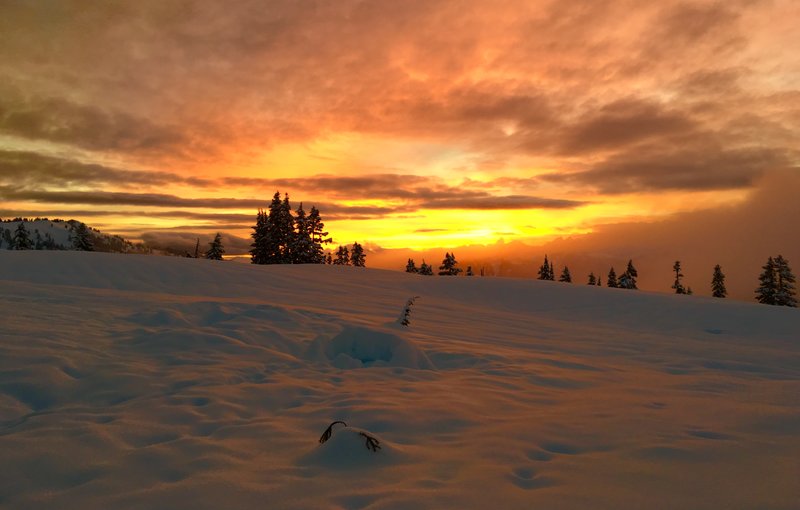 We said our goodbyes to Sherry and Roland, posed for a group photo, and headed out on the jeep road. The morning was beautiful – sunny and clear – and soon we were stripping off layers. After half an hour we reached the series of avalanche chutes and carefully crossed them one by one without incident. Looking back at our tracks through the chutes after reaching the bottom I thought how much steeper and scarier they looked from there! We then found the bridge over ring creek. Or thought we did. Turns out we crossed on a solid looking snow bridge about 100m downstream from the snow covered real bridge. No matter. But getting down to the river was the challenge. The only way down was steep and fairly icy. Edward bravely skied it down, managing only one fall, while Kevin and I took off our skis and walked/slid (I did most of the sliding). 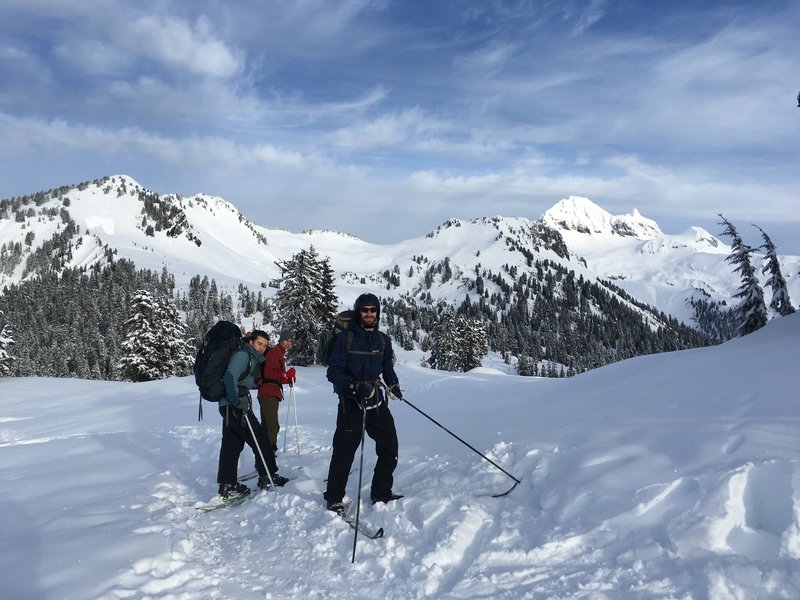 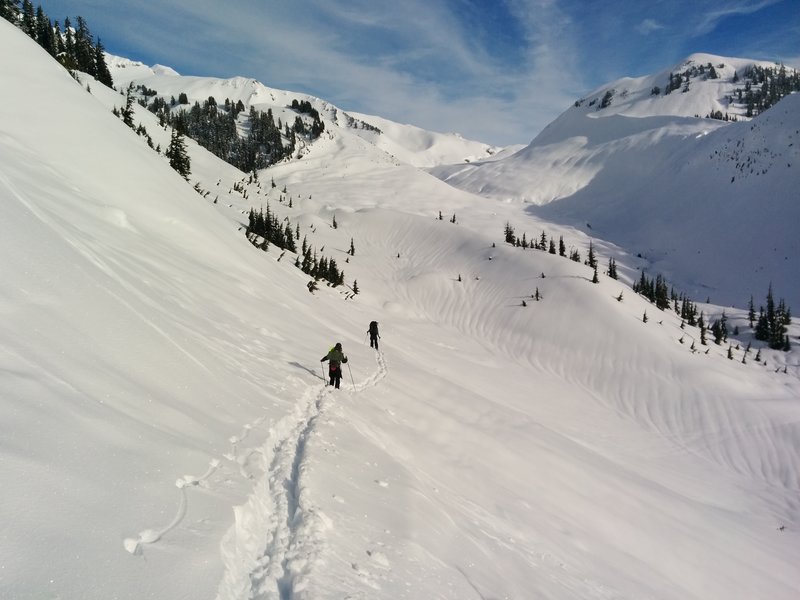 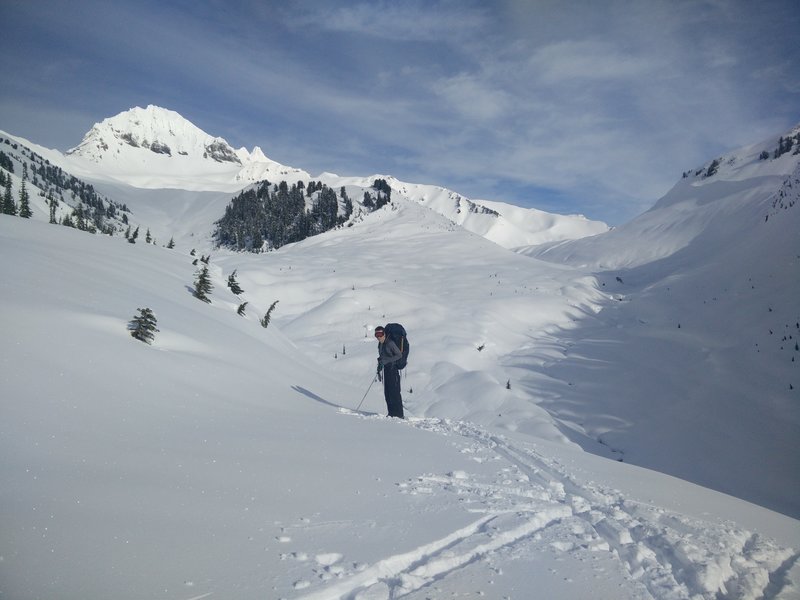 A much needed lunch break was had at the top of the climb from the creek near the top of opal cone. I realized I hadn’t packed a lunch so broke out my stove and had my pasta dinner. Good choice – the fuel would come in handy! It was exciting to finally be out on Garibaldi glacier surrounded by peaks on all sides, sun shining, and easy skiing to be had. Perhaps we were too happy because we ended up going too far onto Bishop Glacier, instead of making a left soon after reaching the glacier onto the Neve proper. Bishop stretched out pretty flat, rising easily to a ridge. We just assumed that ridge was where we were headed. Three quarters of the way across Edward informed us we were no longer following the GPS route. We decided to climb around the far side of the peak dividing where we were from the route instead of going back. It proved doable but we had to cross some pretty steep looking terrain and had a difficult climb up to the 2100m high point. Sprits began to lag at this point. But once the ridge was gained and we met up with the GPS route again, we were all smiles. 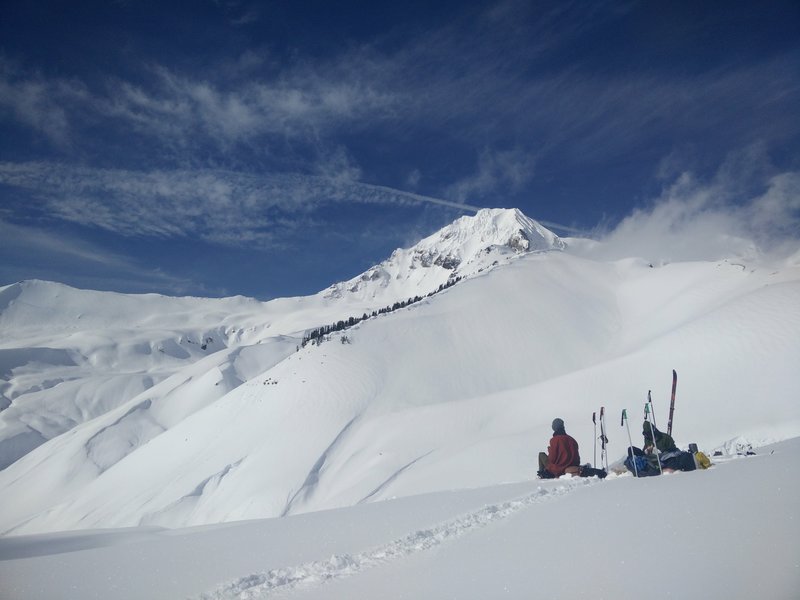 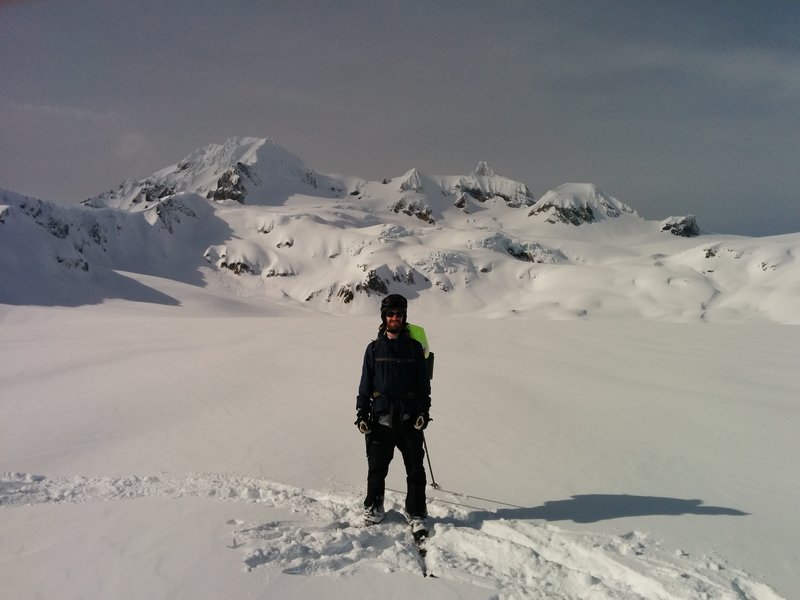 Clouds began to threaten from the west, but visibility held as we made our way through the crevasse area to the spectacular shark fin. From there we had great fun downhill powder skiing a little too far and so had one more ridge to climb. Good thing we stopped to consult the map and realized the flat terrain below was labeled an ecologically sensitive wetland and not Garibaldi Lake! By then it was turning dark so we brought out our headlamps and had a thrilling run down to the lake. Kevin and Edward were looking great with their turns :). 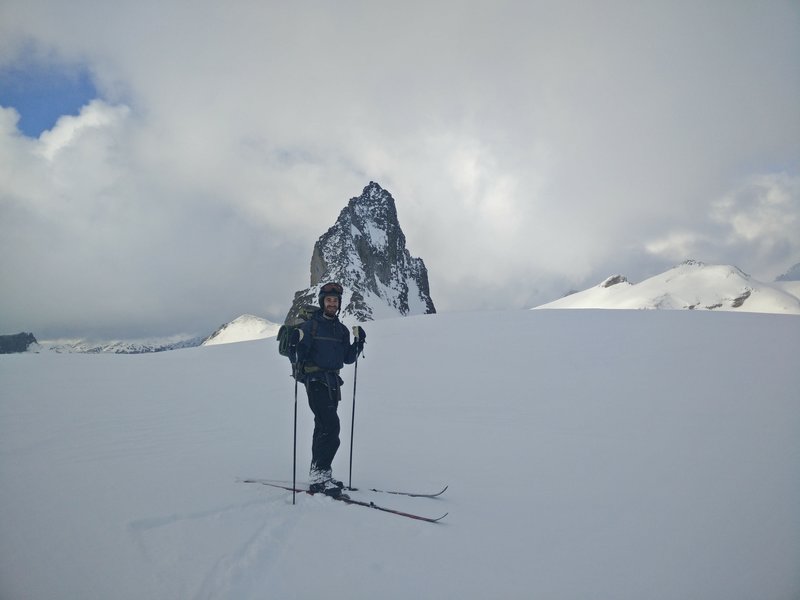 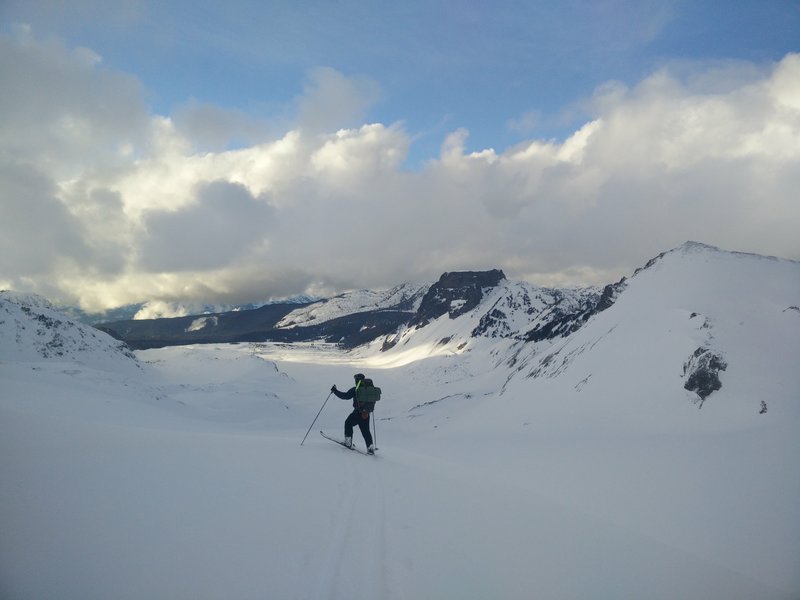 Photo: Edward Lim – What we thought was the descent to the lake. Notice table mountain to the right though, the lake is on the other side of it.

We planned on stopping for snacks at the glaciology shelter, but it seems to have disappeared into thin air. The downhill had energized me and I led the way from sentinel to sphinx bay a little too energetically it seems, as our meandering path on the GPS showed. Finally, 12 and half hours after starting out and completely exhausted we happily reached sphinx hut. I had trouble unfreezing my binding and so spent the first half hour in the hut with one ski on. Kevin helpfully poured boiling water on it and it came off. He also reminded us to bring a pole to the outhouse because of a wolverine warning! A fun night cooking noodles and watery pudding was had and a less fun and very cold morning greeted us the next day. The Garibaldi Lake crossing was beautiful and a significant portion of the rubble creek trail provided fun skiing. I even spotted what I think were wolverine prints! Rounded with claws retracted on the lake and then with three long claws along rubble creek not far from the outlet. Three km to the bottom the trail became un-skiable (Edward managed to ski it all the way to the bottom – way to go!) and Kevin and I walked the rest. We reached the car tired but happy :). 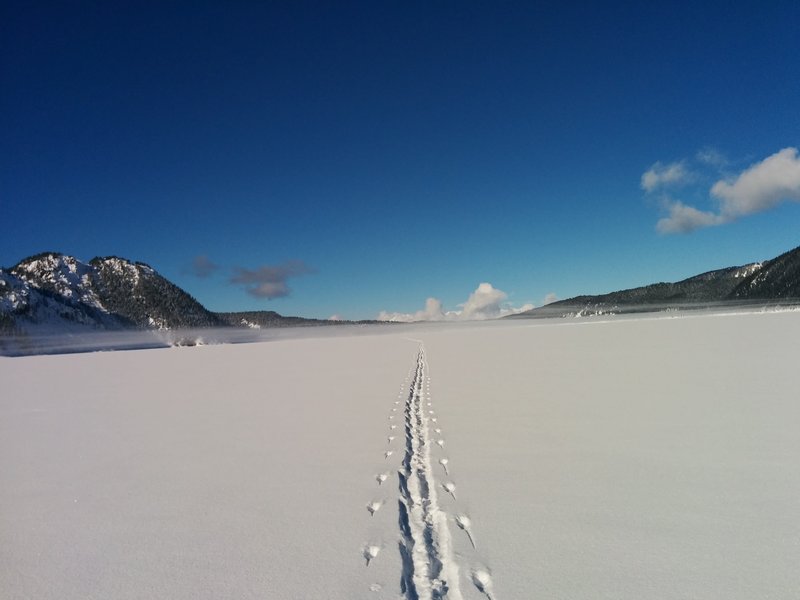 Photo: Kevin Burton – Lake crossing. Note that the lake is not actually slopey in real life.

Thanks Kevin and Edward for being great ski mates and allowing me to complete a trip I’ve always wanted to do! Your extra food came in handy as well. Thanks Roland for your helpful advice and warnings. Hope to see you on the Neve next time, Sherry!