The North ramp of Mt. Harvey; a winter ascent

Jakob is currently bumming it in Canada – climbing and skiing and generally living the #VanLife dream and I currently have lecture-less Tuesdays. So, what better way to amalgamate the two but by spending the 28th of February dangling off the end of an ice axe on the North face of Mt. Harvey.

It was an alpine start, to say the least; the alarm jingled at 2.30AM and by 3AM I was standing outside in the cold, waiting for Jakob’s van to pull up – It didn’t take long before he showed. It being the graveyard hour, the sea-to-skyway was car-free. We whizzed up the highway and by quarter past four we had our daypacks donned and set off into the darkness and up the forested trailhead just east of Lions Bay. Occasionally the dark, dense canopy above would break allowing us an uninhibited view into the starry vista above; the constellations clear and unaffected by any light pollution. That’s the wonderful thing about the north-shore mountains; they’re so close to Vancouver and yet you could be a million miles from home. 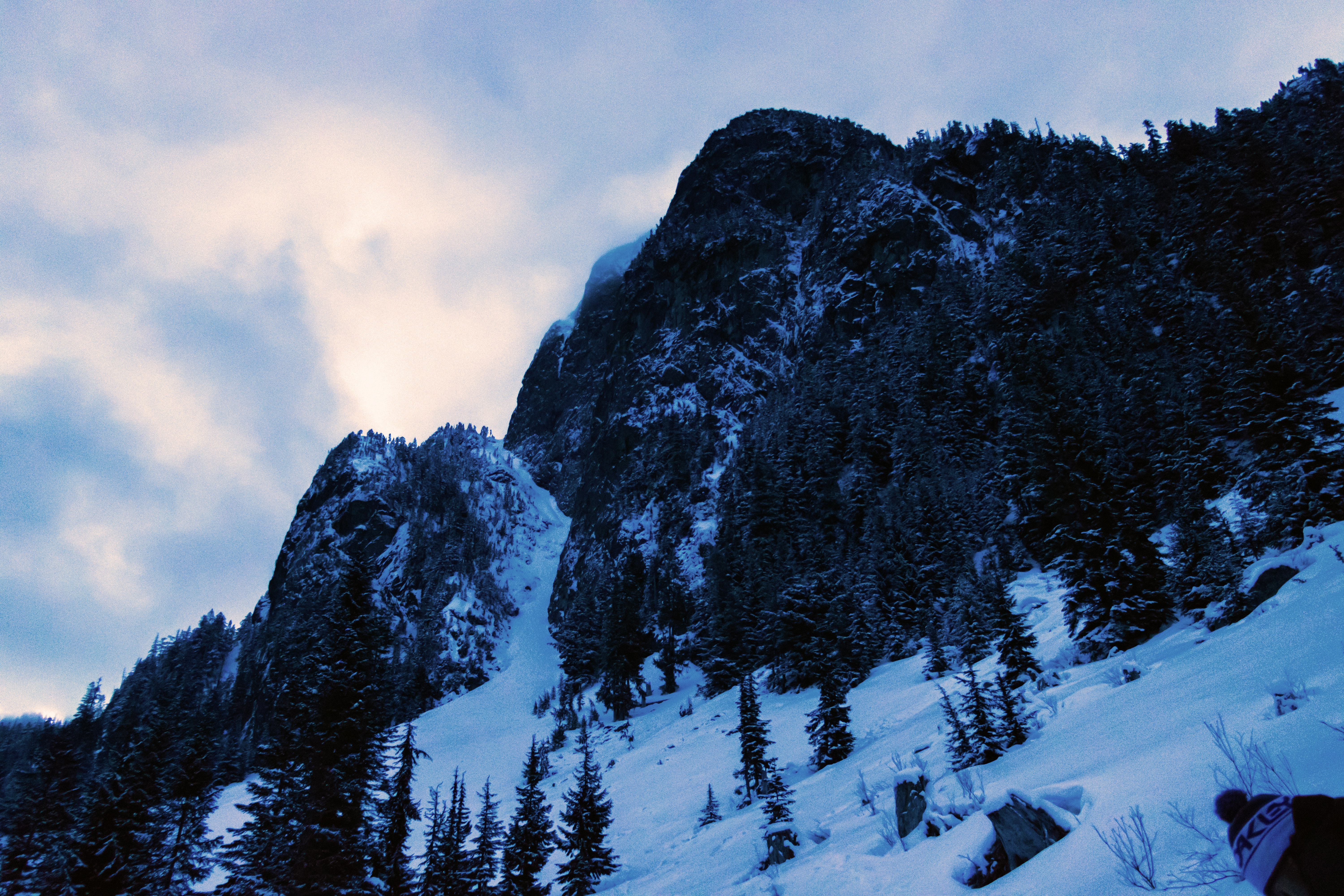 We hiked up the trail following our dim headlamps – the blind leading the blind. We made a few turns and bends, roughly following a trail plotted on Jakob’s phone. Time seemed to blur inexistently as we made idle chit-chat, our minds utterly focussed on what was coming: the north ramp of Mt. Harvey. 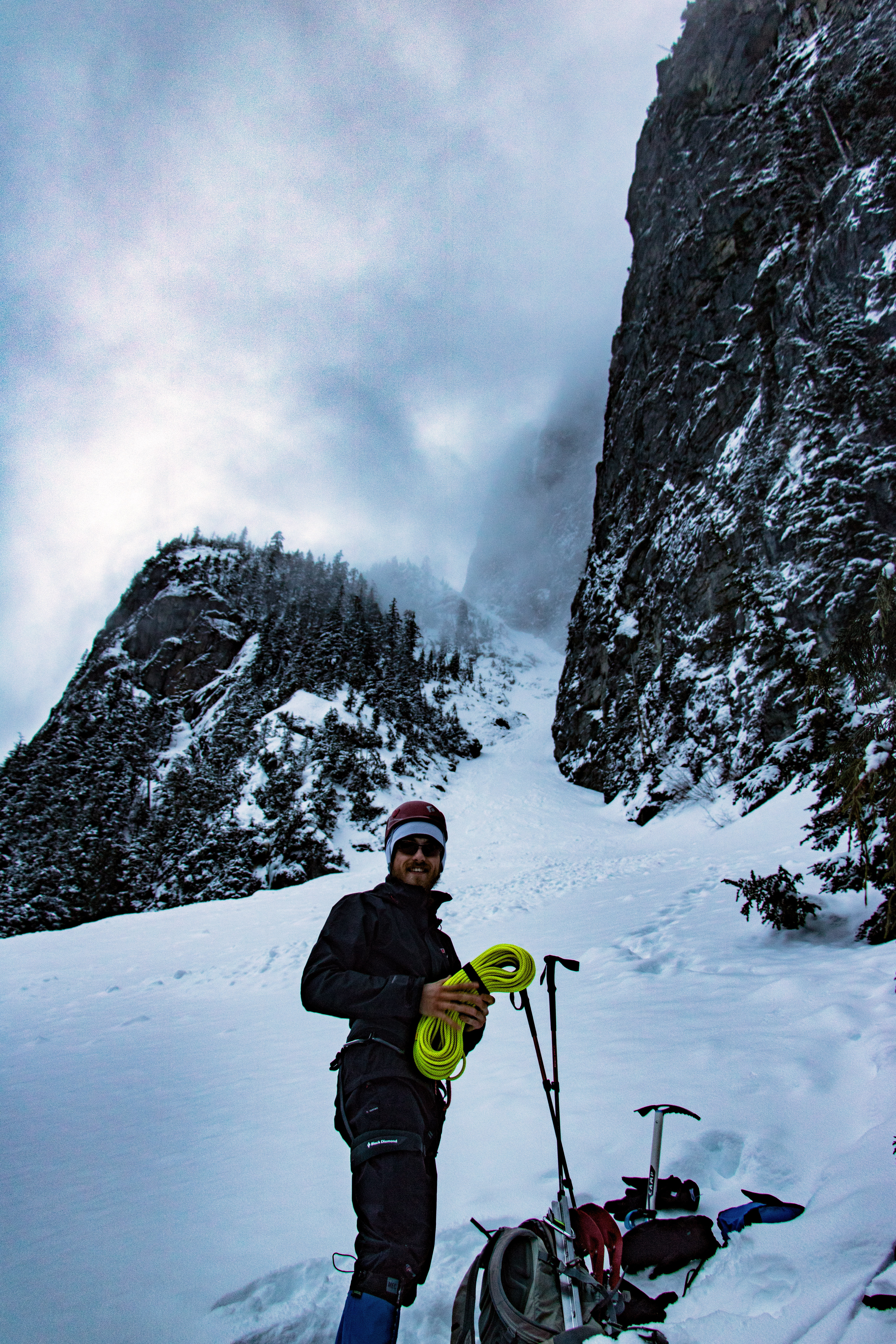 Out of nowhere, after about an hour of hiking we hit the base of the mountain, the pre-risen, early morning sun dimly illuminated it. We were shocked to see it so soon and were filled with excitement as we saw the infamous ramp over to the left which we slowly worked our way over to. The gradient was mellow to begin with but before long we had no choice but to get the ice axes out and put on our crampons. There was 600 vertical meters of snow and ice to climb, all eagerly awaiting us. 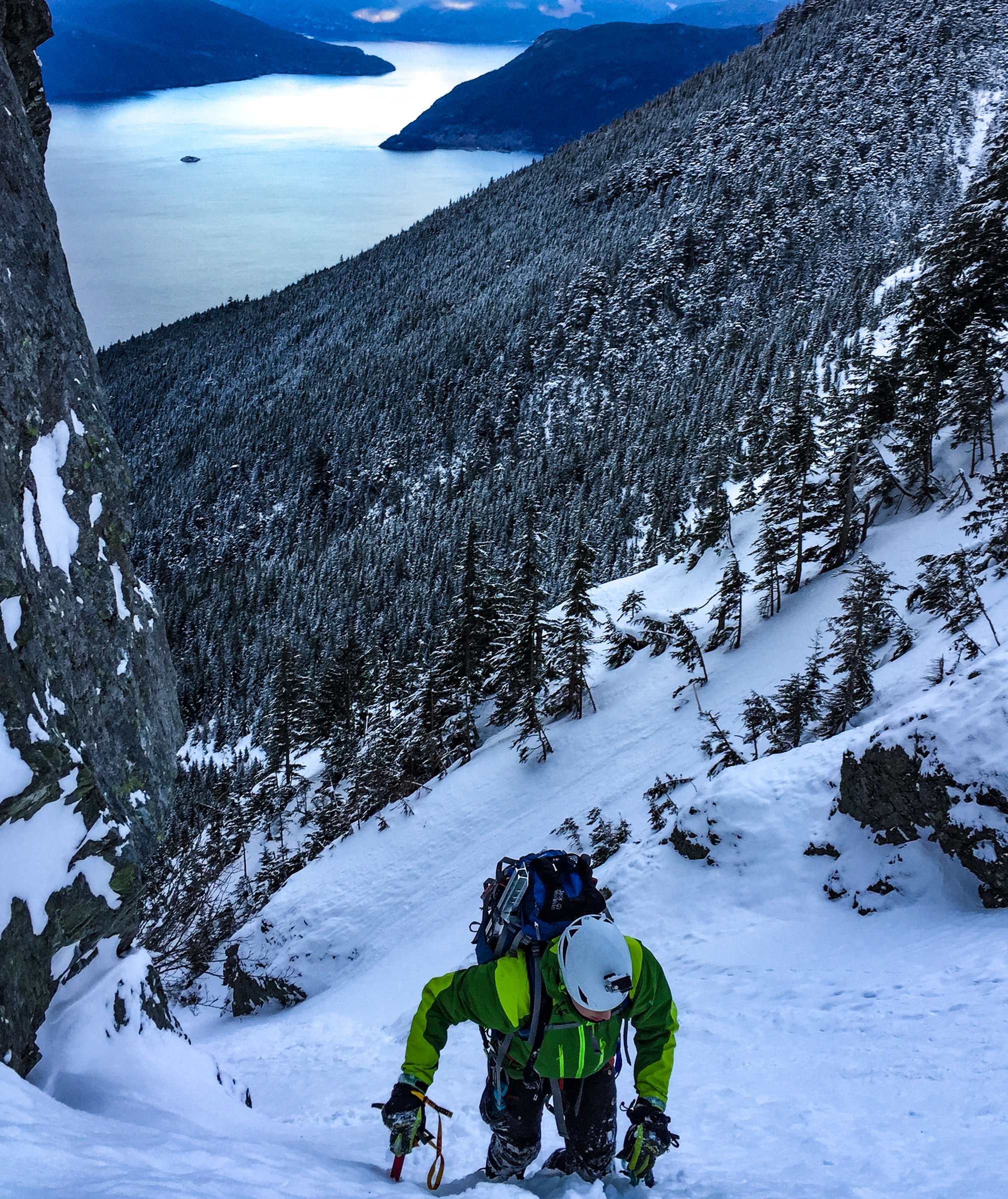 Over the past couple of days, I had had my eyes on avalanche.ca and that Tuesday was looking to be a solid day: moderate in the alpine and low everywhere else. One could almost fall into the trap of not bringing an avalanche beacon but I was very glad that Jakob and I had ours. I led the majority of the ramp and was constantly dancing and zig-zagging across the face as I felt the snow conditions change underfoot or through my axe. I was trying to find the best route; there might be fluffy snow in one location and only a meter away was a very evident, drummy slab. Near the bottom of the couloir there was chunky snow left over from an old size one avalanche and the whole way up there was evidence of sluff and tiny slab avalanches. The risk was not high, but always better safe than sorry.

We started free climbing up the huge, open couloir – our technique changing step-by-step as we read the varying terrain. In the light, fluffy snow, the shaft of the ice axe would be buried right up to the hilt and one only need take one kick of the boot as it was plunged deep into the powder. Then, only a few steps above the snow would be rock-hard, allowing a better hold for the axe and requiring a more carful crampon placement. Then, when we were very lucky, we would get ice; nothing feels better than swinging an axe and getting a good pick placement in the ice – it makes me very happy indeed – You kick hard a few times with the front points of your crampons, feeling your toes crush up against the front of the boot until you feel the teeth bite. 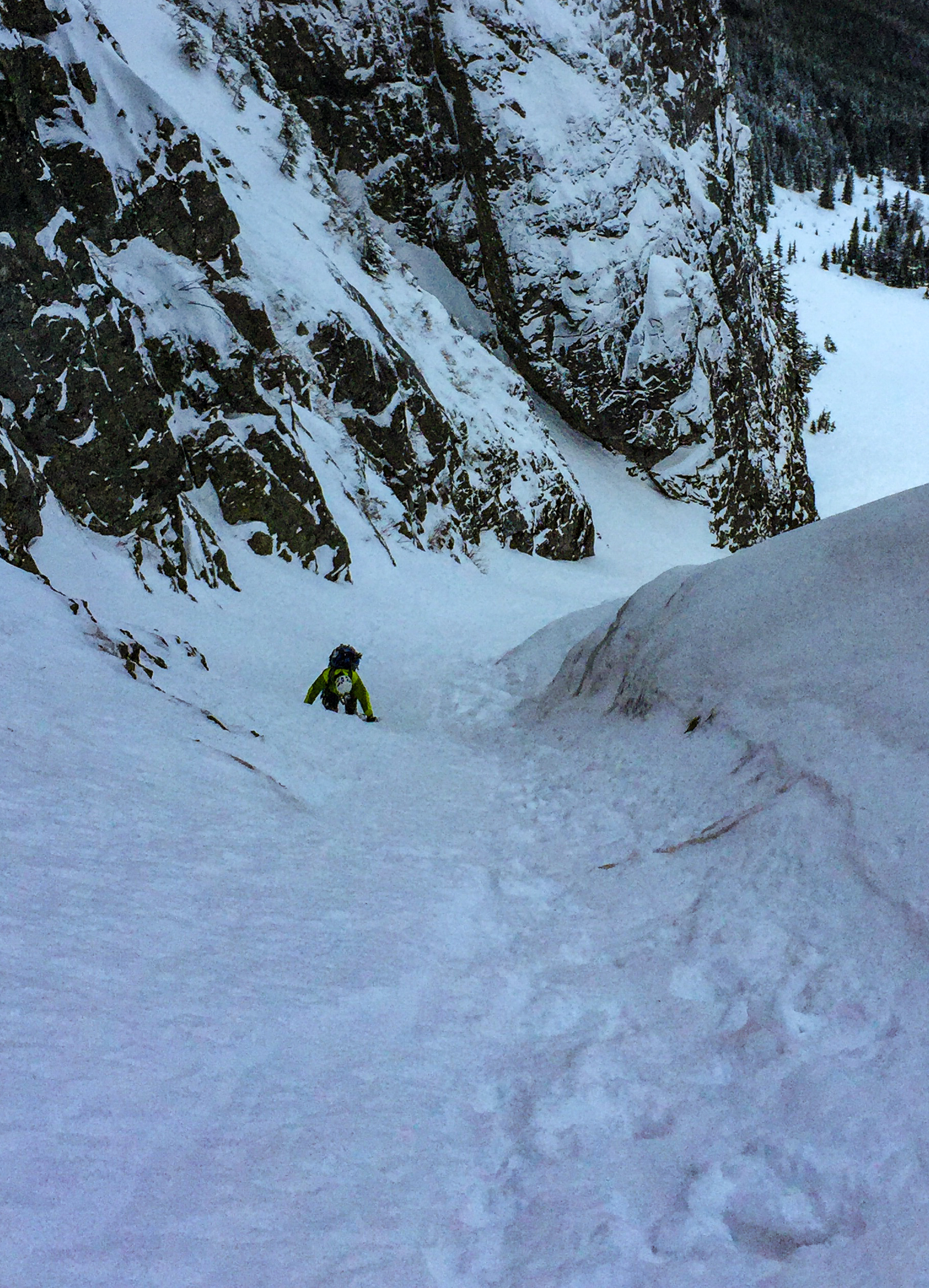 As we worked our way up the couloir, it narrowed drastically. At one icy patch, it became so narrow that there was only one line to take: the avalanche path. Hastily, we worked our way up and out of that section. It was fantastic climbing, the best winter mountaineering I’ve done without a doubt; a long, semi-technical ascent of uninterrupted wintery-goodness. The ramp veered to the left as we ventured further up, in parts becoming very steep (60-65°) – especially for travelling unroped. In theory, we could have used a running belay the whole way up but it would have at least doubled the climbing time taken – time we did not have; We knew a snow storm was coming in around 1PM and by the end of the ramp, we had already spent about 4 hours climbing the north face. It was simply a matter of careful axe and foot placement. Jakob and I came to the conclusion during post-climb monch in Wendy’s that when you can’t make a mistake, you don’t make a mistake. Every move imperatively must be correct, one foul slip and you’re a gonner. 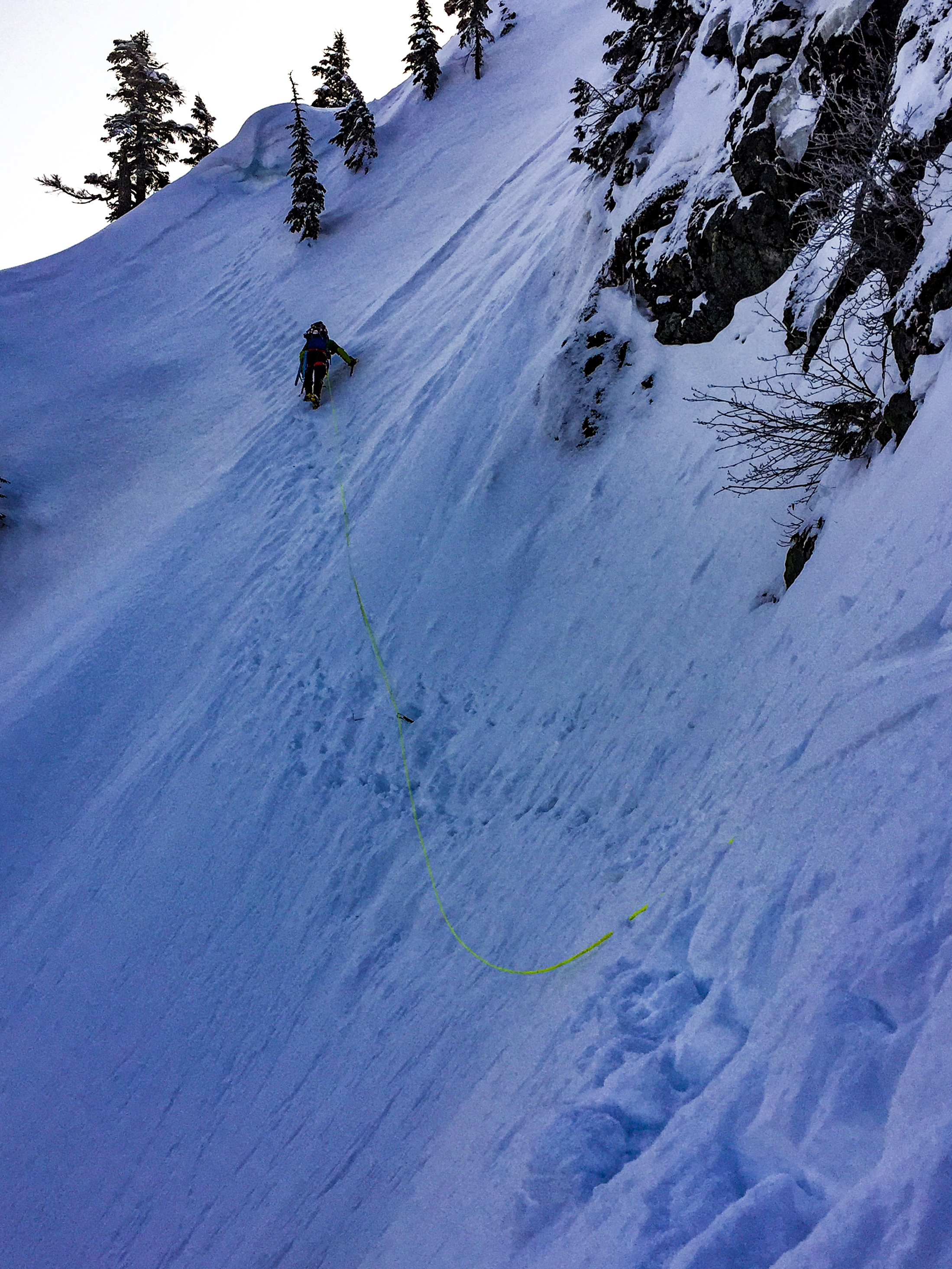 After about three hours of climbing we reached the toughest part of the ascent – a steep, open traverse leading from the top of the couloir over to a ledge at the base of the final climb. We had brought four pickets with us specifically for this section, where we would set up a running belay. Jakob had brought two ice axes as opposed to my one, so he led the rope. With him tied to one end of the forty-meter rope and me to the other, we continued up; Jakob set the pickets every ten meters or so and when I reached one, I would clean it and attach it to my harness. When the rope was fully extended, Jakob would belay me up (kind of…), using a munter hitch wrapped around an ice axe. It was slow going as we were both novices with this system but before long we had made it to the ledge, adrenaline fuelled and pumped to be so close to the summit. 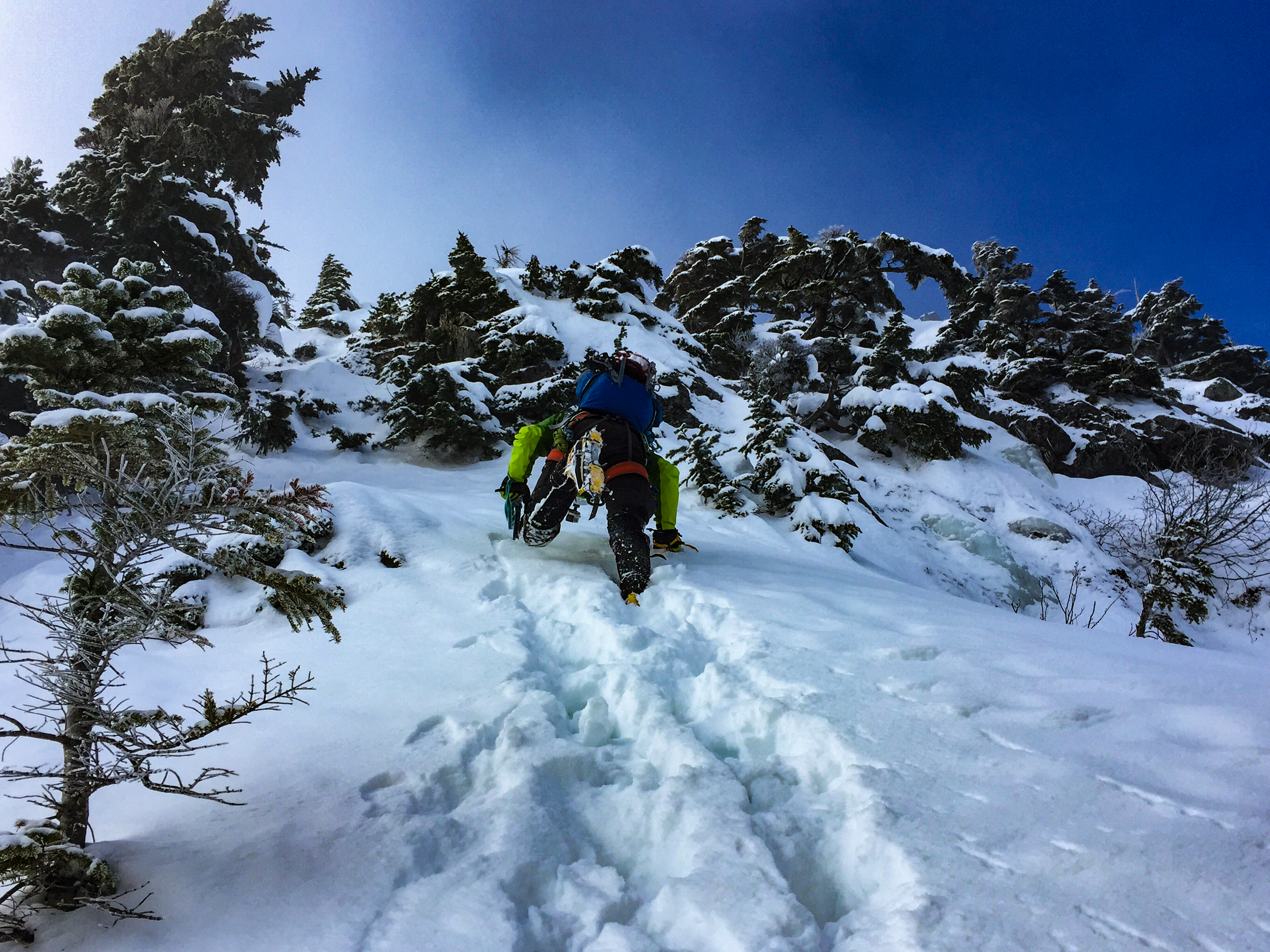 :-: Free climbing the final section up to the summit :-:

We could vaguely see some old, buried footprints leading straight up the side of the mountain, which I always think is quite a comforting sight – knowing that you’re going in the right direction. We followed the aged tracks up the sharp face. We were so close but this was no time to get careless – it was still a gnarly climb. Initially we thought about setting up some pro off the clinging, dangling trees but as we continued up we found it unnecessary.

:-: A slightly less epic, but still rad photo of me. Our tracks to the summit are on the right :-:

As we climbed higher and higher the snowy slope started to round out and as we came off the north face we were hit with a face-full of glorious sunshine. It warmed our chilly bones. We plodded up the mellow slope, sinking up to our knees in the sun-warmed, soft snow and when we hit the summit at 1652m we were greeted with the most phenomenal views down onto the north shore. The sea: a dark, aqueous blue, broken by a streak of white as a distant speed boat made horses across it. Craggy peaks towered straight out of the water all around – a picturesque fjord. Bowen Island and Gambier island and all the other tiny nameless landmasses clearly visible, poking their bobbing heads out of the water. We were just above the clouds and watched as they ebbed and flowed around us; them, everchanging and us, standing still – at one with the mountain. 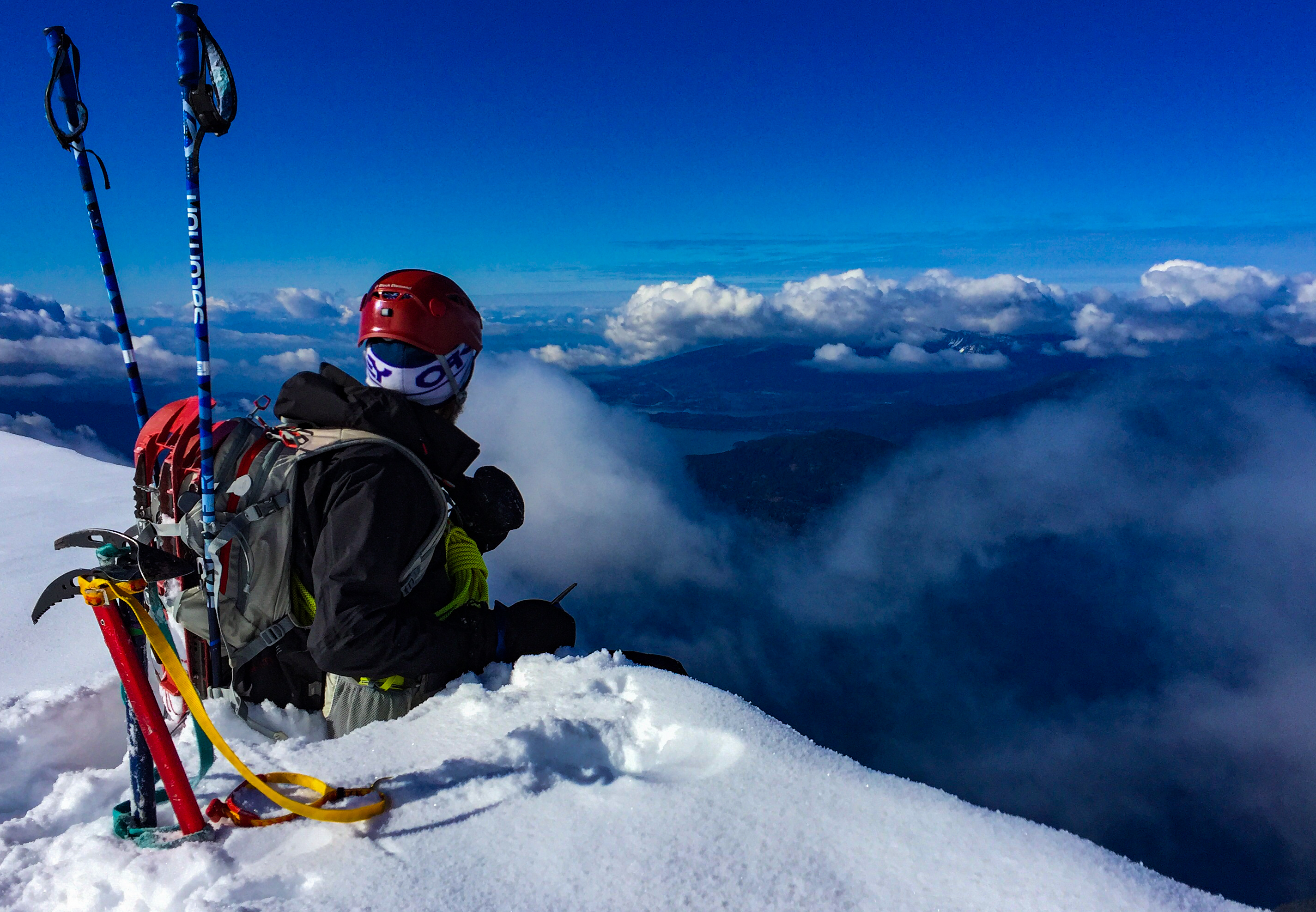 The mandatory summit photos were taken and just as we were getting ready to go back down a couple of friendly ravens joined the party and soared above us, finally settling down on a nearby rock. Very suiting indeed, I thought – two of us, two of them; all very peaceful. The mountain-loving ravens are famous in BC among mountaineers and big-mountain skiers. Some say that when someone dies in these mountains they come back and continually watch over others in the form of the raven. 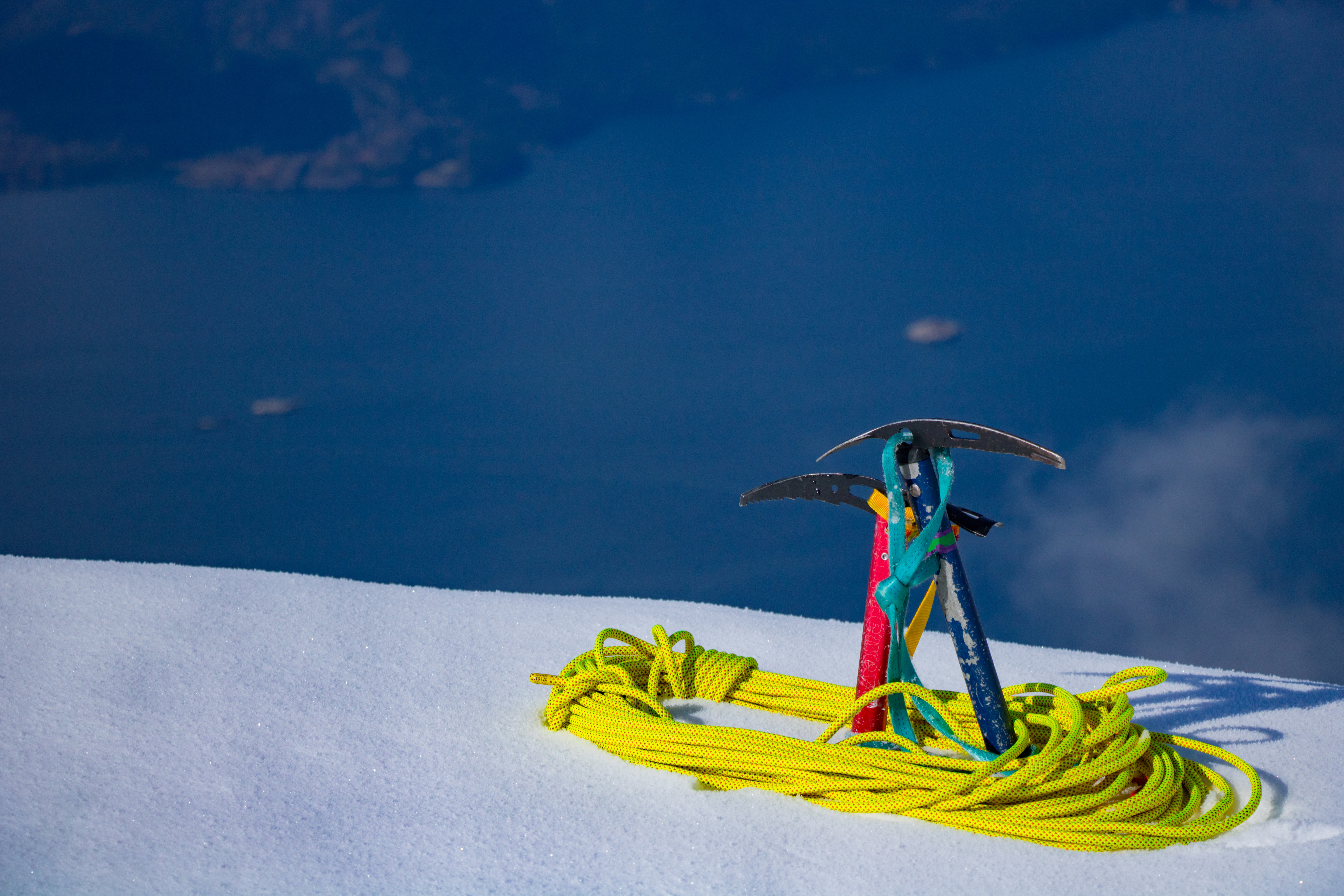 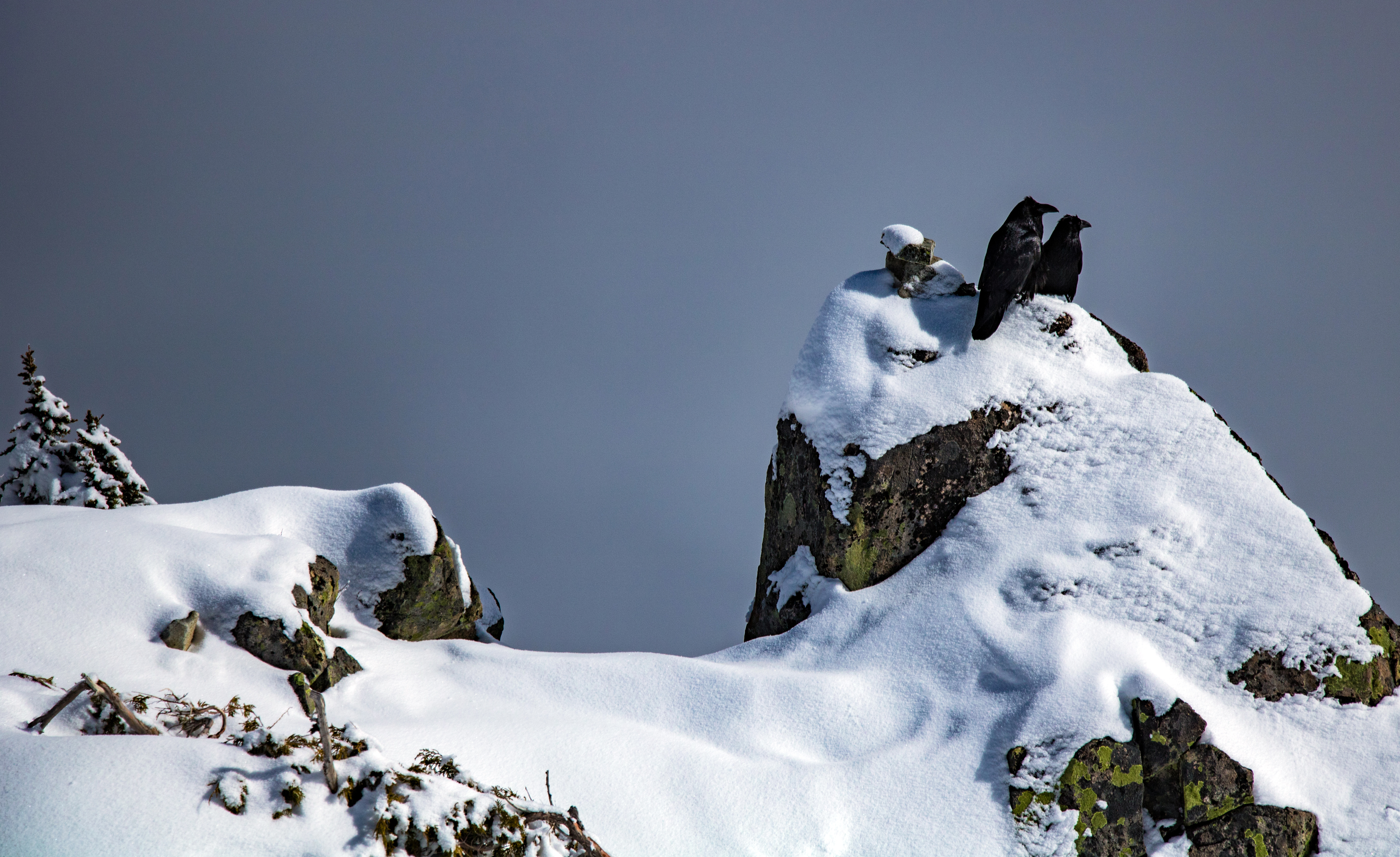 After giving ourselves plenty of time, we started our descent back down the regular trail of Harvey, soaking in the sun as we ventured down the south ridge. On the way, we say some huge cornices and managed to Glissade most of the way down through the trees which was hella-fun! Before long we were back at the car after a nine-hour day. We were thoroughly exhausted and thoroughly satisfied. What a great day it had been. 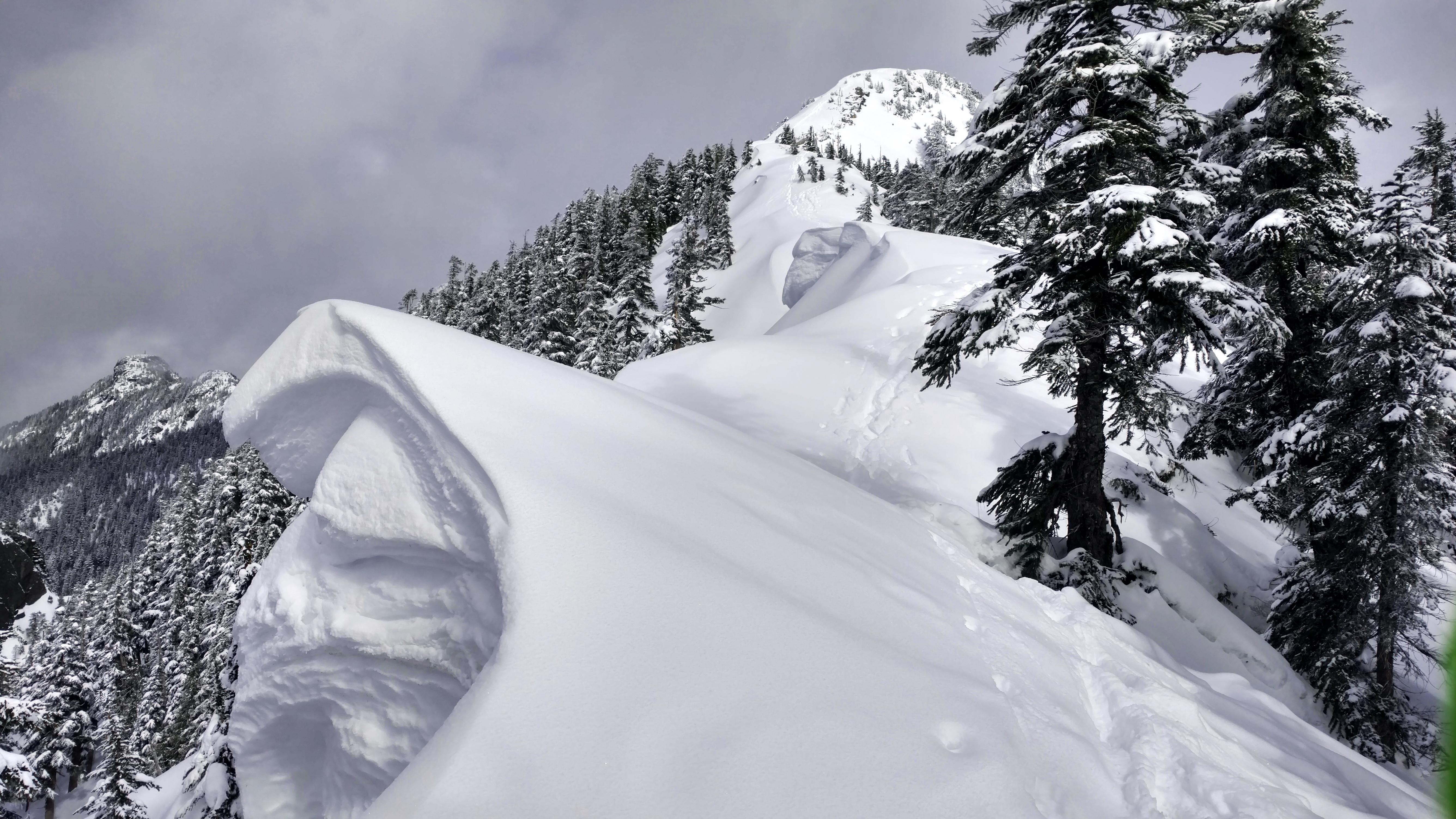 :-: The way down; a large cornice and Mt. Harvey in the background :-: