In search of new route to Squamish

When driving along Howe Sound on the way to Squamish or Whistler you must be enjoying stunning view on the mountains across the inlet. That view always ruins my plans on getting back the the sleep hours that I missed as a result of early wake up time. Every time I try to take a nap those mountains catch my attention and don’t let me sleep all the way to Squamish. If you like watching the mountains on the opposite shore of Howe Sound from Sea-to-Sky Highway as I do, you probably noticed that there are logging roads on the other side of the Howe Sound Inlet. As a bike touring enthusiast I must have thought of organizing a trip to that shore to explore if those roads are accessible for cycling.

According to some maps that I looked, there is no road that would connect West shore of Howe Sound to the rest of the roads on Lower Sunshine Coast so theoretically you can’t get there by car. It might be a bit confusing: There are logging roads on the West coast but they are not connected to the other roads on the Sunshine Coast or Squamish. The question was whether it was possible to get there by bike. Despite the absence of roads on the maps I pinned my hopes on distinct long clear cut connecting Rainy River Valley to the mysterious West Side Shore through Box Canyon. If the clearcut was passable at least by hauling the bikes on the backs that would open the entire new territory for exploration and potentially even a new access route to Squamish. The clear cut was visible on satellite images taken in year 2009 which is quite long ago and new trees had enough time to regrow. Lack of reliable information about this place kept me postponing the exploration for a long time until I got my hands on Canada Topo Map where I discovered that clearcut geographically coincides with the gas pipeline that goes from Squamish to Port Mellon. I got some hope that the clearcut was maintained and regularly cleared from alder. The goal for our trip was to test my hypothesis that the pipeline clearcut is accessible with bike and can serve as an approach to logging road network on West side of Howe Sound – more precisely to get to the pass between Rainy River valley and Box Canyon valley (Box Canyon Pass from now on).

On June 3rd Lukas Schreiber and myself (Ilya Capralov) made a second attempt(1) to get to the West side of Howe Sound. Our day trip started with a pleasant ride to Horseshoe Bay via windy and cozy Marine Drive. After 40 minute sail on a ferry we disembarked at Langdale and without too much faff headed north towards Port Mellon (Faff time drops linearly with decreasing number of participants). The road to Port Mellon is fully paved has around 200 m elevation gain but all of it is lost when you get close to the pulp mill which is the only object in the entire town located on the shoreline. After signing in at the gate that guards the plant by leaving our names, last names,  we proceeded on a logging road that follows Rainy River. The road is in good condition but has some short steep slopes that one of us who had a walmart-bike had to walk through (2). The road is followed by the gas pipe buried along the road. The area where the pipe is buried is kept clear from trees and usually is covered with salmon berries which attracts both hungry cyclists and not-so-hungry, and thus, rather peaceful bears. Though this year the bushes were all cut down so the berries were not as plentiful as last year. We also saw only one bear as opposed to previous year(3).

Since we planned to use the gas pipeline clearcut to reach the pass we were more or less following the pipeline all the way from Port Mellon. The pipeline stops following Rainy River road and deviates towards Canfor Road, then Varley South Spur road and eventually hops over the Box Canyon Pass (49.580390,-123.466587). On the Rainy River road we took a right turn to Canfor road. At that turn there is a drainage pipe on the left side Rainy River road, if looking north, with “to the mill” written on it. Also it is the only road that has some signage at the entrance. It says “deactivated road” (see the link to the route at the bottom of TR).

Canfor road and Varley South Spur road are very steep, have creeks crossing them every 200 m and the surface layer consists of large loose pebbles which makes riding very challenging. Though it is clear of alder all the way to the end of it. After about one km of steep road we reached a creek crossing. Since the bridge is down we had to wet our feet. Water temperature was chilling the core of our bones and the current was trying to drag our bikes into the waterfall bellow us. 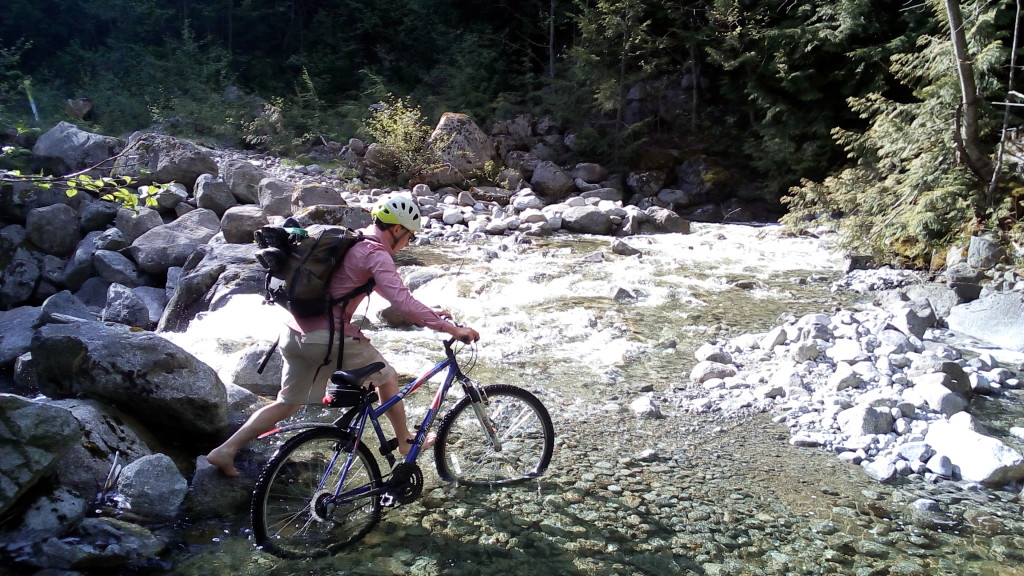 At the elevation of around 800 m we left our bikes on the road because they were only making us slower. After a few hundred meters on horizontal axis we hit the snow where the bikes would be totally useless.

My feet got all wet after two steps on snow because I forgot to equip them with winter shoes, but snow was pretty hard for easy hiking so we were glad we didn’t haul snowshoes all the way to the snowline. We were going quite fast and in 20 min we reached the end of the road wich didn’t look like so because it was continued by an unnecessarily wide clearcut in the end of which we could see blue sky which was a good sign! The slope on the clearcut was around 20 degrees (Lukas, correct me if I am wrong), so climbing it on a bike is impossible. Unfortunately I can’t say if there is a road in that clearcut and if the bushes grow there because all of this was at under at least 1.5 m of snow. What I can say is that the clearcut has no alder all the way to the top of the pass and at least 300m down into Box Canyon Valley. 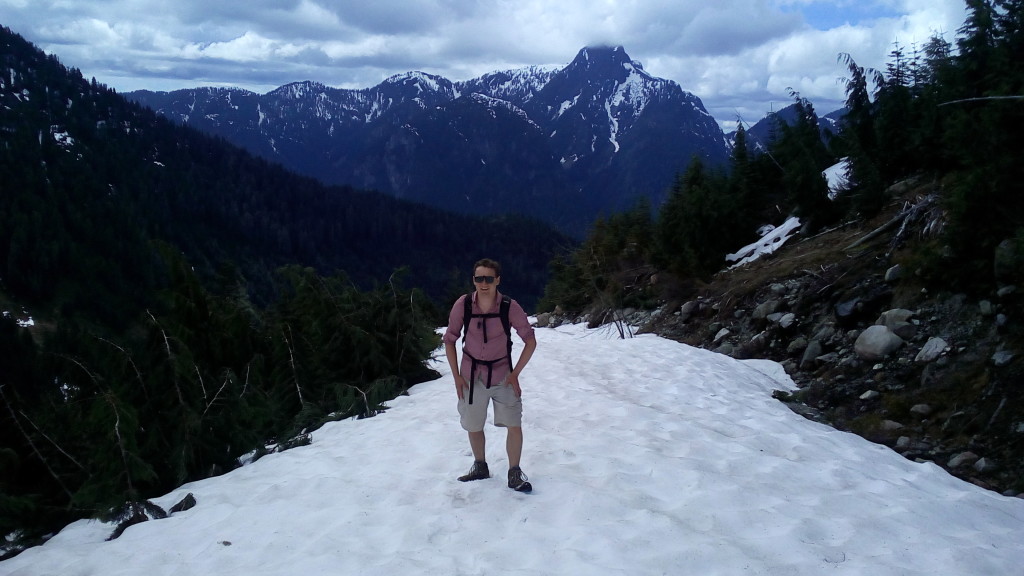 Looking back at the gas pipeline clearcut. Credit: Ilya Capralov

We reached the Box Canyon Pass at around 3 pm and were rewarded with a view on unexplored lands. What we saw was quite reassuring: The clearcut continues for at least 300 m down in Box Canyon Valley before it turns right. In about a kilometer away from us, on the other side of pass we saw a fresh clearcut patch and a logging road that was used to carry the logs from it. The possibility of Howe Sound West Shore bike expedition is confirmed! 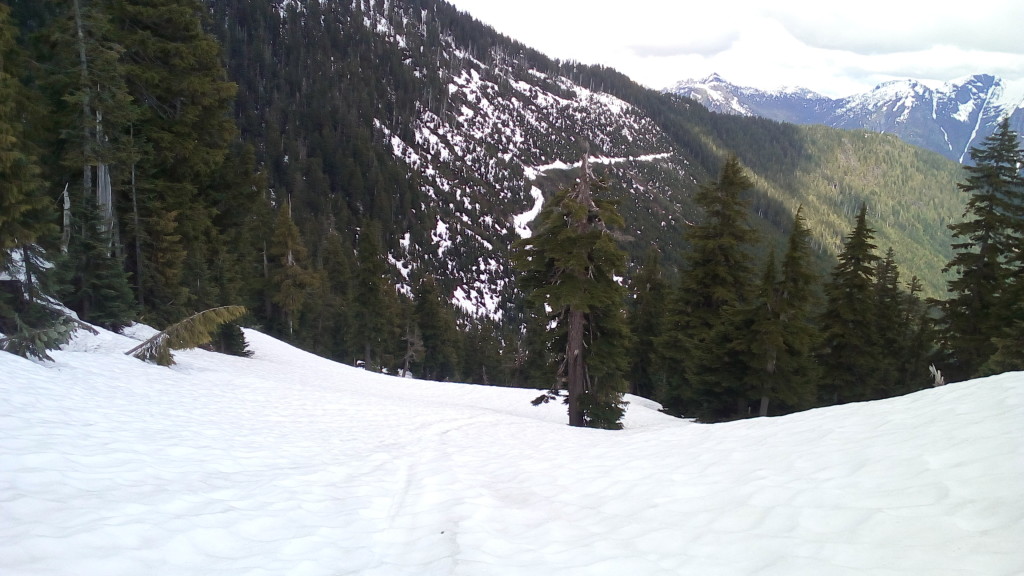 Beyond Box Canyon Pass (This isn’s the fresh logged patch mentioned in the text. We couldn’t take a good picture of that one) Credit: Ilya Capralov

The only variable that remains unclear is what are surface conditions in the clearcut bellow the surface. If its all 1.5 m spiky bushes, then the climb from the end of the road to the pass and down to the logging road will take hours and might make the expedition to that area unfeasible in terms of time required. But I am pretty optimistic. Let me explain: While going up on Canfor Road we saw ATV track that was going around a fallen log, so I assume ATVers can make it all the way to the top of the road and I can’t see any reason why they wouldn’t go all the way to the pass and beyond, which means there is high chance that there is an ATV track in the clearcut under the snow which is good enough for us to haul the bike over the pass and get to the unexplored logging roads.

On the top of Box Canyon Pass we had a lunch, took a few pictures and started going down. The way back to Port Mellon was way faster because it goes down all the way. We were one hour early to the last ferry. After sailing back to Horseshoe Bay we took a bus to Downtown. 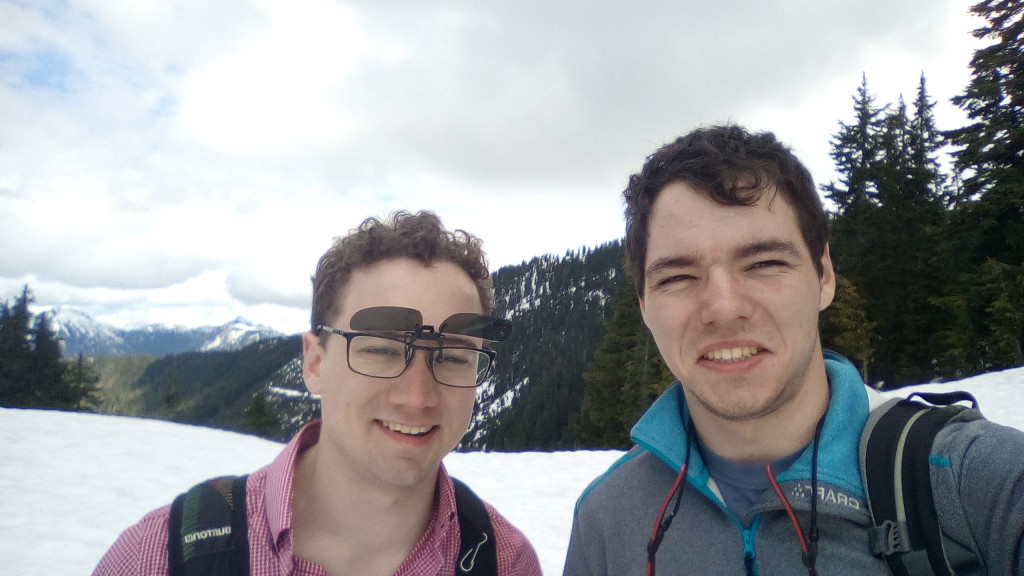 I am planning a 3-4 day trip in September to reach the Box Canyon Pass, explore the logging roads on West shore of Howe Sound and possibly even get all the way to Squamish River. Keep an eye on trip agenda!

___________________________
(1) I made my first attempt to get to Box Canyon Pass last year around the same time alone. That time I had much more optimism, and I thought I would be able to easily reach the pass, go beyond it and set a tent in Box Canyon Valley. Since I was carrying all camping stuff the riding was extra hard and I even got a heat stroke, so I had to turn back and go to Rainy River Lake instead. It was still a fun adventure. Back to main story

(2) After the first attempt to reach Box Canyon Peak I decided to take some serious steps to improve my chances in next attempt. Cycling in Coastal BC is like nowhere else where I’ve been before. The most outstanding differences are the following: The steepness of the roads, loose pebble road surface, low population density in the outback. Latter makes a traveler carry more stuff than one would need say in Europe – a tent, more food, more clothes, more spare parts, etc. This adds up weight and difficulty to already insane slopes with loose gravel on them. In order to be able to keep my but in saddle I made the following changes to my setup:

(3) Last year when riding in that area the salmonberry bushes were intact and there were herds of bears foraging on them. I wonder what will happen to these bears this year with limited supply of berries. Back to main story

5 Responses to In search of new route to Squamish