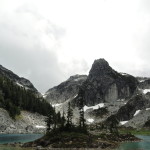 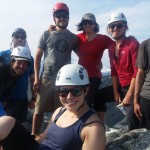 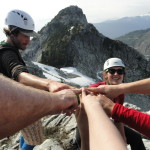 Malcolm in the Middle peak celebration with Martin in the background 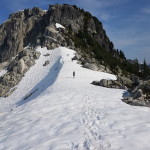 The journey began early Saturday morning when myself (Glen) and Mike picked up our car mates and took off for the weekend. We met briefly at Galileo’s Café at 8:00AM before continuing onto the Watersprite trailhead by following the Mamquam River Forest Service Road. At the 16km marking, make sure to turn right instead of left. Both roads work, but the left road requires more clearance than my Subaru Legacy can handle. Mike made short work of the road, but I decided to make my group walk. Luckily we hitched a ride in the back of a pickup truck and we were not too far behind the rest.

Together, the eight of us: Else, Simon, Mike, Lea, Mirtha, Aaron, Bobby, and myself took off. The trail is very well marked, and easy to follow. After hiking 8.5 km and climbing the requisite 660m in 3 hours, we arrived at Watersprite Lake (1450m). The lake is surrounded by interesting peaks, and fun looking scrambles. The new BCMC Hut, has brought a lot of traffic, and a new official-looking campground (complete with a brand new outhouse) has been set-up across the lake. The campground is situated on some gravel, less than 100 m from the lake away from sensitive vegetation. We set up camp, went for a dip on this hot summer day, ate some lunch, put our helmets on and took off for the hills. Our goal was the peak most visible from our campground, which we thought was Martin peak. After an hour of hiking, we arrived, and realized we were sitting on the peak in the middle of the two most prominent peaks of Gibson and Martin. We decided to call this peak Malcolm in the middle (≈1780m). After a quick peak bagging celebration, we decided to follow the ridge towards Gibsons peak.

The majority of our group decided to bushwhack around the south side of Gibson for a less intimidating ascent. Bobby and myself, decided to try going up the steeper north face, which in theory, may have been quicker, but due to a certain lack of skill and confidence, we arrived at the top of Gibson (≈1830m) 20 minutes behind the rest of our group. Stoked on life, with great vistas and good company, we decided to return to camp along the ridge just east of Gibson, completing a very cool circuit. Before the rain began, we had a nice dinner complete with a dessert potluck which included dishes such as brownies, pie, chocolate covered almonds and apple cider.

After a good night sleep for mostly everyone, maybe except for Simon whose Bivy was not as waterproof as hoped for, we began our return to our car. Thanks to Else Bosman for organizing the Watersprite Lake trip. We all appreciate it.

Future sub-trips from watersprite: It would be possible add to our circuit by scrambling Martin peak, and watersprite tower. There is also a ridge that branches off of Gibson south towards epiphone and fender peaks.  Another cool scramble would be up towards Dreadnought peak north east of the lake.