By Enrique (Kike) Colomés, with edits by Alberto Contreras. Photos by Alberto, Kike, and Mélanie.

This is not a typical report of a VOC trip, it didn’t occur in Vancouver, not even in Canada… even more, it happened in Europe, specifically in the Pyrenees, Spain. Perhaps to many people´s surprise, Spain has pretty high mountains, some snow, even a couple of pocket glaciers.

Romain and Mélanie are currently living in Toulouse and I live in Barcelona. The three of us used to be VOCers last year, and Alberto (current VOCer) was coming to visit friends and family in Spain. So we didn’t have another option apart from organizing something half way between Spain and France.. We decided that our target will be “Pico Aneto” (3404 m), the highest peak  in the Pyrenees,which Alberto had wanted to climb for a while.

All of us were enthusiastic and started an email thread in August or so.. Oh, I really miss all the faffing emails… After some discussion, we decided to meet in Benasque (the closest village to Aneto, where I and Alberto have been going for the last 15 or so odd years, without knowing each other) the Thursday evening and to attempt the summit as a day trip via the Renclusa refugio route. It is just a hiking route, if a bit longer than your usual day trip,  with glacier travel. 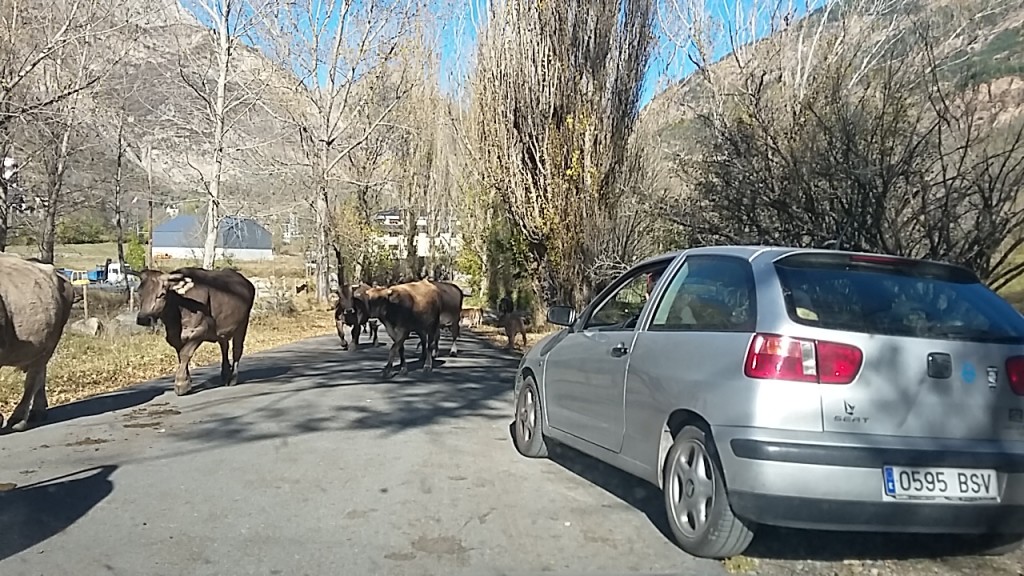 But it was not going to be that easy. Just one hour before leaving Barcelona, I received an email from Alberto: “I am sorry, I will arrive on Friday”. Come on Alberto, faffing even before arriving to our destination! The excuse this time was the lack of car…

Mélanie and Romain were also astonished. But we decided to go the same Thursday. It was a good option: what a wonderful night: beers, wine, cheese, good company… and actually (relatively) CHEAP.

Since Alberto was arriving late, we decided to rent some gear (ice axes and crampons for my friends, who usually don’t do outdoor activities) and buy food for the following day. Alberto arrived in the early afternoon and after lunch and no siesta (which means in Spain 15h), we went to harvest some wild mushrooms. We weren’t lucky at all (the following day a friend told me that this year has been a disaster – a very dry autumn, so it wasn’t just us) and so returned to Benasque empty.

My friends arrived before dinner (21h) and we cooked longaniza (a traditional pork sausage from the area) with potatoes and onions in the oven. So good! We drank some local Somontano red wine and went to bed around midnight. [Note from Alberto: all went to bed except for Kike, who decided to work on his thesis until 2AM.]

The following day we woke up at 5am and after a nice breakfast with pan con tomate (bread rubbed with ripe tomatoes, typical from Cataluña) and some coffee, we drove to the Besurta trailhead (2050m) where we left the car. We started hiking at 7.15am. A bit late, especially when the sunset is at 19 pm. Obviously, this being Europe, the parking lot was full of other hikers with the same objective. Gone are those days of BC quiet and empty isolated mountains.

Anyway, we began hiking in the dark, seven people and just two headlamps and one mobile phone lamp. The second headlamp had no juice in the batteries.  We clearly were well prepared.  It wasn’t the best, but the trail is very good and I know it perfectly (it is not precisely my first time there). We arrived to the Renclusa hut (8am, 2200m), which is more similar to a hotel than to a hut. The diesel engine providing electricity to the whole complex was rather noise and disturbed the beauty of the area. 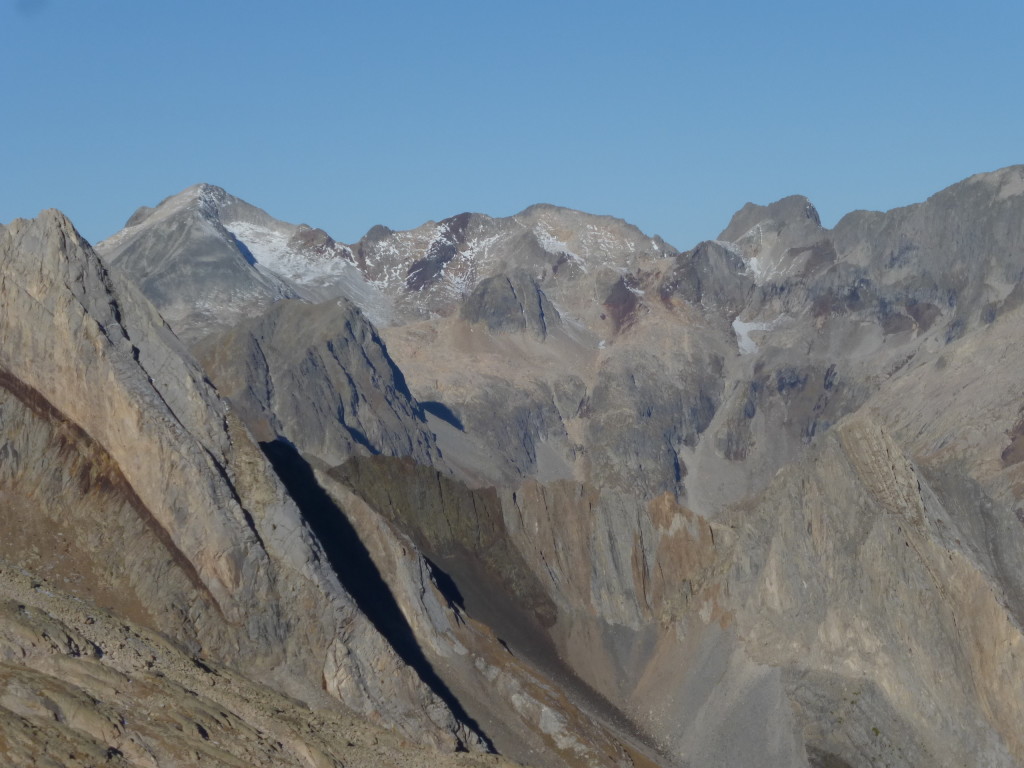 Steep Alpine faces in the Pyrinees – note the absence of bush

We made a 10 min stop, and when we were ready Alberto decided that he needed to go to the outhouse. Well, it actually is a fully functioning bathroom with even hot showers. Really Alberto? Faffing again? Nobody believed it. After that, we kept going until we reached the Portillón (11am, 2900m), a recognizable buttress which we had to cross. 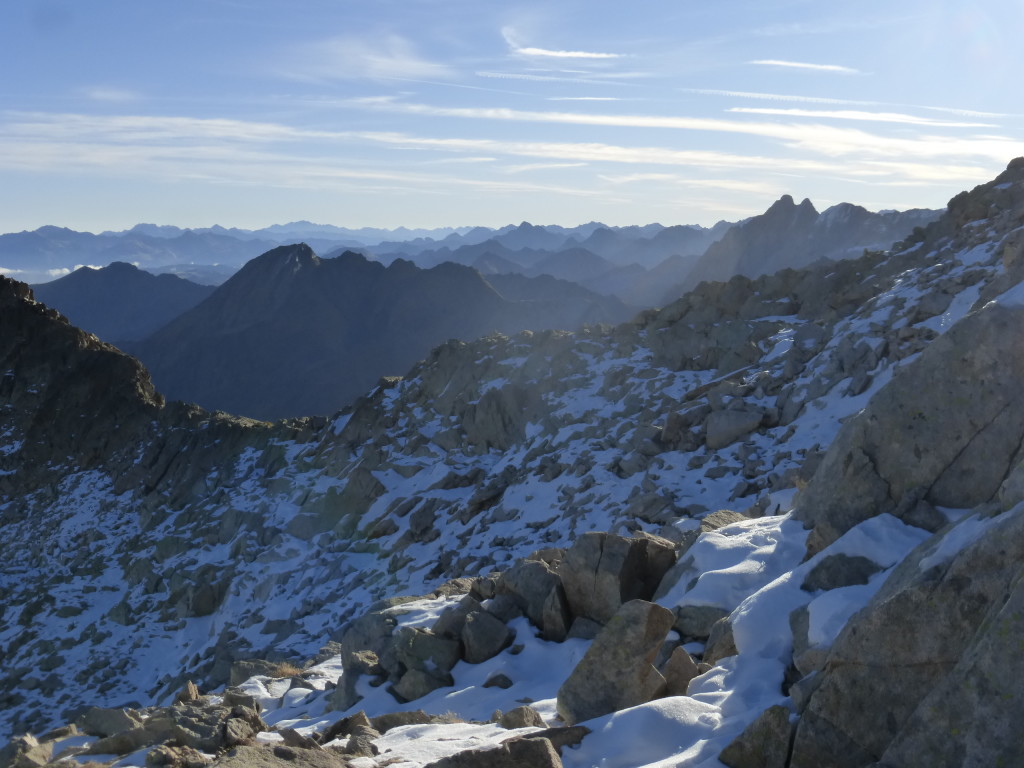 Once crossed you hit the glacier (a small pocket one, with very small crevasses, if they can still be called crevasses). It was the first time for my friends to use crampons and ice axes, so we explained them how to use them and the techniques for self-arresting. The truth is that I knew that even if sometimes it is a bit impressive, there aren’t steep slopes, so I was not worried about that. It took us a while, but finally we were in the glacier, which we had to traverse. The combination of altitude (we were higher than 3000m and had arrived from sea level) and fatigue made it so that we didn’t go very fast. At some point, it becomes a bit steeper and Mélanie was debating whether to stop and wait for us, but after some discussion, analyzing the risks from an objective point of view and showing her that it was not enough steep to slide even if I tried it, she decided to fight against her fears and keep going. We passed through a exposed but not dangerous pass at the top of the glacier, and with the help of Romain, we did it. Awesome Mélanie! 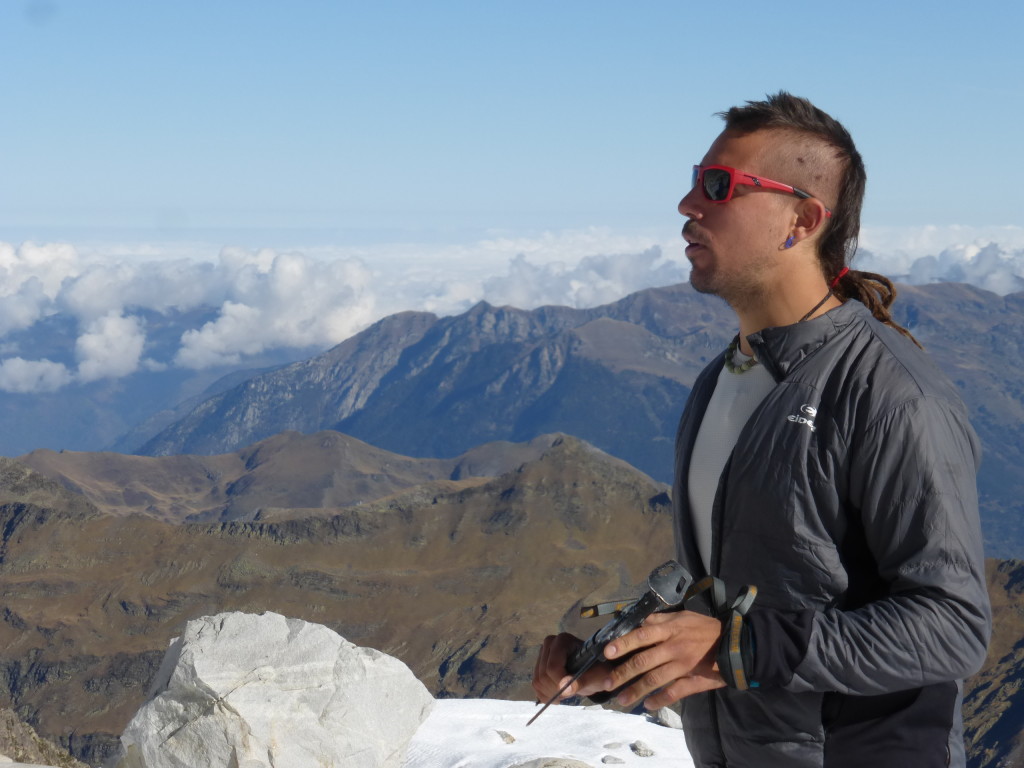 Kike explaining how to use crampons 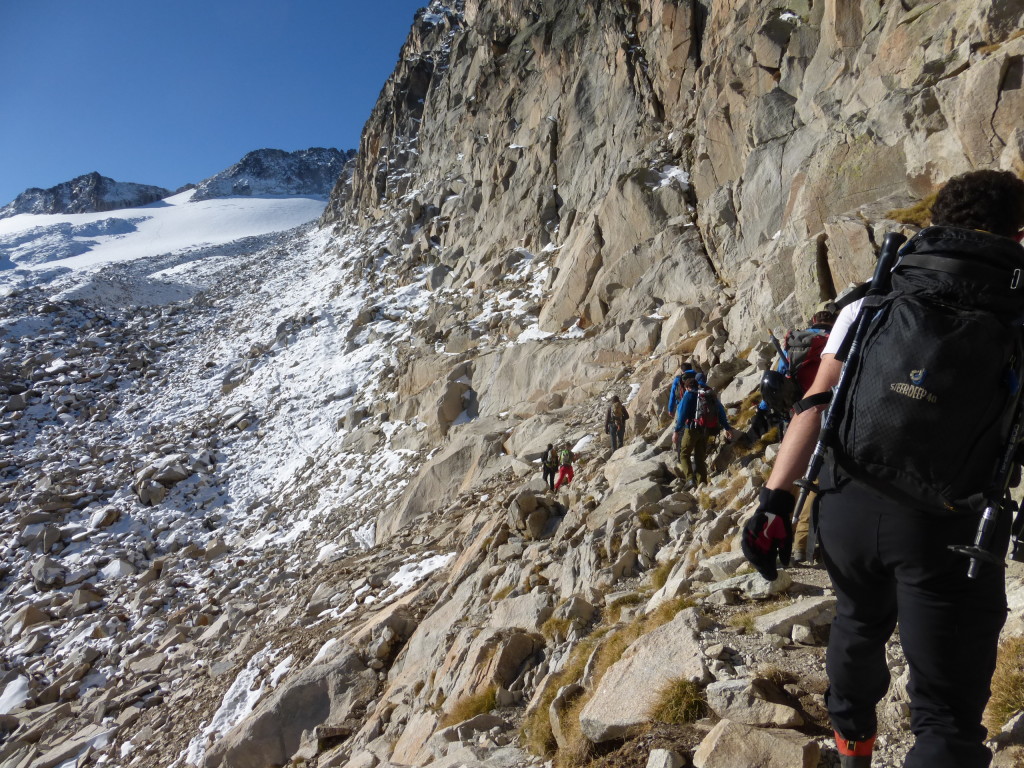 On our way to Aneto´s tiny pocket glacier At this point, we were at the end of the traverse in the Coronas Coll (13.15pm, 3200m). Now, we just have a last slope of 200m. People were starting to be worried about the time and thinking about turning back. But I knew that we were just one hour away from the summit and that apart from doing the last bit of the return trail in the darkness, nothing else will happen (the weather forecast was awesome, and actually there was not even one cloud). NOTE: in case you are thinking about accidents… this is Spain, there is phone network everywhere and the search and rescue folks are friends of mine, so I have their mobile phone number. This is not Canada, risks were controlled.

So we kept going and faced the last slope. It was a bit steep, so I roped up Mélanie to go a bit faster. Thanks Romain for carrying the 20m rope. Oh, I forgot to say that I was unable to carry weight because I fractured a rib the week before. 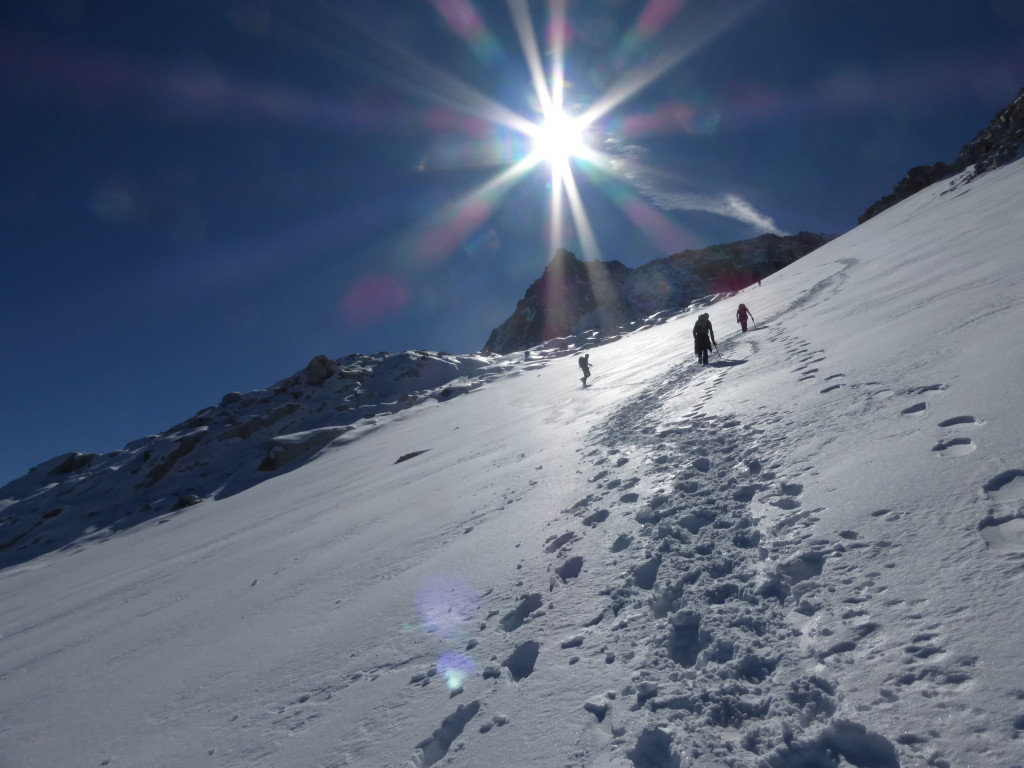 Marching up to the Aneto´s summit

We arrived to the subpeak at 14.15, 3400m. To reach the real summit one has to cross the “Mahoma Pass”. A 20m pass which is quite exposed (don’t fall), but very easy, with good holds for feet and hands. Four of us decided to go for it. I don’t remember how many times I have crossed it, so obviously I was the first one to cross, followed by Sergio, who I was belaying. Pablo and Alberto soloed it, which is actually what is usually done and we made it to the summit (14.30, 3404m). 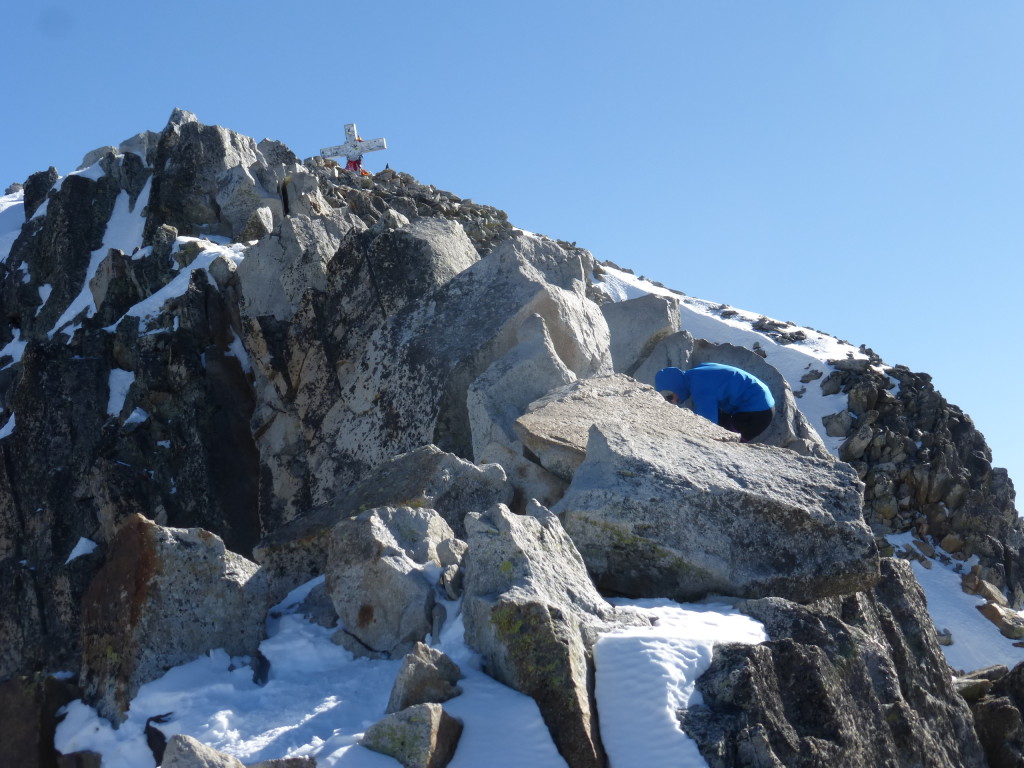 The ridge walk to the summit, easy but exposed 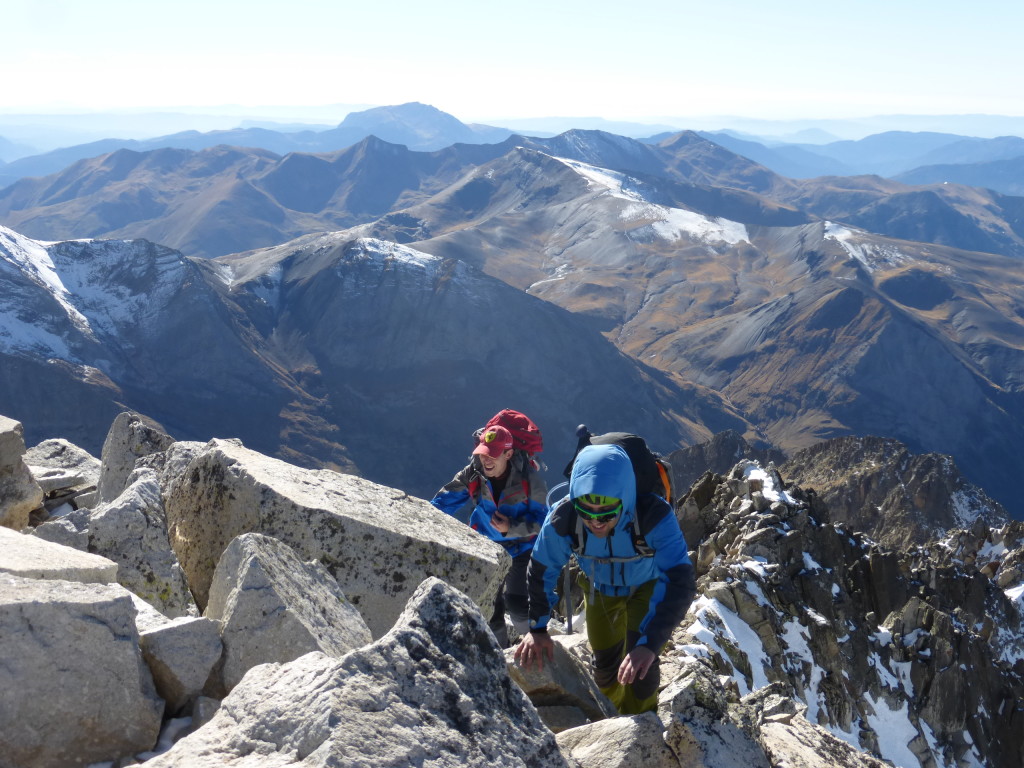 Two others came from another, more sketchy ridge. 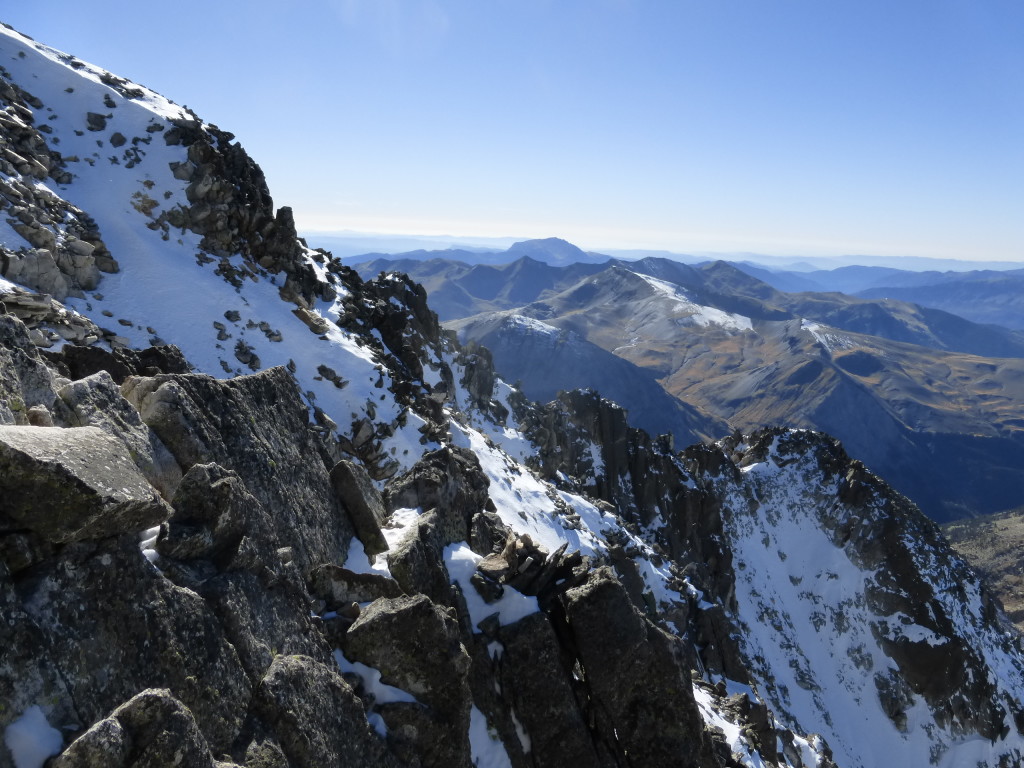 Looking back from the coll

It was windy, cold and late. So we took a couple of photos, and we came back through the Mahoma Pass (14.45). The other 3 had already started to descend, so I went quickly after them in case Mélanie was a bit afraid. But when I arrived, I didn’t believe it. Mélanie was running and bum- sliding  in the same slope that we had roped up in the ascend. Sergio, Xavi, Kike, Alberto on the summit. Note only Alberto wears a helmet (almost nobody does in Spain)

We decided to come back through the “Salterillo lake”.  This way, we did a circular route instead of retracing our steps. We almost didn’t stop on the way back. Just some moments, because some of us were quite tired (especially my friends to say the truth). We all run out of water and none of us had purification tablets. With the amount of human traffic this area sees, we decided not to risk it and didn´t drink from the streams. At 19.30pm, it was dark, but we were just 30min far from the cars, and the trail was in excellent shape. So we arrived to the car almost 13h.15min later, tired but very happy since the day was awesome. Romain faffs out of a crevasse (1 m deep) 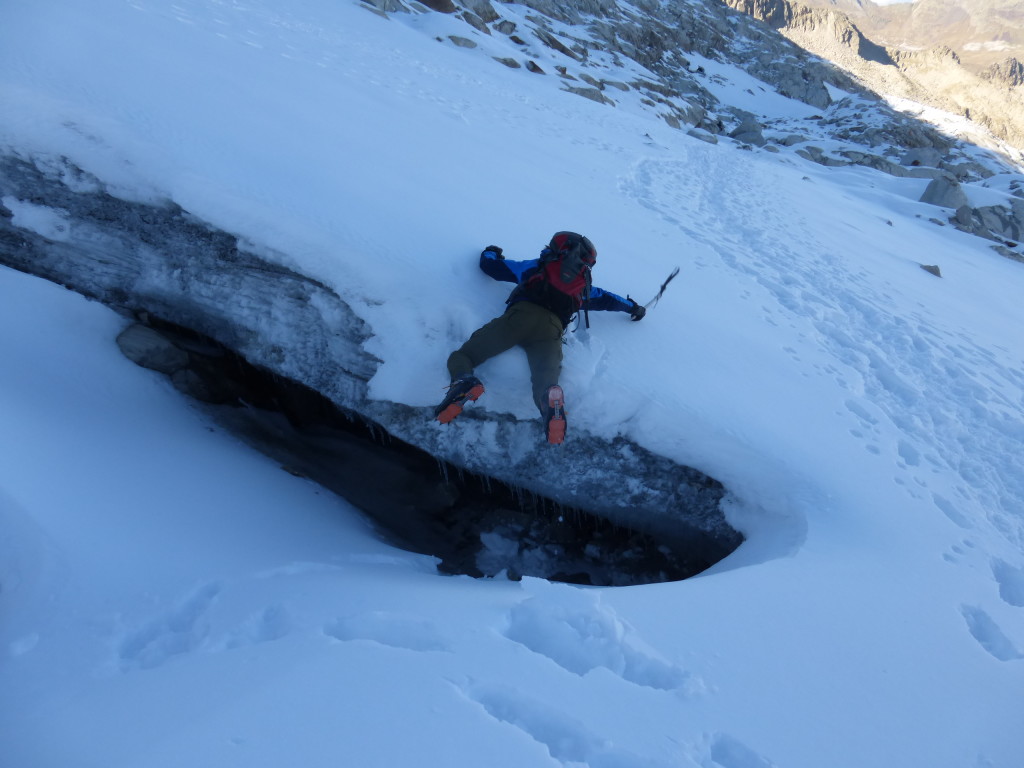 We drove back to the village and cooked a delicious chicken in the oven. Meanwhile, we had some foie made by Romain’s parents, got up to date with the latest trips in BC and in Europe, and enjoyed reading the VOC coffee table book that Alberto brought from Vancouver. It was just incredible, there are no words to describe how good it was.  At the end, we had an excellent dessert: dark chocolate fondue with fruits. Everything accompanied by beers, local wine and pacharan (a Spanish alcoholic drink). Perfect end for a perfect day!

Thanks Alberto for coming and encouraging us to meet and go hiking. Without you this wouldn’t have happened! Thanks also to Mélanie and Romain, their company is superb, also for having always a smile in their faces. Thanks to my friends, because even being tired and out of their comfort space (for some it was their first ever long hike), they never complained at all! We were all grateful to have become good friends through the VOC and hope to keep these meetings happening at least once a year. Next time we´ll climb Aneto with skis.