Almost getting killed by a tree and too much pow

A group of 15 of us parked at the chain up area where a friendly ranger setup a blockade to ensure that vehicles with chains put them on before continuing to the trailhead. As none of us had chains, we all booted up with our skis on our backs until we reached the trailhead. There was a ton of snow and we were able to start skinning right away. I was sweeping the rear to make sure no one got left behind and to help out anyone who may have equipment malfunctions or need help with their pack weight or skinning technique. The snow was heavy and constant and strong gusts of wind cut through the air and abraded my exposed face. The groan of trees filled the air as a really strong gale came by. The groan of one large tree turned into thunderous crackling as it fell towards us. “HEADS!!!” I screamed. The tree’s fall was luckily blockaded by the shorter trees near us and was far enough to not bounce over. But the impact sent a mighty dusting of snow in our direction. “Okay, guys, put on your helmets!” Emily advised, which I’m sure would help for maybe some dead-fall but I don’t think it would save one from an 8 foot long tree trunk falling on the head. 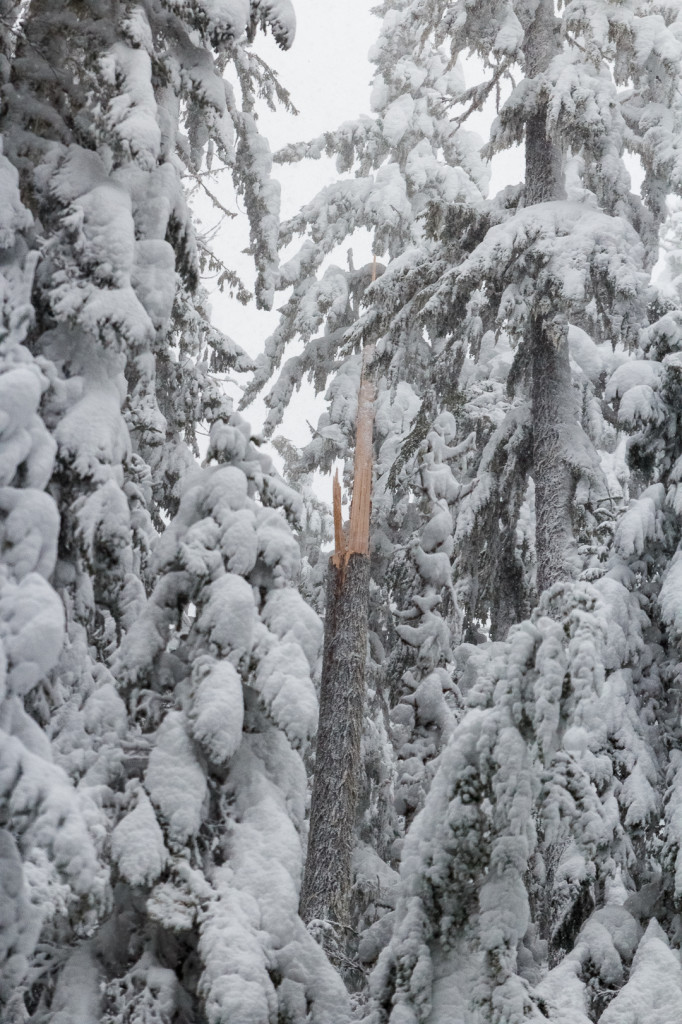 Tree that snapped and could’ve killed us

We made it up to the warming hut without further incident where we shared fruit cake, cookies, and other goodies.

We decided to split up into smaller groups and head up to the junction where the summer route and winter route split off. The orange marking wands weren’t placed yet so we all followed an already set skin track that followed the mountain biking route. One person in my crew of four had a broken frame binding so he was trying to skin up with his heel locked down. Another person didn’t have any avalanche gear. When I pointed out a potential slide area, it was decided that it was best to turn around rather than skirting through it one by one or skinning around it. On note of group decision making, it was decided that if one person of the party is not comfortable with continuing to the objective, they have the ability to exercise a veto. This means the entire party must turn around. This prevents a crew from peer pressuring someone into doing something that they’re not comfortable with doing. It is important to stress that one should not feel bad about making the whole group turn around and that party members should not heckle that person about their decision. That decision could very well save one from getting a lifelong injury or losing their life. Remember, the mountain is always there. Better to be able to ski another day instead of regretting getting injured or losing a friend. All of us skied down back to the hut at varying speeds, some faster than others and some getting a face full of pow from a classic telemark faceplant. I decided to take a crew of the more experienced and fit skiers for another lap but this time up along where I believe to be the winter route based on the many times I’ve come to Red Heather in the past to avoid the avalanche dangers that the mountain biking route presented. Ross graciously took down the group of less experienced backcountry skiers back to the parking lot. The plan was for the fast crew to make a quick lap and catch up with other skiers at the bottom. Luckily I didn’t have to do much trail breaking since there was a nice skin track that was probably set earlier in the day. It was just covered up with the recent storm snow but it wasn’t hard to locate it with a couple probes of my ski pole and it save me much energy as I lead the crew of 7 up to where a view of Atwell should’ve been visible had it not been whiteout conditions. On the way to the viewpoint, I pointed out a nice steep-ish slope to our right. I presented to the group two options: to skin up that slope and do a couple laps on that or to simply continue up to the viewpoint. Since one person was not comfortable with going up that slope but only comfortable with going to the viewpoint, we simply continued on to the viewpoint. I reasoned that there was still good skiing to be had, even from the viewpoint. And good skiing we did have! We enjoyed a ski down in the pow where it was steep enough but stayed close to our skin track to maintain our speed on some sections. We kept as much left as possible and consulted a GPS once to ensure that we made it down to the Red Heather hut. Enough snow had fallen throughout the day that we were able to ski down almost all of the way down back to the chain up area. That day was probably the best day of early season skiing I’ve had in my 2 years of ski touring and I was glad to hear that many new-timers to touring enjoyed this tour last Sunday. 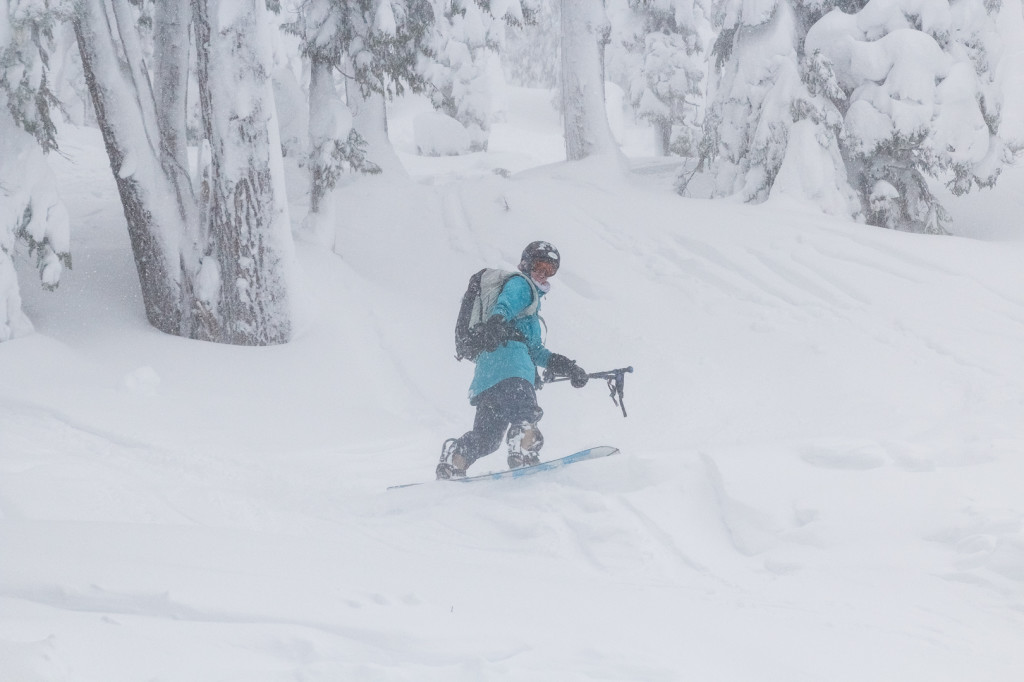 Some sick split boarding by Beth

This entry was posted in Accidents, Ski, Trip Reports. Bookmark the permalink.