This was our third adventure into the Mt (Confidential) area. Thanks to Edward, we now had a GPS track to follow, and the Jeep was keen. Sadly there were no VOC people on the trip besides Carla and myself, but maybe that’s because the trip was mid-week and most VOC people have to work mid-week or else they are off travelling for the summer. We did manage to recruit Diane, a Golden Age Hiker, so we were three.

Our objectives were somewhat unusual. We had heard that there was a cabin up there with an interesting sign on it, beside a nice lake, so we wanted a picture of the cabin and sign. And Edward and crew had skied some mysterious mountain up there, so we thought that if we could follow his GPS track to the mountain, that might be fun.

In Vancouver it was scorching hot, so we did various things to compensate. We froze our water bottles. We prepared iced coffee with ice cubes in it, in a Thermos, for the drive home. We remembered the camera this time. We loaded the GPS with details. The Jeep was keen. We we were wearing cotton. And sun hats. And shorts. And DEET.

The Jeep made it a long way up, but tended to overheat on the steep bits. We knew that if we turned the heater to max and opened all the windows, the radiator would not explode, so we did that. After a while the water bars on the road got annoying so we parked and started walking. By referring to the GPS a lot we were able to avoid most of the numerous side roads and soon we were at the cabin with the lake and the interesting sign. 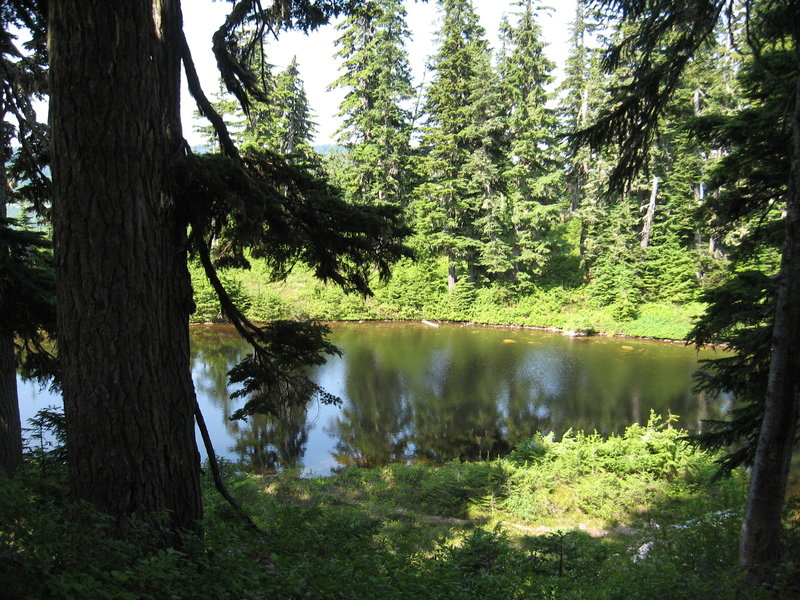 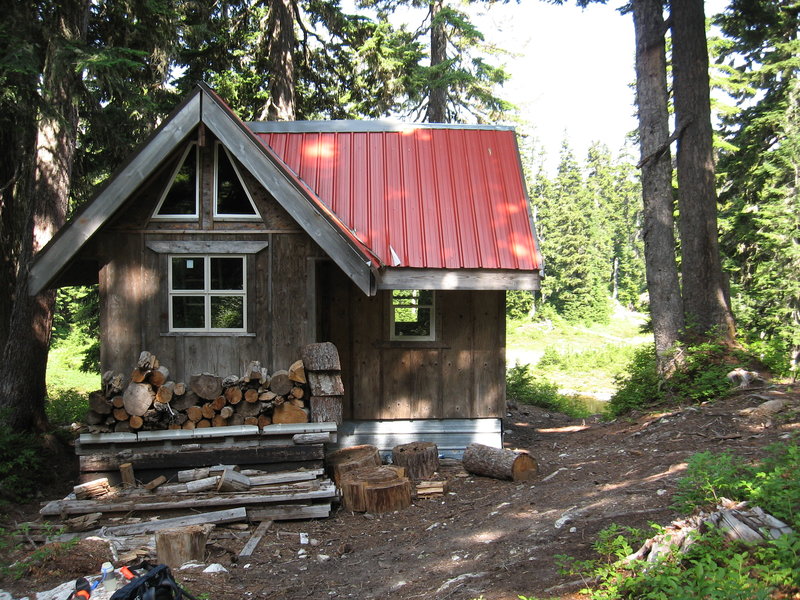 so we explored the cabin. 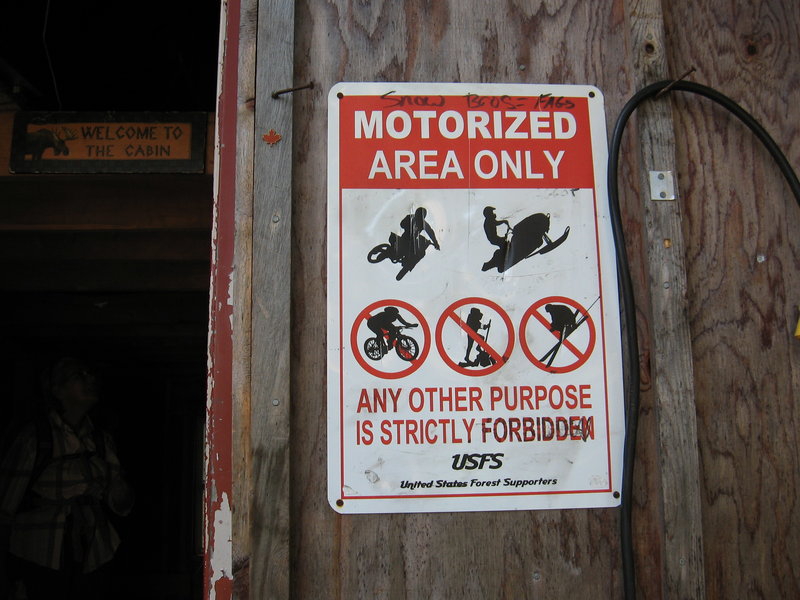 The hut was somewhat different from standard VOC huts. The door is a commercial grade steel door, but it has bullet holes in it, coming from both inside and outside the hut. The bullets were large calibre and surprisingly did not penetrate both layers of door, so the holes in the door did not have an “exit wound”. The Door with the bullet holes

A rather complete set of tools was provided so you could take your snowmobile apart if you felt like it. There was a large wood burning heater, but no insulation in the walls or roof. There was a generator (they need electricity for the stereo).

No solar panel for these folks!

There was no indication that anybody ever slept in the cabin. A couple of dead vehicles up there testified to their former greatness.

As it was not yet noon, we thought we should try and follow Edward’s GPS track to the mysterious mountain. After several wanders into the dense shrubbery we eventually found a route that sort of worked, the shrubbery eventually thinned out, and we got into a snow-filled valley that went in the right direction. We found a bear further up the valley but we ignored each other. The ladies noticed that either we were going to have to do some actual hands-on climbing and they didn’t like that, or walk all the way around to the other side of the mountain. We weren’t sure whether we were climbing Anif, or Mulligan, “maybe we should be climbing that other one”. And we weren’t sure that we wanted to follow our up-route on the way down. And it was getting late. And we were thinking about Lions Gate Bridge traffic. So we told the GPS to take us back to the Jeep.

Back at the Jeep we ate the watermelon, and started the drive back to Vancouver. We had walked 6 km, and including lunches, and messing around at the hut, time Jeep-Jeep was 6 hours.

Do we have to come back and this time actually get to the top? Carla thinks so, but I don’t need it. The scenery was fine. If you feel like not getting to the top, that should be allowed. I would like to come back and paint the door on the hut orange so it matches the doors on our huts. This would make the bullet holes stand out really well.