Two Dudes and a Needle

After trying and failing to write at least five prior TR’s, I’ve finally kicked one out the door. Amazing.

Plan for the long weekend was originally to summit Whitecap, that fell apart when the weather report was briefly really bad and the front wheel fell off my van a week prior. Now I managed to fix the van that week, but thus had four days off work to twiddle my thumbs at the cruel fates.

Thankfully Lukas S. got ahold of me on Friday night to ask if I wanted to go cragging. I did not, I like climbing things with tops that go at below 5.10. Things like Blanchards Needle, which I’ve been wanting to hit up for about six years. So we settled on that, (despite valiant efforts on my part to sell him on Viennese), I finished hammering on my wheel hub with a rusty railroad spike, and we peeled out of Kits just after 6am on Saturday. 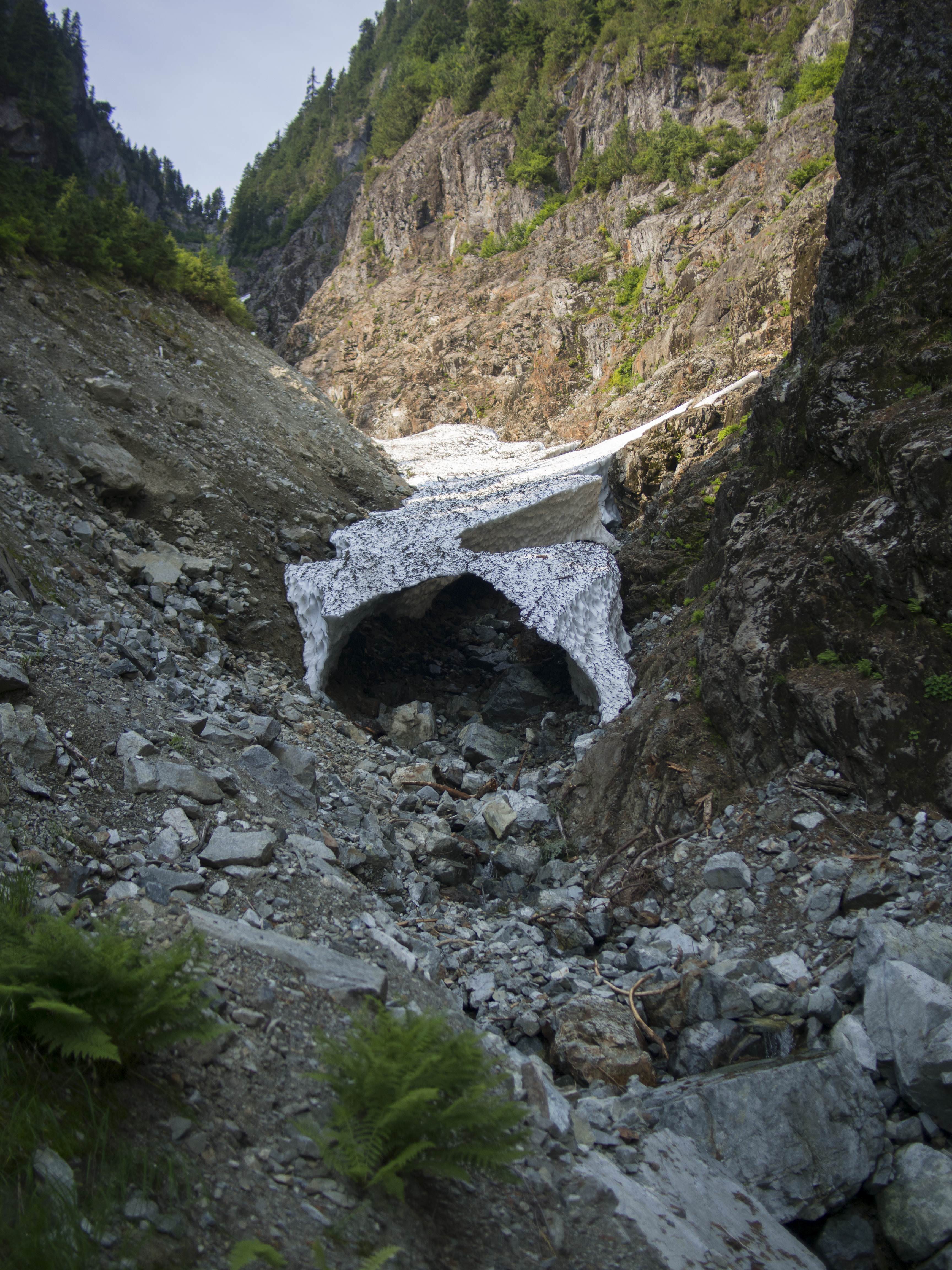 Hitting the trail at 7:45 we approached the Alouette – Blanchard col via Evans Creek and Flys Gully, which I will emphatically state here is not fit for man nor beast, in the mid-gully we found a pile of hollowed-out snow which we bypassed to the left by bushwacking through a wall of soaking wet fern & thorns, but that ended half way up and we returned to the very loose and very steep scree. Effectively slipping upwards on a moving landslide at a hellacious angle, with the constant fear of the sliding debris causing a boulder above to dislodge and kill us. Absolutely do not recommend this route unless early in the season when you can reliably ascend snowpack through it, or if you have a casual disregard for personal safety. 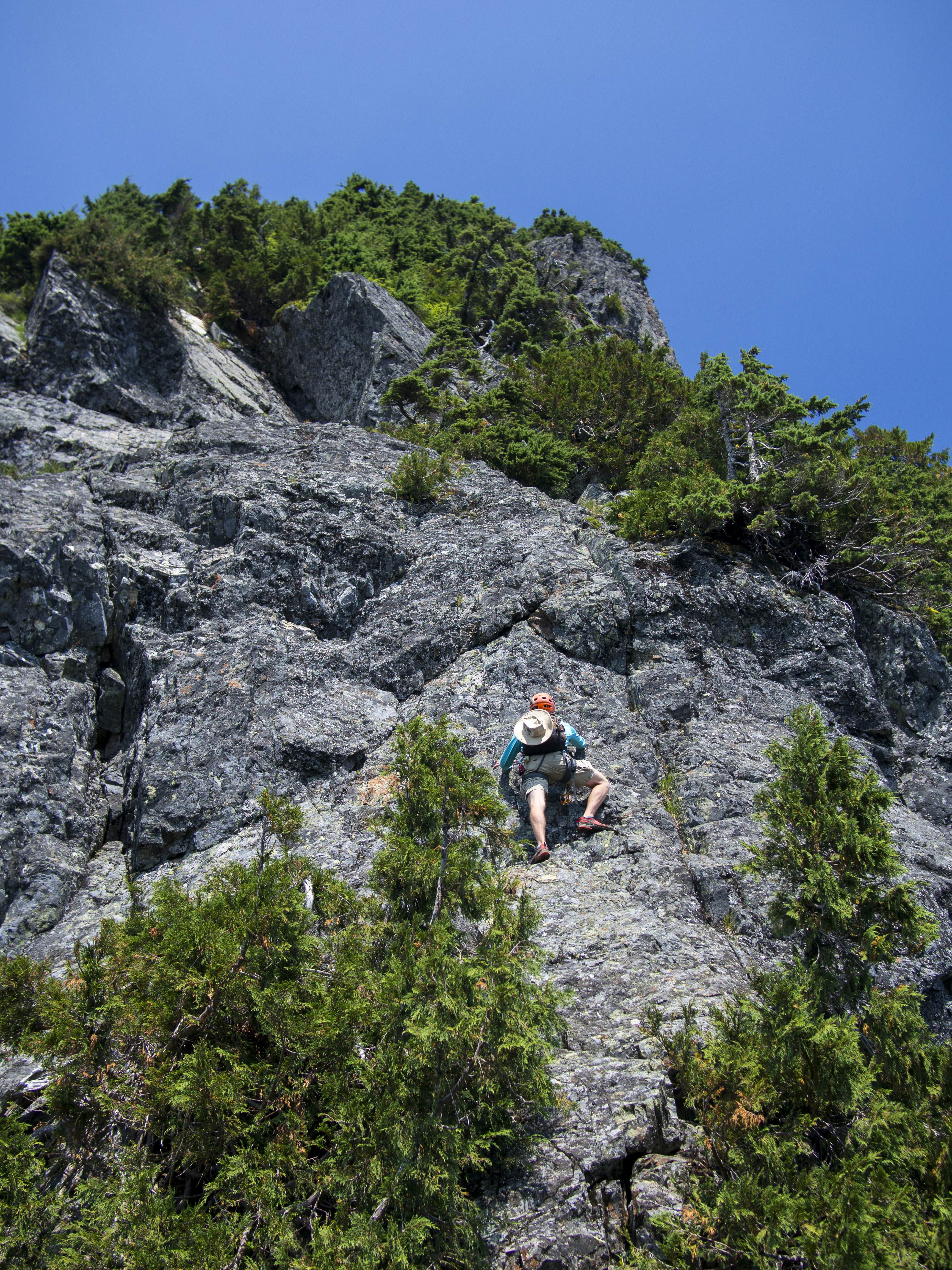 The first couple of pitches on the needle are fun, especially in hikers with a pack on, solid 5.3/5.4 climbing with a few hundred meters of exposure to the right. Definitely bring a rope to rap these first two pitches on the way down (you can save your knees on the hike out with a thin 30m rather than a 60m). Lukas and I chewed through them like the lunch I’d completely neglected to bring, and despite the terrible choss everywhere hauled ass to the subpeak where we stopped for some impromptu twittering like the good millennials we are (sans avocado toast). 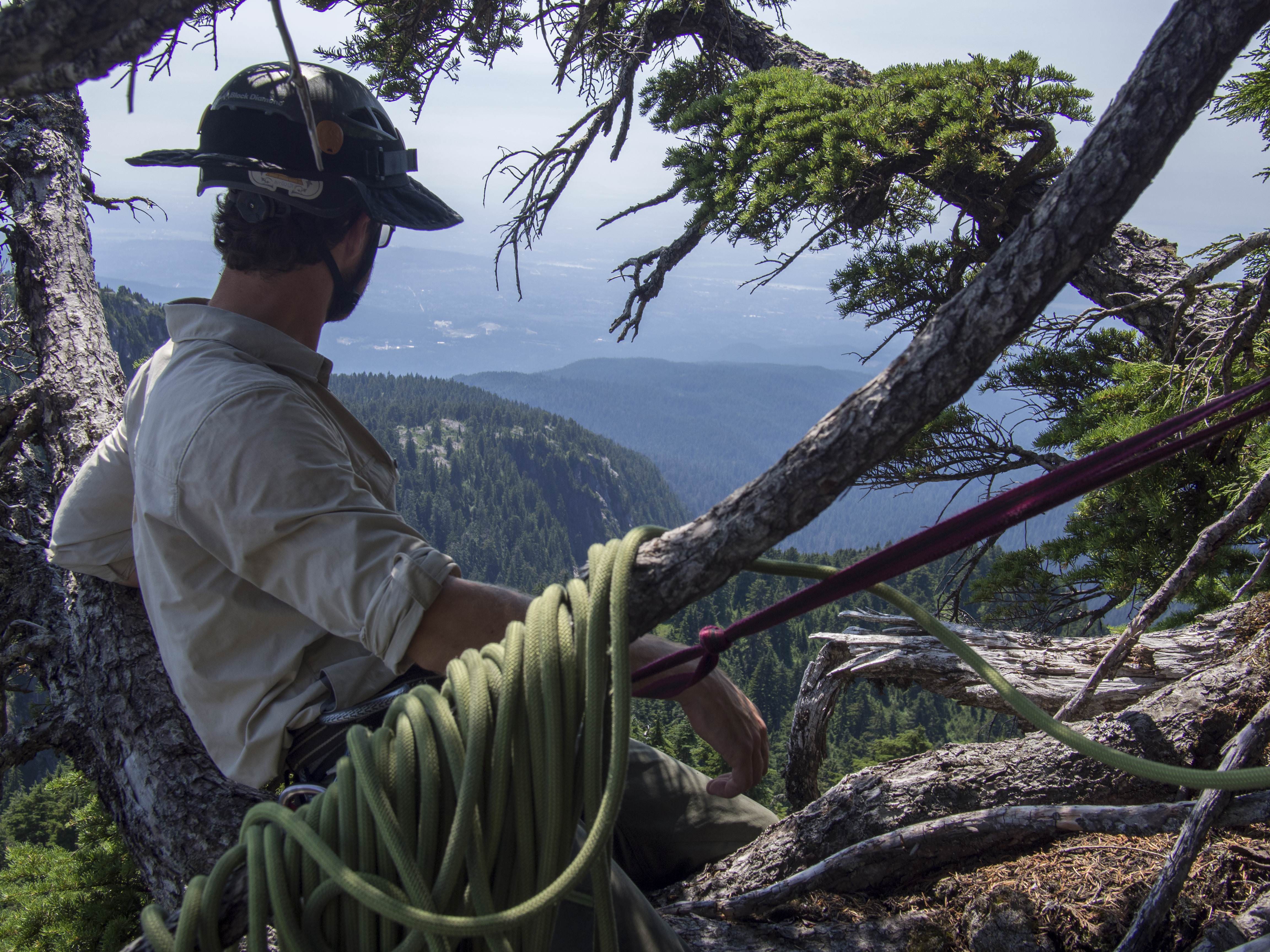 Notch traverse was way less scary than it looks in the pictures, disappointing almost as over the years I’ve only ever seen it done roped up and was expecting a baby au-cheval, and we quickly cruised to the top from there, 5.5 hours from the parking lot. 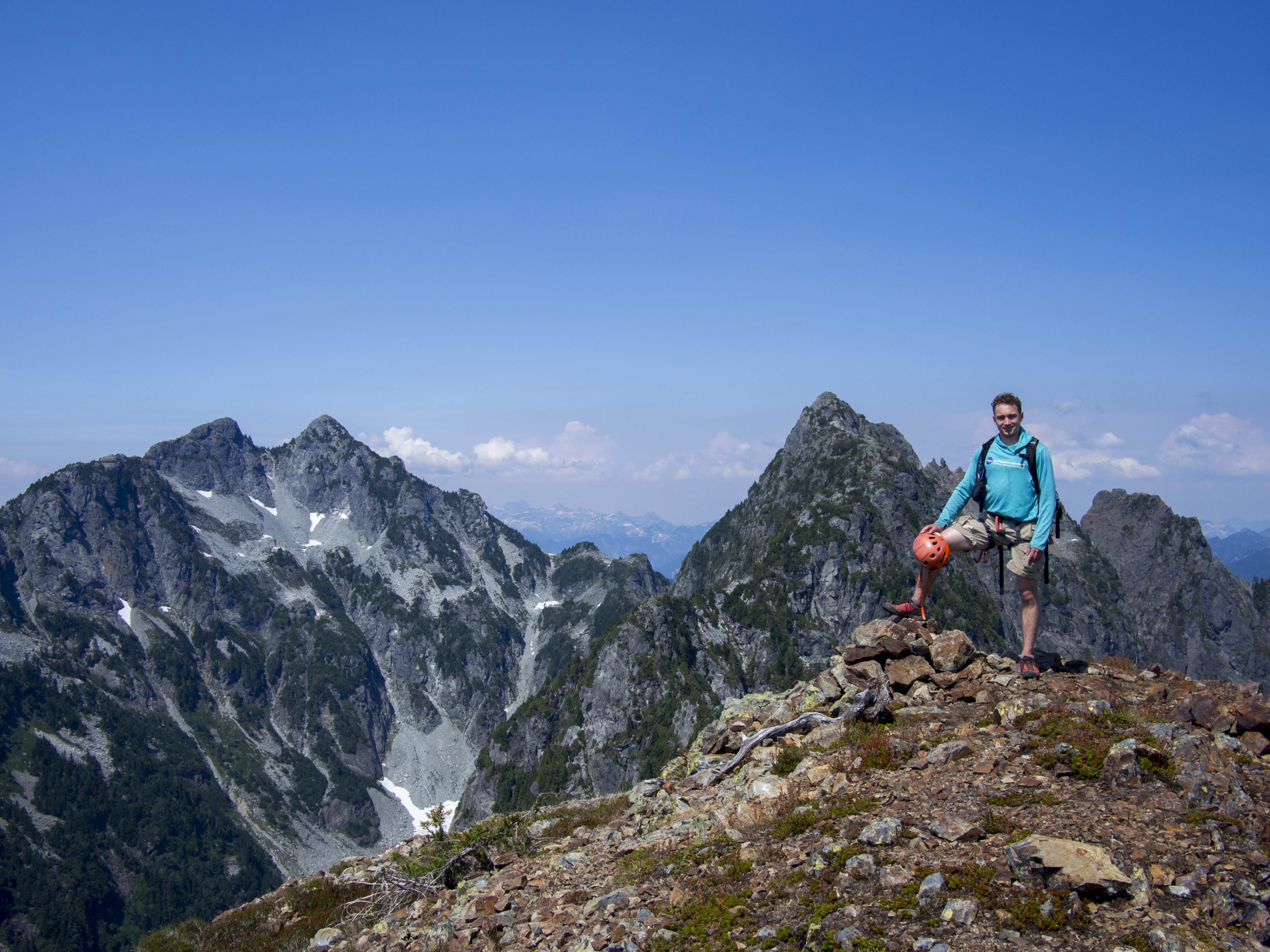 We downclimbed all but the bottom two pitches, and (deciding we really didn’t want to die in a landslide) opted to return via Alouette. This is where we discovered the “trail” between the two peaks has completely grown over aside from some torn flagging tape on the ground in places (Note: I later checked with Alouette Parks and there isn’t actually a trail at all, despite what many GPS tracks claim!), and resulted in a confusing bushwack / scramble up some nice bluffs to the peak. 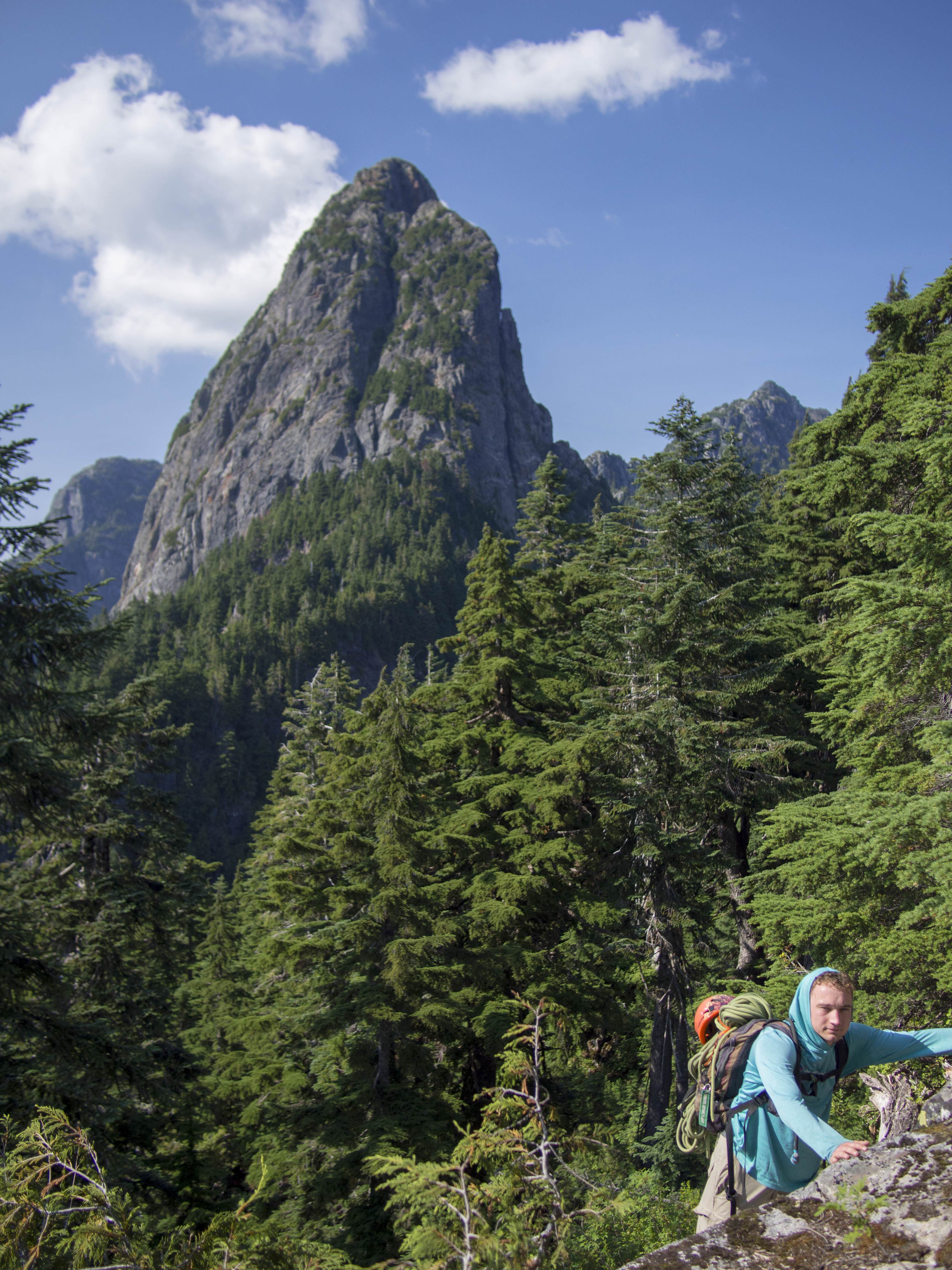 Scrambling the Alouette Bluffs on the way out.

The East Alouette trail was the most singularly depressing grind through grey/brown slash logging that I’ve ever experienced outside the North Shore. I would never hike that trail of its own accord, especially since Alouette is a boring plateau, and as a descent line it was brutal. 2 hours of grinding down a staircase while being assaulted in the eyes by blackflies. Zero water sources from Evans Creek at 7:45am until we hit the west canyon parking lot at the end of the day. Lukas discovered his feet had gone brainy from wet shoes during our morning bushwack, and did over half the descent trail barefoot like a complete boss.

Totaled 12 hours round with a good amount of faffing our way through dense foliage,overall a great day out and glad to finally knock it off the list.

Wouldn’t recommend this as a beginners trip.

2 Responses to Two Dudes and a Needle