Stepchild of Trail: From Trail Beginner to Ultra Winner! 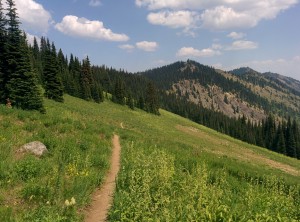 On Saturday morning, two cars headed to Manning Park from Vancouver, carrying Joe O’Brien, Joanna Gower, Amy Prangnell, Ariane Oro, and me (along with my 5 month old pup, Tycho). We managed to snag a first-come, first-serve campsite, despite it being a hot, crowded weekend. By 11:00am, we were launching into our trail running adventures! We all left from the trailhead near Lightning Lake Campground, with planned rendezvous places and times, but allowing everyone to choose their own adventure in order to stay within their comfort zones and hit their personal goals. Most runners churned up some iteration of Skyline Trail. Seeking a little bit more punishment, I tacked on Mount Frosty, ascending Frosty Trail and descending the questionable Windy Joe Trail. Running time on Saturday ranged from three hours at the shortest, to my accidental nine hour epic (thanks largely to a wrong turn followed by ten kilometers of running in the wrong direction). 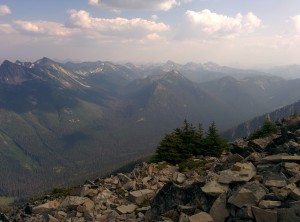 Views from the top of Frosty 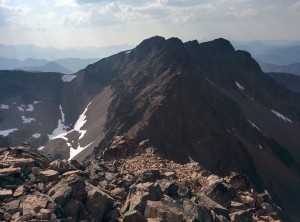 Ridge connecting the lookout to Frosty

That evening, a third car containing Jessica Landing, Ben Clark, and Meryn Corkery arrived, meaning one thing and one thing only: feasting time. Using the VOC barbeques, we cooked up a delicious feast of soy burgers, grilled veggies, an alarming amount of breads, fruits, chips, guacamole, and two different desserts. I say “we”, but really I was still wandering through the woods somewhere near the US border when all this was being cooked. I arrived late enough to enjoy the final product without being of any utility to anyone.

Sunday morning meant round two of running! Despite the heat, we decided to run up Mount Frosty together, a gorgeous and occasionally grueling trail. The trail rises away from Lightning Lakes, forming a series of dusty switchbacks, followed by some sub-alpine flats, and finally ending in a scramble up a loose scree field at 2400 meters. For a snow-free and laughably accessible hike, some of the views at the top are hard to beat. To celebrate a successful trip, we treated ourselves to a meal out at the Manning Resort.

With battered legs and full bellies, most of trail runners headed home, though Jess, Ben, Meryn, and Ariane stayed an extra night to avoid driving exhausted into the evening. While we didn’t quite capture our goal of running a net positive calorie intake, we did get to run some fun trails and feast to our hearts’ content.