Posted on September 19, 2018 by Cassandra Elphinstone

I had never heard of Athelney Pass before Caroline suggested doing a trip there over the Labour Day long weekend. Strangely, I noticed that there were no VOC trip reports from the area so I thought I should write something up. It is a spectacular location!

Athelney Pass is north of Harrison Hut and Pemberton near the Bridge Glacier. You access it by driving towards and then past the Hurley FSR. The road is two wheel drive accessible but, since it is quite remote, make sure your car is in good working condition. 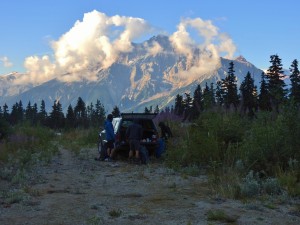 We drove up on the Friday evening. The drive from Vancouver is about five hours to reach the trailhead so it is more of a long weekend destination. The group consisted of Tom Curran, Caroline Jung, Anne Vialettes and myself. After some faff the next morning, we began hiking around 8am. We were trying to start fairly early because we had heard rumours that the trail felt longer than its 15km and 800m elevation gain would imply. The trail begins by going downhill through beautiful old growth forest. We followed flagging that marked trees for logging and, for a short time, we debated whether or not we were headed the correct way. Before long though, we came out in a river valley. Much of the trail follows along this river up into the pass. The trail heads into the forest whenever the river meanders too close to the forest to allow hikers to pass without wet feet. 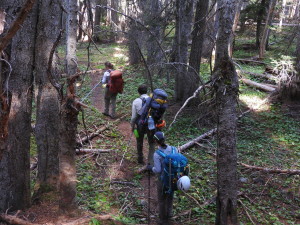 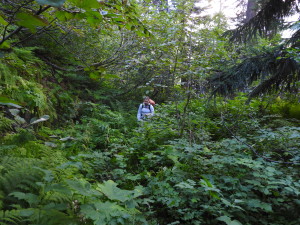 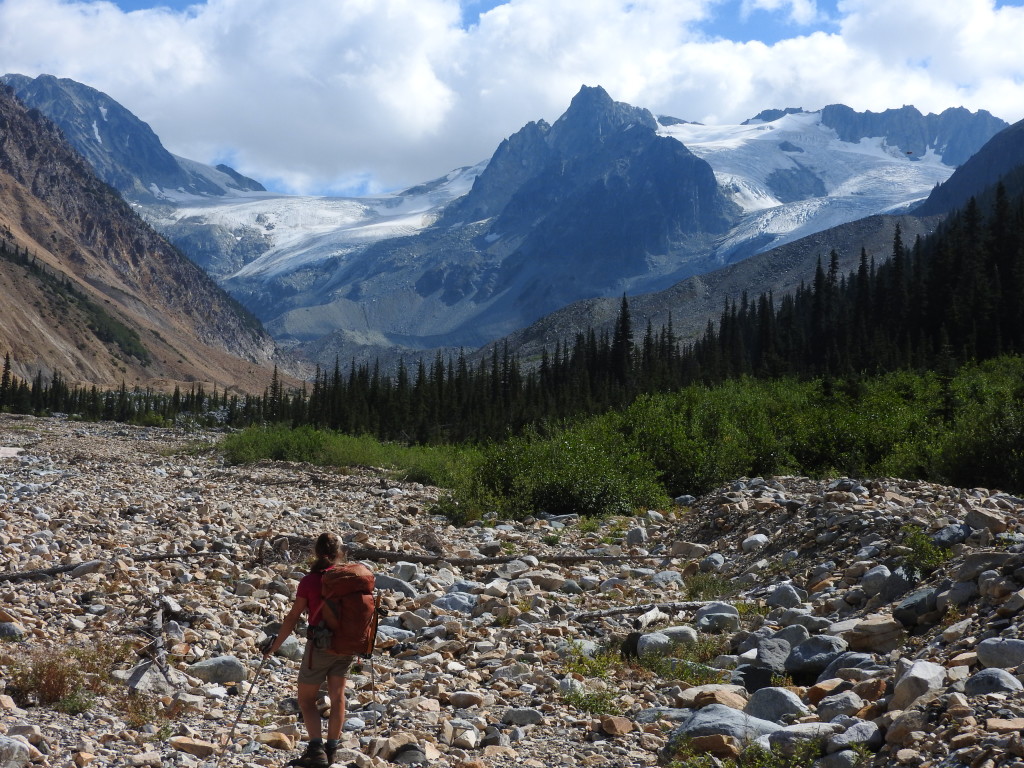 After a few hours of hiking, we found ourselves slightly confused as to where the trail went and decided to head up the hill into the old growth – on the way back we realized that the trail itself seems to stick close to the river all the way. We met some Devil’s Club and I fell off a log before we finally headed back down onto the trail again. Eventually, after a bit more hiking, we found ourselves looking up the pass towards the glaciers ahead. After following a moraine up the valley, the terrain opened up into a beautiful U-shaped valley surrounded by glaciers and sharp jagged peaks. The landscape reminded me of the Rocky Mountains. Many of the plant genus/species I recognized from the Canadian High Arctic: Silene, Epilobium, Salix, Cassiope, Saxifraga, Luzula, Carex, Oxyria etc. 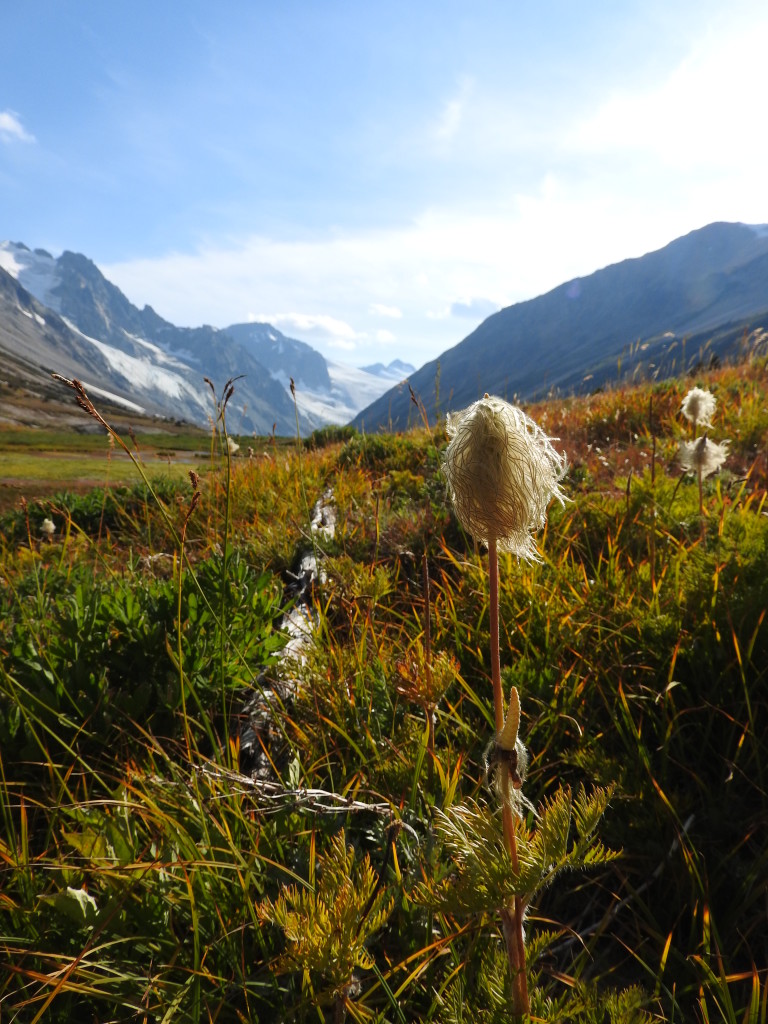 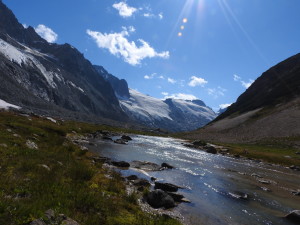 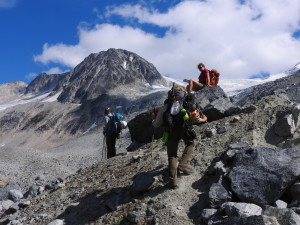 Hiking up through sedge meadows, we made it to an old abandoned mining cabin. After a quick snack, we decided to look for a camping spot as it was almost 5pm. We selected a spot a bit further along the pass near a lake. This would allow us to attempt Icemaker, Guthrum and Ochre over the next two days. After dinner we hung our bear cache. 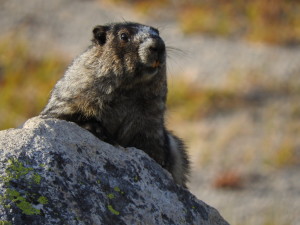 At 4am the next morning, we were up for an alpine start but due to faff it was not until 6am that we left camp. We headed up the glacier towards the col between Guthrum and Icemaker. The bottom of the glacier was blue ice and we headed up unroped, confident we could see any crevasses that might pose a risk to us. Before long though, we hit the snowline and found it necessary to rope up. The glacier was beautiful, with deep crevasses and it provided great views of the surrounding peaks. We found a way through the maze of crevasses but only with some trial and error. As we got higher, the col became enveloped in cloud. We decided to go to the col and, during lunch, wait to see what the weather did. We waited in vain for the weather to clear but as the summit of Icemaker did not look so far off, we began the easy scramble up the ridgeline. As we climbed, it began to snow. On the sub-summit about 100m below the real summit, we stopped, regrouped and decided going any further was not worth it. The weather was getting worse, and we would not get any views. Heading back down the glacier, we navigated our way back through the maze of crevasses, jumping across a couple. Back at camp, it was raining and so, after a wet dinner, we went to bed early. 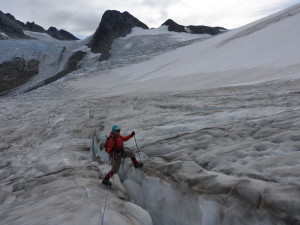 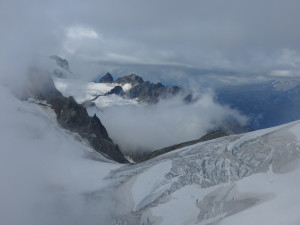 The next morning was sunny. Tom and I said bye to Anne and Caroline who were heading back to civilization. After a quick swim in the lake by our camp, we took a nap in the sun and then decided that, while we were there, we should try another peak.At 2pm, we set out for Ochre on the opposite side of the valley from Icemaker. 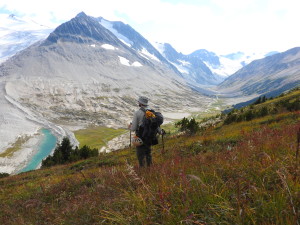 We quickly gained the ridge and hiked up the scree to the summit. From the top, the views were spectacular. After a snack on the summit and some debate about whether or not we could see Mount Waddington, we headed back down towards camp. The rocks were just the right size that we could rock glissade down from the summit of Ochre (be careful of cliffs if you try this). We thought about going up the Elephant, which looked to be an easy hike up the back, but decided it was getting dark. After a nice dinner and spectacular stars, we went to bed. The next morning, after packing up camp, we went for a quick swim and said bye to the pass. It is a truly beautiful and peaceful location. On the hike out, we saw at least five marmots and heard lots of pikas. The hike out took almost as long as the hike in, arriving back to the car at 7pm. After a quick dinner in Pemberton, we car camped in the Wedgemont Lake parking before driving back to Vancouver in the morning. At 5am the next morning, we set off and managed to miss the morning rush hour traffic into Vancouver. Athelney Pass is a great location for people interested in backpacking, scrambling, glacier travel, and/or more serious mountaineering. The pass itself is beautiful and has scenery that is a bit different from many other parts of the coastal mountains that I have visited. The hike in is fairly long and requires some route finding/bushwacking although for the most part, the trail is quite well marked. I would highly recommend visiting Athelney Pass!

This entry was posted in Hike, Trip Reports and tagged 2wd, Glacier. Bookmark the permalink.