Originally we were going to go brush out some of the Lizzie Creek Road but then we changed plans last minute and instead decided to explore the Battleship Lakes area. We were particularly curious about the skiing potential around the area. We started out from Vancouver about 6:00am and started up the trail about 10:00am-ish. 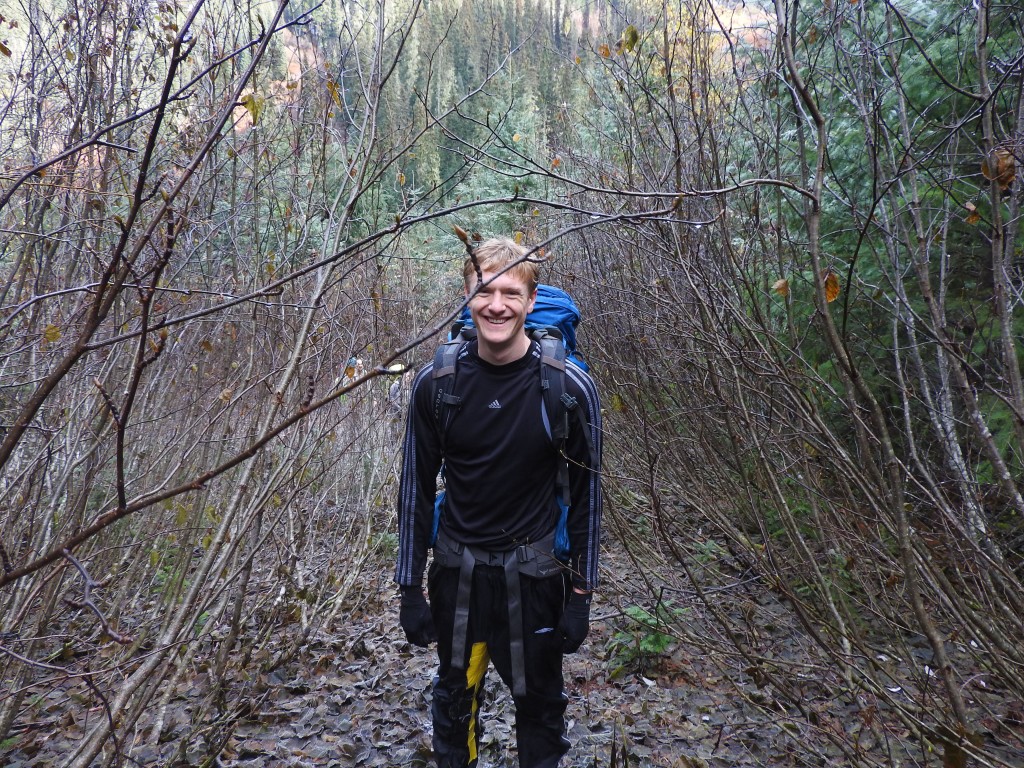 The Phacelia Creek Road was a bit brushy.

It was about 1.2km up the bushy road from the car to the talus slope. You go past the switchbacks for about 200-300m and then look for a number of strands of pink flagging on both a deciduous tree and a spruce in a small opening on the road below a talus slope. This is slope we should have gone up but didn’t because we didn’t know it was there – we came back down this slope at the end of our trip. 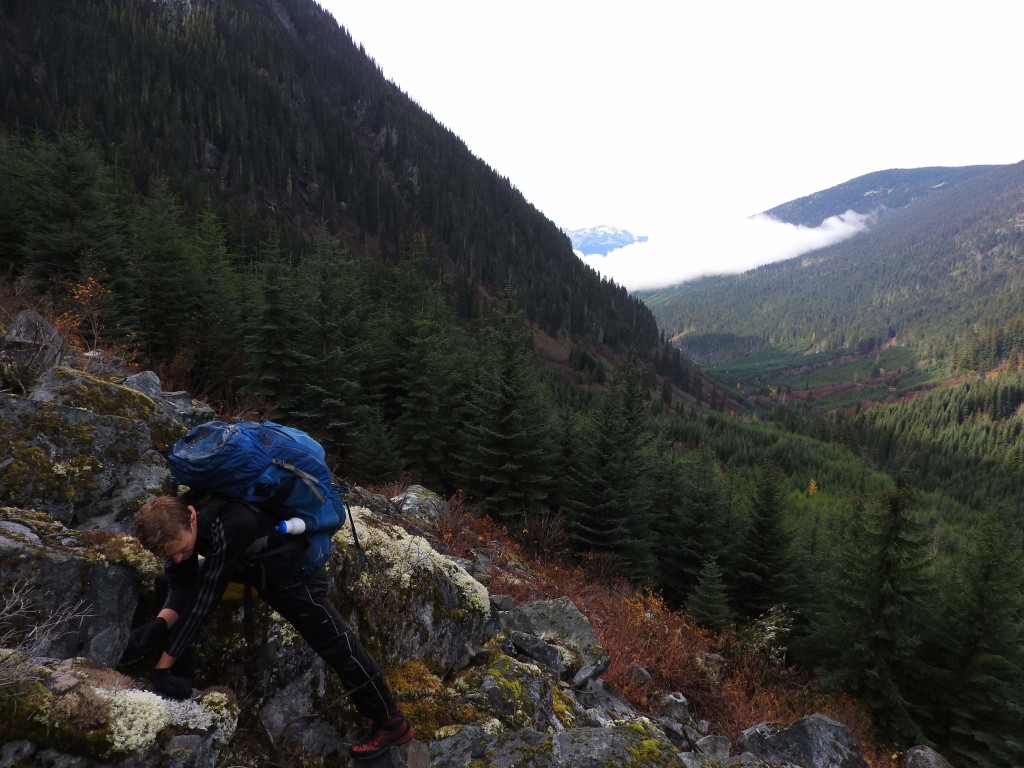 The talus slope was filled with large lichen growth. Some spieces of which, I had never seen before. This particular slope we went up wasn’t the same one we came down (the better one) and was filled with Devil’s Club but had more beautiful lichen. The trail above the talus slope through the old growth forest.

There were lots of trees down and every so often we would come across signs of an old trail route trampled in the ground. Eventually we noticed a rough route was flagged. Not much of a trail had developed and the flagging was sparse which made it slightly difficult to follow. We wondered who had left the flagging. We didn’t have answers. 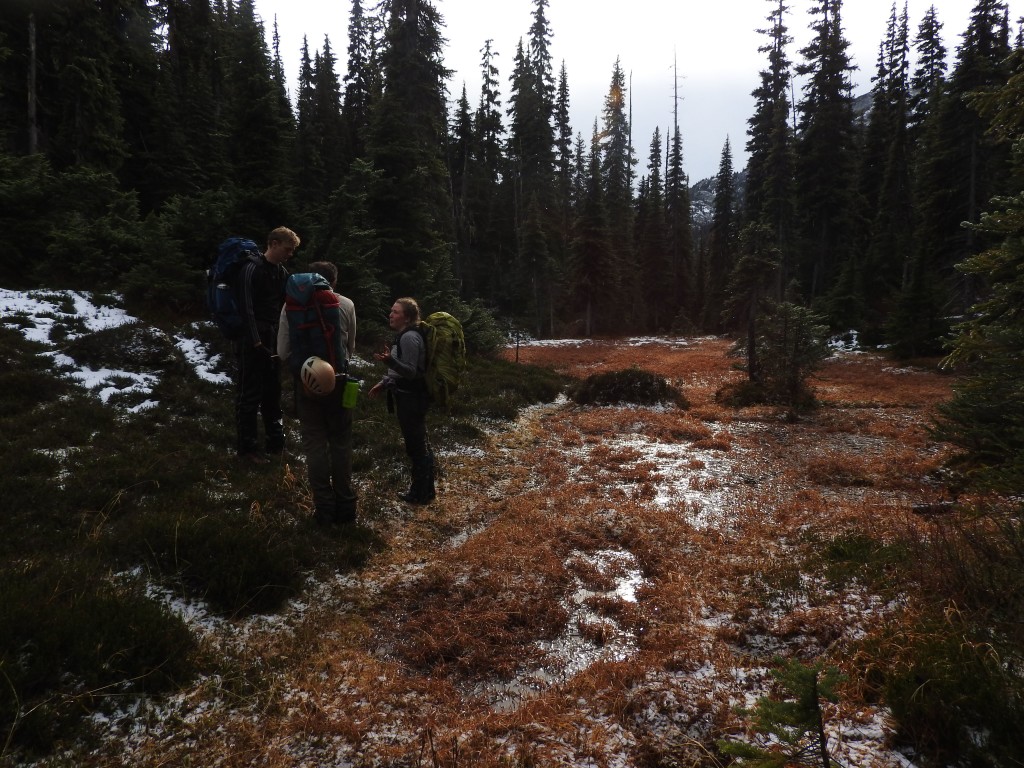 Meadows at the top of the old growth forest. 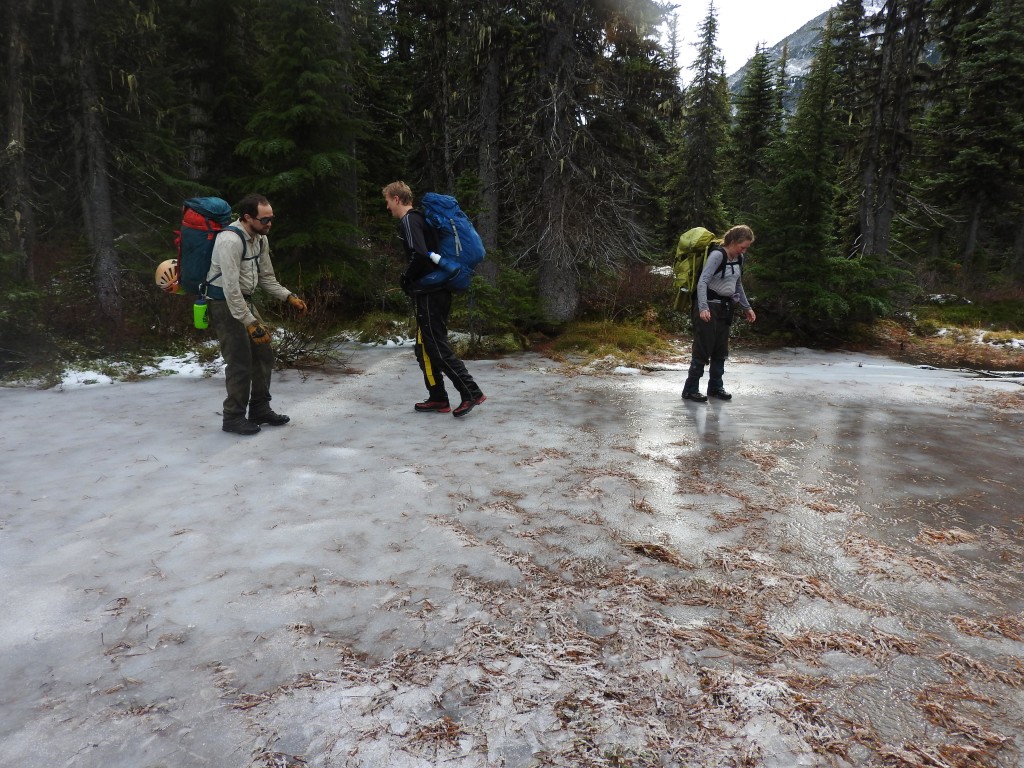 We had fun sliding around on the ice.

The talus stretched from the start of the lakes all the way to the end of the last lake which made travel a bit slow. We imagined that if some work was done to build a proper trail through the forest on the other side of the lake that it would make our travel time past the lake twice or even three times as fast. 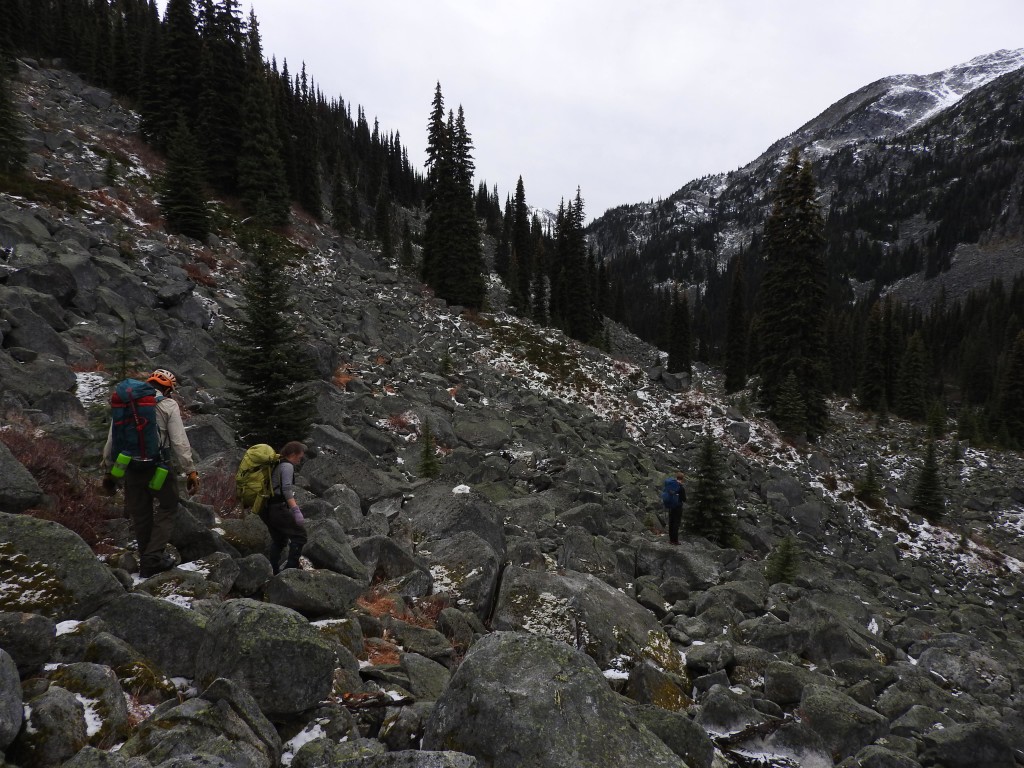 Large talus slopes on the east side of Battleship Lakes. 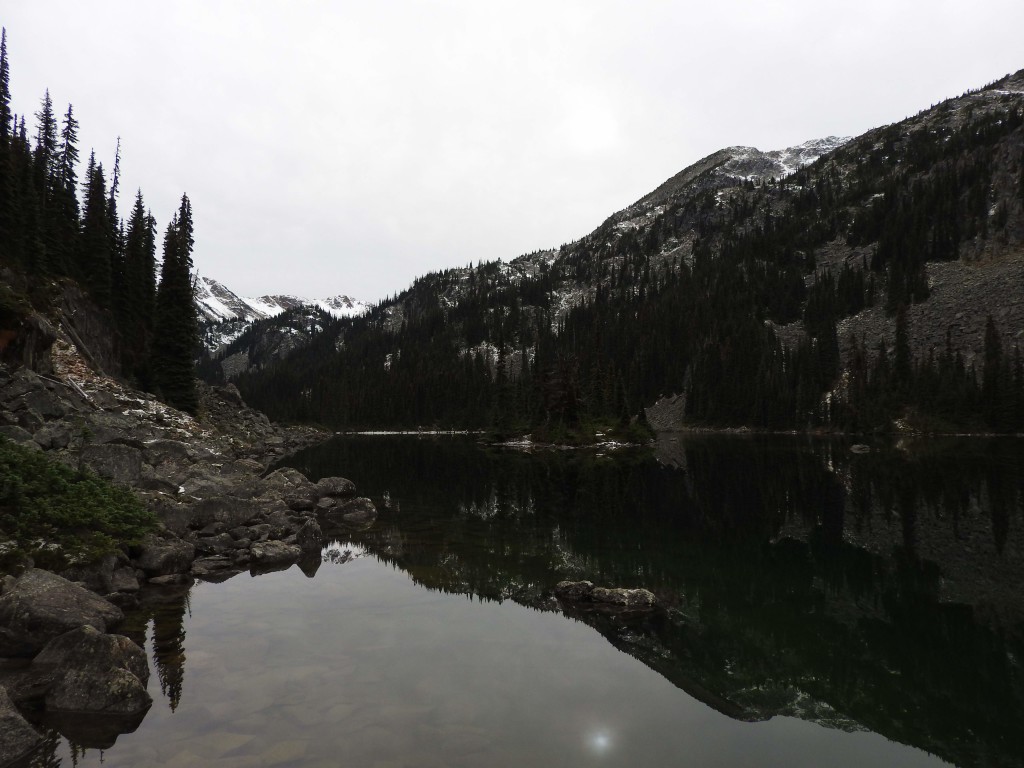 The name “Battleship” Lakes supposedly comes from the island in the center of the second lake, in that the shape of the island with the trees make it look like a moored battleship.

Our tent site was at the south end of the second lake in a small open meadow of heather. There weren’t really tent spots so we placed our tents as reasonable flat as we could over the bushy bumpy heather, in the end it wasn’t so bad. It took us about 4 hours to get to the tent site, but this included some time searching for a way to get off the logging road, a long lunch, and playing around on some shallow ponds that you could skate on having frozen through. 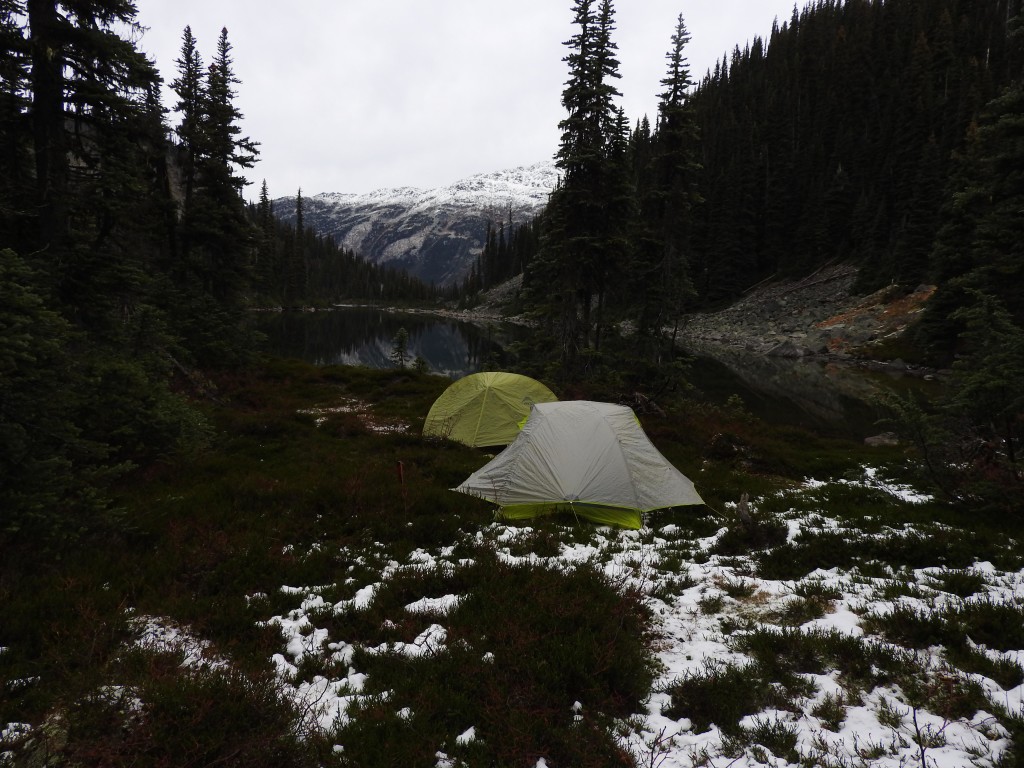 We hiked up a little farther to the bowl below Bella Vista ridge to take a look at potential skiing opportunities. We would have liked to have gotten up farther but it was getting late and we wanted to be back at camp before total darkness. 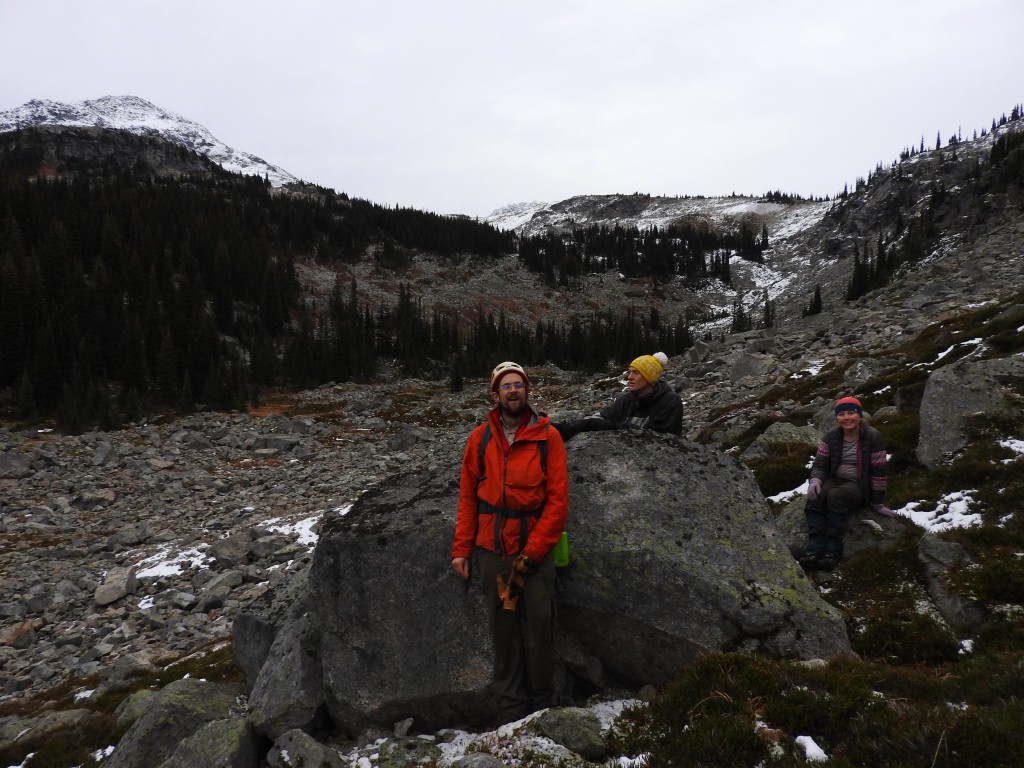 Tom, George and Erica contemplating how to measure 9 marbles while feasting our eyes on Bella Vista Bowl.

It was forecasted to snow, but we didn’t quite realize exactly how deep and how fluffy the snow would get. We were quite happy to be above the freezing level so we could eat breakfast in the cold, dry snow rather than the cold, wet rain that our car back at 1100m certainly experienced.

We would have liked to explore more, but without snowshoes or any trails to follow it would have been pretty slow going and so we elected to head back down. The talus slope beside the lakes took about 1.5 hours of continuous effort to pass through. It wasn’t too hard, but just slow. We almost wished that the temperature would have plunged to -40 so that we could just walk across the frozen lakes. It was very pretty and kind of surreal just how different everything was only 12 hours earlier. This is our tent site the next morning. We fell asleep in fall and woke
25cm deep into winter.

The hike down from the lakes was a bit interesting for the first part because the snow level was as low as 1450m making everything very slippery and the trail we followed up invisible. The flagging was sparse so we ended up pulling out our GPS to direct us back along the route we came up. The trail traversed down across small ravine-y creeks before reaching the main ridge that descended to the road. Once on the ridge the flagging was easier to follow. We followed it all the way to the talus slope that I mentioned way back at the start of the trip report. It took us 4 hours to reach the car from our tent site, with less faffing then going up. The extra time probably could be attributed to the snowy talus slope.

Overall, the area looks like it could have some fantastic skiing. It is far however. The Phacelia Creek Road is not plowed in the winter and so if there is snow all the way to the In-shuck-ch, it would be a 10km skin on the road, and then another 5km to the alpine (the end of our route, not where we camped). However, if you can drive all the way up to the Phacelia Parking Lot, then you can shorten that skin by 5km. If the effort was put in to build a proper trail up to the lakes you could have a really fast ascent into the backcountry (2-3 hours from the road) and access to loads of great non-motorized ski terrain.

PJs are the bomb, Instagram is a waste of time. Snow all winter, Water all summer. Huts Coordinator from 2016 to 2018.
View all posts by George Hill →
This entry was posted in Trip Reports. Bookmark the permalink.