On the 27th of October, we headed out to Garibaldi Park to make the most of what was supposedly the last day of good weather for the next few months. 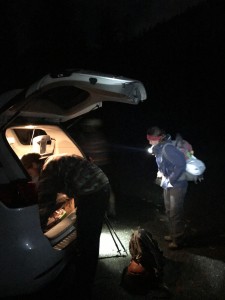 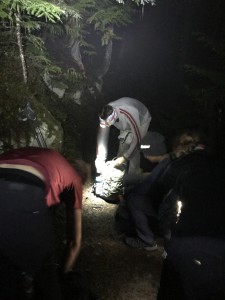 Armed with a variety of headlamps/torchlights, we started heading upwards on a set of switchbacks from the parking lot at Rubble Creek towards Black Tusk. 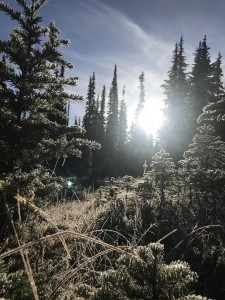 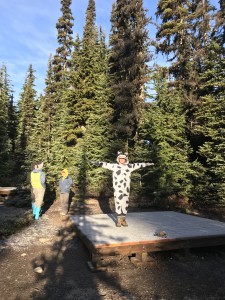 After a few hours, we arrived at the Taylor Meadows Campground. The meadows were stunningly beautiful as the morning sun beamed through the frost covered pine needles. A group of us stopped at the one of the day cabins as we waited for the arrival of members coming from the second car.  Shout-out to Leon who shared with us some amazing chocolate muffins. Members from the second car soon arrived and we continued with our trek. 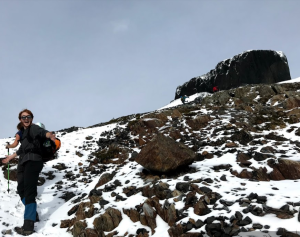 The landscape began to open up at this point and in sight was Blacktusk that sat atop a scree slope, looking down onto our approach from above. The next portion of our trek saw lots of slush and subsequently snow. In equal numbers were the ooooohs , aaaahhhs and woooows in response to the beautiful alpine environment that unfurled before our eyes.

In no time at all, we arrived at the base of the chimney leading up to the false summit of Black Tusk. We assessed the conditions of the scramble and a group of us made the decision to go ahead with it, putting our faith in some pretty questionable foot and hand holds that were covered in ice and snow. After squeezing our way up through this claustrophobia-inducing segment of the scramble for a good 15-20 minutes, the rest of the trail tapered off and we made our way to the tip of the false summit through a much mellower snow-covered scree slope. 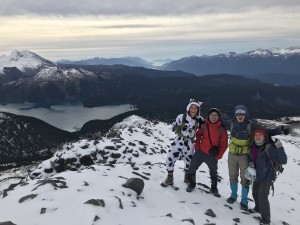 The views at the top, like the summit we stood on, were absolutely unreal. No cats and fiddles were found, but the cow we met on the way up that we affectionally came to know as Branden was evidently over the moon. Kudos to the team for ushering what I’m sure was the first cow up Black Tusk. Amidst the joy and wonderment of reaching the top was a nagging worry amongst our party of the trip back down the icy chimney we came up from. Alas, the trip back down felt easier and safer (to most of us) and we were out in no time. 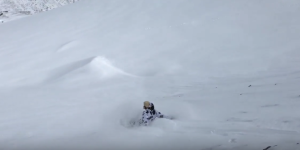 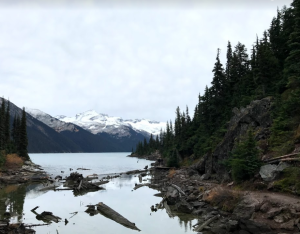 Following this, some of us went over to a snow-covered slope about 150-200 meters away from the chimney to carve out a few runs with our backcountry-buttsliding setup made from a salvaged garbage bag. After this, we headed back to the parking lot, passing by the Garibaldi Lake Campground along the way.

We ended the trip with a hearty and scrumptious dinner at Howe Sound Brewing in Squamish.

What a wonderful trip it was that had everything- a trek, a swim, a scramble, some buttsliding, a wild goose chase and even a 911 call! I think we all did the last day of good weather the justice it deserved.

*Credits to Brendan, Francesco, Leon and Daniel for the photos used in the trip report*

This entry was posted in Trip Reports and tagged Black Tusk, scramble, Trek. Bookmark the permalink.