Son of caves; The clan of the Caves

Posted on November 6, 2018 by Jasmin Tordenro

At 5 am the car was waiting outside full of likeminded cavers ready for adventure.
The drive to Horseshoe bay was through the silence and dark city, Vancouver, where only the shadows, of a people once known as homosapiens, crawled around. Our driver Jeff was swift and got us to safety onboard the ferry.

On the ferry we meet the other cavers, and with one look and a nod, we laid down to sleep. At about 7 am the window master made way for light to shine in, indicating that it was time to get up.
Happy and excited as we all were, we went to the car with the agreement to meet at the food stock to load up and regroup.
We quickly decided that one food stock wasn’t good enough and decided to regroup at another one, where the local brew master made sweet Mjød.

Some hours later we arrived at our camping spot. A big open area with a lot of gravel, so we had to fight a bit with the tent pegs, but It was perfect as it was close to the caves and had space for all of us (15 + warriors!!!)
We quickly sat up out tents and started the caving ritual.

All the minor cavers took on their caving gear, which consisted of overalls and rain jacket decorated with a piece of harness and other young cavers was a bit more daring and choose to put on a onesie.

The two elders took on their colorful cave gear, indicating their status and experience. 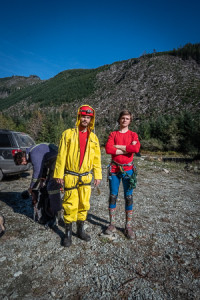 The chief of the flock, Nick Hindley with his warriors, Alex, Ryan and John, was collecting all gear in for the cave sacrifice.
Everything went well, and the cave gods approved. We were ready to go!
The approach to the cave was good and the track was somehow visible, and we arrived at the big sinkhole – A typical entrance to the caves.

We got two ropes up and started repelling down the sinkhole. 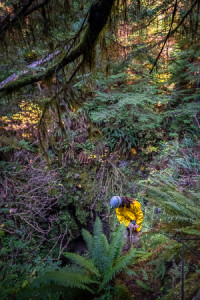 So the cave clan gatheres up one last time before going on adventure: 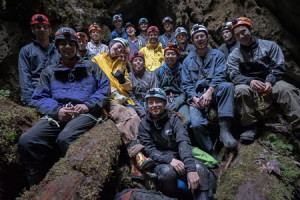 As it was a big cave and we was over 15 cavers we split up, with at least one warrior and one elder in each group to guide the younglings.

First Nick sat up another rope to repel deeper into the cave where he had a challenged. 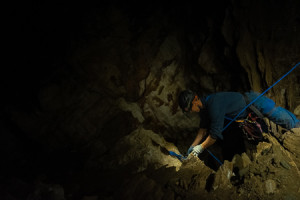 It was a bravery challenge that every caver has to go through at some point growing up.

The challenge was to crawl 15 meters in a tight, TIGHT hole. Duncan the elder that already have done this challenge in his youth showed the way together with Nick. Only one of the younglings, Cheng-Danny Tsai, dared to follow, and completed thereby the first step towards becoming an elder. The others of us had to warm up first and went on our and ascended further up the cave again to go another way.
Duncan the elder sometimes popped up small holes to check on us. He was known for the caring elder in the flock. 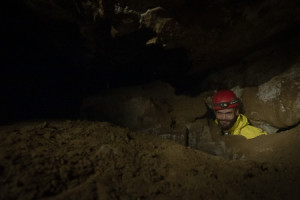 After exploring more of the cave, the rest of the group got brave enough to follow footsteps and crawl the tiny hole. Some took their helmets of to fit through, while others had to accept that moving their heads wasn’t an option. Number one rule here: Don’t panic! Or you will be banished from the caving tribe…

To make sure we got through it alright, Ryan the warrior was following us through, ready for everything with his rescue bag tied around his foot. 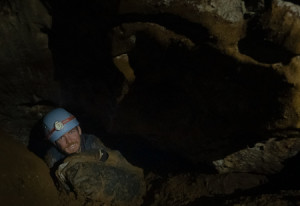 After hours of exploring in the darkness, we had to make a pee break and regroup at the sinks hole opening. 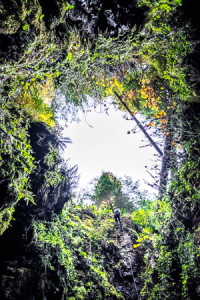 Tip: Don’t drink beer before going into the cave.. you have to ascend the whole way out or pee in a bottle.

While we were taking a break, Nick sat up an anchor at another entrance into the cave.
First you crawl through this little opening and suddenly you enter this big “room” with a shelf, big enough for 3 people. You have to move with caution or you will fall into the deep…
From here you must rappel further down to continue. The next part of the cave was full of climbing surprises.
Luckily cavers are not known for their responsibility, so we had a bunch of fun climbing around slippery limestone, tall sharp broken stratified layers, making boulder moves where it was possible and skip repelling when we felt like it. 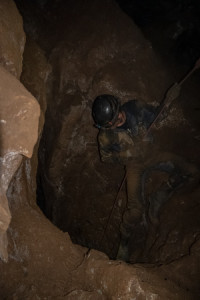 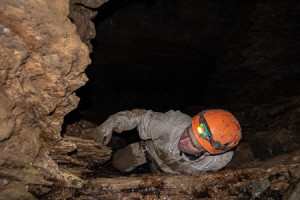 The most amazing thing about caving is when you crawl through tiny holes, not knowing when it will end or what to expect. Suddenly you are in this slightly bigger room with a perfectly flat roof with thousand of small water droplets. 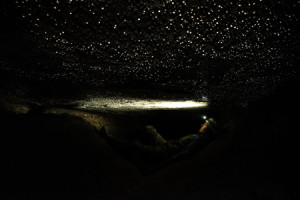 This is considered a holy place and you try to disturb as little as possible. Especially because you might crush one of these small salamanders. 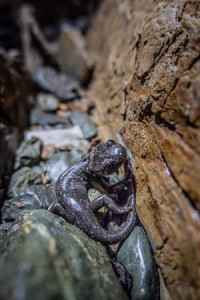 After a long day caving, we get back to camp. Tired and hungry we put up a fire, open the long-wanted beer and start cooking.

Suddenly we hear a car approaching fast, almost sliding several meters upon stopping. Two from the local tripe “ˈhelɪkɒptə(r)- lɒdʒɪŋ” steps out of the car, clearly angry.  One is clearly trying to take the alpha role, making himself ready for a fight. As cavers are peaceful creaturs, we don’t want to get into a fight, and we quickly try to calm him down. After a good 10m the tribe member “ləʊkl duːʃbæɡ “ is calmed down, but only if we moved to a new camping spot. So, we packed up tents, cooking gear and other goods and relocated. But this did not stop us for having fun! The next day we got up and slowly got something to eat. Out professional brewers made coffee for everyone, either by a French mocha or drip coffee style. Sunday we went to a new cave.
This cave had a whole new personality.
It was not minimalistic like the other cave, with many tiny holes. No this was majestic and retaining. We had to do a lot of repelling deep into the cave before we entered this HUGE room. It was so massive that we didn’t have time to explore everything, but we did find a lot of stuff, like a passage that has the most amazing resonance. We were considering having some of our future shamanic ceremonies in that passage. Besides the resonant we found perfect formed crystals growing on some specific rock. It was not Calcite (From the limestone) nor was it quartz.

In the huge room you could see big stratigraphic layers, turned  so they pointed straight down and pieces falling vertical from the roof. There was a lot of mud sliding and water and not that many stalactites and stalagmites, so you could tell it was a young cave, which experienced lots of flooding with water that came from above.

After we got up from the cave we had to hurry out of the area as we got a time limit from the local tribe, and as always, we regrouped at the food stock<3

As everyone was ready to drive to the ferry we went into another problem. There was no ferry ticket until 10pm. So we decided to go to a lake nearby and have a good time. Some was drinking beer, some skinny dipping and others got closer to each other and the fire to get more toasty. Later that night we got to the ferry, said goodbye to our fellow cavers and drove home. Everyone got to their beds around 1pm.
What a weekend! <3

(All pictures was taken by Jasmin Vianne Tordenro, execpt one)