I think most people climb Mt. Matier on their first attempt. They wait for good weather and confidence-inspiring snow conditions, then they do a painless day trip with light packs to the col, stroll up the short bootpack to the summit, and ski cheerily back to the road. But I guess it’s possible that it’s more enjoyable—in the end—to try and fail twice before doing the usually straightforward north ridge in the sloggiest and most inefficient way possible.

We started off at the Keith’s Hut parking lot at 9:00 AM on Saturday, and since Lucy Buchanan-Parker, Alberto Contreras Sanz, Katy Davis, and Birgit Rogalla hadn’t quite got their packs on yet I skinned off around the plowed rubble to find the start of the trail. What I actually found was a woman peeing. I said “Uh, oops, sorry” and tried to look away towards anything that wasn’t peeing. She pulled up her pants and asked where we were headed. I said “the Matier-Joffre col”, and she said “Oh, over the ridge?”, and I said “No, just up to Keith’s Hut”—and she paused. “This isn’t the Keith’s Hut parking lot”, she said.

With some chagrin we left the Cayoosh parking lot and drove along to the Keith’s Hut parking lot. We should have known better (actually, Katy did know better but we didn’t listen). About 15 minutes along the trail Alberto realized he had forgotten his lunch, so we turned around and retrieved it and started out from the car for the third time. When we made it to Keith’s Hut, Lucy and Katy took off to do some skiing (neck issues meant they hadn’t planned to head to Matier). Birgit, Alberto, and I continued up towards the Matier-Joffre col with two disgustingly heavy packs and one very light one. 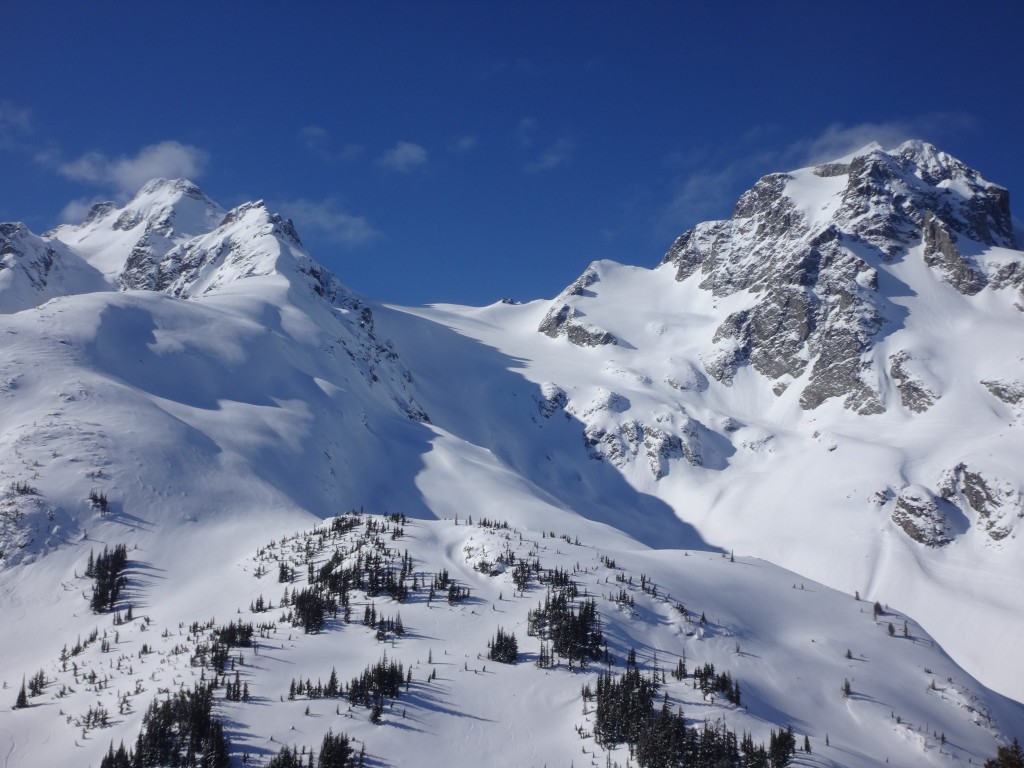 January and February brought such a bad flair-up of asthma for Birgit that she was wheezing just walking around town, but the weather was perfect and we couldn’t miss the opportunity to finally try Matier, again. We hoped that a week of asthma treatment and a light pack for Birgit would make it possible to skin very slowly to the col, camp, and summit Matier the next day. This meant Alberto and I were carrying most of Birgit’s overnight stuff, plus the glacier gear and all the communal stuff, as well as litres and litres of tea for whatever reason. We did just manage to keep up with Birgit. Still, it can’t have been much heavier than failed Matier attempt #1, when the “turns all year” craze inspired Richard Shaw, Mirko Moeller and I to carry skis nearly to Motel 66 in July for Richard’s birthday (we hiked back down to the car in the morning after hailstones communicated the appearance of an unexpected storm to our sleeping faces).

“I’m pooped”, said Alberto when we reached the col. But it was sunny, and we figured it was better to try Matier right away in case the weather turned on Sunday. We hadn’t brought ski crampons, and we regretted it. After struggling up the first icy slopes of the summit for a short distance, we abandoned our skis and put on boot crampons. Walking was much easier, especially over the ice, but the crampons slipped out every third or fourth step on little wind slabs. These slabs wouldn’t bury a person but they might knock you off your feet, and self-arresting seemed difficult on the cross-loaded chequerboard of soft slippy bits and hard slippy bits (plus, falling and crampons don’t mix very well). It was surprisingly stressful, especially on the final traverse of the summit ridge, where tripping wasn’t ok. 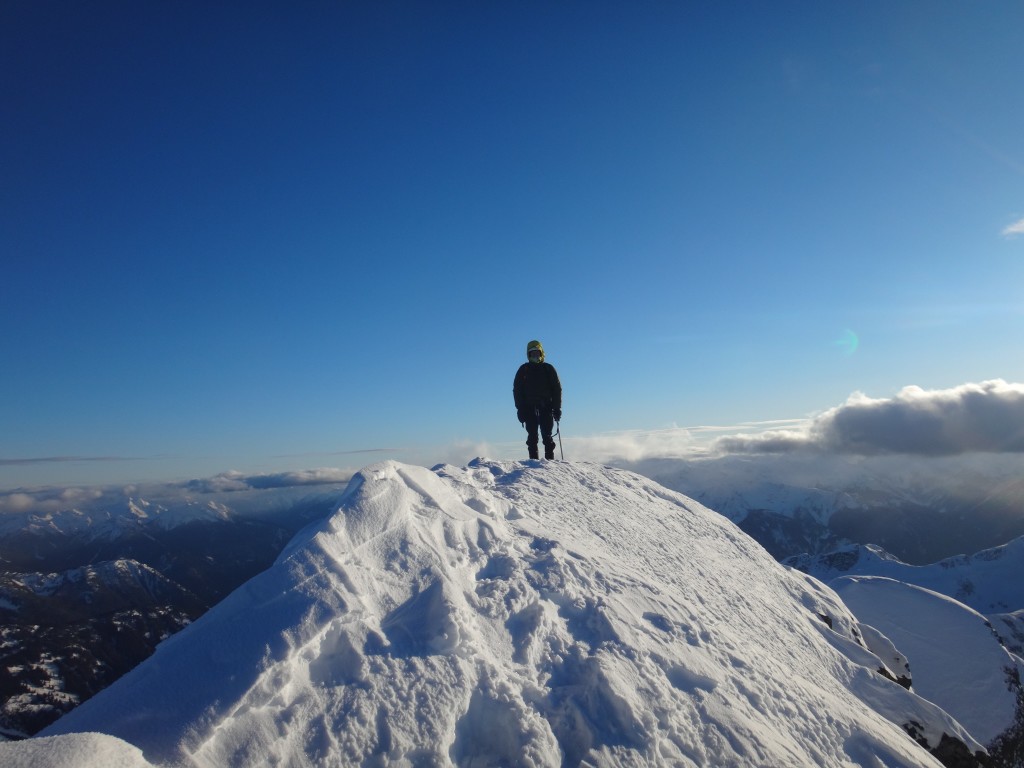 The Michelin Man was there too. Photo Birgit. Alberto probably took more photos but this is the only one that Birgit has from Saturday.

It was very very cold and a bit windy, and I hadn’t worn long johns. Thin cotton underwear were no match for the conductive prowess of the metal zipper at the front of my ski pants, and the cold was biting where frost bite is an especially scary prospect. Luckily it occurred to me that everyone always comments how my spare toque looks a little like a condom. After a bit of a dance and some careful positioning, a thick woolen codpiece saved the day.

When we made it back to the col the sun was setting. Alberto was still pooped, and he wasn’t the only one. Poopedness was exactly the reason—after failed Matier attempt #2 with Joe O’Brien, Julien Renard, and Caitlin Schneider (thwarted by a tenacious cloud and a not-very-tenacious slab)—that Birgit and I decided that it is silly to carry overnight packs when a day trip to Matier is simple in winter. But on attempt #3 Alberto, Birgit, and I were too pooped to generate much body heat, so we did the best we could to undercut our original plan and maximize net inefficiency: rather than camping, we skied clumsily back to the hut in the dark and deposited our packs where we ought to have offloaded most of their contents a few hours earlier.

On Sunday, reunited with Lucy and Katy, we lazed around until the crowd had left the hut, packed, and skied a few fun laps before making our best effort to beat the Whistler traffic back to Vancouver. 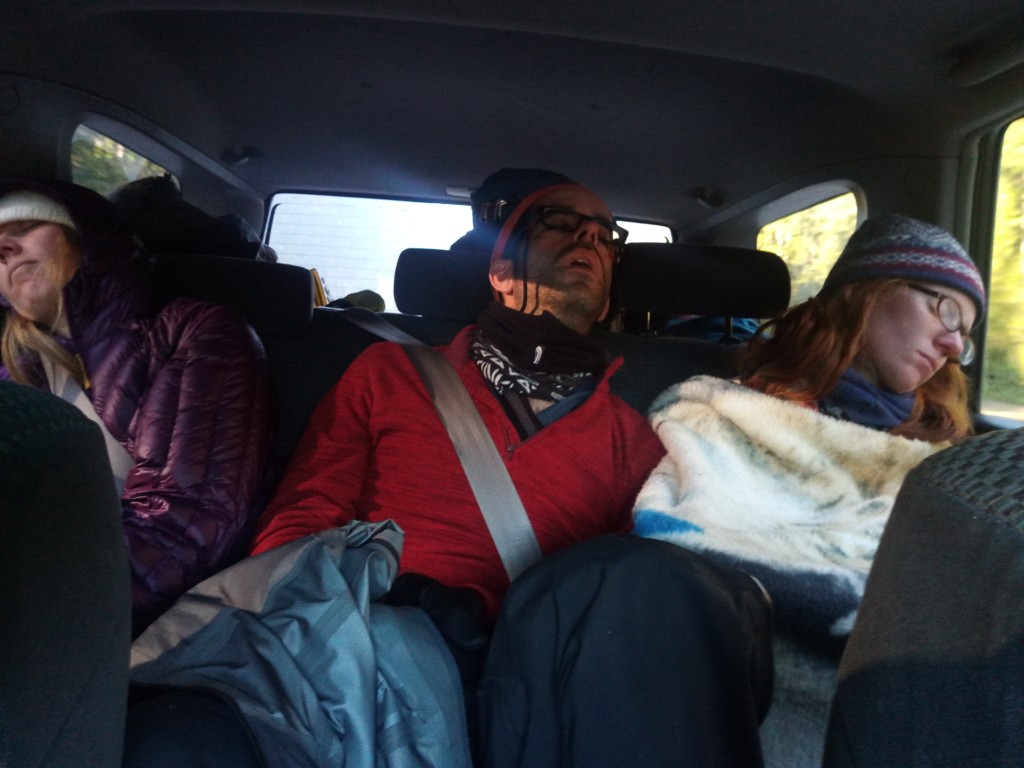