A few summers ago, Ross Campbell, Natalie Makepeace, Gabe Frame, and I had quite the adventure circumnavigating Garibaldi Lake. Near the start of the trip, a bear broke into our bear hang and ate a large portion of our food. Hungrily, we wandered over to Sphinx hut, where to our surprise we were greeted by paddle-boarders (strangers turned friends) that had crossed the lake. They prepared a delicious fish stew for us, with fresh-caught trout. Fueled by the fond memories, the seeds for this story were planted.

This year, Vincent Hanlon’s Christmas gift to me was ice fishing materials: line, hooks, and some shrimp bait (plus a freshwater fishing license). Now might be a good time to note that Vincent and my fishing qualifications are very limited. Specifically, we both managed to get a fish hook stuck in body parts as young kids (eyebrow and finger, respectively), and had to get a doctor to remove it.

Fast forward to yesterday. Vincent & I skinned up the switchbacks in the sun and got up to Garibaldi Lake around lunch time. Our first hurdle: digging through the ice. A couple of months ago, Vincent inquired on the message board on the nature of the ice structure of Garibaldi lake, with a wide variety of responses. Now we can settle it once and for all: it’s a layer cake! In total we dug/chopped down to about 1.4 m to get to the fully open water. Within about 30 cm below the surface, water seeps in through the slush. From there onwards, it alternates between more solid ice layers (difficult to get through even with an ice axe spike) and slush layers. Our method for digging involved ski poles, ice axes, and avalanche shovels, and eventually we had to submerge our arms with the ice axe to break through the bottom layers. 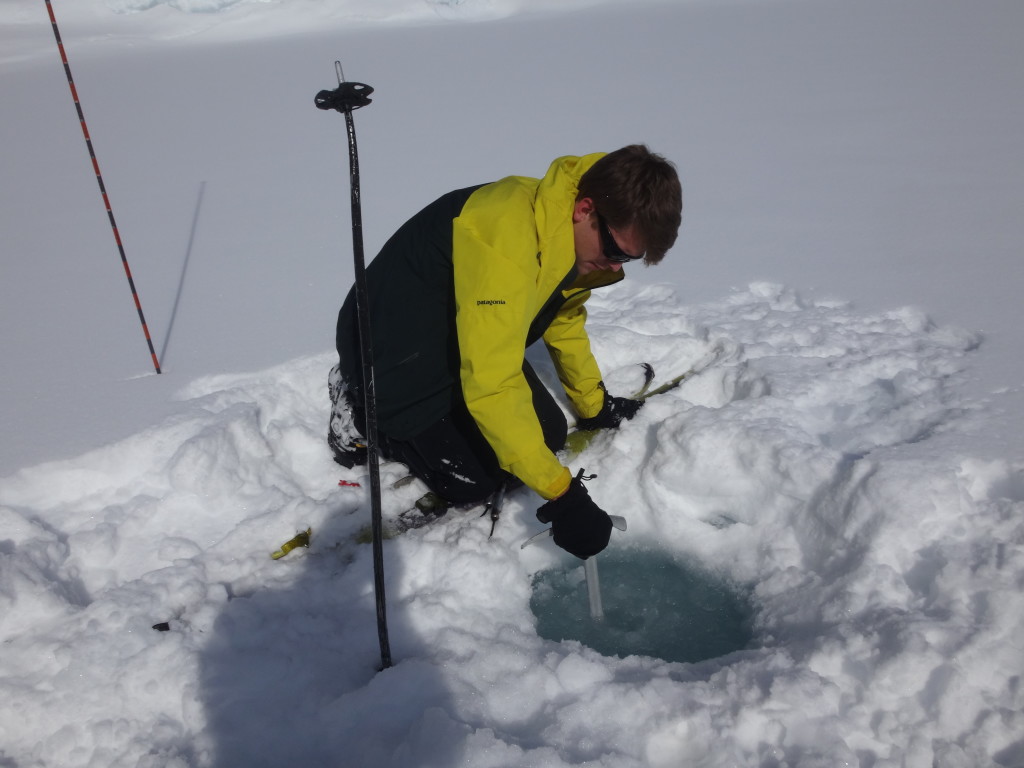 Hurdle 1: getting through the ice. 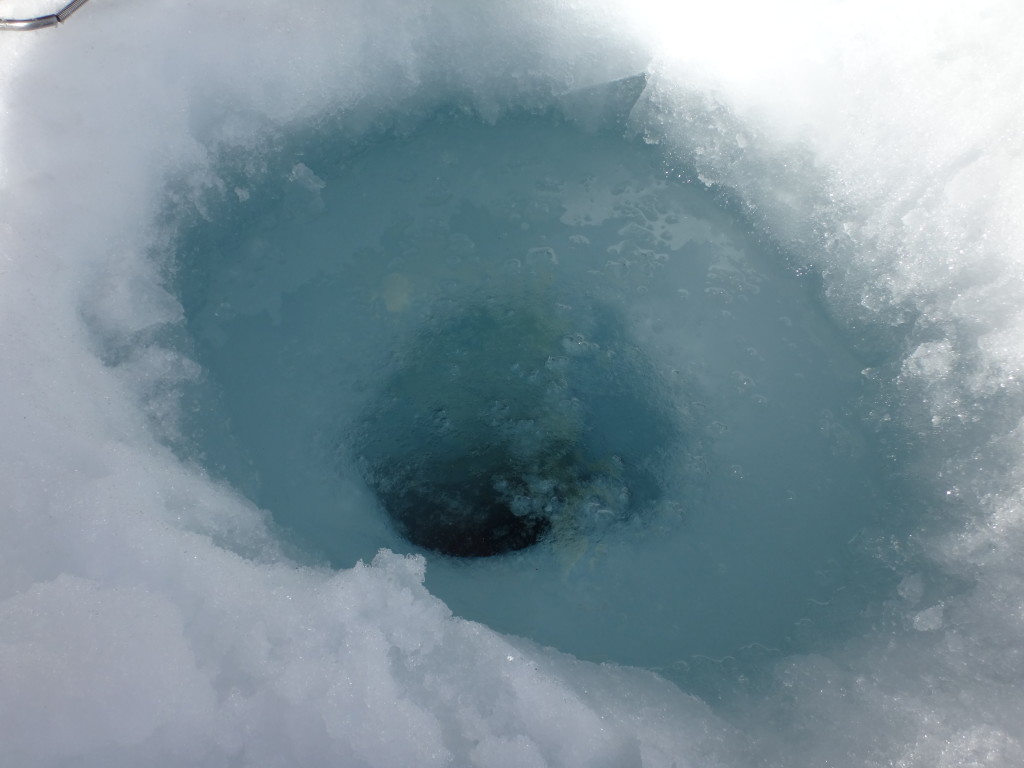 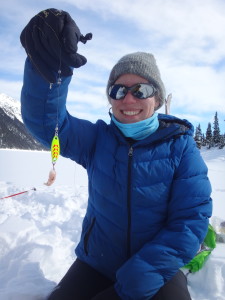 The next unconventional component of the setup was the fishing rod. Since I don’t own one, I used a ski pole instead. The main difference is the ability to feel slight twitches on the line and having a reel. 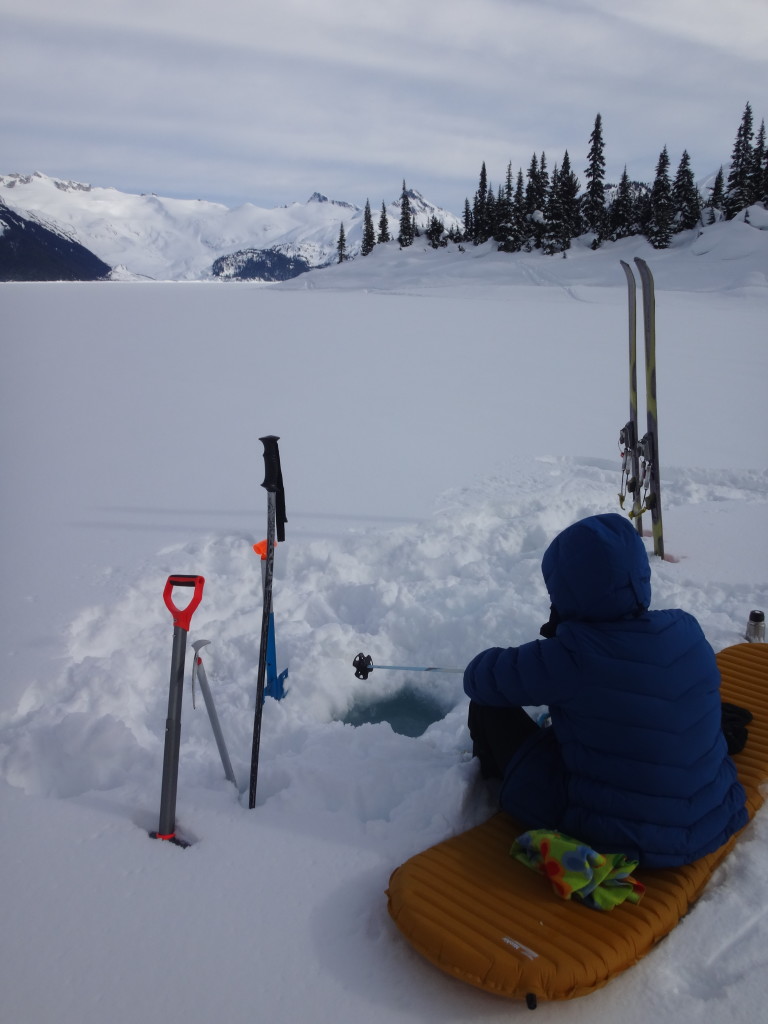 Two and a half hours passed without any excitement. Sitting and looking out across Garibaldi Lake in the sun was a nice alternative to the long, physically exhausting days that we usually spend outdoors. A good reminder that there are many ways to enjoy being outside.

I lifted my ski pole and it felt a bit heavier. “Vincent, I think I might have a fish!” “Quick, run backwards!” Vincent yelled. I turned around and ran away from the hole postholing through the snow. Vincent, who was looking down the hole, made an excited sound and suddenly, a fish flopped on the snow beside my thermarest. I couldn’t believe it. With the fish flopping around, we realized our next problem, “shit — we need to kill the fish, I don’t want it to suffer.” A smack from the adze of the ice axe on the head of the fish produced a gruesome scene of bloodied snow. I was terrified as the fish suddenly flailed after it had stopped moving. “Shit shit shit, we’re botching this.” A few more whacks from the ice axe and the fish was mostly still. Thank god we later found out that fish can flop around for a while after they are already dead. An important lesson on the gruesome reality of killing an animal.

Within a minute of putting out my hook again, I felt another fish on the line. I ran backwards and out flopped another trout. This time Vincent & I had the technique down: I carried the fish over to his ski, held it on the hard surface and Vincent hit it with the ice axe; it died fairly quickly. Tonight we are preparing a meal with them, and we’ll be very grateful for the food they provide. 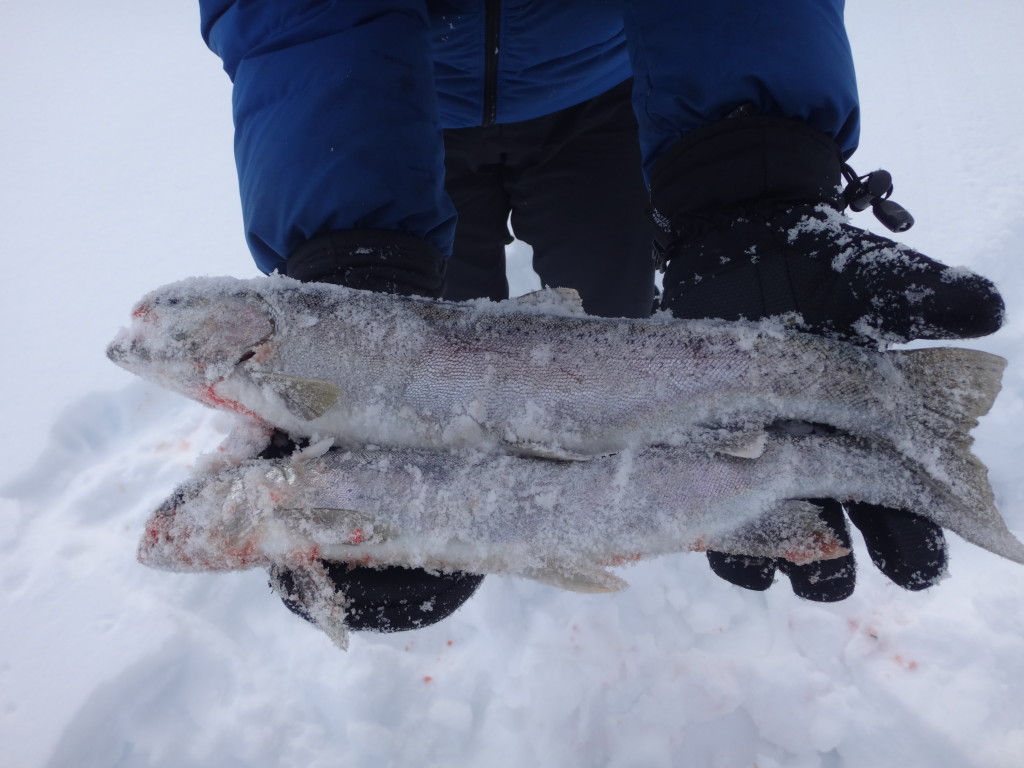 As we were packing up, VOC friends (Alberto Contreras-Sanz, Ross Campbell, and Lianne McRadu) passed by on the last leg of their Neve-in-a-day. We chatted for a bit and split ways at the Barrier. Neither Vincent nor I had skied the Barrier before and the snow was bad, but it was such a short cut! Looking at the Barrier from close-up was very cool, although having studied geological hazards, I felt a bit uncomfortable.

At the car, with the last bit of leftover daylight, it was time to gut the fish; a gruesome spectacle. On the way home, we stopped at Tim Horton’s for a french vanilla and to wash trout guts off my hands. And thus ended my most Canadian day yet. 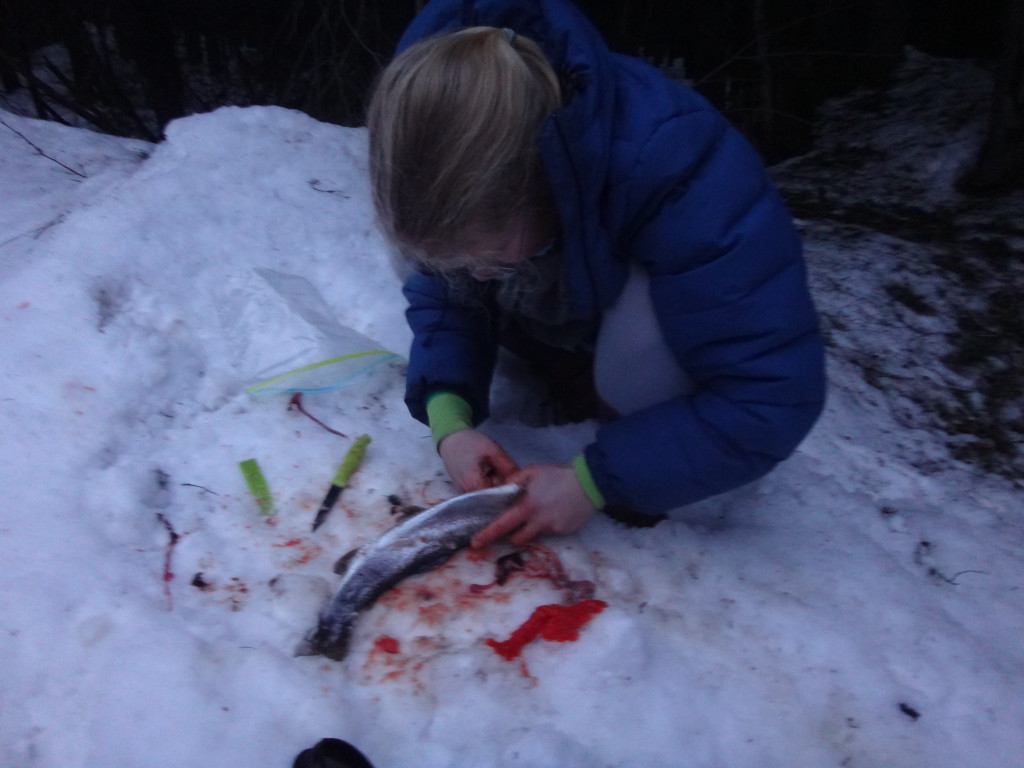 Gutting a fish — a gruesome spectacle.

7 Responses to An unusual pairing: ski touring and ice fishing