Posted on September 3, 2019 by Tereza Jarnikova

— Some of the North Cascades are very accessible from Vancouver by train+bike, and very rad.

— 90’s steel bikes fare surprisingly ok on logging roads, but most other bikes would fare better.

— Welcome Grocery is awesome and deserves your custom.

— Bears: good for you in moderation?

A bit ago, I became interested in the idea of two-wheel access mountain trips. Partly due to our social circle’s preoccupation with the effects of climate change on everything, partly inspired by the two-wheeled exploits of various VOC friends & acquaintances, & partly because bikes pretty reliably spark joy for both of us, Ola & I set about planning a pedal-powered expedition to the North Cascades.

Plan A, Baker, is more or less melted out this year – see Effects of Climate Change on Everything – so at the suggestion of Joe, we turned our sights to the Twin Sisters in the Snoqualmie wilderness. Four days off, two road bikes, an ample supply of Sidekicks & No Frills Instant Coffee (let us not delve into the climate impacts of No Frills Instant Coffee), freshly made framebags to carry the latter two (thanks Martin!) & we were off.

Our journey’s prologue began on Thursday night, as we squeezed ourselves + bikes amongst the commuters on the West Coast Express to Mission. Upon arriving, we quickly discovered that there’s limited flat ground in Mission that isn’t a strip mall, railway tracks, or someone’s farm. With night on our heels, we set about solving the question of where to lay our heads. Option A, the railway tracks, was quickly abandoned when I discovered barbed wire and remembered that trespassing on railway property is technically a felony and I’m not even Canadian. After some clambering over hedges, we eventually settled on trying to make ourselves inconspicuous in the corner of someone’s field, tent free. We enjoyed a pleasant evening of cheese and meandering conversation before falling asleep under a clear sky. 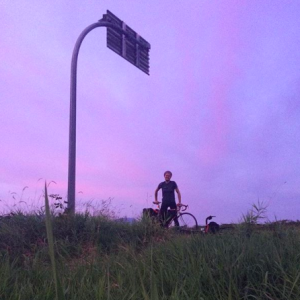 Ola as seen from the ditch

The first proper day of our journey began around four in the morning with a gentle intermittent drizzle. We valiantly ignored it for some time, but eventually the puddle we found ourselves in became too deep, so we packed up soggy possessions & departed, plowed mouse style. 7 AM found us drinking bottomless coffee & waiting out the rain in a diner in Abbotsford. Because my stomach summarily rejects anything consumed before 10 AM, I tried for some dry toast. Ola, for her part, ordered a milkshake… This fuelled us for a delightful roll to the Sumas border, where we aroused the least amount of suspicion I’ve ever aroused at an international border. The border guard seemed genuinely excited to see two [white] women [with the ‘correct’ passports] on bikes with mountaineering equipment. When he asked where we were sleeping, and I said “hopefully at the base of the West Ridge”, he actually laughed and sent us on our way.

Northern Whatcom county is great for cycling! We spent the morning rolling through it at a gentle pace, before stopping for groceries at Welcome grocery store. It proved a bit understocked in the bread department, so we were promised to be eating Tillamook Cheddar and Western Farms Wheat bread for some time… The afternoon found us rolling up Mosquito Lake Road & the ensuing logging road. 90’s road bikes aren’t really the vehicle of choice for logging roads, but we made it to the gate with only one flat. Stashing our bikes, we made our way up a lattice of logging roads to the trailhead, where we pitched a tent and hunkered down for the night. An hour later we heard alarming yells, but they turned out to come from nice people on mountain bikes, out for a rip up from Bellingham after work. Our 24 hour meander had taken them about 3 – cars do cover ground faster.

The next morning dawned grey but not rainy. The North Cascades in late August are exactly as you’d expect them to be – fields of St. John’s Wort take turns with scraggly conifers & creeks banded by slide alder. There are boletes and blueberries and moss-covered logs. That we should be so gosh damn lucky! Eventually the forest ceded to the alpine and we teetered along the west ridge, pretty enthusiastic about everything except Western Farms Wheat. The scrambling was among the loveliest I’ve ever experienced – a bit challenging, exposed and not too chossy. How do small flowers grow in this orange rock desert? 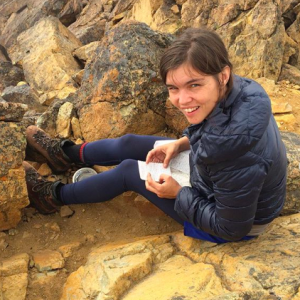 Summit views were appropriately brilliant when the mists eventually parted. The descent was down a properly sketchy couloir – passing someone’s rap sling, I remember reflecting that rappelling didn’t sound so bad right now – and an interminable scree slope to an alien-flat terminal moraine littered with erratics. After a dinner of watery sidekicks and a bolete we found growing in the terminal moraine (why?), we slept soundly through a gentle drizzle. 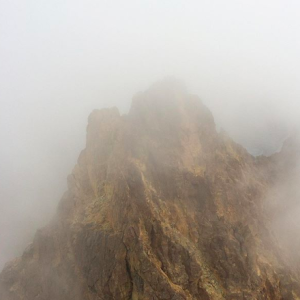 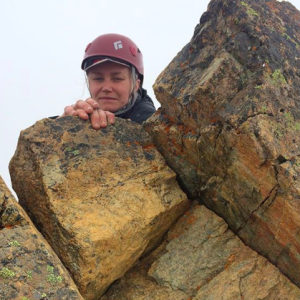 The next morning found us attempting the west ridge of the South Sister, but this plan was relatively quickly scuppered due to shit weather  (but! for more ambitious/fairer-weather/etc parties: that whole ridge of 5 peaks looks amazing!). After a game of cribbage & some No Frills Instant Coffee [Ola: “It’s so great! You can’t compare it to coffee, but if you don’t, it’s so great!”], we set out for lower altitudes. 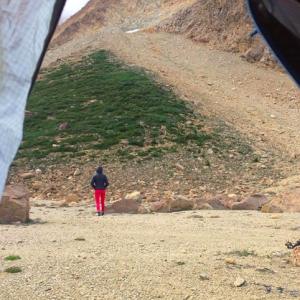 And here this trip report should end with “and then we biked home along the Fraser Highway, which is nothing to write home about.” And, indeed, it would end that way if I hadn’t suggested that we take the other logging road down. In my defense, I come from a land where roads and paths by and large stay put for hundreds of years and we incentivize senior citizens with railway passes and buckets of paint to mark them in bright primary colours. In my not-defense, I’ve spent enough time in these parts/ have some common sense/ should in general Just Fucking Know Better that in the glorious bioregion of Cascadia, roads do *not* stay put & instead become deactivated / fields of Devil’s Club taller than me / as near enough to second growth forest as makes no difference, all while being marked as roads on the topo.

Anyway, we were some ways into crashing through the second-growth when Ola mentioned, in her flat Slavic deadpan: “There’s a bear following us.” I turned. There was. It was 30 meters away.

The nice thing about bears is that they’re very imminent. They tend to at least temporarily dislodge any and all worries from small to existential, as you become focused on looking big and primordial yelling. I’ve been on the receiving end of several half-hearted courses on How To Deal With Bears, which all boiled down to “Say: ‘Woah, Bear.’ “ . We went more for the primordial yelling approach.

To our credit and maybe slight surprise, no one panicked and we continued crashing through the undergrowth, yelling in our zen-state. At this point we were rather off the theoretical road, so we repaired to the creek, which had the correct bearing and should in theory eventually be crossed by a real-life bridge. Either to lift our spirits or make noise, Ola composed songs:

“My shoes they will dry

My socks they will too

We waded until we were elbows deep and the creek became impassable, at which point we fished out the tent poles that we’d been brandishing in an attempt to look too pointy to eat, and stuck to its eastern slope. “I hope we get to the grocery store before it closes” became “I hope we get out of the woods before nightfall” and the phrase “not out of the woods yet” took on layers of meaning. It was at this point that Ola, in the tones of someone inquiring about paying for their coffee, asked a question I won’t soon forget:

“Do you mind if I keep yelling?”

“THE MOUNTAIN WAS THE EASY PART!”

and other slogans of a more confessional nature that shan’t be repeated.

Anyway, we made it to the bridge eventually and were very happy to see it indeed. The whole thing took less than 2kms/2hrs in spacetime but lots more in our hearts. Remember kids, only follow logging roads you know and trust. I like to think my personal d[Stupid Idea]/dt is tending the right way, but sometimes it becomes depressingly unclear… 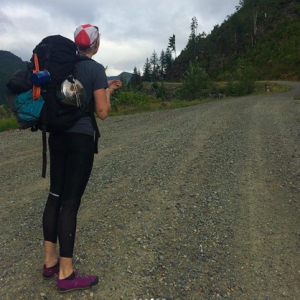 As we made it to our bikes, it started raining heavily, as though Providence was commenting on our stupidity. We bombed down Mosquito Lake Road at golden hour, grinning wildly, properly stoked to be alive. Somehow, Welcome Grocery store was open to sell us beer and pumpkin pie, and we devoured both under the halogen lights.

Thanks to the extreme kindness of the owners, we slept on the lawn of the Welcome Grocery and spent the next morning there, drinking drip coffee and reading “Whatcom Watch” (which had a thoughtful analysis of what Whatcom Transit Authority could learn from Kingston, Ontario) and listening to Meat Loaf’s “Paradise by the Dashboard Light.” Ah, vacation mornings…

And then we biked home along the Fraser Highway, which is nothing to write home about.

From Gary Snyder’s “this poem is for bear ”:

“As for me I am a child of the god of the mountains.”

A bear down under the cliff.

She is eating huckleberries.

They are ripe now

Soon it will snow, and she

Or maybe he, will crawl into a hole

And sleep. You can see

Huckleberries in bearshit if you

Look, this time of year

If I sneak up on the bear

It will grunt and run

The others had all gone down