Mountain Forecast claimed that while it would be overcast in the Duffey area, Mt Marriott was tall enough that it would be poking out of the clouds on Saturday. Birgit Rogalla, Tereza Jarnikova and I left Vancouver at 5:30 AM, dropped our stuff off at the Wendy Thompson Hut beside the massive luxurious outhouse the ACC is constructing. This thing is a MONSTER. It has two levels. It has its own covered bridge from the top floor of the hut. It’s probably half the size of Brew. Wow. We could learn a thing or two. If the VOC had an outhouse that big it would sleep 12.

We also heard an interesting bit of local gossip from the ACCers. Apparently, the water treatment system on the new Spearhead hut wasn’t finished in time for the grand opening, so in the interim they’re flying in potable water by helicopter! Even though the hut’s right beside a big lake! 100,000 people march against climate change in Vancouver, and yet… 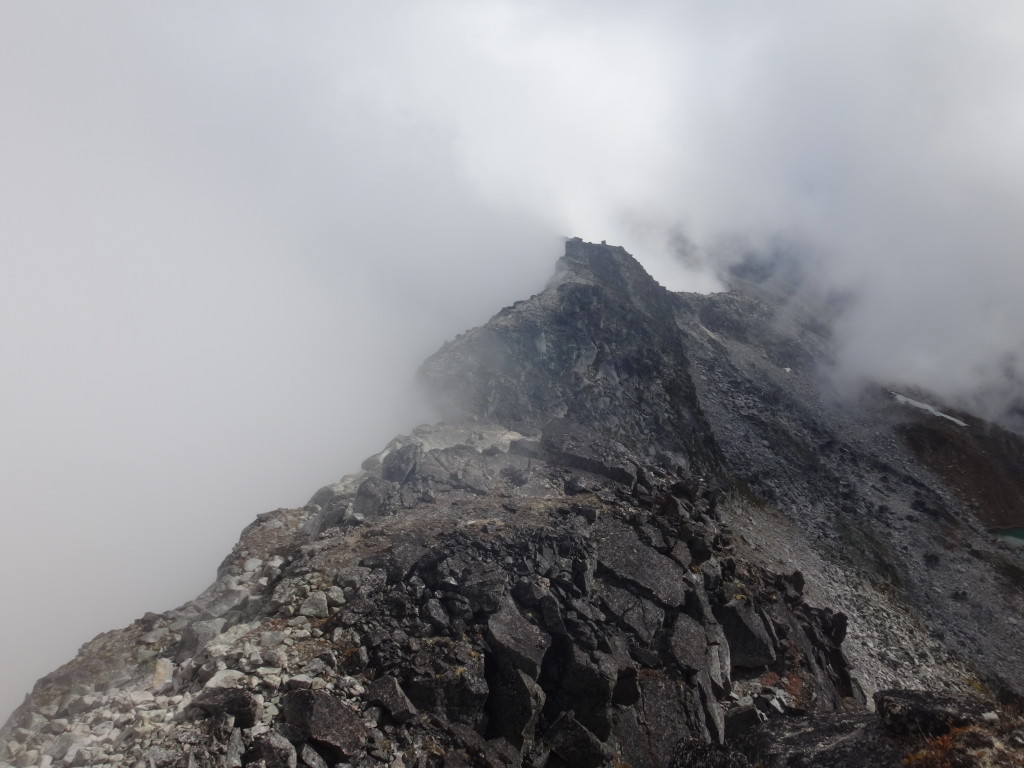 Tereza was sick, so she napped in the hut while Birgit and I wandered off into the fog with a map and competing memories of Matt Gunn’s route description. We started off wrong and arrived at the wrong lake. Luckily it was connected to the right drainage, and we followed the creek up the valley with surprising difficulty: plenty of microterrain that was confusing in the fog. Map in hand, we walked a few unnecessary circles over massive boulders, traversed a hard steep snow slope, then scrambled up onto the ridge and out of the clouds. From there we followed roughly the height of land to the summit and had good views of Cayoosh, Joffre, and Matier poking up into the sun. 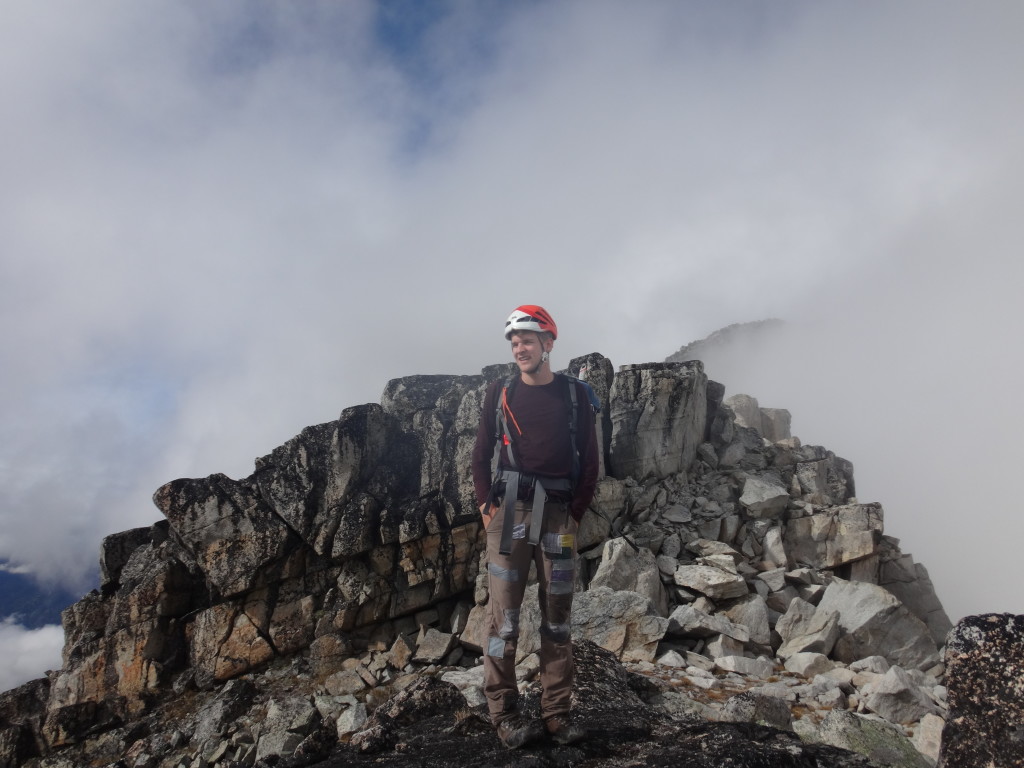 Descending back into the valley, it cleared a little and it was obvious how much we’d gone off route. It turns out that the route described in Matt Gunn’s scrambles book is wrong (or at least, unnecessarily difficult and indirect). He describes walking up the “mini valley” and the crossing a snow slope to gain the ridge by scrambling up climber’s left at the valley’s head. In fact, it’s much better to avoid the snow slope and scramble up the center of the valley along an easy leftward-trending bench under the cliffs (If you’re interested in a GPS track let me know, or look on Bivouac). 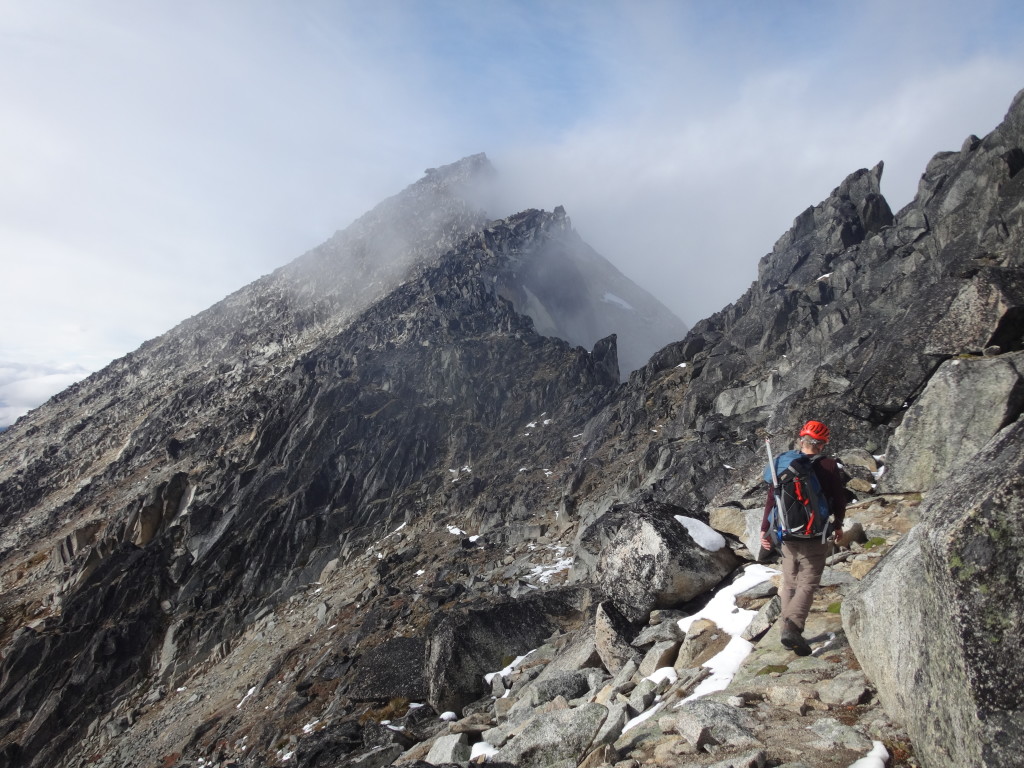 The way down was much faster because we were able to avoid the big boulderfields and walk across the heather instead. We followed the recommended route from the recommended lake back to the hut and arrived just as the sun set. I had trouble getting into the hut to meet Tereza because one of the outhouse-builders was very insistent that no non-ACCers were allowed inside. Luckily Tereza rescued me. 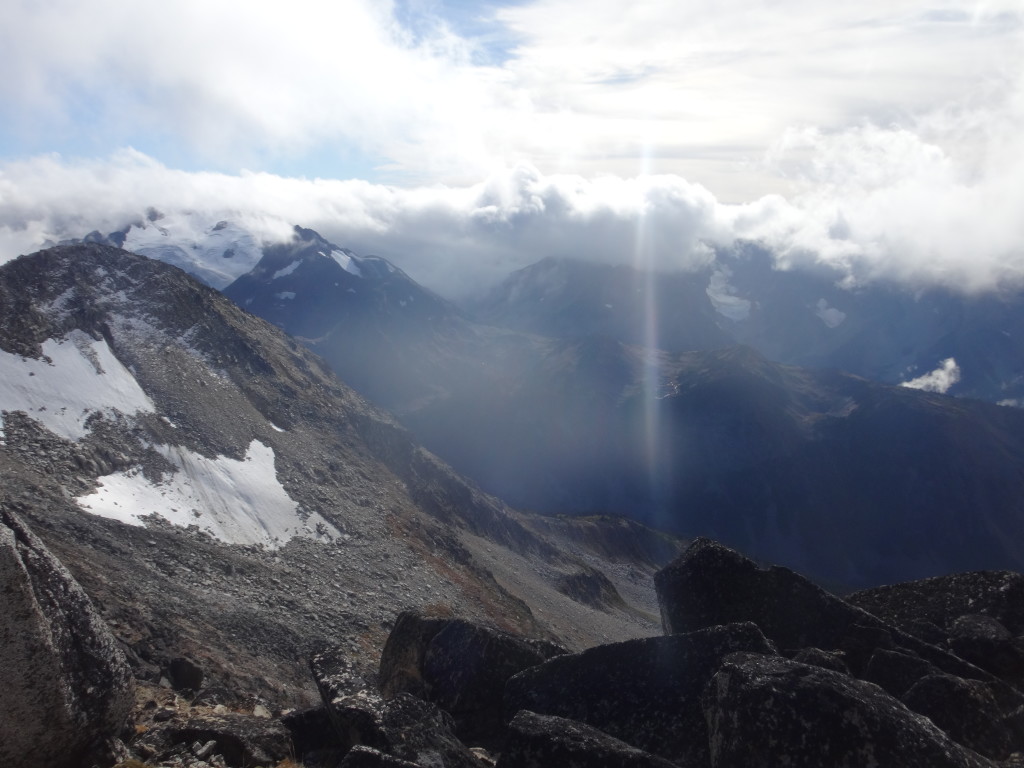 We talked with a very friendly outhouse-builder for a while—Bryce—then headed off into the rain to cook and sleep. In the morning Birgit and I dropped in on a beginner-friendly VOC trip at a nearby lake. They were a bit cold and a bit damp but still cheery (I heard someone slept in their rain gear because their sleeping bag was so wet?!). Before walking out to the cars, we examined the old outhouse, which had a very simple liquid-solid separation system: Two seats! One for pooing, one for peeing, each clearly labelled.

One Response to Marriott Basin + gossip