After our journey to Pangea was cut short (see trip report for that), we headed to Phelix Creek as a solid backup. Our plan was to establish a new route on the north face of Mt. Aragorn. We were pleasantly surprised to a see a recent TR in the hut log book about an incomplete route in need of completion (Lord of the Ringlocks). We hiked over behind Mt. Shadowfax to get a view of the impressive face. There, we tried to identify the route and discussed possible options for how to tackle the climb.

Unfortunately, as fate would have it, that morning we woke up to a good old rainstorm. The day was spent playing cards, practicing haul systems, and doing campus board challenges. We also discussed how viable climbing a north face route would be in the coming days given the precip. For fear of getting shut down, we altered objectives to a more manageable piece of rock – that’s right, The South Face of the East Sub-Summit of Mount Shadowfax.

Later that day, after the rain stopped, we strolled over to the gulley heading up to the sub-summit. With binos in hand we identified a game plan; attack the central feature of the wall and bask in the glory. The oversized marmot sitting next to us let out a screech of approval. Not wanting to waste the seemingly rare sunshine that had sprung upon us late in this fine summer afternoon, I decided to go for a jaunt up Cabin Hill in “record breaking time” – Hut to summit return in 30 minutes and change. A good decision-making celebratory lap. 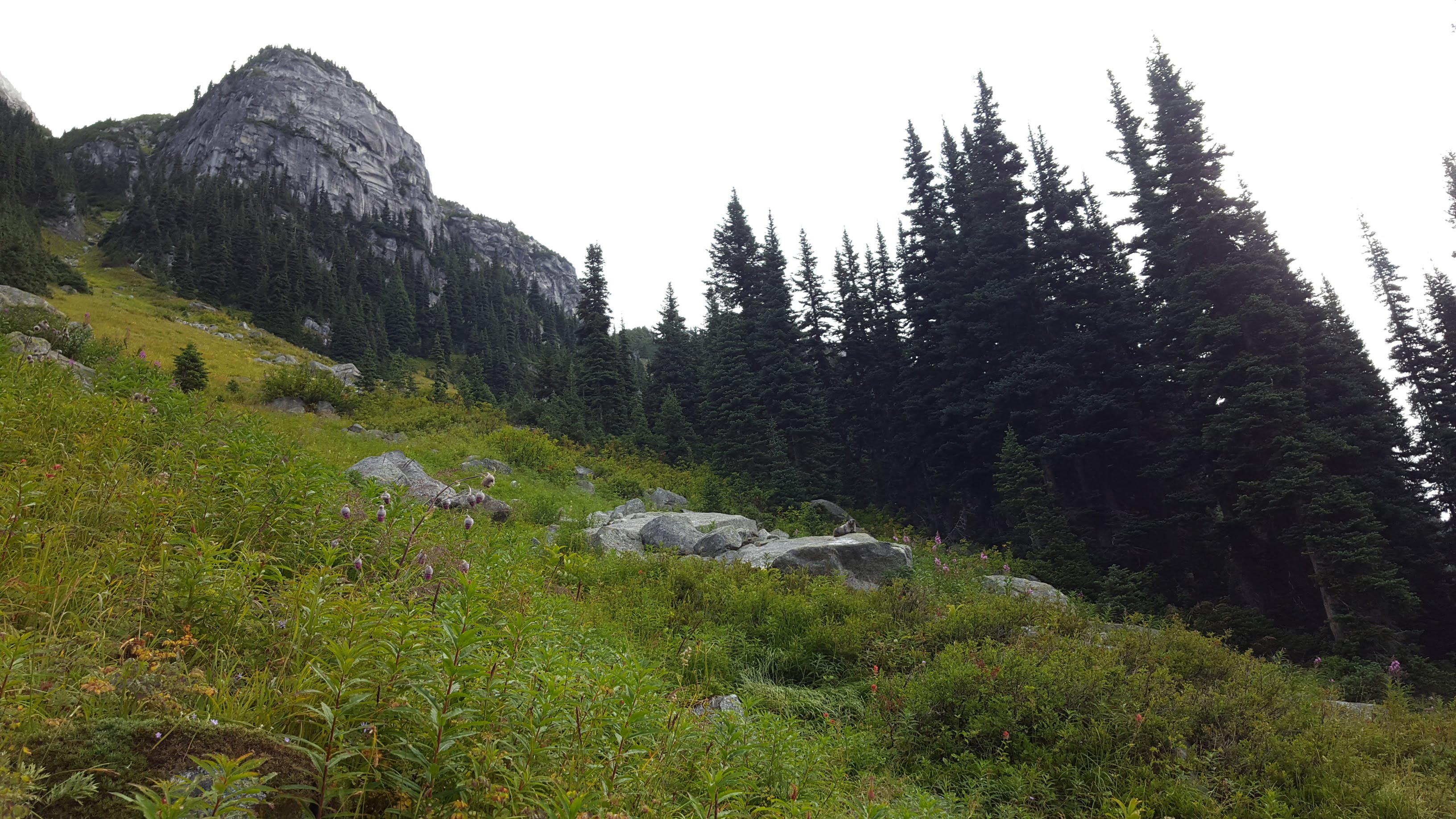 Looking up the gully to the East-Sub Summit of Mt. Shadowfax. Riders climbs directly up the central wall. Photo cred: Duncan Pawson

We scrambled our way up the gulley to the south face where we identified a mighty fine corner that would make for pitch 1. Nick had a go at it before needing a stronger climber to pull through the crux. I was up. After a good lead fall, I mustered up my strength, shoved in a 0.4 and aided my way through. A few minutes later, while aiding through a dirty section, my hand slipped whilst pulling on the stem of the cam (always a good idea). To my bewilderment, my hand slid down the lobe of the cam to the triggers. Out went the perfectly placed cam and down went my body. A small, dead tree, perched on a ledge a few meters beneath me, broke my fall (and itself), shooting shrapnel below. I corrected the error of my ways and finished the pitch (10c).

The second pitch (11a) would take a full group effort to push through. Harlin put in a good attempt but was ultimately thwarted and had to rap down when he realized bolts were needed (he didn’t have the drill). I drilled two bolts but couldn’t quite bring myself to pull the crux. Soon after, I accidentally dropped the hammer on my friends and it was game over; my mental game was way off and I too came down. Nick showed good spirit and whipped a few times at the crux before finally pulling it and displaying some of the finest lead bolting I’ve seen.

Harlin cruised the last pitch (5.8), leading up some really fun, well protected terrain. At the top we had a quick celly before rapping down. We decided to name our route, “Riders of Rohan” – 11a.

On the second rappel, we went over a majestically aesthetic, and impossibly difficult splitter crack – one of the most beautiful I’ve seen (seriously). We quickly decided that this would be our objective for the next day. 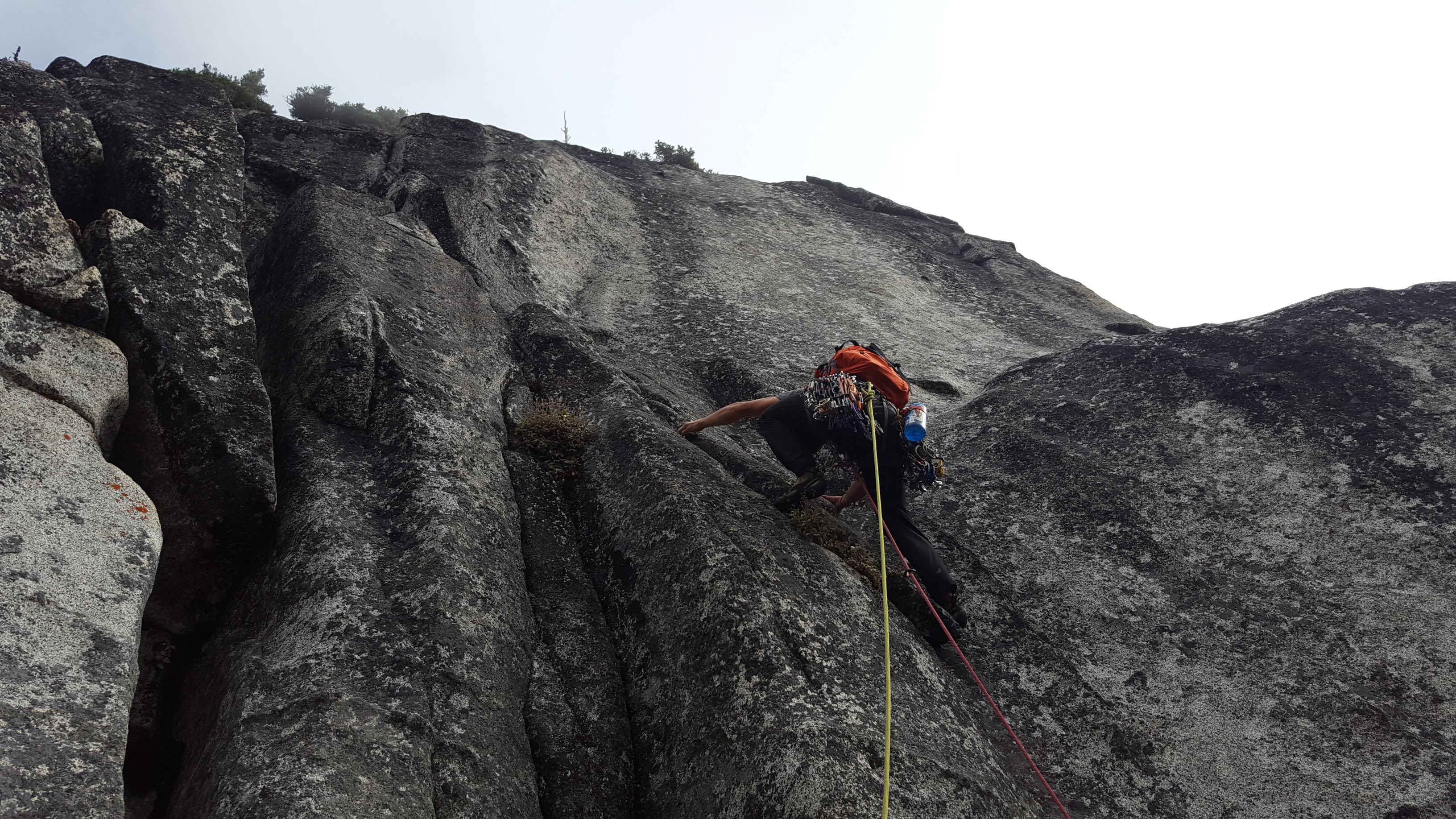 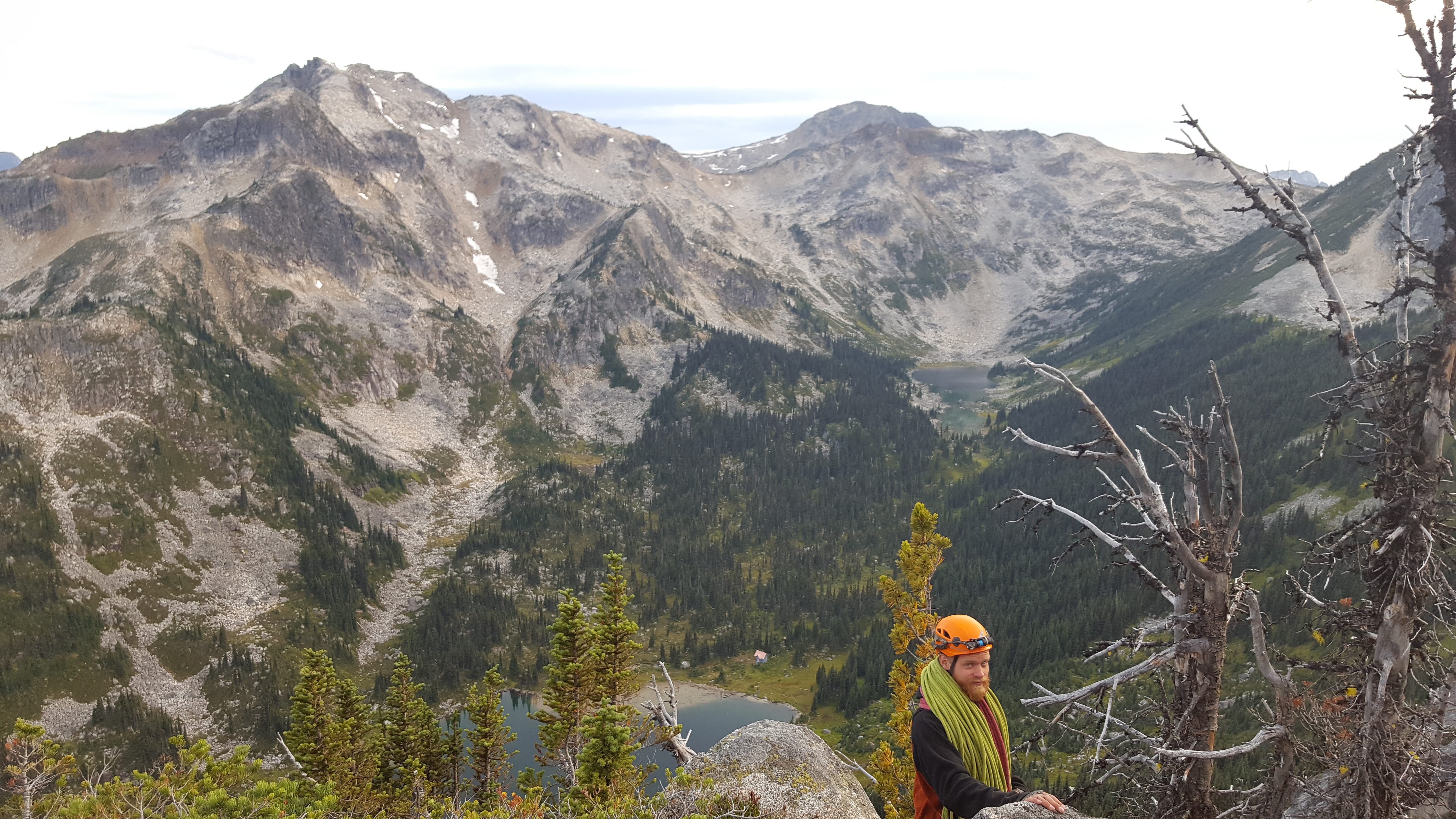 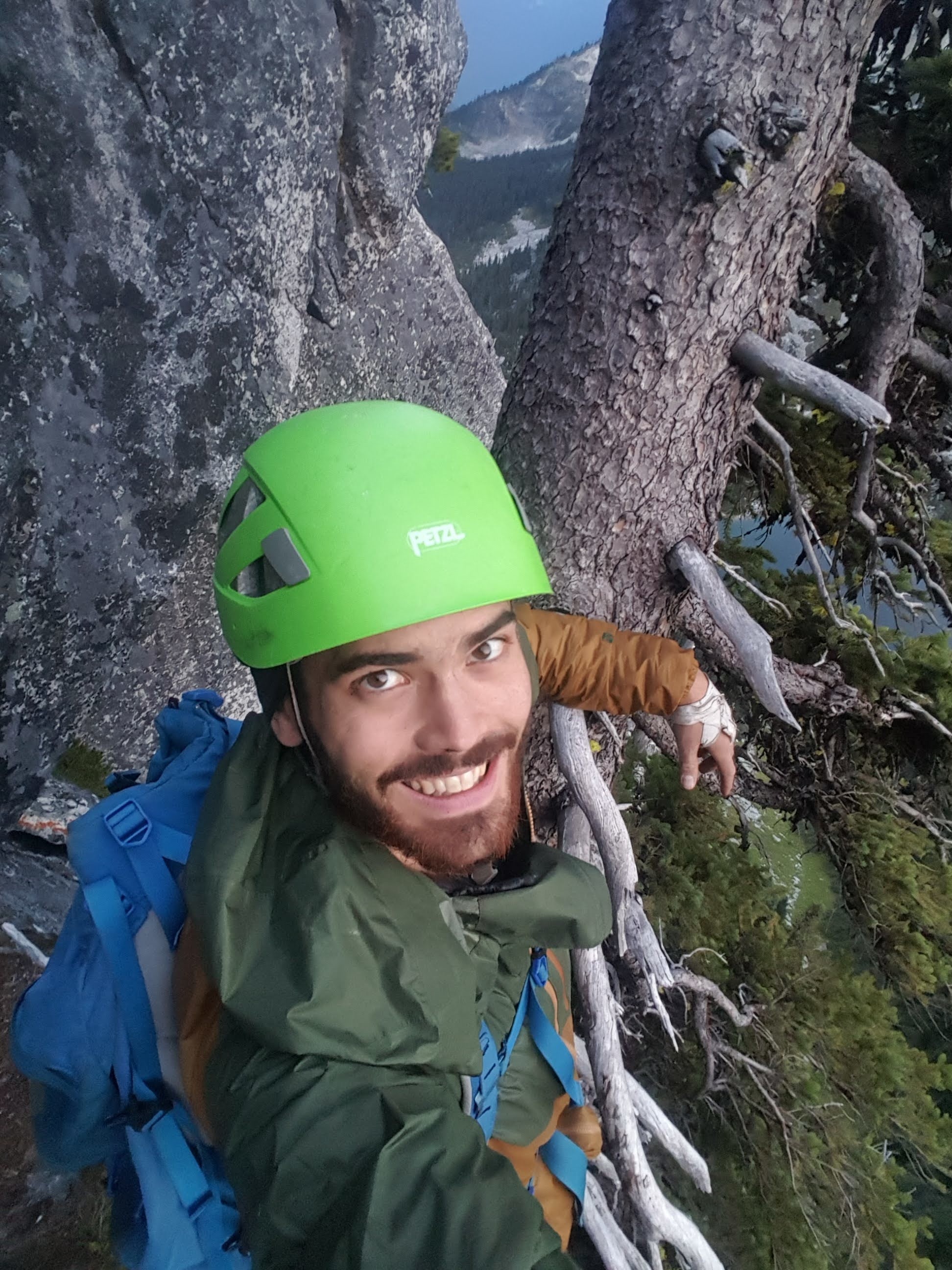 Back up the gulley at the West Face of the East Sub-Summit of Mount Shadowfax, we eyed up “The Crack of Doom”. Nick aided the crack (C1) and bolted an anchor at its zenith. Harlin and I attempted the top rope. It was hard to say the least. Moves are definitely possible but linking them and placing gear is where the real challenge comes in. Alas, it requires better climbers than us to conquer and we would be thrilled if someone took this beast on. It is a strikingly clean, tips finger crack with little to no feet and protects very well with 0.2 – 0.3s. If I were to guess a grade, it’d be somewhere in the 5.13- range, but I also have no idea what that feels like. 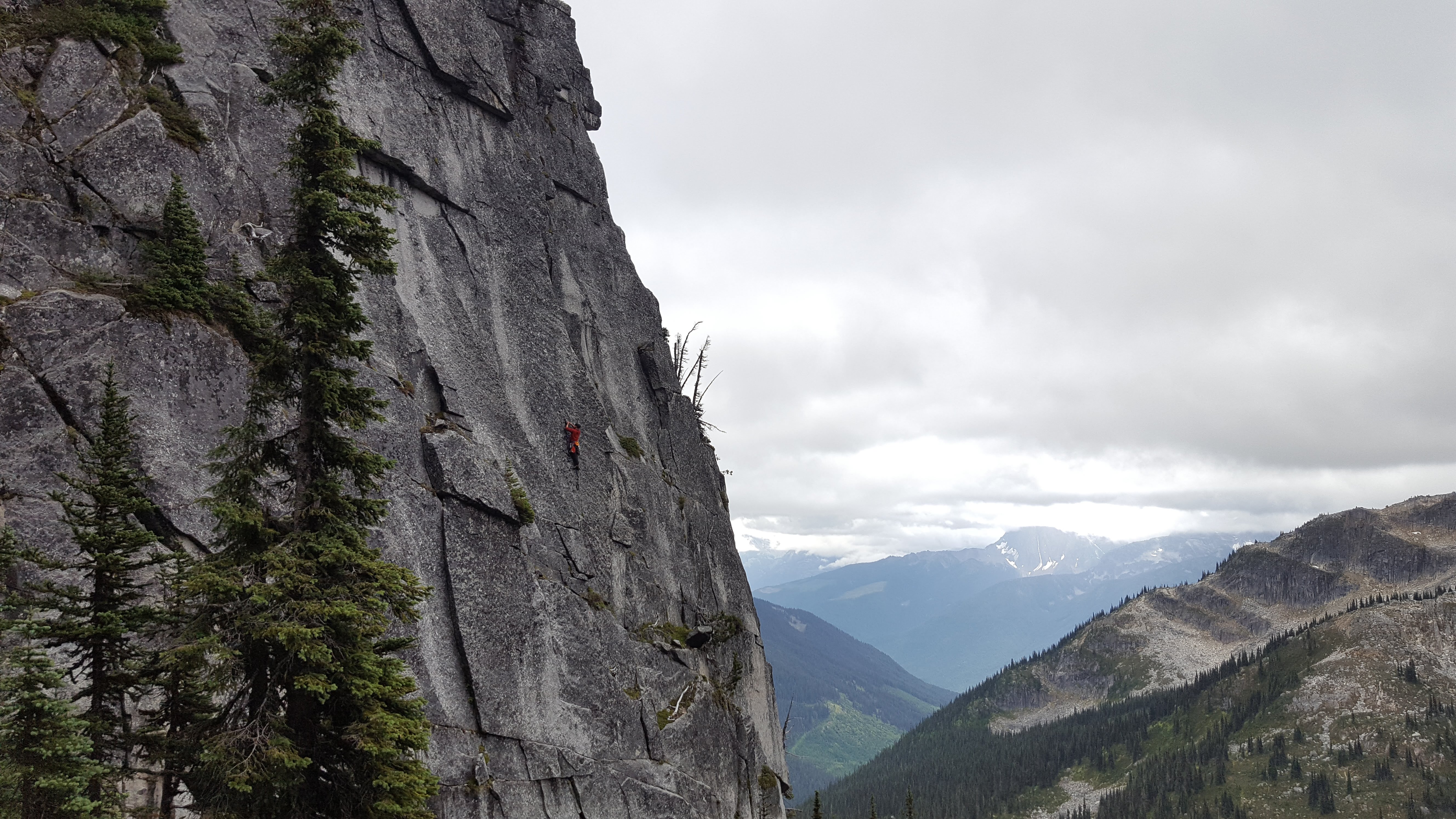 Full route descriptions for Riders of Rohan and Crack of Doom can be found on Mountain Project.

This entry was posted in Climb, Huts, Trip Reports. Bookmark the permalink.

2 Responses to The underrated East-Sub Summit of Mount Shadowfax