Pushing the Limits of Mediocrity: A Cheakamus Canyon Story

“Some are born mediocre, some achieve mediocrity, and some have mediocrity thrust upon them.” – some famous poet dude

I’d like to think that we at the very least managed to achieve some level of mediocrity on a cold October day outside of Squamish. With snow in the mountains and leaves already falling to the ground in the high winds, the four of us (myself, Quinn, Giulio, and Jessica) set out from Vancouver on a hastily planned trip to get in one last day of climbing for the season. After giving up on driving the road all the way to the crag (a preview of the mediocrity to come) we parked off the 99 and walked the whole five minutes to the wall. 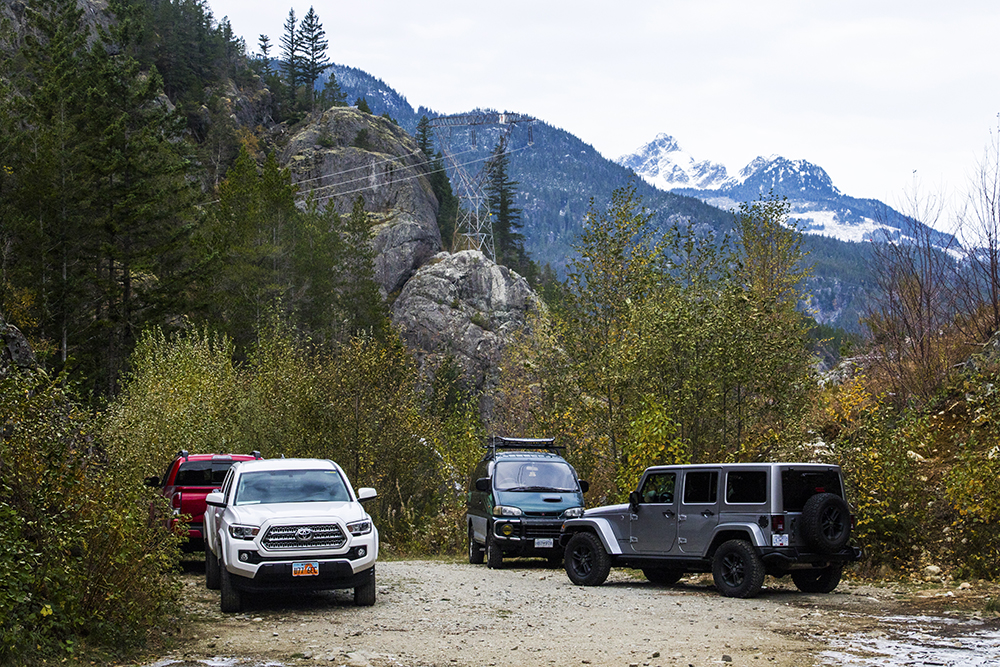 A fair amount of vehicles (including a darn Utahn somehow) made it up the washed out road to park right by the crags, but not us!

Between us we had some of the things needed for climbing success: twelve quickdraws, one rope, and zero cumulative outdoor lead climbs. It’s truly a wonder we all lived to tell the tale. But the idea was to go to an easy wall, Electric Avenue, to get everyone up to speed on the nuances of lead climbing. For that purpose, this wall was excellent – if you ever want a bunch of 5.easy lead climbs to build confidence then you should absolutely follow Eddy Grant’s advice and rock down to Electric Avenue sometime.

The biting wind continued to blow as we arrived and set up at the base of the 5.6 “Amazing Route”. Hint: it wasn’t all that amazing at 8m tall. After a brief tutorial, with topics including the give and take of lead belaying and why back clipping is bad, we each took a turn leading the super short, non-committing four bolt route. Note that everyone had been climbing quite a bit at Skaha the weekend before, so we felt ready to take the next step. 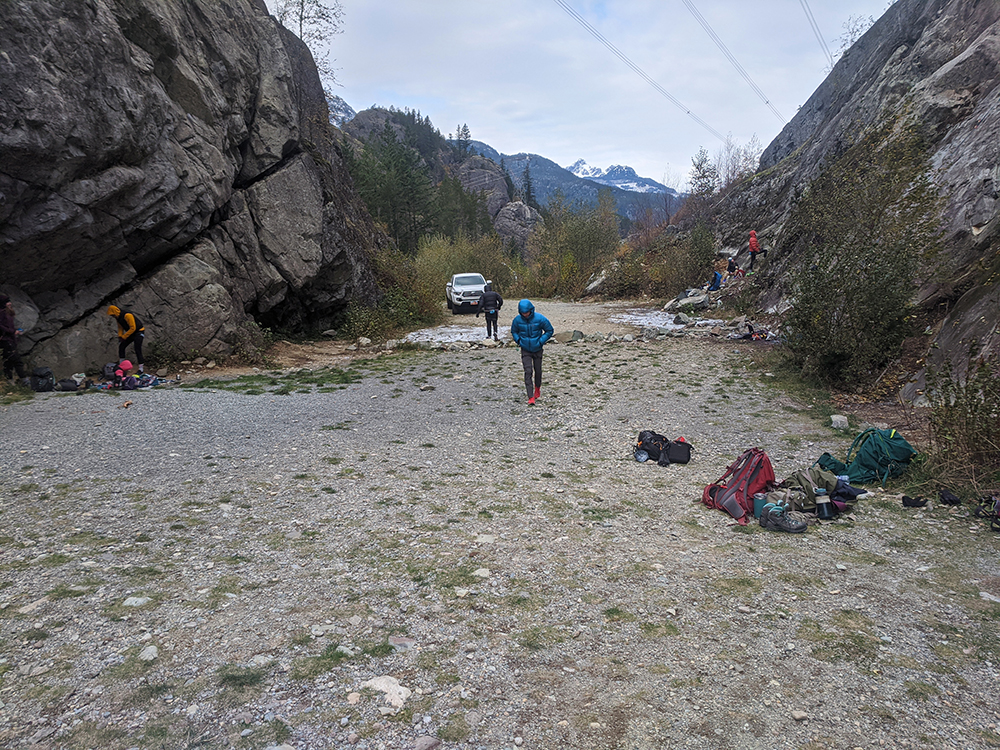 Giulio and Quinn jog in place to keep warm between climbs. Another pair of climbers (not pictured) attempted a nearby route and noped out moments later due to the cold. At least we were fully committed to our pursuit of mediocrity.

After that it was “The Cliff of Awesome” at 5.4, then we moved up to the much longer 5.5 “Tailgate Party” and 5.4 “Park Rat.” Not a single lead fall was had, and everyone got to experience the satisfaction of clipping quickdraws all the way up. 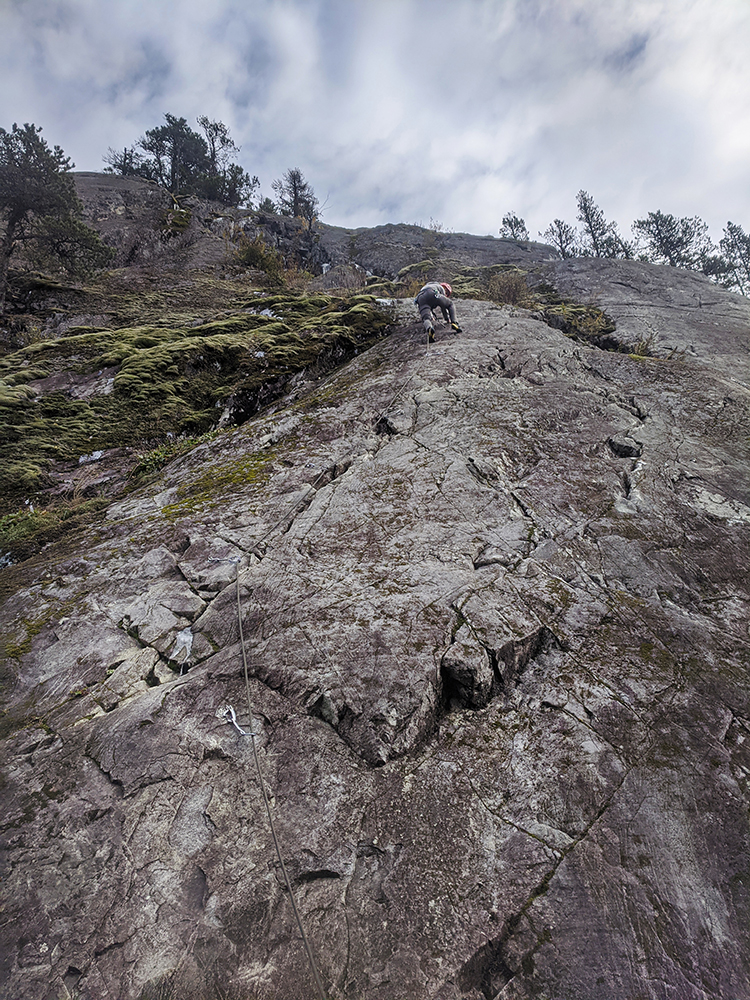 We kept ourselves entertained with lively banter, including the quip from Quinn which led to the title of this very trip report. I told everyone about a recent dream I had, wherein MEC went out of business so Jessica and I opened up a new outdoor store. This time with a twist – for some unknown reason we now had cats roaming the aisles full of gear. Yes, the C in MEC now stood for cats. Mountain Equipment Cats. I have no idea if this was a particular business decision that we made or if they just happened to be inhabiting the building where we opened up. This story is not that important for the trip report, but I feel like the world needs to know.

The family that had been occupying the furthest route to the right, 5.7 “Taiga Face,” looked ready to move on so we jumped onto that one soon afterward. They switched over to the easiest route, a 5.3, to set up a top rope for their toddler – an interesting choice that led to a full on meltdown at the top when it was time for her to be lowered. It’s a bit weird to watch traumatic childhood memories being formed in real time. Anyway, we ignored the wailing from the next wall over as Giulio led the 5.7 and we each subsequently top roped it a couple of times. We then said farewell to Quinn, who had to get home to deal with an emerging situation in his backyard. A bear had apparently snuck into the yard, eaten a bunch of apples, and defecated all over the place. I’m told it was an unbearably shitty situation. (Jessica deserves all the credit/shame for that particular joke). 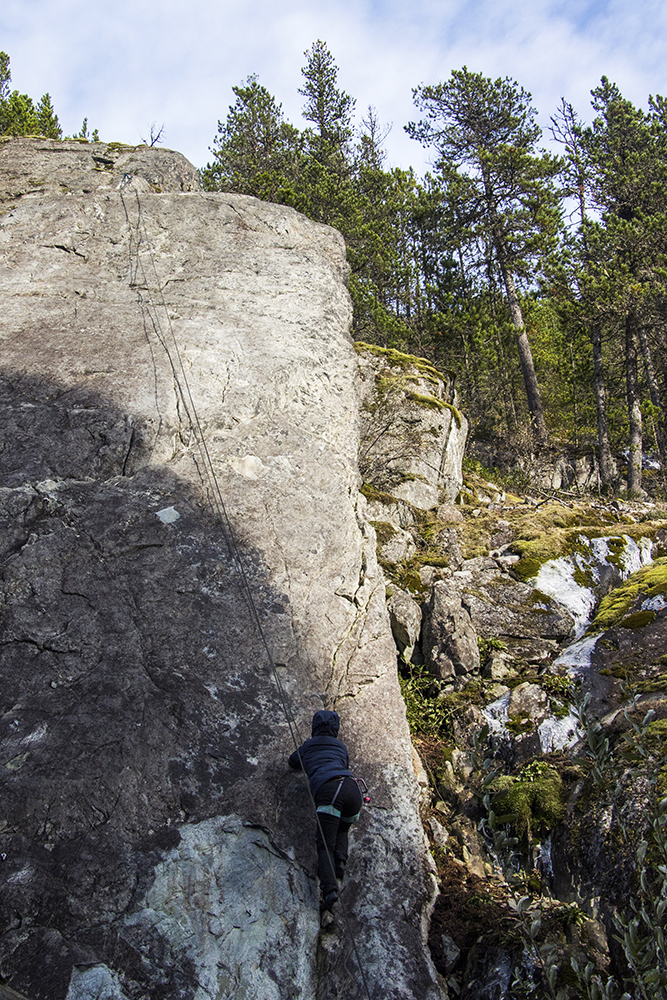 The reward for climbing this route was a few brief moments of sunshine. 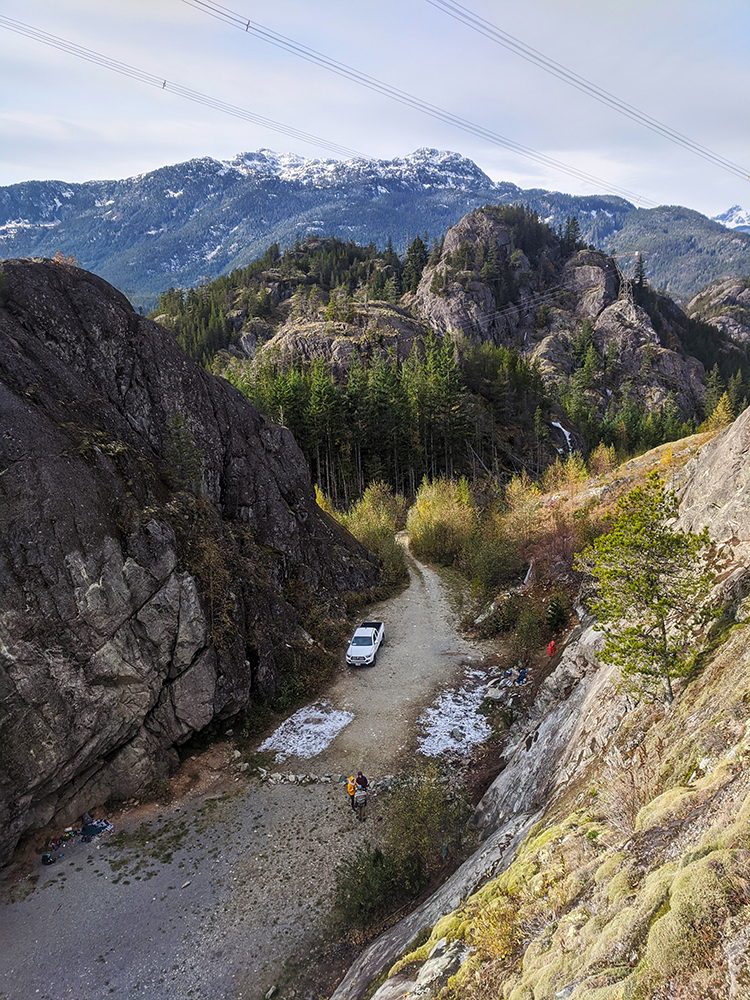 A great view from the top of “Taiga Face.” 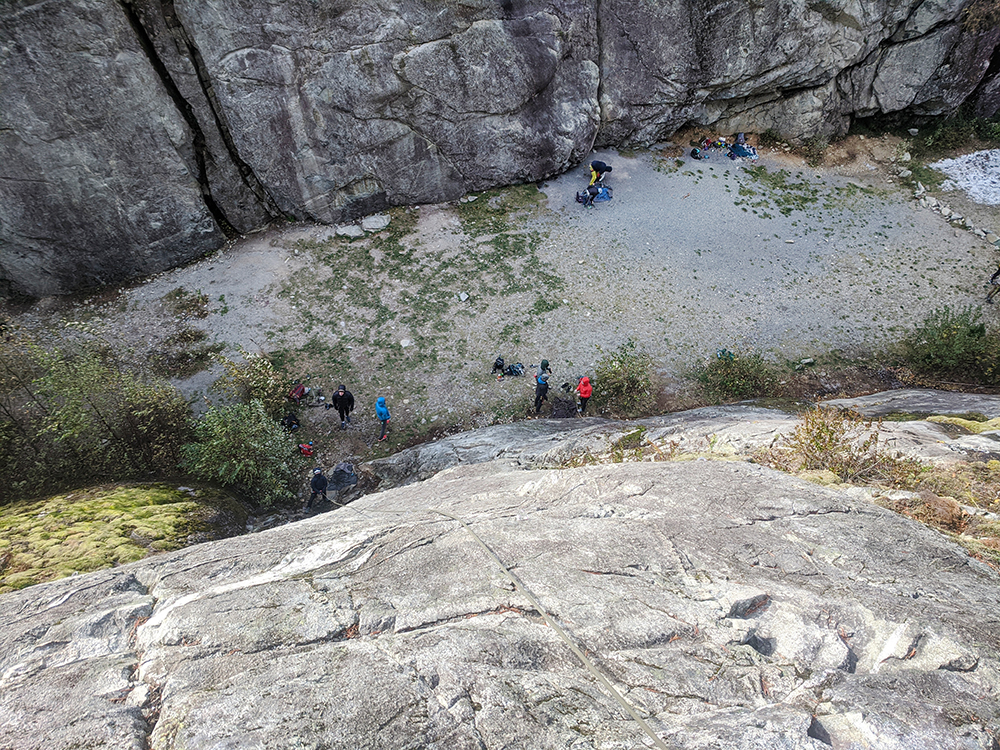 A view down the face. There are a bunch of much harder climbs on the opposite wall. But we had neither the skill nor the motivation to attempt them. Mediocrity prevailed! 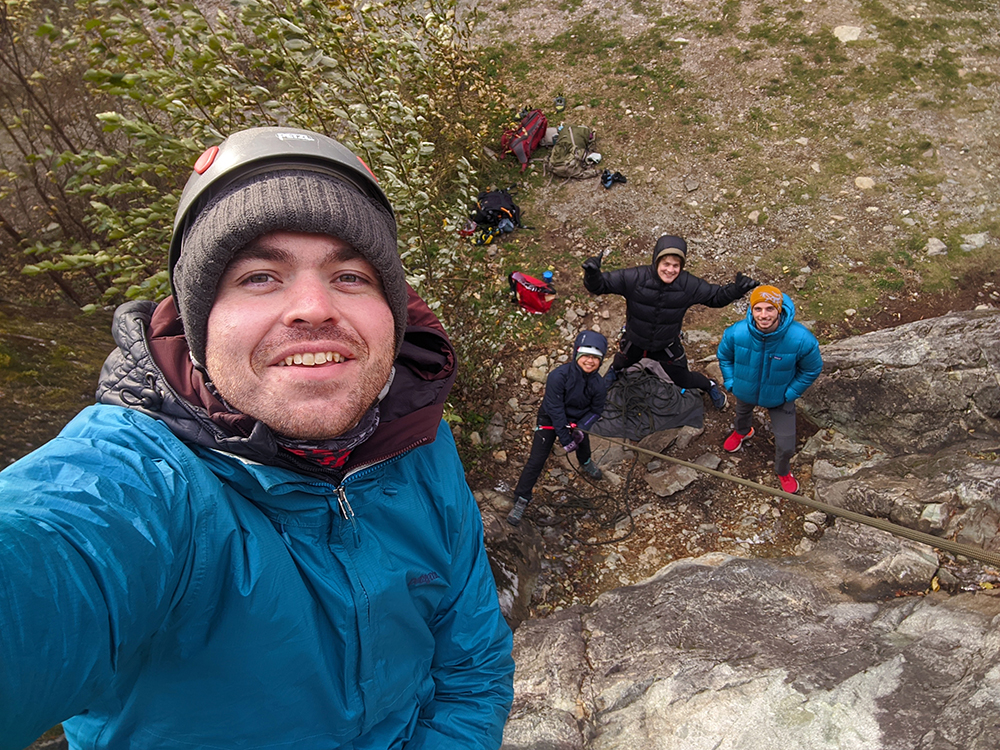 A group selfie on the descent.

Finally, as the afternoon turned to evening and the wind finally died down, the last few easy routes opened up. Giulio was soon able to set up another top rope on the 5.7 “Out in the Street.” Apparently some of the route names are lyrics from the song “Electric Avenue,” which I fear will now be stuck in my head forever. Then we gave 5.8 “Out in the Daytime” a go from the same anchor, with Giulio and Jessica sending it. My foot slipped on the crux, causing a moderately swinging fall which definitely re-injured an abdominal muscle I had pulled the day before in the snow at Golden Ears (another story which will perhaps be told in a trip report someday). We had to call it quits anyway as the sun quickly set on the now mostly climber-less crags. 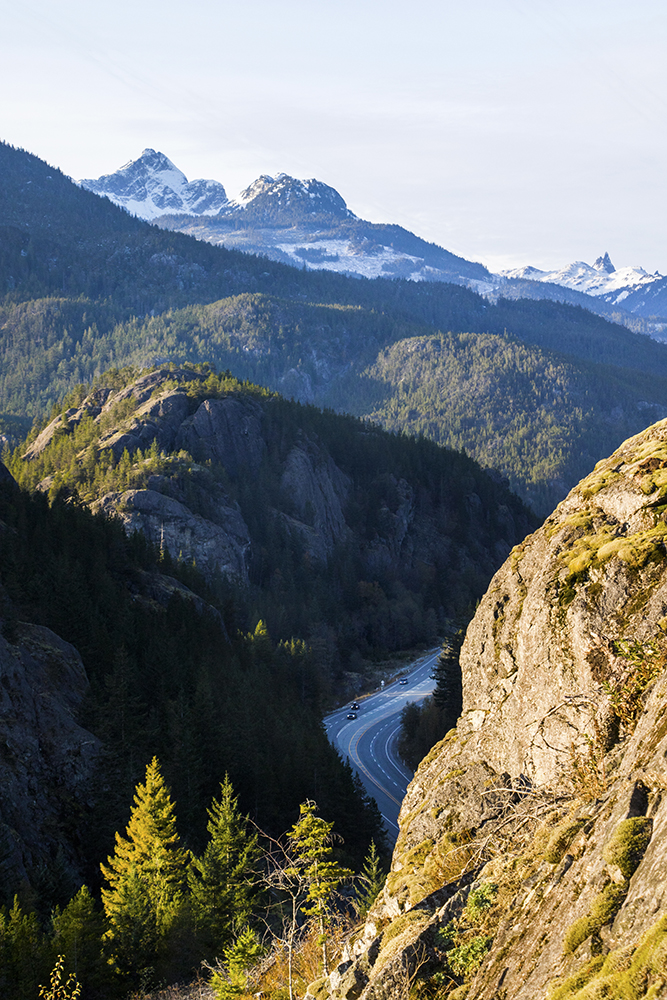 A great view of Sea to Sky from the top of “Out in the Street.” This photo was ‘shopped to remove some annoying powerlines that kinda ruined the scenery. 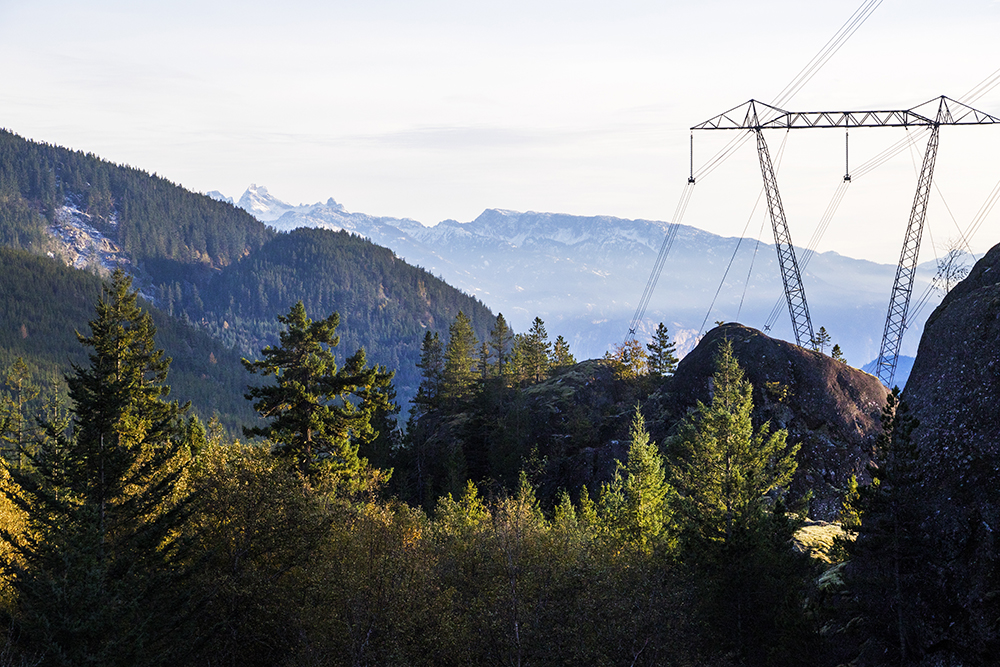 The views were so nice that I clipped in my camera on a quickdraw and carried it up to the top for the photos.

In the end we packed up and headed back to the city, having only climbed 5.8 and lower (mostly lower) the entire day. We all look forward to the next climbing season, when we can continue our relentless pursuit of the ultimate goal: achieving complete and absolute mediocrity. 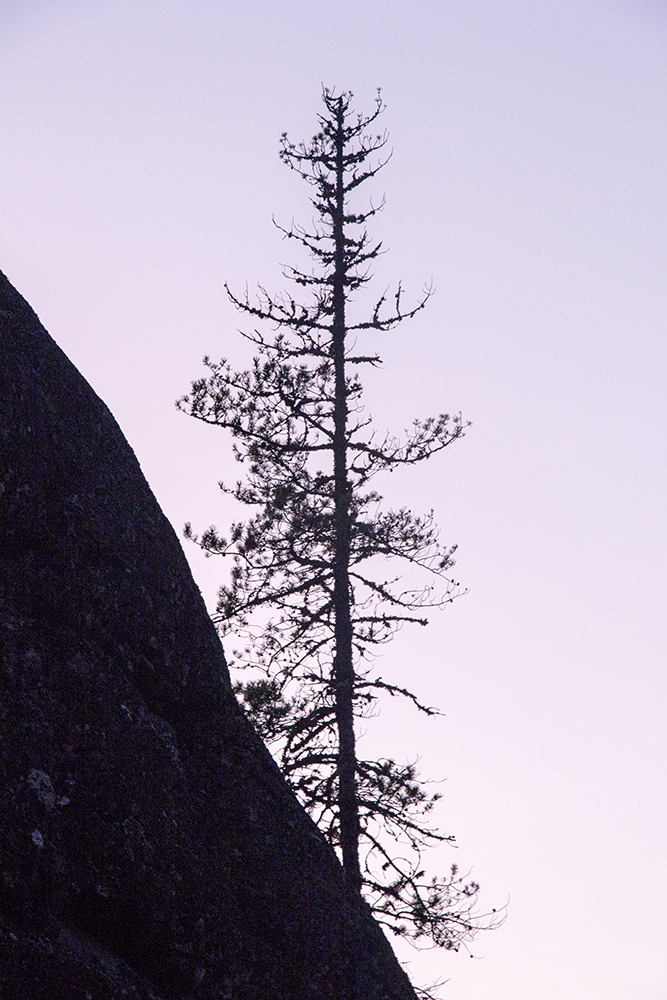 3 Responses to Pushing the Limits of Mediocrity: A Cheakamus Canyon Story