The COVID rules say that we’re not supposed to cross healthcare region boundaries, so the skiing I’ve been doing with my son, Devlin, has all been in the Fraser Health Region, where we live. That cuts out the North Shore and the Sea-to-Sky, but it does allow some fooling around in a bit of Manning Park, up the Chilliwack River, and on the Coquihalla.

When I was a kid, we’d often have summer vacations in BC, where I could look out the back window of the car and see all kinds of places along the Coquihalla that looked like where I wanted to be. My parents were all about seeing attractions that had interpretive signs, though, so we never went to those places.

Box Canyon is one of those places. As we drove by, I could see the cliff walls of the canyon on either side, and it looked the raddest. Since my parents are no longer calling the shots, that’s where Devlin and I went.

We had an uneventful, lazy skin up to Bombtram Mountain ridge. We decided not to summit, since there wasn’t too much light left, and it looked like route-finding down the side of Box Canyon might be hard. 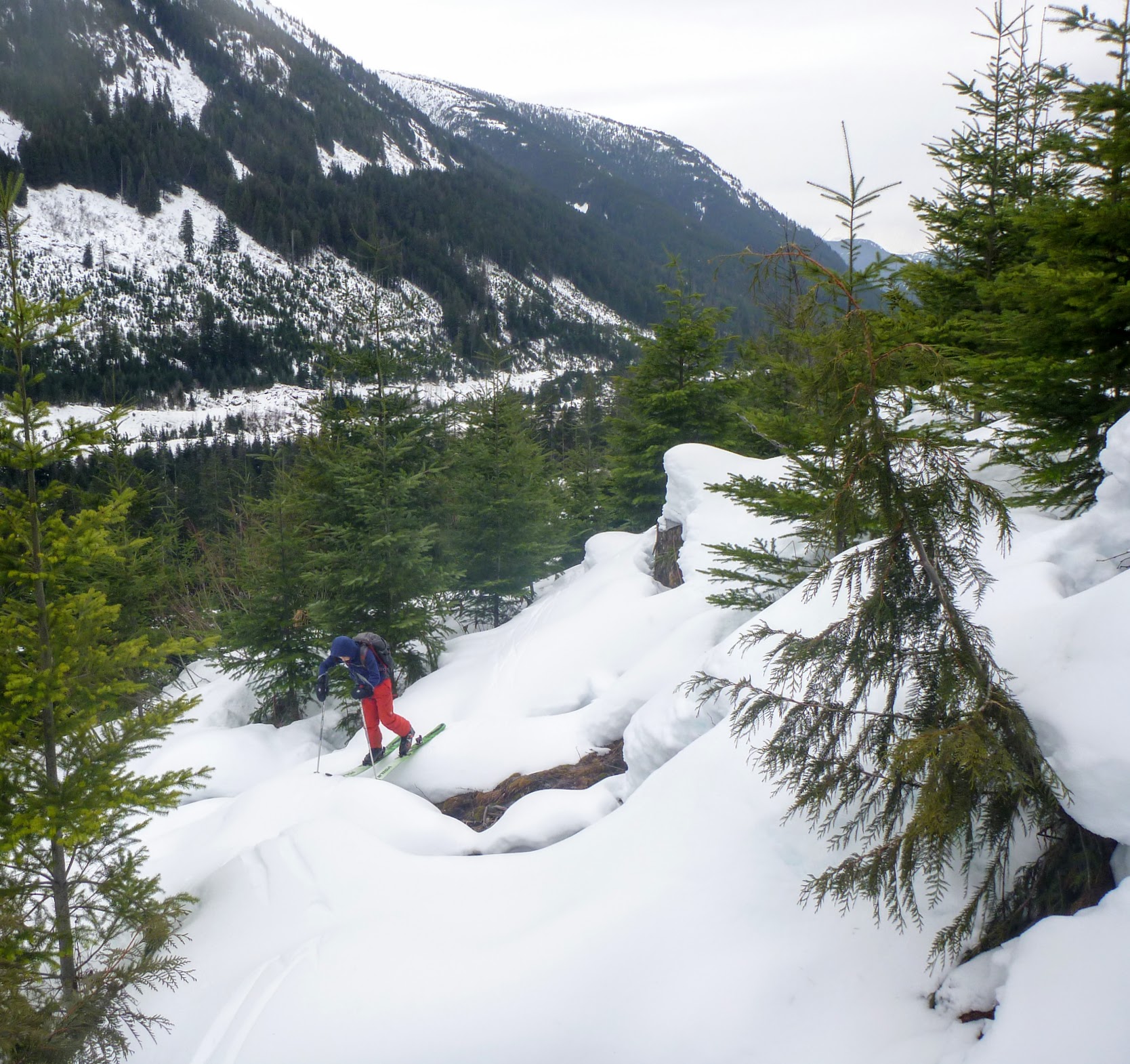 Starting to skin up, lazily 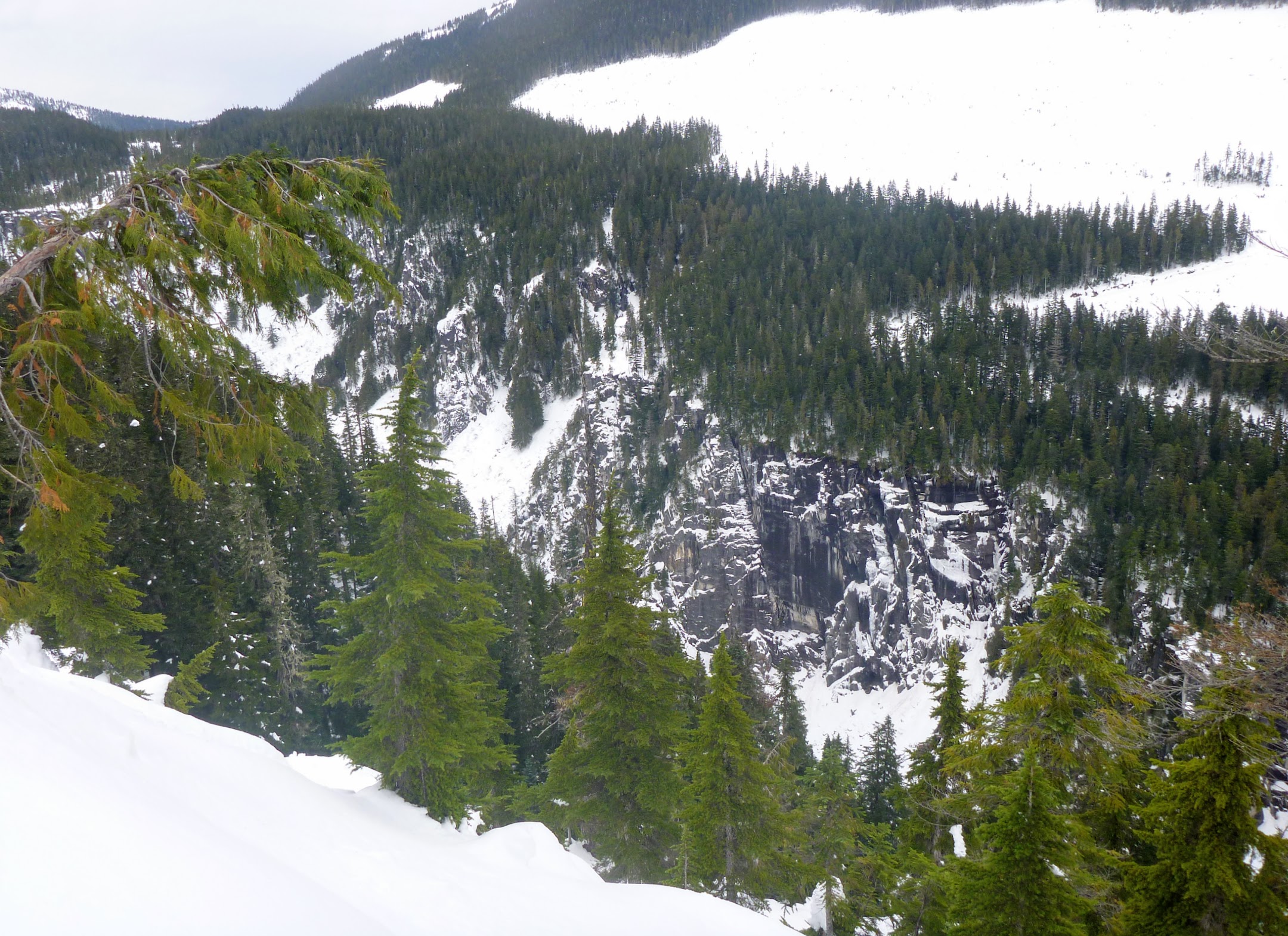 Box Canyon from above

John Baldwin’s Coquihalla Summit map shows a ski line into Box Canyon. There’s this little red arrow curving around a cliff symbol, labelled “exit via narrow gulley.” The arrow is 600 m skier’s right of the end of the canyon and 400 m skier’s left of the closest switchback on the other side of the canyon. 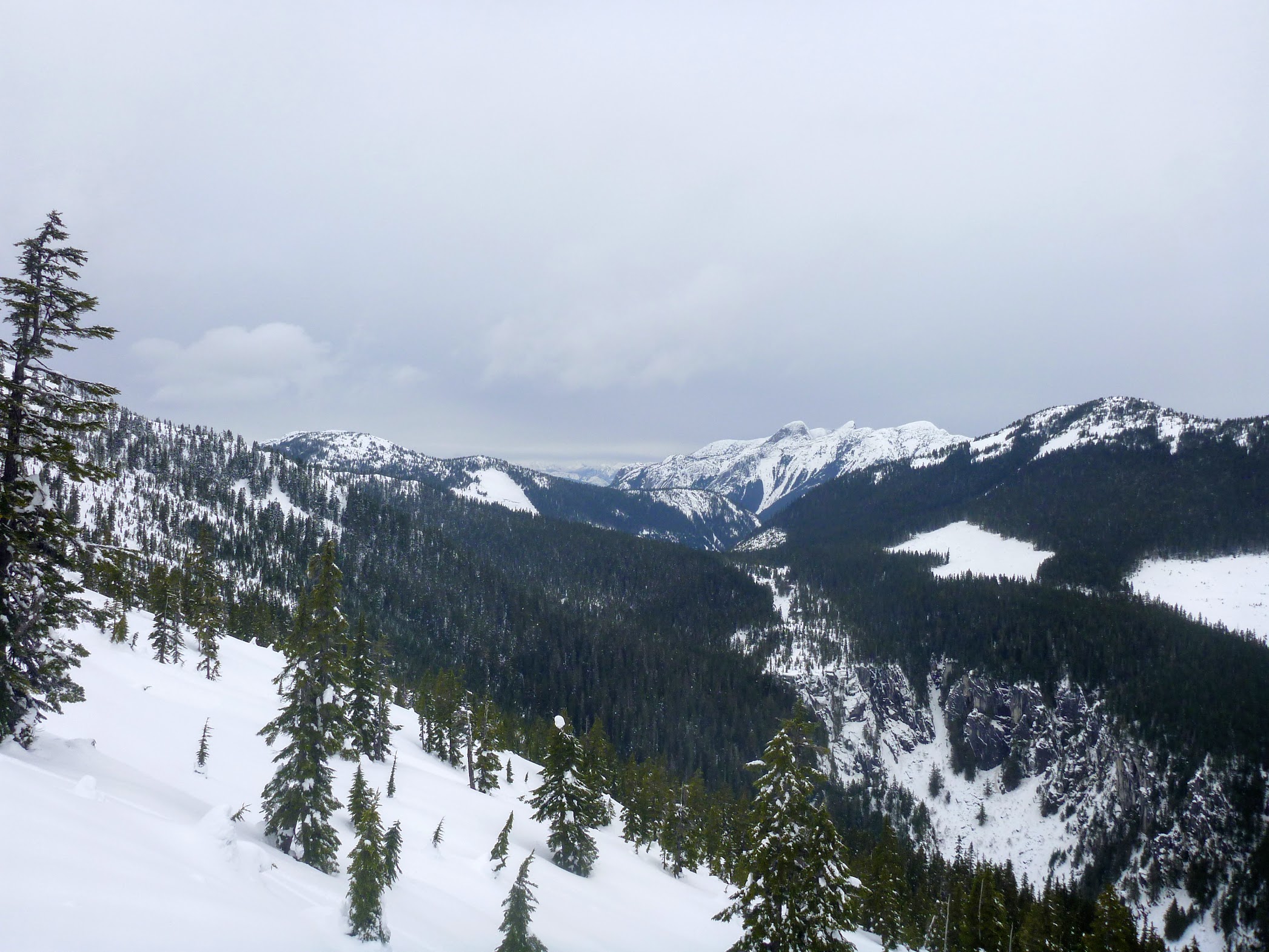 Back of Box Canyon, from about half-way up 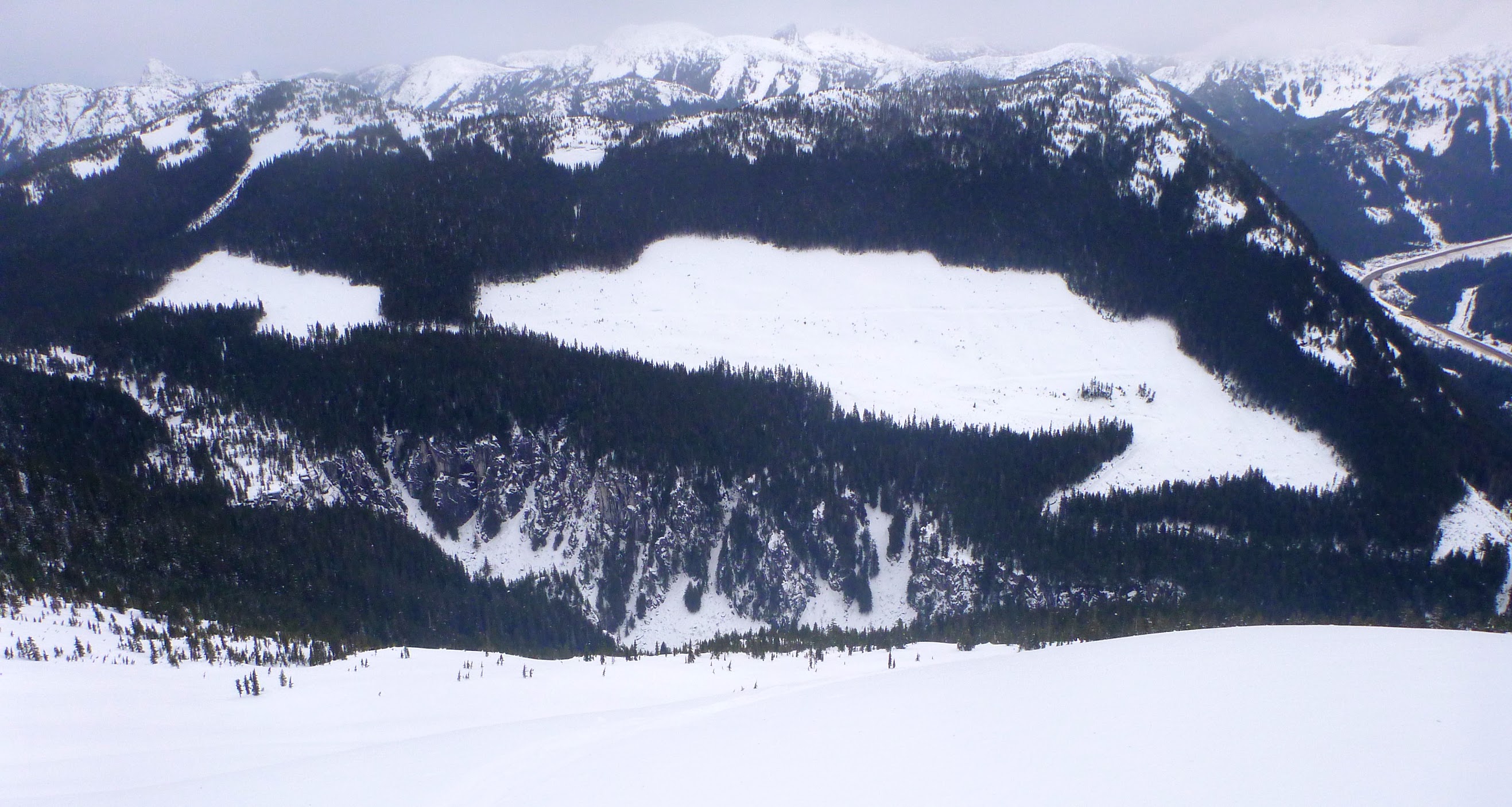 View from the top

In retrospect, I should have taken a look at the Google satellite pictures, determined that the drawing of the logging road on the map was only accurate to within 200 m or so, and tried to figure out which of the dubious-looking gulleys was the one Baldwin meant, but I didn’t.

Anyways, from the ridge we had a good view of the switchback and the end of the canyon, so we could interpolate between them and decide where we were trying to aim. We noted some distinctive benchmarks on the facing side of the canyon and scraped our way down the route labelled Box Top. It was mostly unbreakable rain crust with the occasional patch of wind slab.

As we approached the assumed location of narrow gulley, things started to get steep and well, narrow. This didn’t throw up any warning flags, because when Baldwin says that something is steep or narrow, he means it. 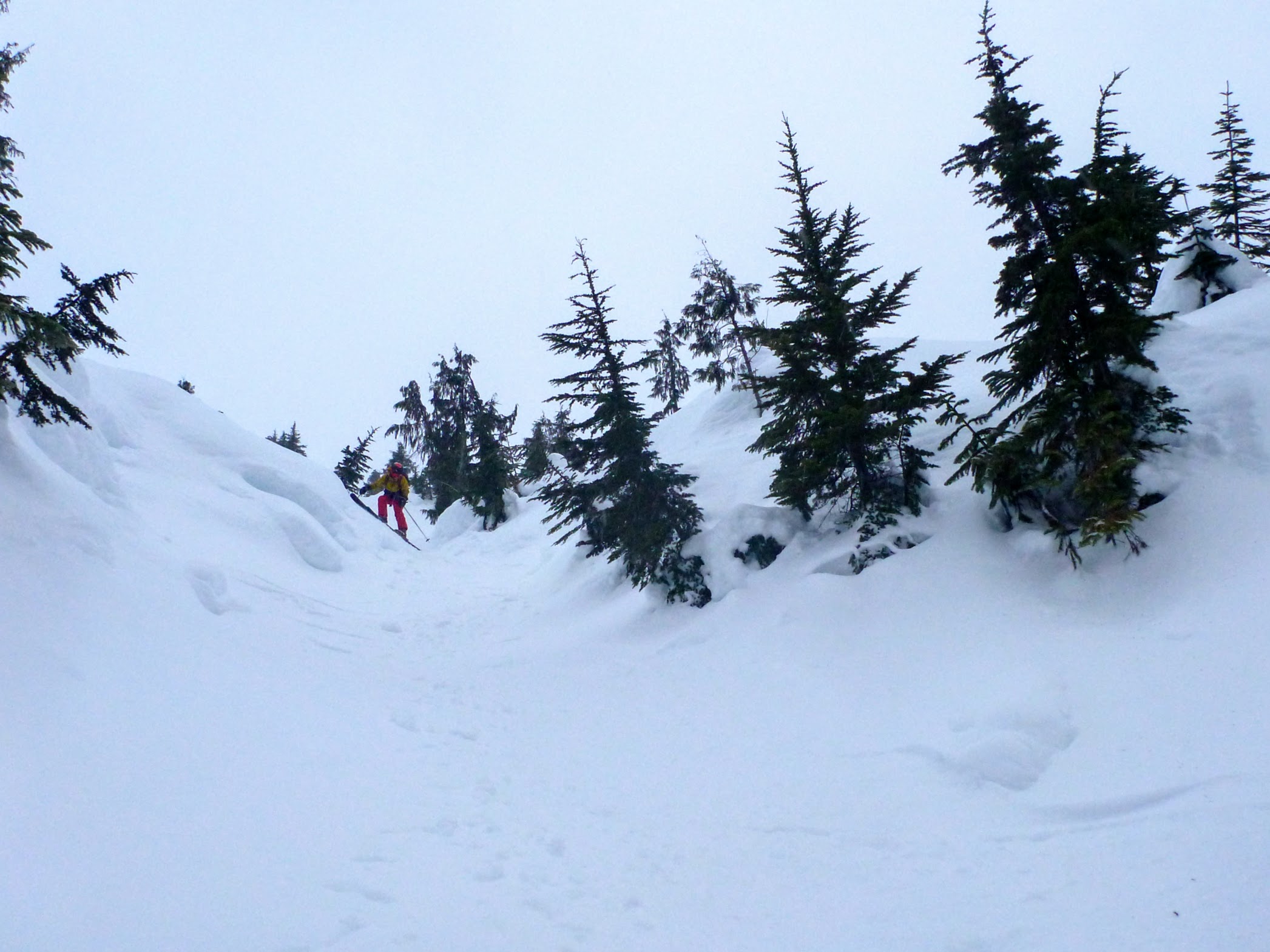 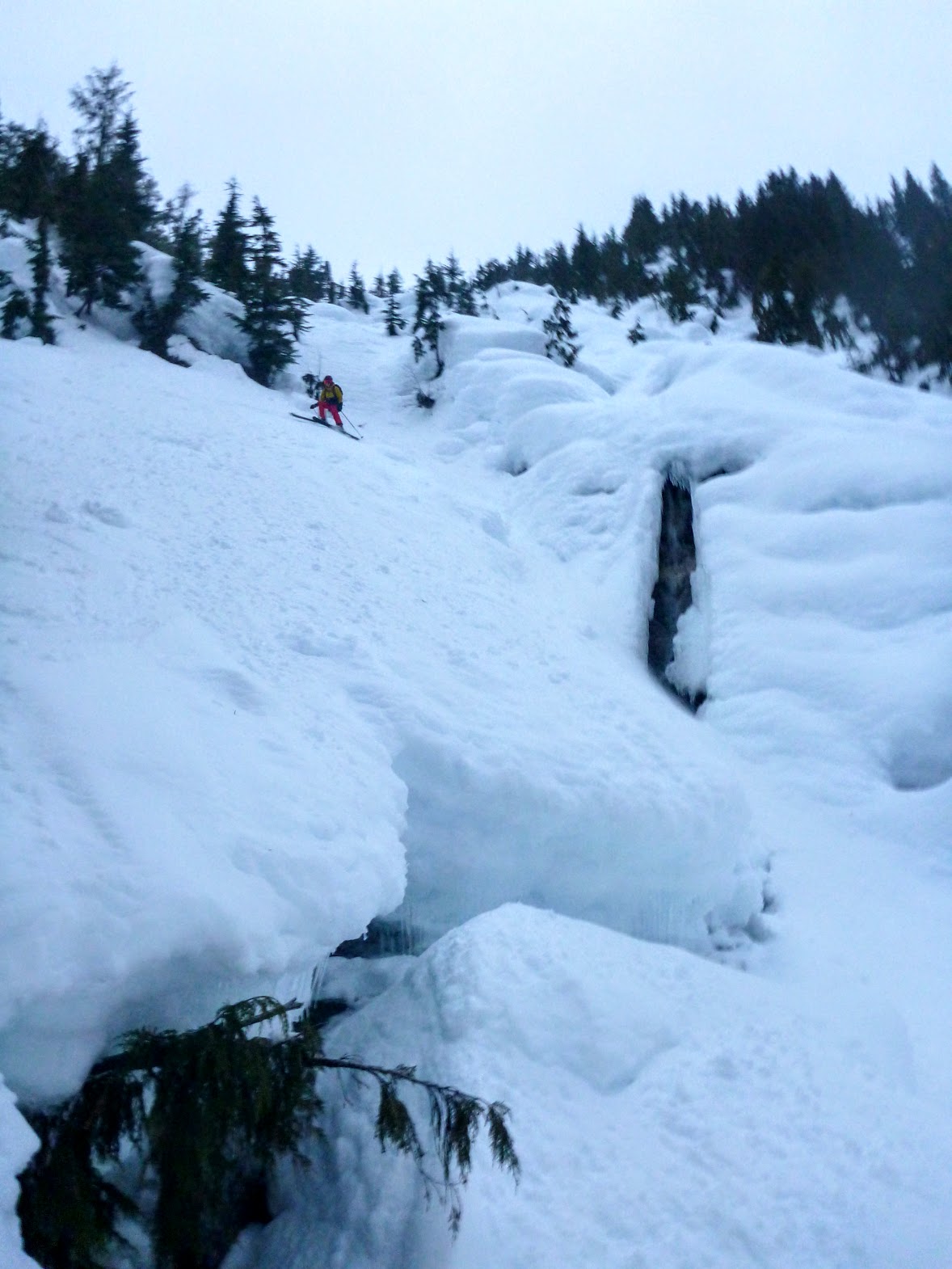 As it was starting to get dusky, we got to the top of this dubious feature that dropped steeply and narrowed before twisting around a corner. We were right across the canyon from the features we were aiming at, though, so we went for it. I skied first, and when I got to where I could see around the corner, it was a mess. The feature narrowed into a tight waterfall on the right and a steep mass of foliage on the left. Maybe this would be skiable if the waterfall area was filled up with avalanche debris. Maybe we were in the wrong narrow gulley. At that point it wasn’t totally clear. 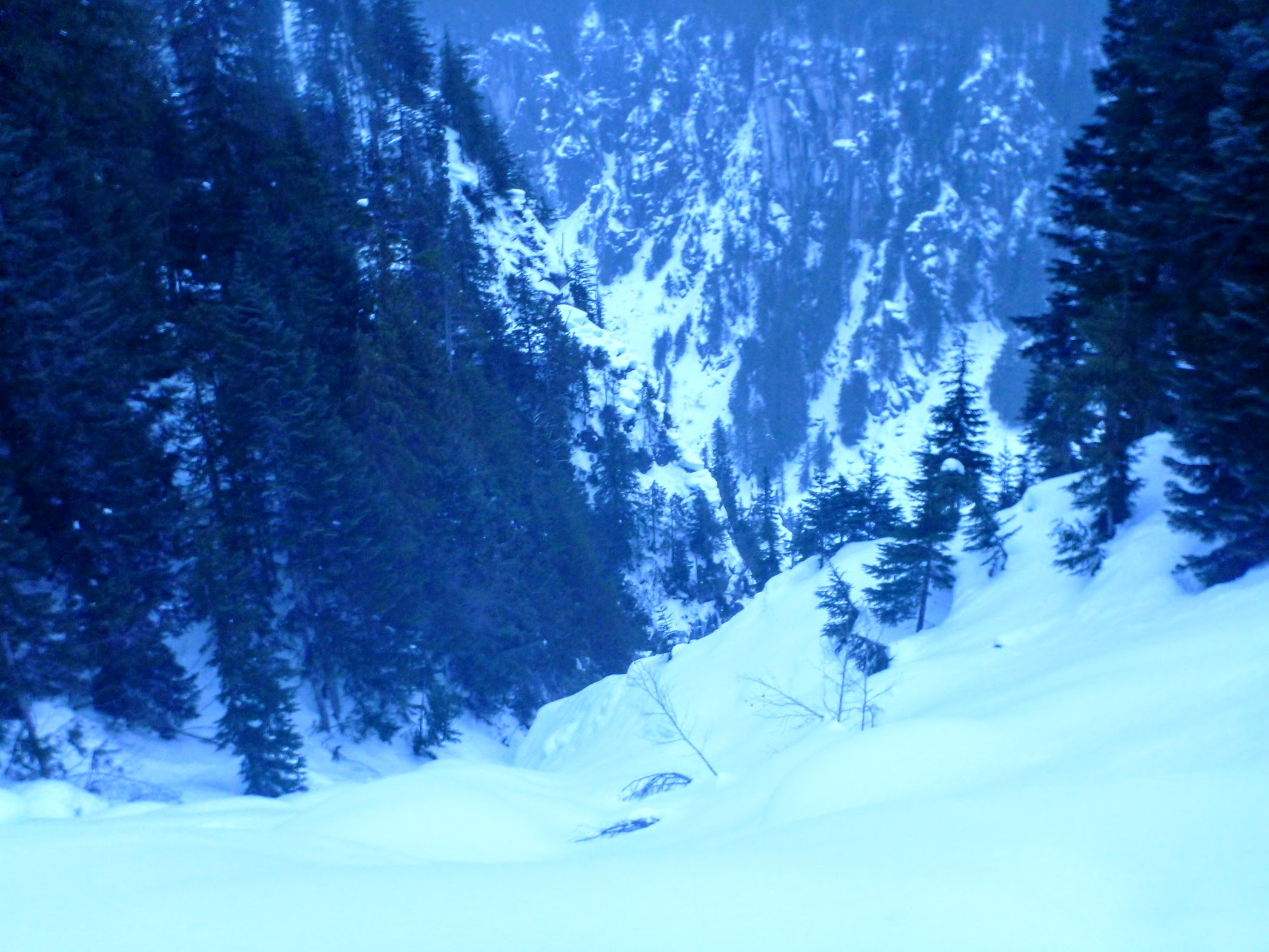 I hummed and hawed about kicking steps back up what I’d just scraped down and the merits of downclimbing the foliage on the left. Eventually I decided the downclimb would go and called for Devlin to join me. We put the skis on my pack, and I started kicking steps down and to skier’s left, which had turned into climber’s right. There was a good crust, which would take a few hard boots to get into, but it would hold my weight. I couldn’t really see too far ahead because of the dense bush and it being a steep convex roll. After I used up half my remaining daylight, I got to a place where it looked like there was probably continuous cedar and alder to the bottom.

I gave it a go, and as it steepened up, the crust under my feet gave way. The skis on my backpack hung up in some branches, and I found myself hanging my pack. The stuff that was holding me was sufficiently floppy that they flexed back a couple feet, leaving me in a situation where I could touch the wall and paw at it uselessly but not really climb at all.

There was a little ledge a few metres above us that would be bivyable if need be, so I told Devlin to just kick steps up to it and wait. There was really nothing anyone who didn’t have a rope could have done, so just getting out of harm’s way was the best course of action.

There was a layer of ice on most of the branches, so I was having a tough time getting purchase on anything.

Then it got dark. The headlamps were in my pack, so there was nothing I could do to get them out.

After some contemplation, I got my pole flipped over a branch, such that the wrist strap was around the branch and I could grab the pole from under the branch, which gave me something I could work with. I was able to get a foot up and hook a U-shaped trunk and use the other pole to negotiate the two pairs of skis sticking out of my pack through the web of branches.

Once I was on the ledge with Devlin, I dug out the headlamps and took a look. I couldn’t see much of anything. Devlin insisted that before it got dark, he could see a line that would go. We talked about how if we boot-packed up, it’d be really late when we got home, but if we did something stupider, we wouldn’t get home. He was sure that the line he saw would go, and therefore going down wouldn’t qualify as stupider. I was skeptical, but I wedged the pack on the ledge, gave Devlin the InReach and phone, and went for a recce. 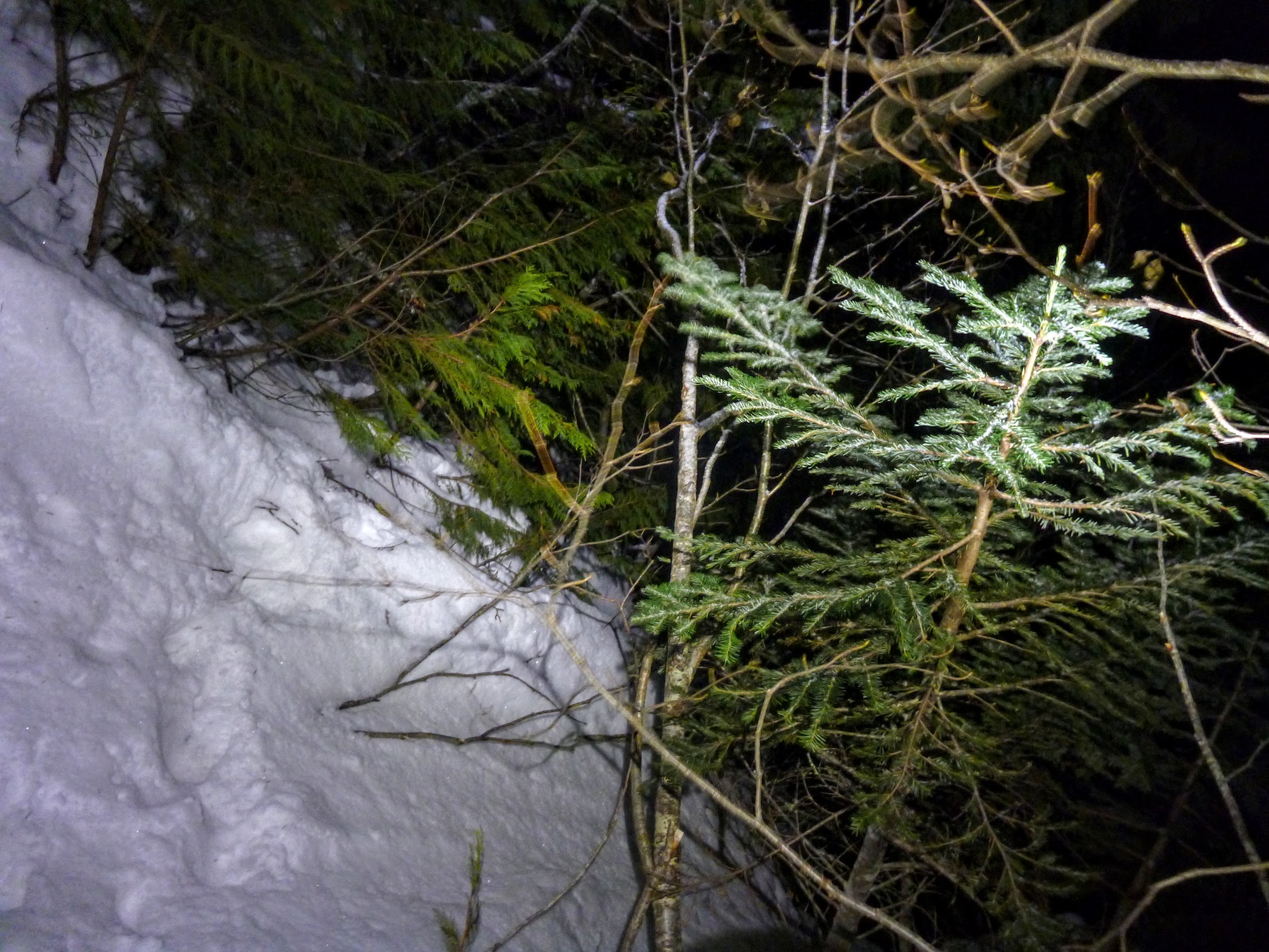 Are you sure that will go?

For most of the way, there was continuous vegetation with enough ice-free handholds that it felt reasonable. There was one patch where the only thing to grab was one totally iced-over cedar branch. I ended up chewing enough ice off it to solidly place one hand, and that was enough. After getting around that, I could see a continuous path to the bottom, so I went back, I grabbed my pack, and we both slithered down. 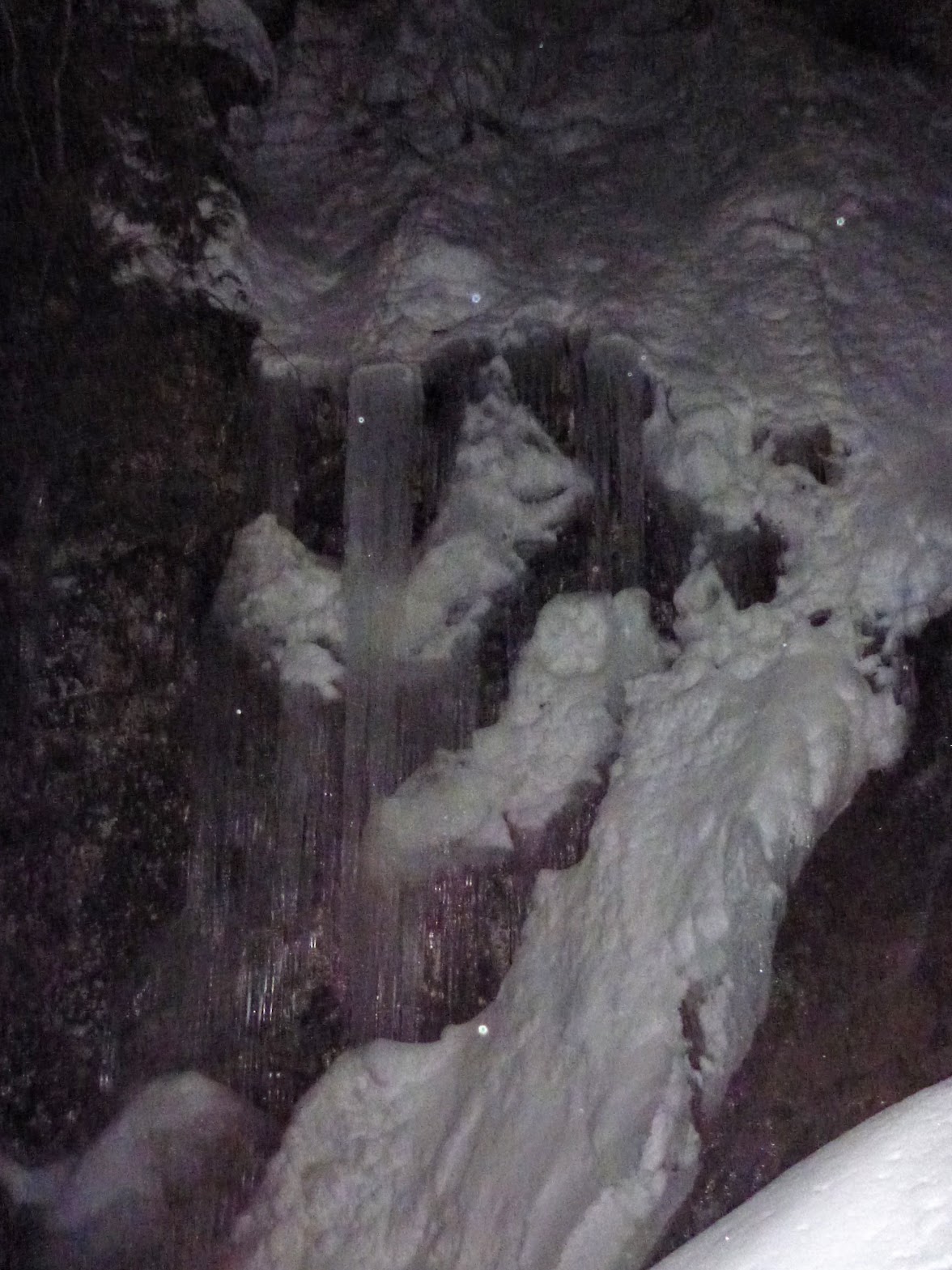 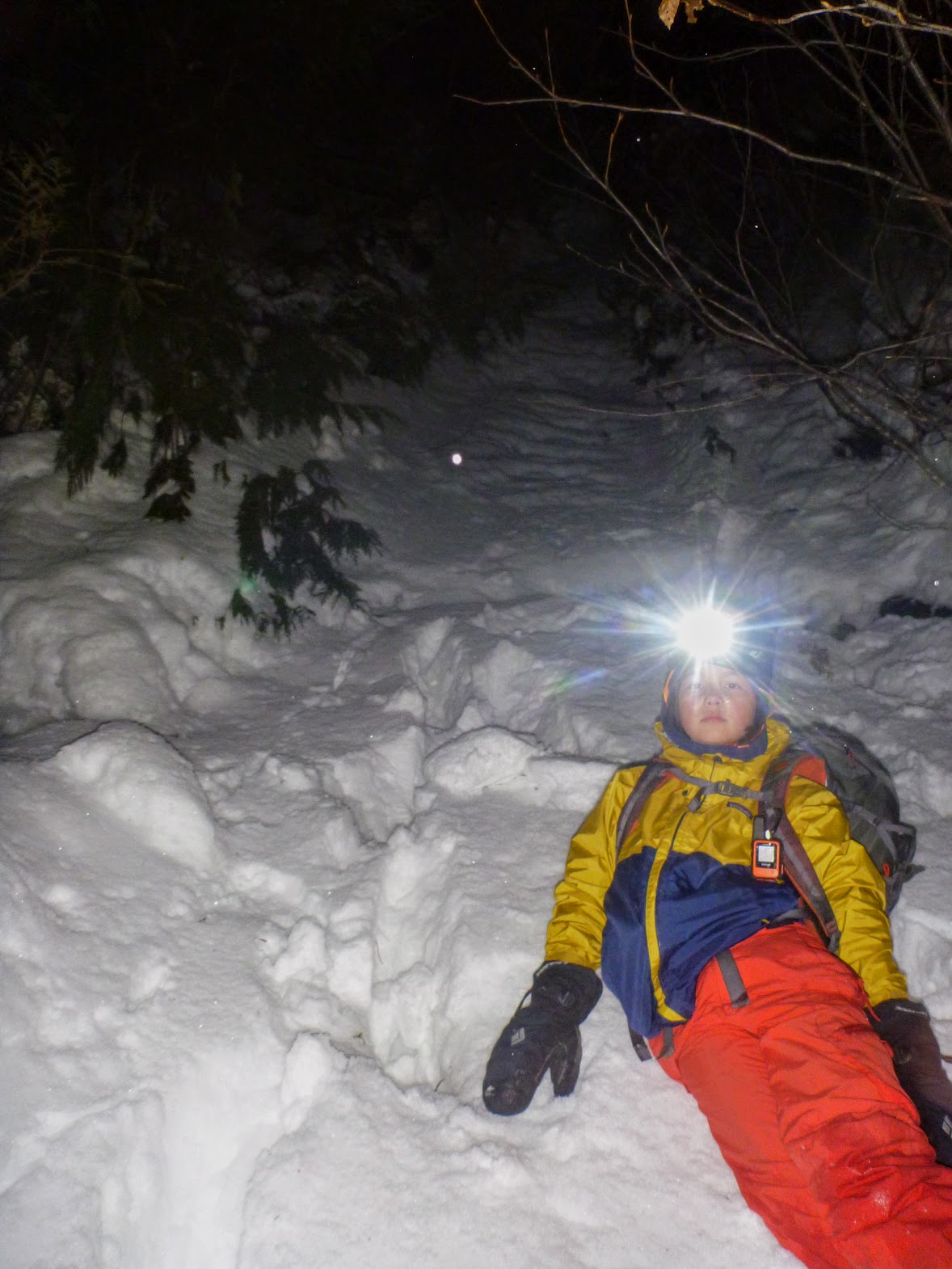 From the bottom of the waterfall we were able to ski down avalanche debris into Box Canyon itself. I could faintly see the canyon walls, enough to know that they’d be super-impressive if there was enough light, but now the only thing I could see for sure is that there wasn’t enough snow to really cover the canyon bottom. There was lots of rock-to-rock billy-goating, and even more sidestepping and alder. It would have been a delight with another couple of metres of powder on top of it, but that’s not what we had. Still, it didn’t really matter. We were escaping. 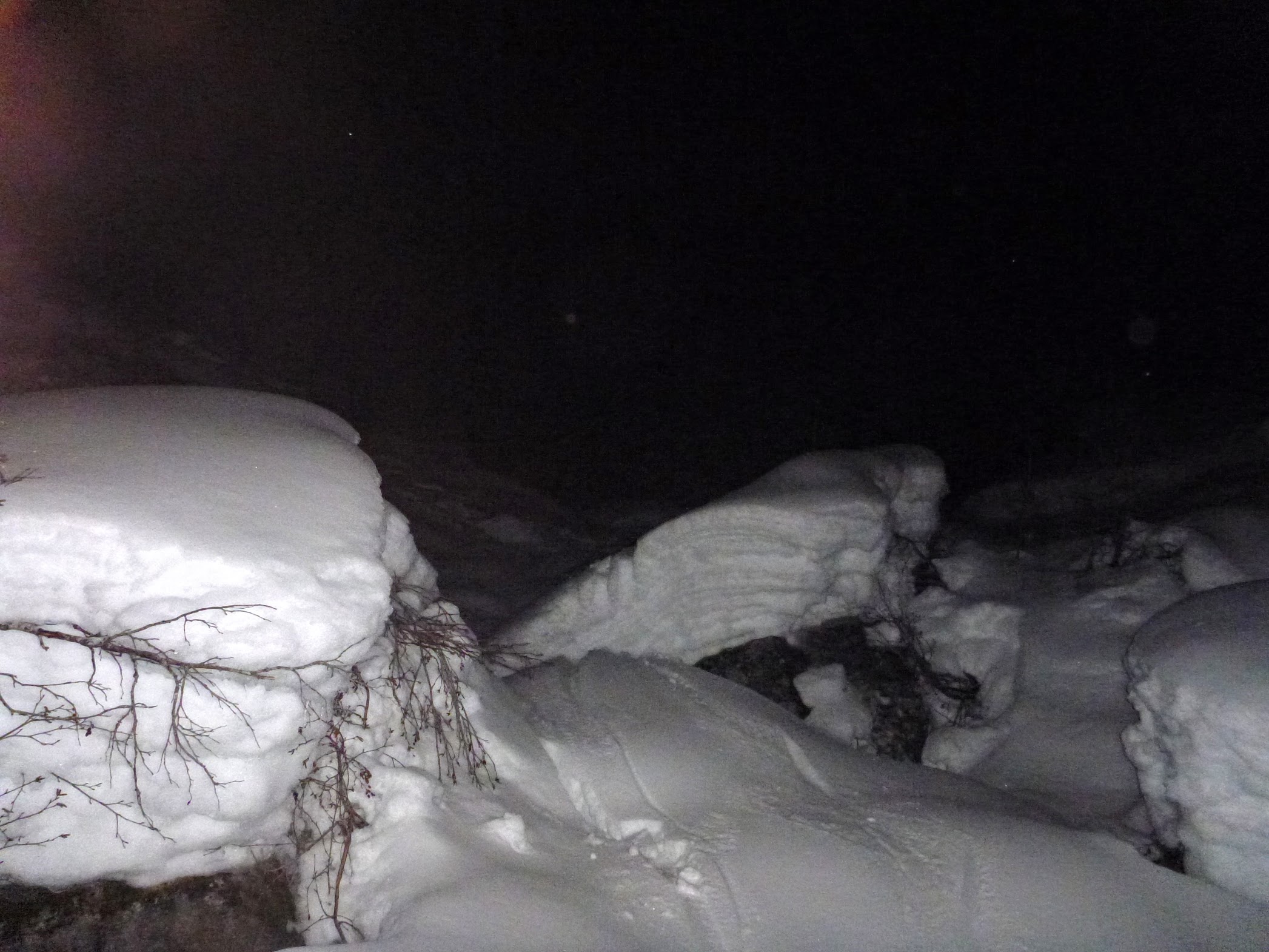 After a bout of terrible skiing, we met up with snowboard tracks that must have exited via the correct narrow gully. Then we had some more terrible skiing but got out intact. 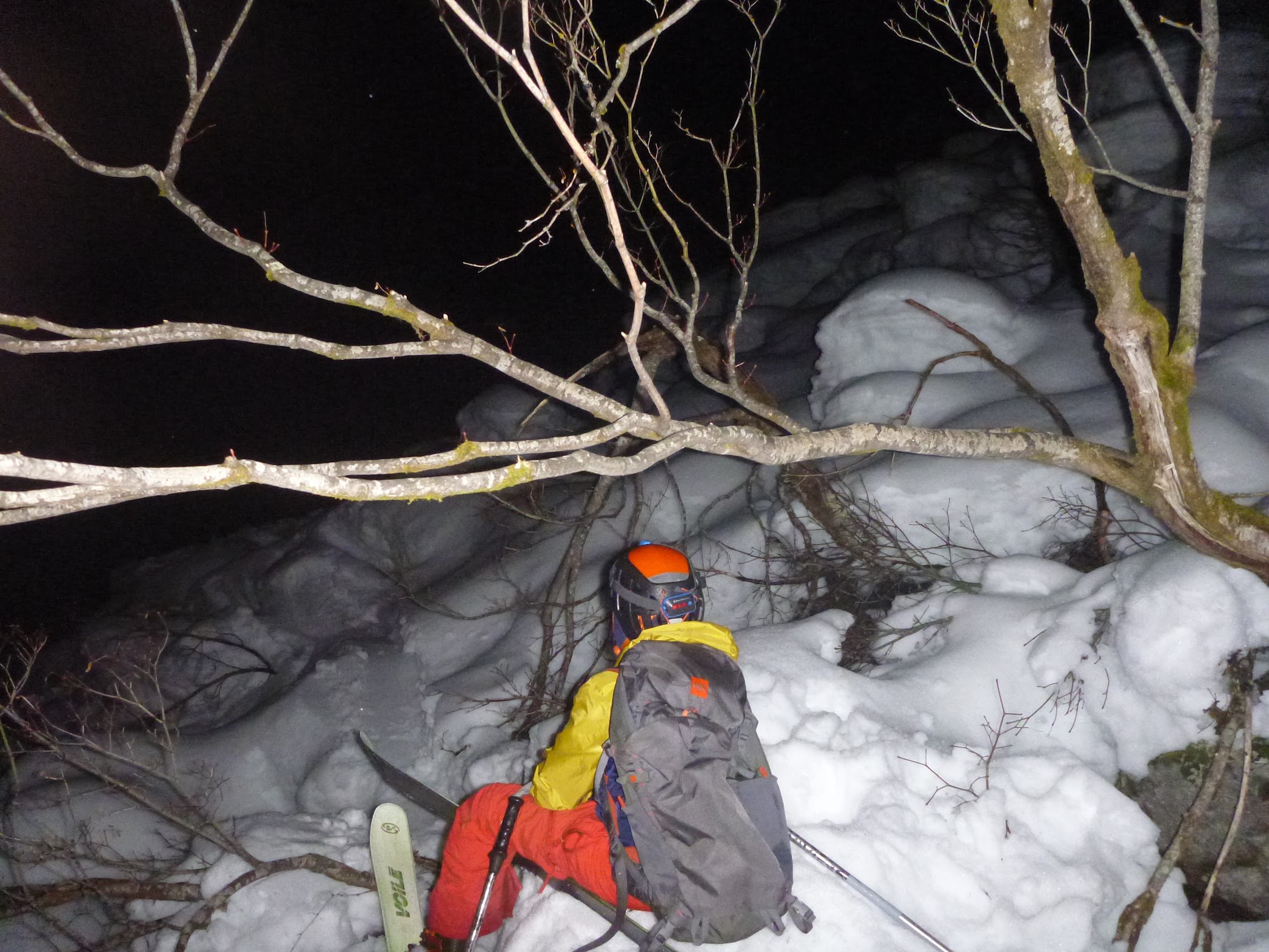 Taking a rest where we met the snowboard tracks

I was motivated to do some closer looking at the Baldwin map and Google images after the fiasco, and it’s pretty clear that the depiction of the logging road and the “exit by narrow gulley” on Baldwin map are both fairly impressionistic. The switchback we were using as a reference point is depicted about 150 m west of where it really is. It’s totally on me for not checking ahead of time, since the Baldwin map is based on the ancient NTS map, where elevations are in feet.

Edit: Legendary VOCer of my generation, Rich So, pointed out that there is a new version of the Baldwin map, and it makes everything clear. The logging road looks right, the feature we went down is clear, and where we should have gone is also clear. 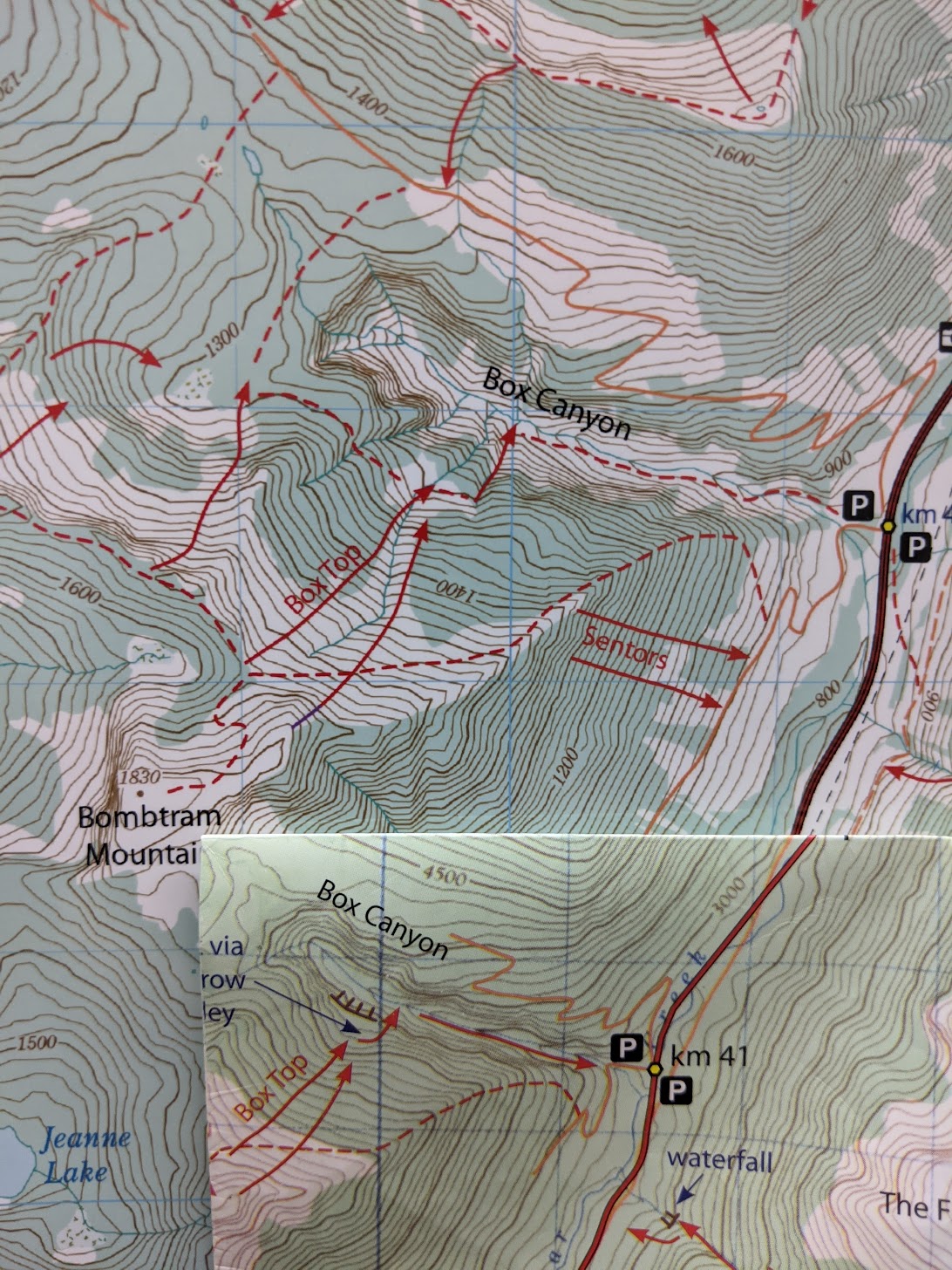 Old and new map comparison (photo by Rich So)