Near the Coquihalla summit, the highway goes over Dry Gulch. It’s a striking view from the road, as the bridge goes high above the angular gulch, which has straight, angle-of-repose slopes along both sides for its entire length, except for small cliff bands at the top.

There’s no description of Dry Gulch in the Baldwin guide, and I think the reasons are pretty clear. It’s south-facing, so both sides are looking at full sun for the whole day, and it’s so steep-walled that it wouldn’t get wind, even when it’s blowing elsewhere. The unbroken slopes are asking for avalanches, and the top, where it’s cliffy, doesn’t hold a lot of snow, so it probably wouldn’t work as a spring descent on corn snow either.

Despite it being almost guaranteed to have terrible snow, it was a place I’ve always wanted to be, ever since I was a kid. Avalanche conditions were all green, so it was time for Dry Gulch.

My son, Devlin, and I parked at Public Washroom Northbound, as Google Maps titles it. It’s between Falls Lake and Britton Creek. We got dressed and scampered across half the highway, to the boulevard, put on skis to get across, then took them off and crossed the other half of the highway to end up at Public Washroom Southbound.

The astute observer might have wondered why we didn’t just drive a bit further, turn around at the Britton Creek overpass, and park at Public Washroom Southbound, but that’s only because they wouldn’t have anticipated how rad this trip was going to be.

We climbed up the bank behind Public Washroom Southbound and got fumigated by the vent stack from the cesspool. There was a skin track from behind the washroom to where the animal control fence had been snipped a bit to the south, and it led up to near the top of the Coquihalla Lakes Ridge. The normal procedure is to skin up to where it gets up-and-downy near the top, and then ski back to Public Washroom Southbound, but there’s no summit involved in that, and certainly no Dry Gulch. View From the Summit

We summitted and followed the ridge for about 1.5 km to get to the bluffs above Dry Gulch. It was a glorious place, with a glorious view. 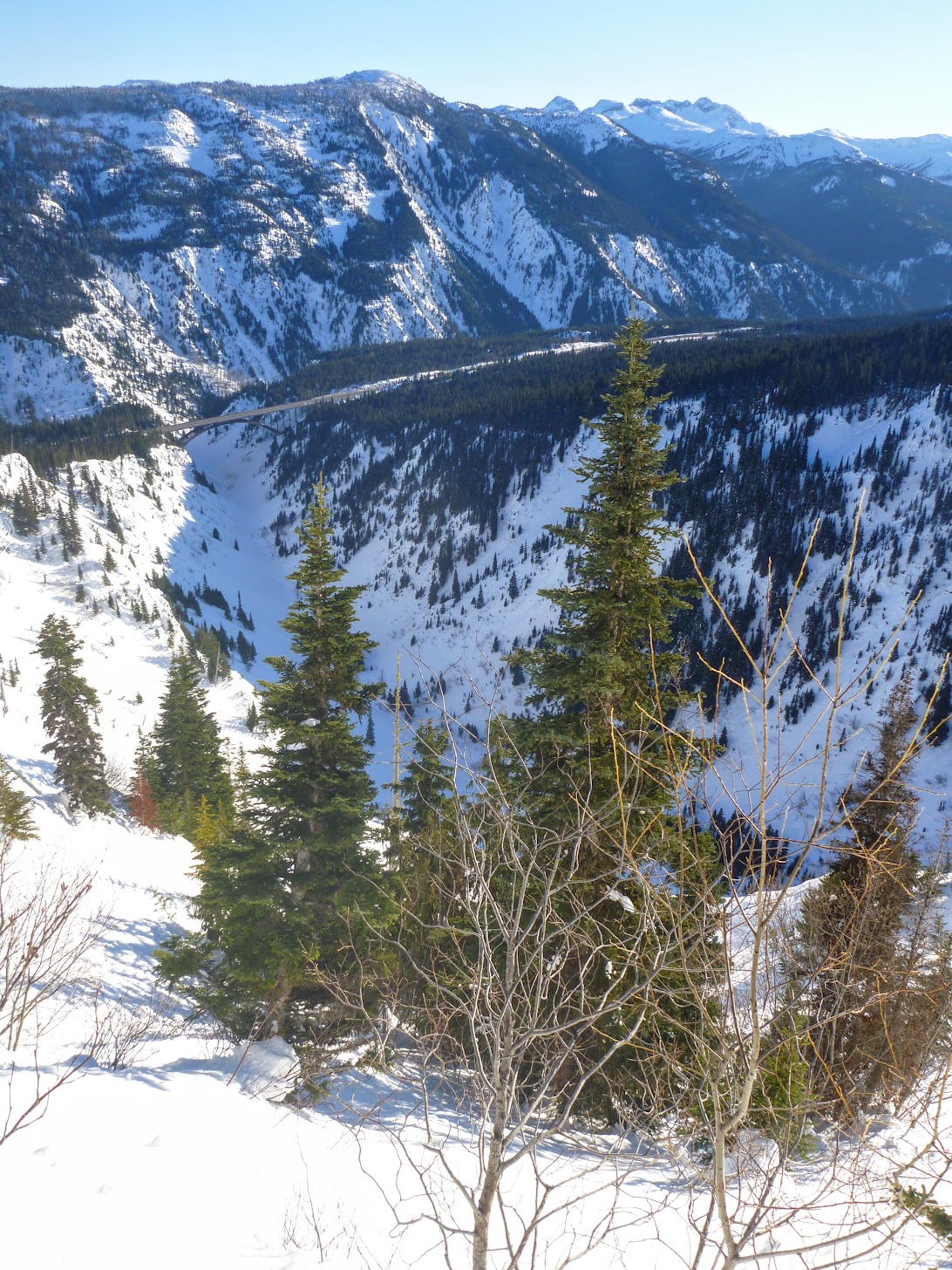 Negotiating the cliff band went pretty smoothly, putting us on a steep slope with a thick, breakable crust above a void-filled alder layer. It was kind of like skiing down a steep, champagne-powder slope, where the snow comes with you, except here it was tons of crust rattling down. 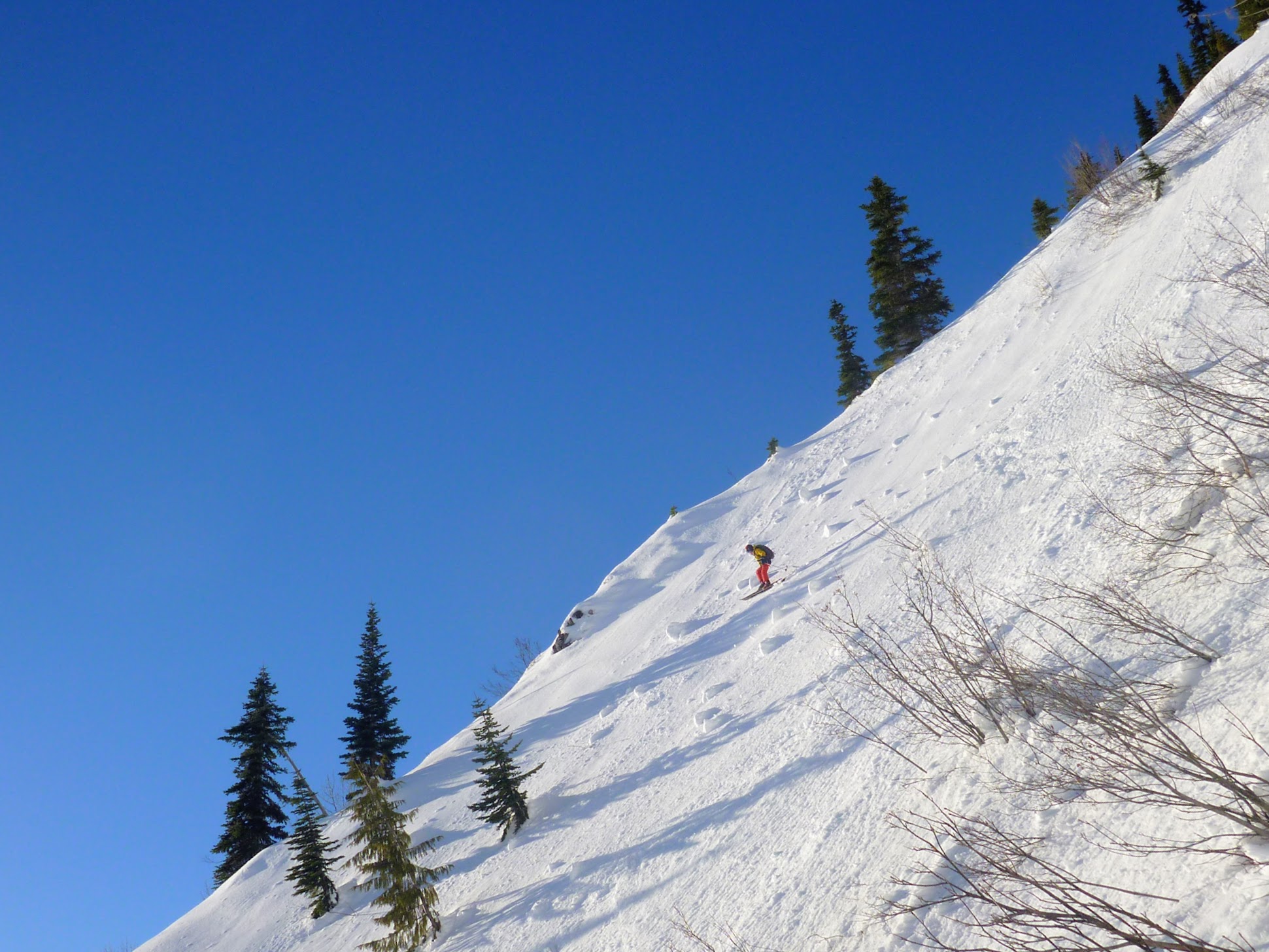 We encountered a variety of snow types on the way down:

Overall, it was exciting skiing. 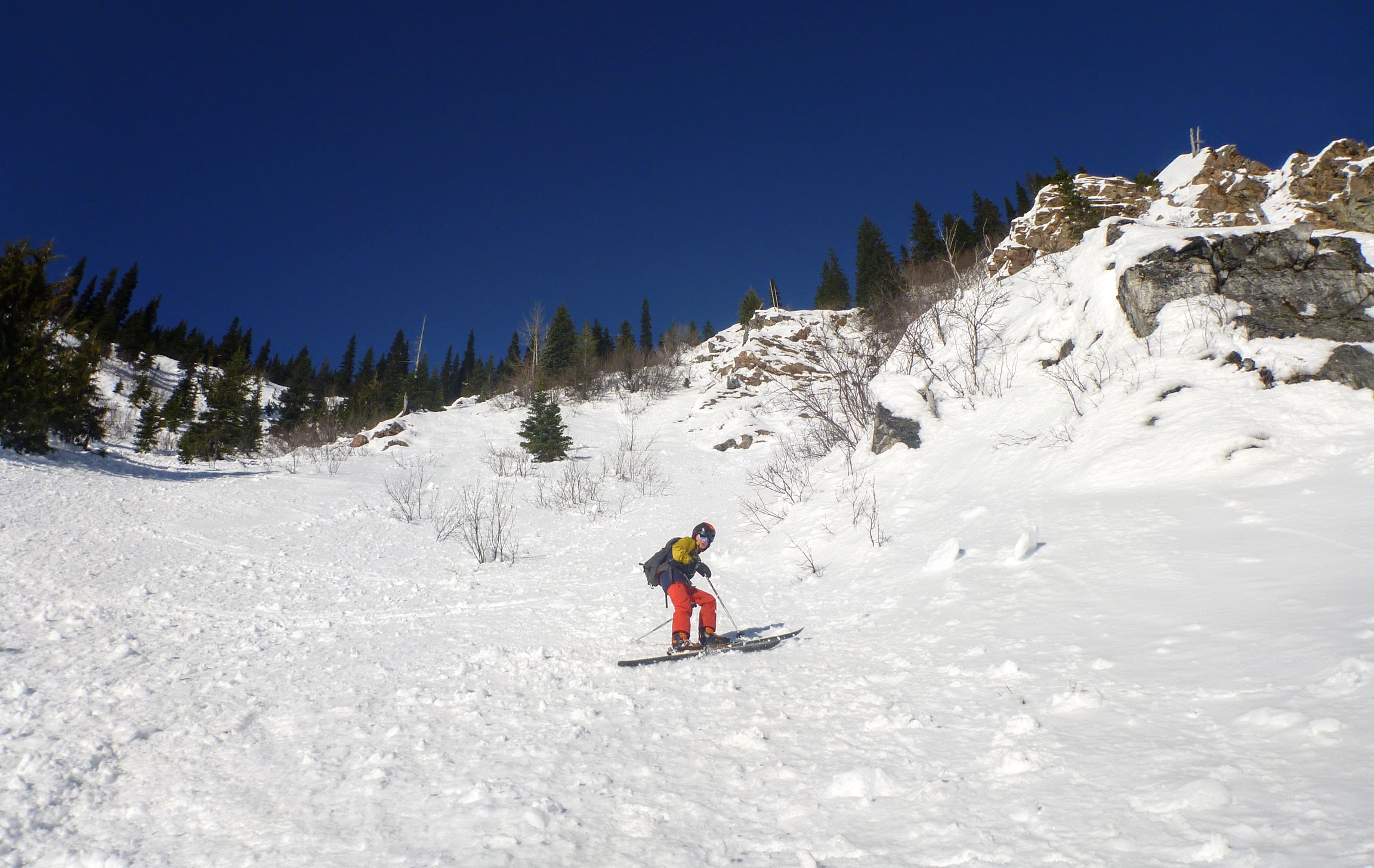 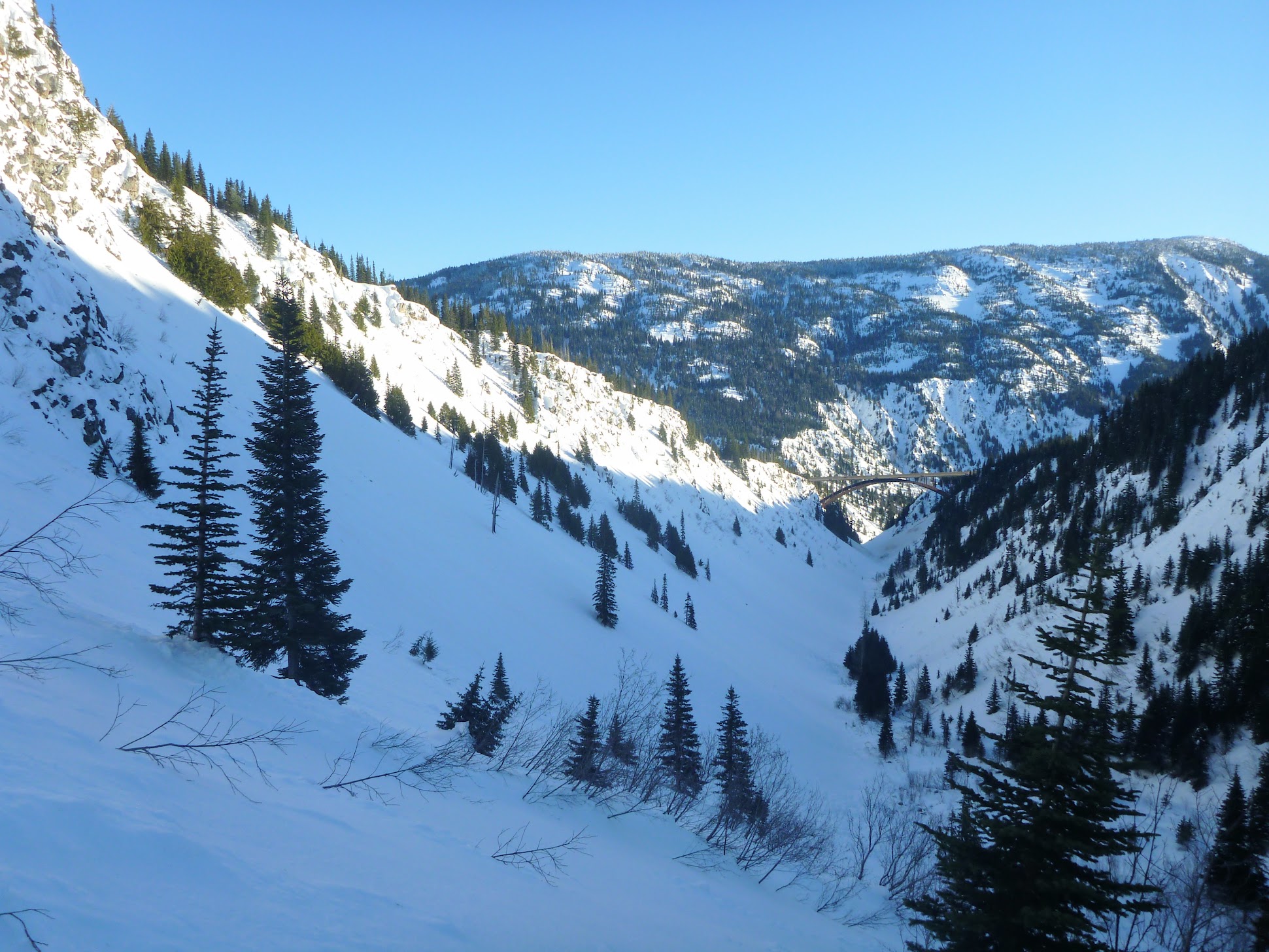 Once we got to the bottom of the gulch, there were rocks, ranging from about hockey puck sized to football sized, lying on top of the crust. There weren’t nearly enough to be a navigational problem, but I was impressed that they’d managed to get to the bottom from the cliff bands 300 m above. They would have had to have bounced down the crust without breaking through and plinkoed through the avalanche debris without getting stuck. 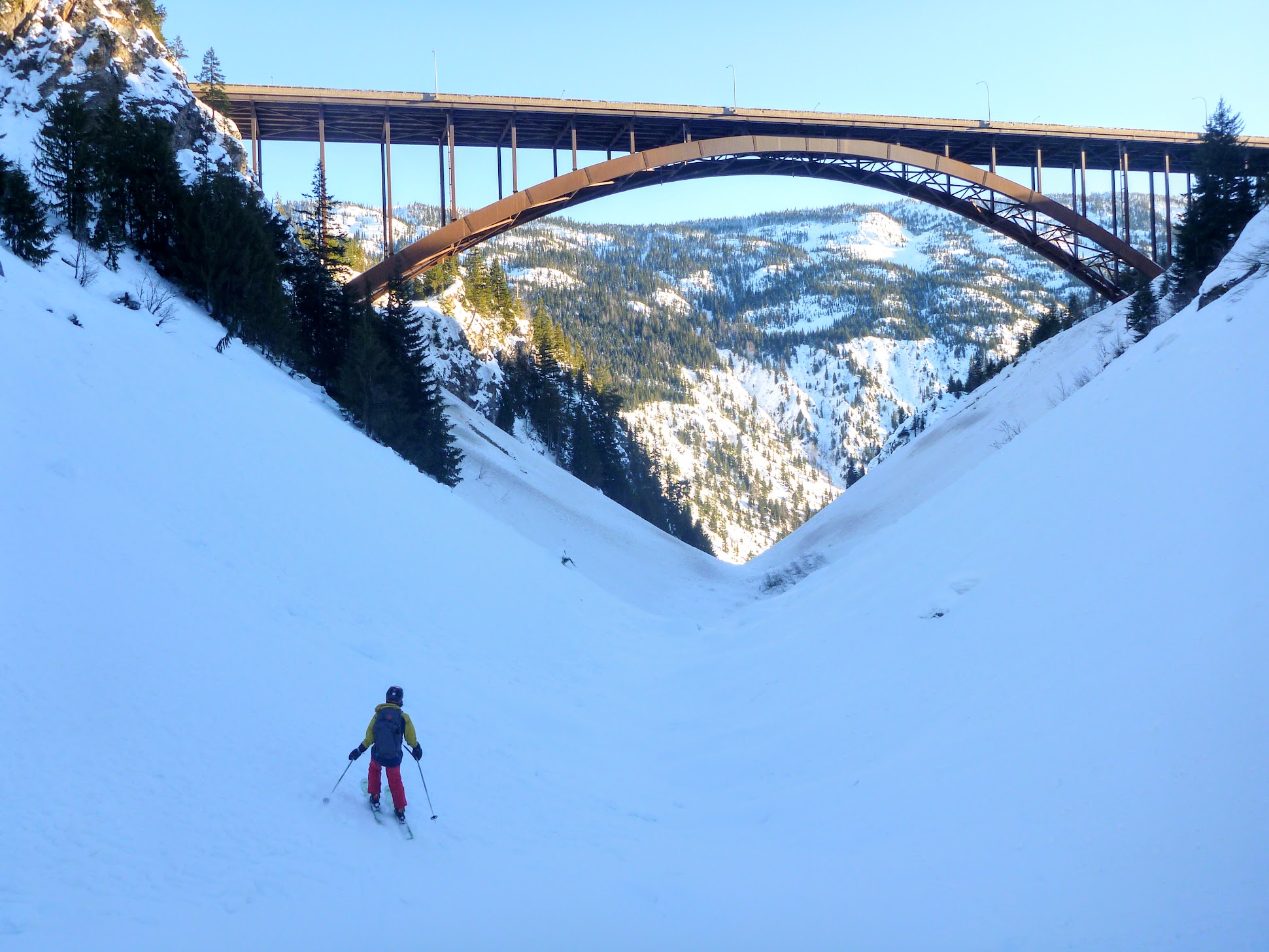 The Coquihalla passes high enough over Dry Gulch that there’s no snow-free bit underneath the highway; you just ski straight under the bridge and out the other side. 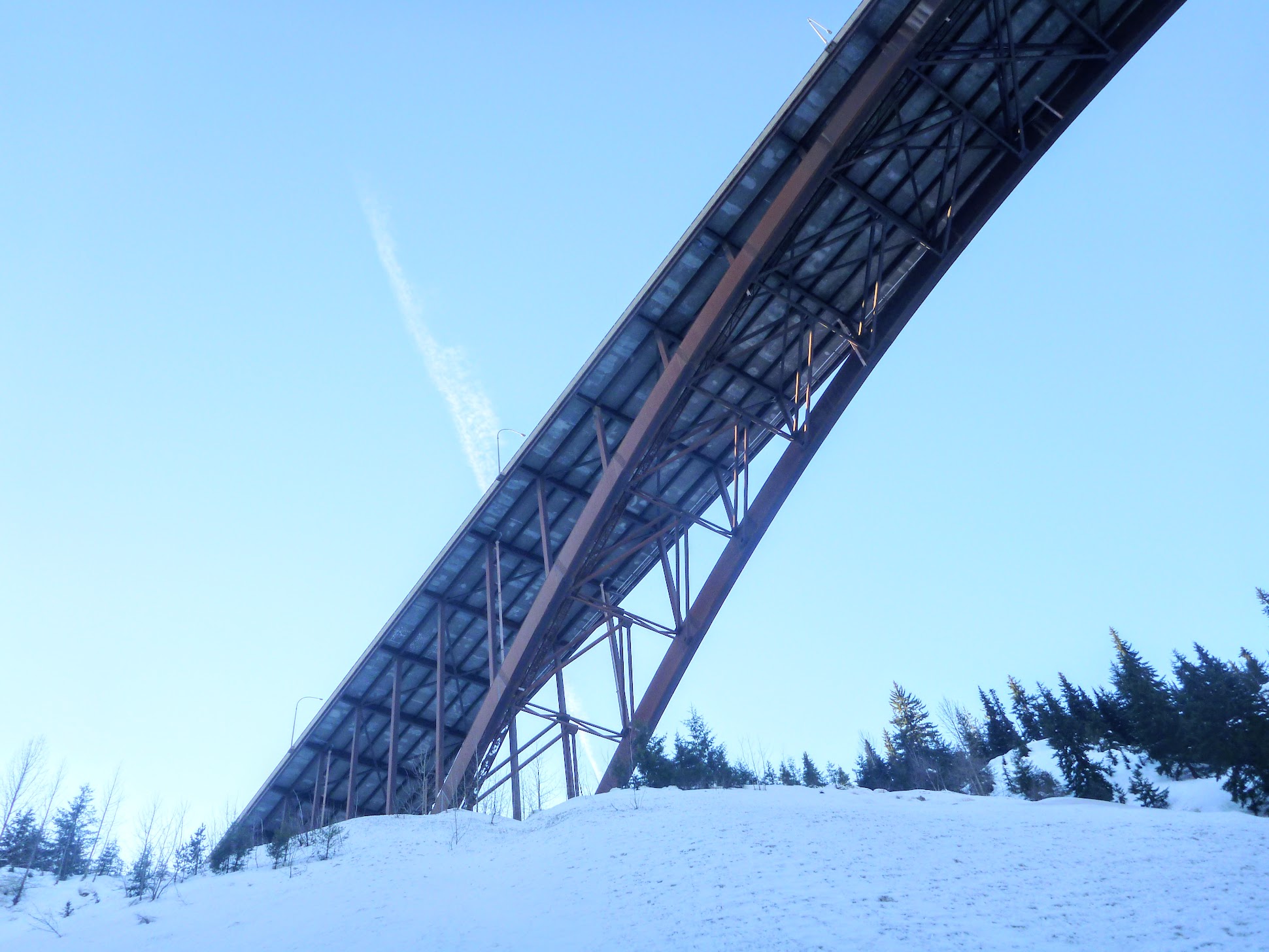 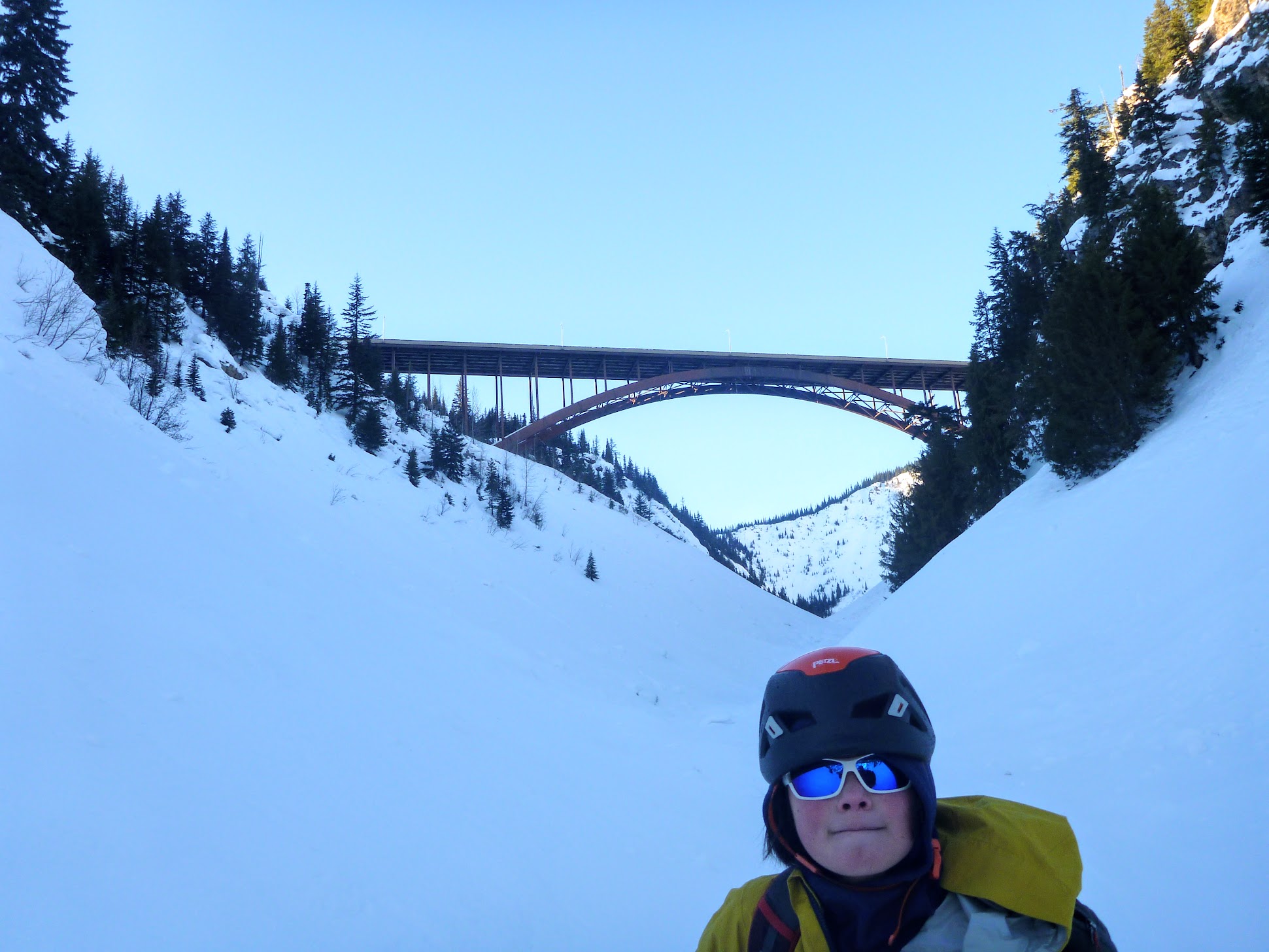 At the end of the gulch, there’s a drop into the Coquihalla River. During the descent, you ski over the remains of a trestle, which was part of the Coquihalla Line of the Kettle Valley Railway. 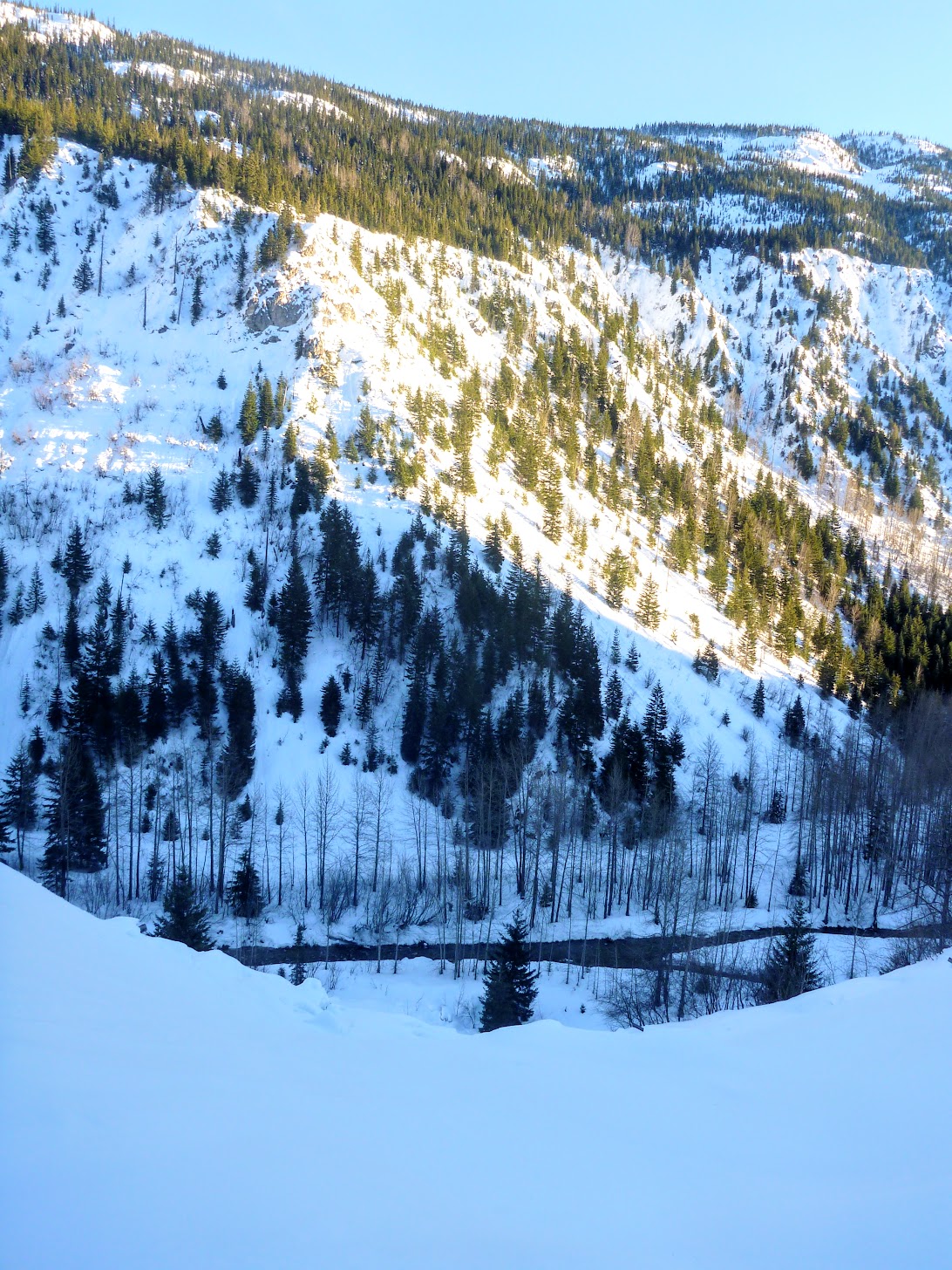 The Coquihalla Lakes Road is maintained but not ploughed and is right beside the Coquihalla River. Unfortunately for Dry Gulch fans, the road is on the wrong side of the river where it meets Dry Gulch, which presented us with the option of crossing the river or negotiating the cliffy walls of the river valley for about 400 m, to where the Coquihalla Lakes Road crosses the river. I’d braced myself for a real dilemma here, but it turned out to be a choice between not-half-bad options. I don’t think there’s a Greek term for that, but that’s okay. We crossed the river, but it would have only taken slightly longer if we didn’t. 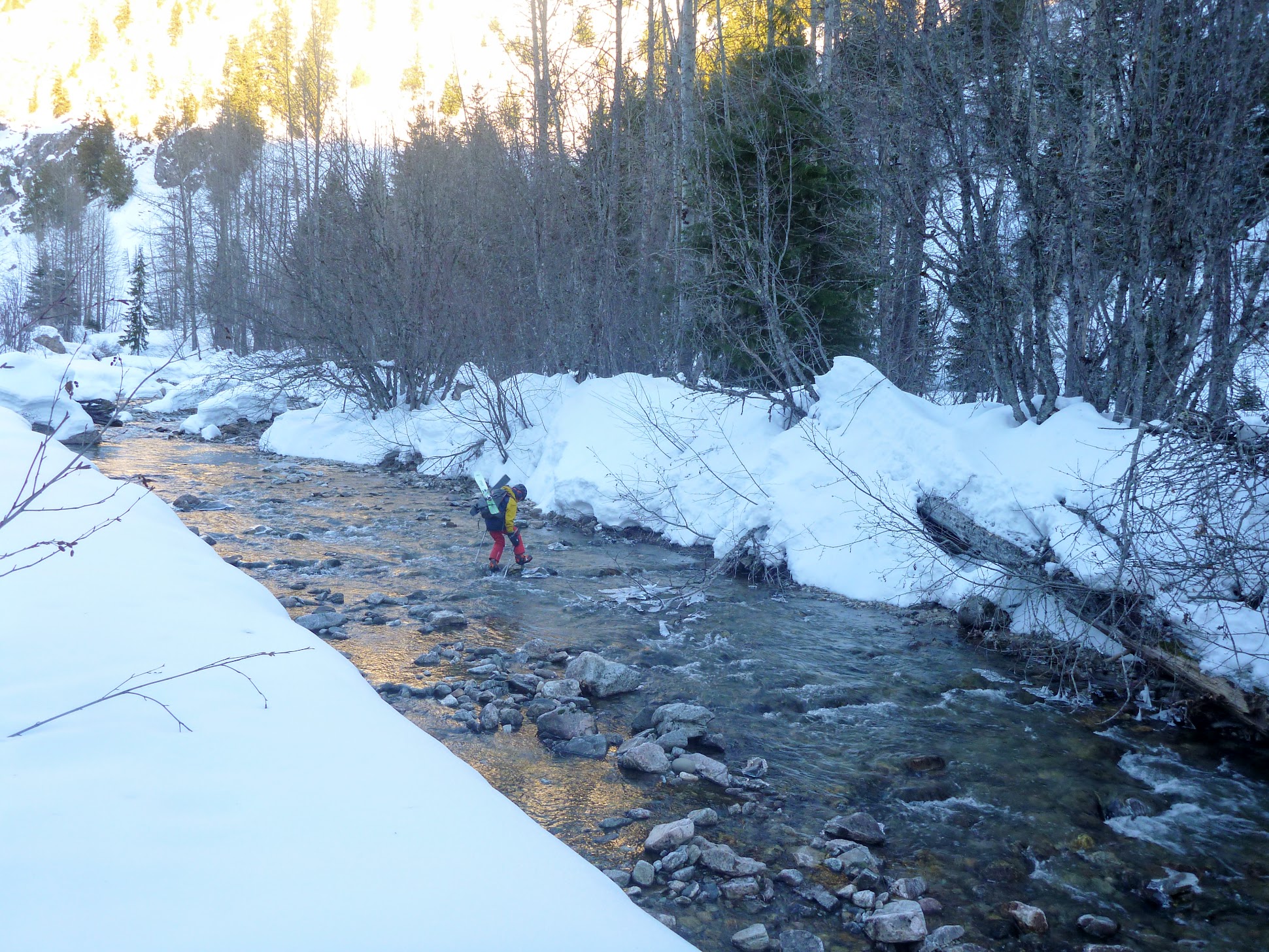 As were skinning up the Coquihalla Lakes Road we noticed old tunnels above us from the Kettle Valley Railway. At that point the road was well below the level of the rail line, but the tunnels looked pretty cool, and there a handy line of frozen avalanche debris that we could just walk to get to the tunnel, so we did. 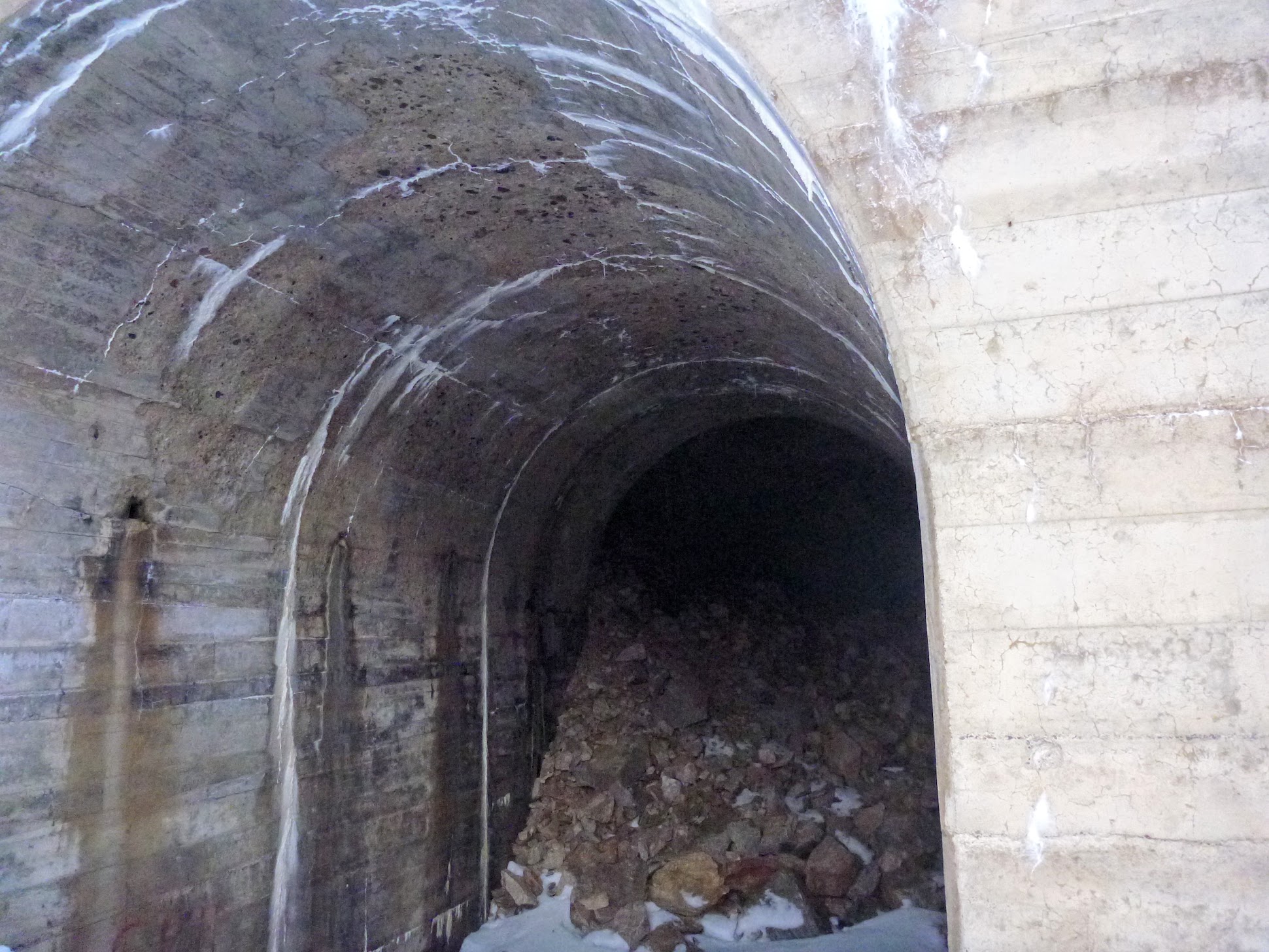 At first it looked like we were out of luck; the tunnel had been demolished. They do that so that they don’t need to worry about people going into abandoned tunnels. Fortunately, they didn’t do that great job of demolishing, and it wasn’t sealed off. It wasn’t particularly long, but since the whole floor was now uneven rock and covered in ice, it was like negotiating a slippery cave and took a little while. The lack of rock formations was compensated for by the ice formations. 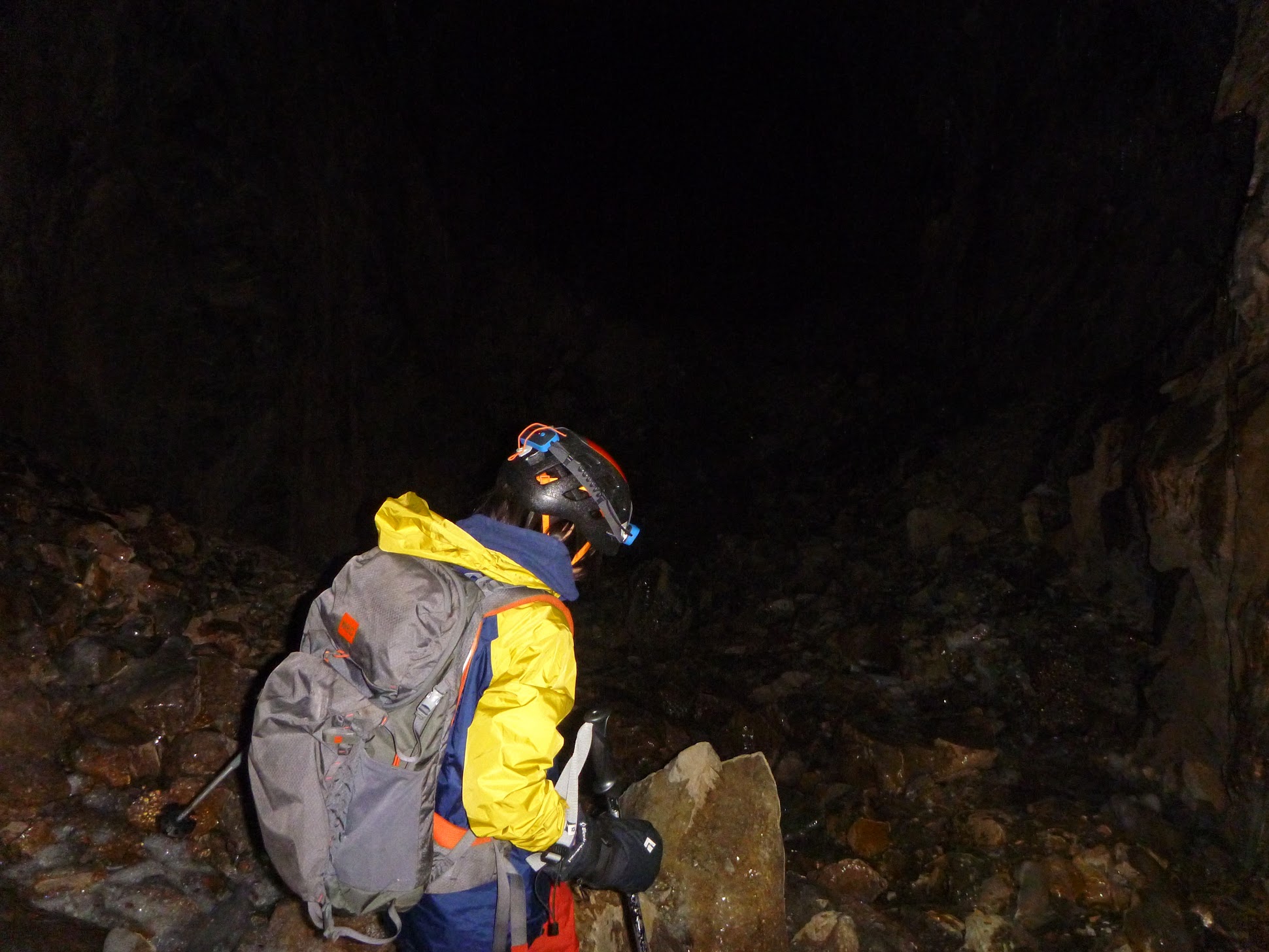 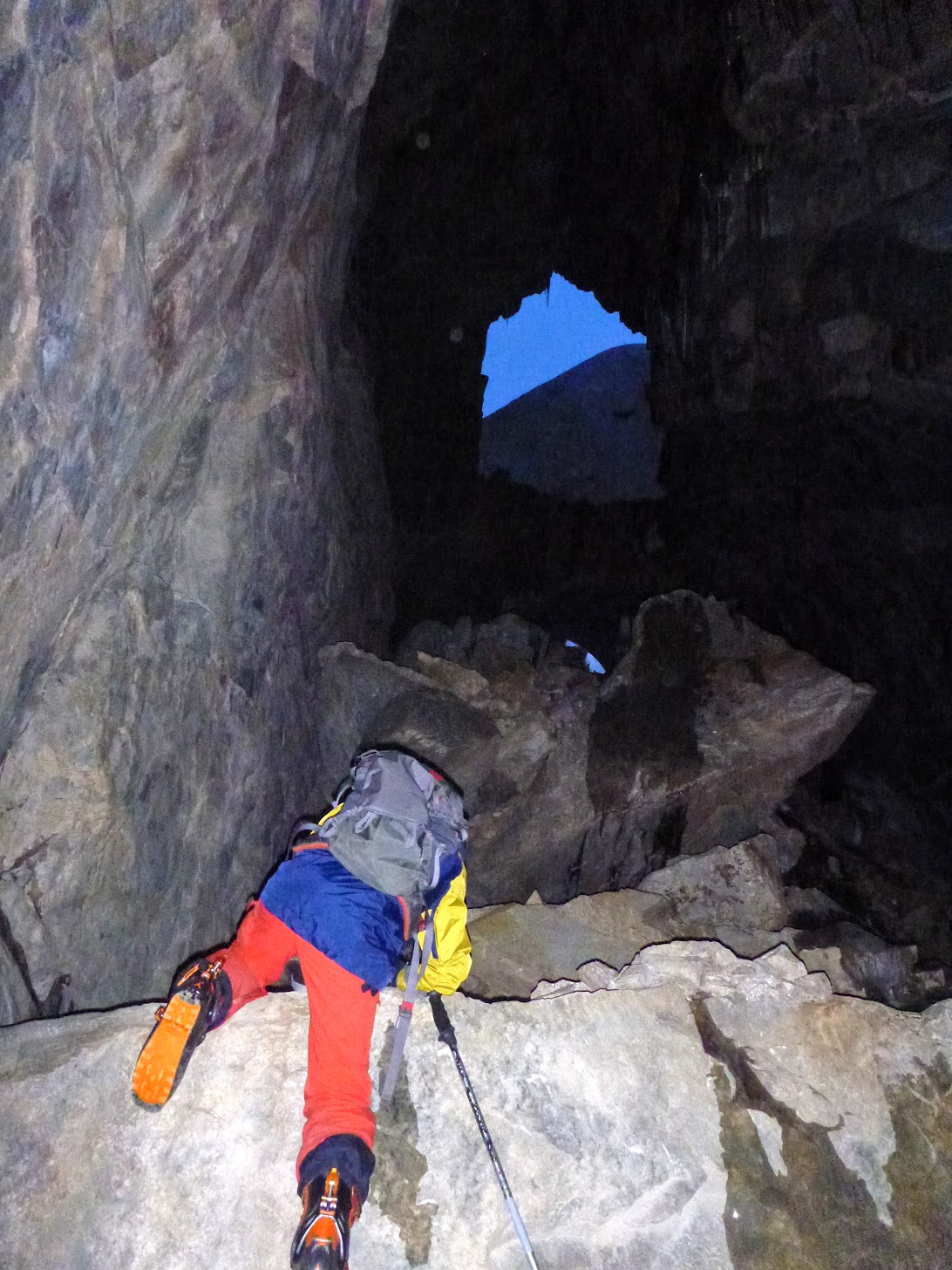 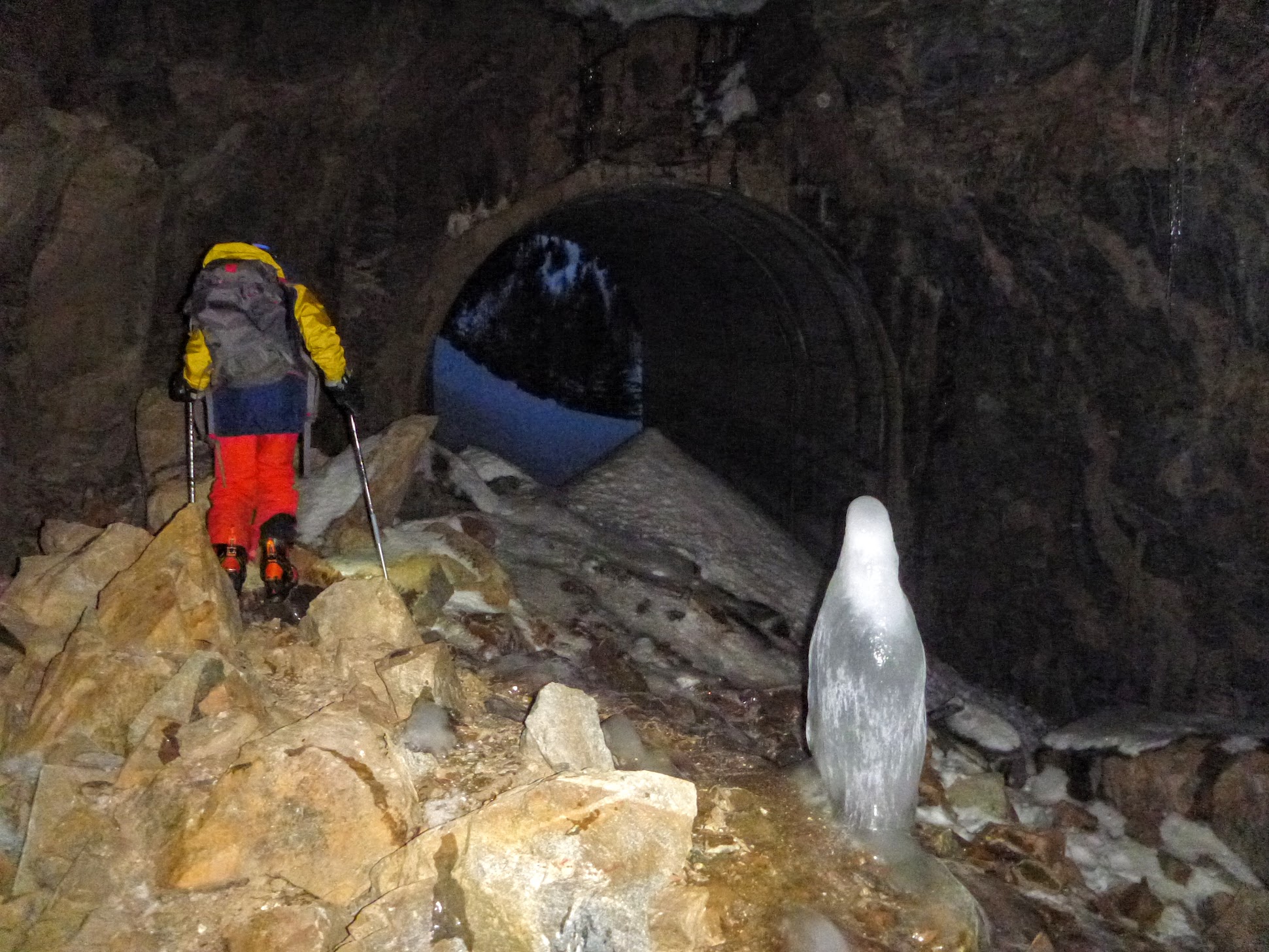 Once we got out of the tunnel, we followed the road to near where we started and climbed out of the Coquihalla River valley and into a series of little lakes. By that time the sun was gone, but there was enough moonlight that we crossed the lakes without headlamps.

The last 200 m was dense scrub with lots of ups and downs, but it didn’t take us too long to get to the fence, which was completely buried in snow in some places, getting us back to Public Washroom Northbound. We were happy that the car wasn’t at Public Washroom Southbound, because we didn’t want to cross the highway with skis in the night.

Overall, this was a fantastic trip. The quality of the downhill skiing was terrible, but that’s not what this was about. I’d highly recommend it if visibility and avalanche conditions are good and you’re comfortable dropping 300 m on junk a football-sized rock will bounce down.

This entry was posted in Trip Reports and tagged Coquihalla Summit, ski. Bookmark the permalink.