The Mountain Gets the Last Laugh(ington)

When my friend Shane mentioned we would probably need a chainsaw to get to Mount Laughington I should have realized what I was in for. This peak is not well-traveled in the winter, and it turns out there are some good reasons for that. Nevertheless, we decided to make a weekend of it – Saturday we would arrive, set up a car camp, and clear as much downed alder off the approach FSR as possible before summiting on Sunday. We were successful at some of those things.

My first clue that this was going to be even more of an adventure than expected was when we arrived at the Foley Creek FSR turnoff and found multiple “puddles” blocking the road. I use quotes because I’m not sure if there’s a better word for when a puddle takes up the entire roadway. Since we were in separate vehicles (great for covid safety but terrible for the environment) my partner Jessica and I got to watch as Shane (with his passenger/partner Sasha) drove straight in with zero hesitation. As they started to disappear up the road I didn’t have much time to think on it before I followed suit. The idea of potentially having to fix my truck on a grad student stipend was unappealing but so was the idea of giving up so early in the day… Anyway the water was probably around 2 feet deep at the deepest spot, so not enough to flood an engine of an off-road capable vehicle. This is definitely not the road for an Evo though. 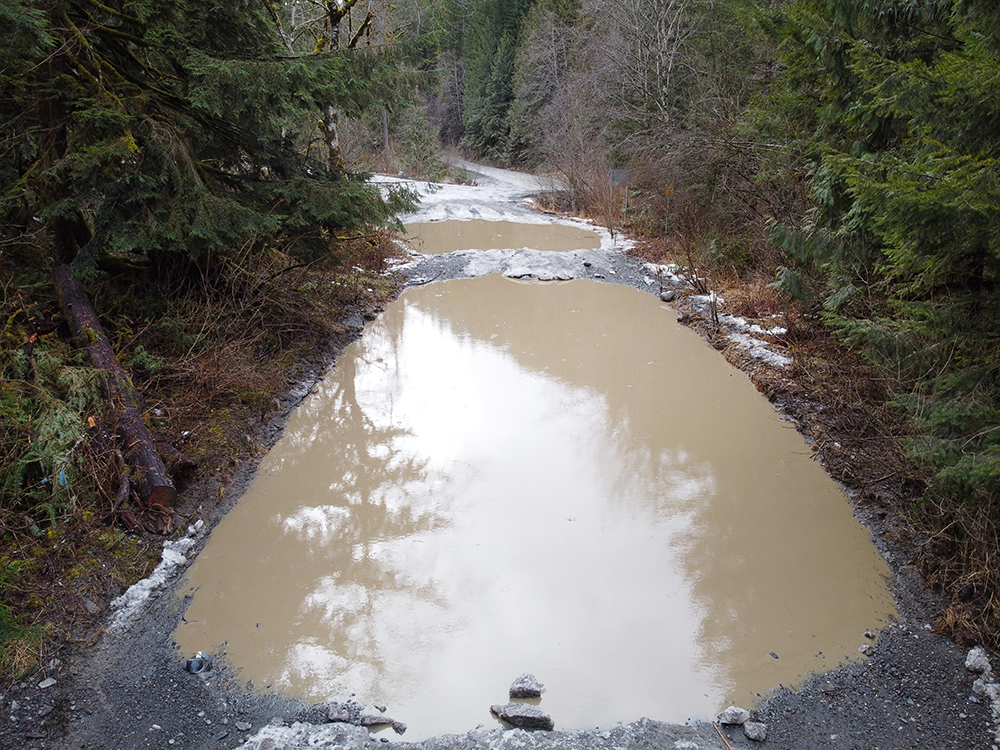 I can’t say that the road improved all that much after the first section, but at least it wasn’t notably worse. Except for the increasing amounts of snow as we went up in elevation. Along the way I may have had a bit of an anxiety attack and almost turned around, but seeing how close we were on the map decided to push on. The others had picked out a very nice campsite right along Foley Creek so we pulled in and began setting up a base camp. Jessica and I opted to sleep in the back of the truck rather than deal with a tent, so I had some free time to get a few aerial pics with the mini drone. 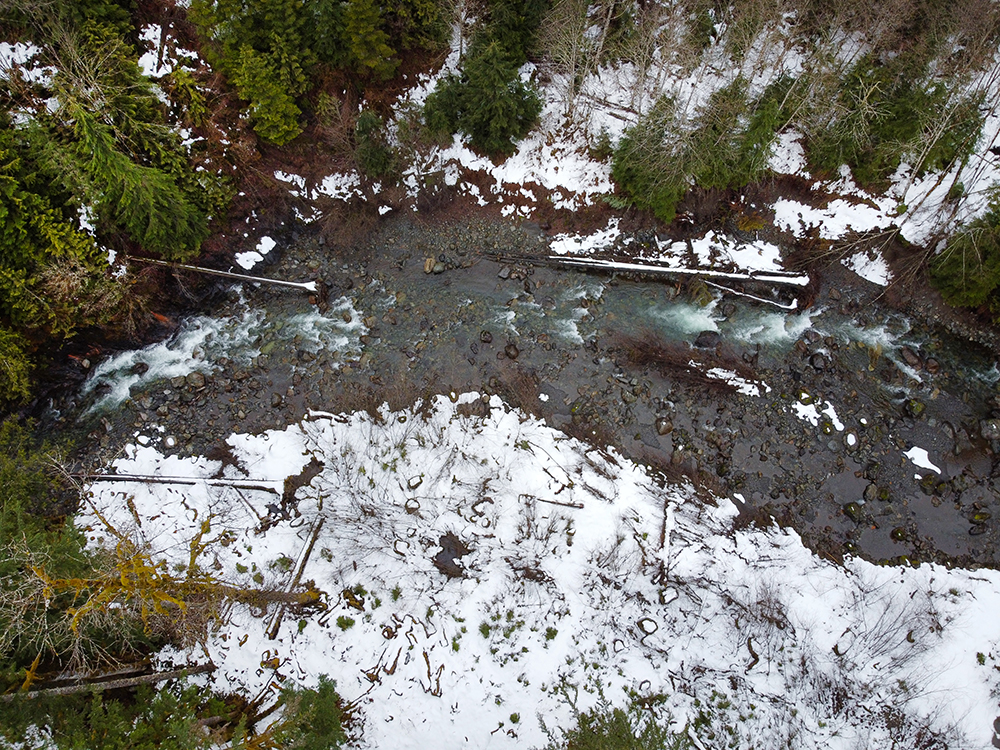 Above the peaceful Foley Creek. 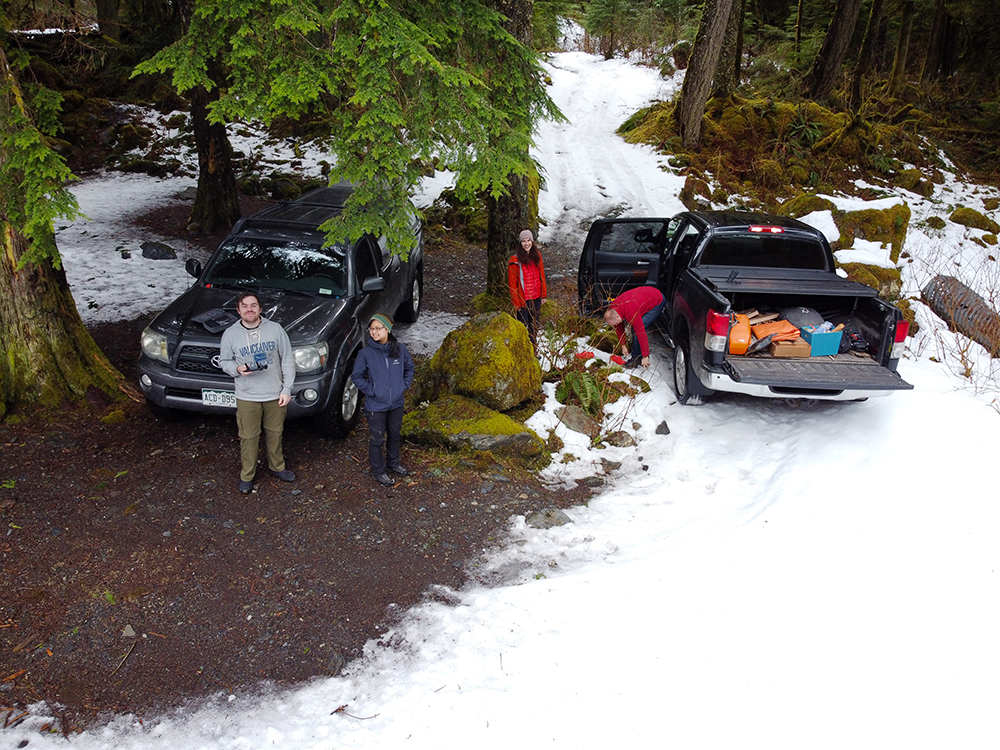 I guess having 2/4 people paying attention in the group photo was the best we could do.

Once camp was all ready to go we walked a little further up the road to the Airplane Creek FSR, which serves as the main access to Mount Laughington. Glad we were the only people out there because we must’ve looked like something out of a horror movie.

Airplane Creek FSR is apparently notorious this year for its ~ 1 km section of alder blowdowns. Our goal for the rest of the day was to cut down as much of it as possible to make our lives easier on Sunday and to help out anyone else who wants to do this trail in the future. About 2-3 km up the road we came to the first downed trees and Shane started up the chainsaw. 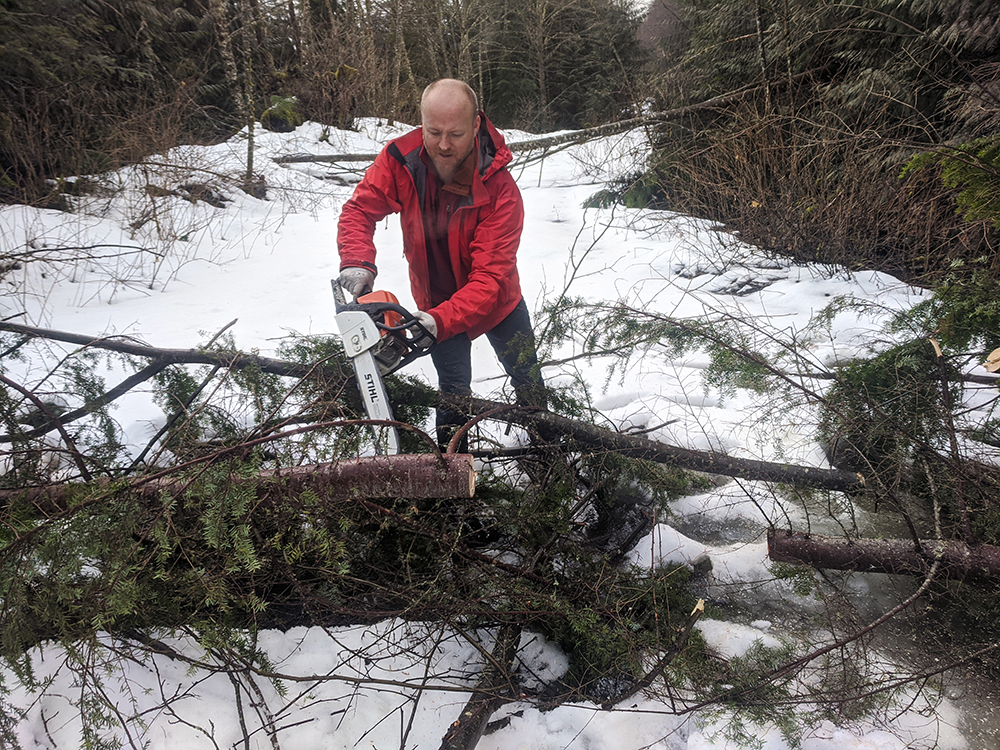 Cutting through one of the many patches of downed trees on the road.

We quickly settled into a pattern: Shane would chop up the fallen trees and we would pick up the pieces and fling them off of the road. Perhaps this would have been a little easier with less snow, as some branches ended up frozen/stuck under the weight of it. But for the most part we were able to clear a path for foot travel through each section. We reached the apparent end of the blowdown and started hiking back, cutting and clearing even more until an awkwardly located branch loosened the chain from the saw. Without a tool to fix it we were done for the day, though there wasn’t all that much left to go anyway.

Soon we arrived back at camp, where we started to look for firewood with about an hour of daylight left. Shane let us try using the fixed chainsaw to cut firewood, but we found the wood there really dense and difficult to cut through. We discovered later he may have put the chain on backwards. Despite the chainsaw issues we soon had a large fire going with a good supply of beer as well. A winter fire is great because the warmth is so important, plus you don’t really need to worry about how large it gets.

The next morning we aimed for an early start at 7 but ended up closer to 7:30. Walking up the road proved quite easy thanks to our work the previous day. Above the last of the blowdown, at about 750 meters, the snow got deep enough for snowshoes to be helpful. As we got higher the morning clouds lifted a bit and we started to get glimpses of the surrounding mountains. 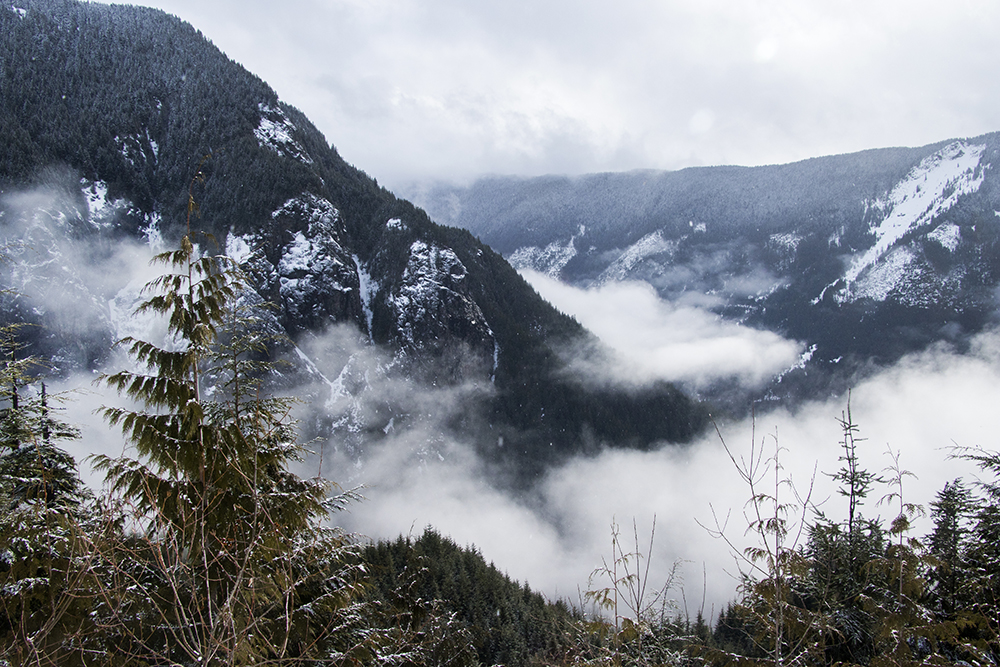 Morning fog in the valley below. Some mountains started to appear to the southwest.

In addition to the now cleared road we were also fortunate to find that the snow covered a dense section of alder saplings that had slowed Shane and Sasha down on one of their previous outings to the area. 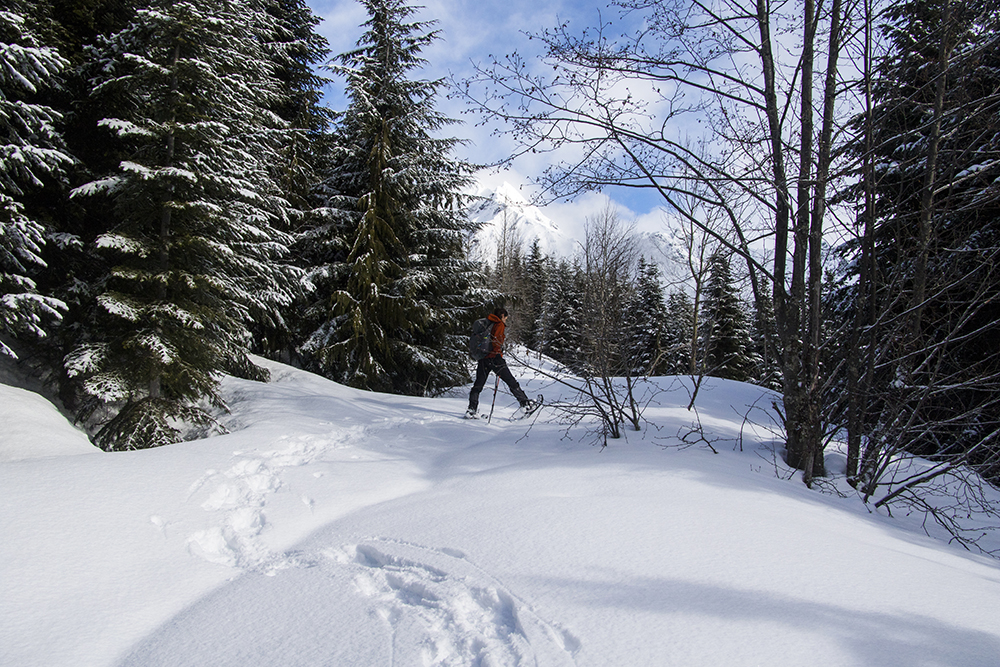 Sasha led the way, but thanks to the solid snow crust she didn’t have to do a lot of trail-breaking. The lumpy road surface is due to the buried saplings underneath. 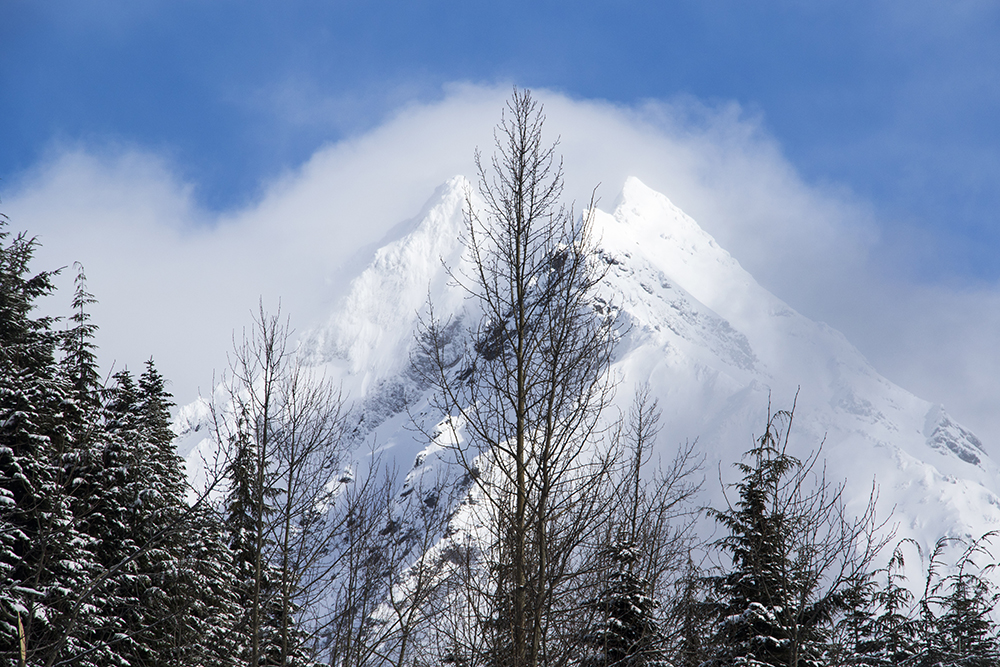 As the weather cleared even more we got views of Foley Peak and Welch Peak, which look like fun scrambling destinations for this summer. Still some low clouds looking back toward the main Chilliwack River Valley.

Around 1100m elevation I made the mistake of thinking about what food I wanted to have after the hike. I realized then how hungry I was already, so I ate a clif bar while walking and hoped that it would keep me moving until we reached the summit. A nice clearing near the end of the road at about 1200m. 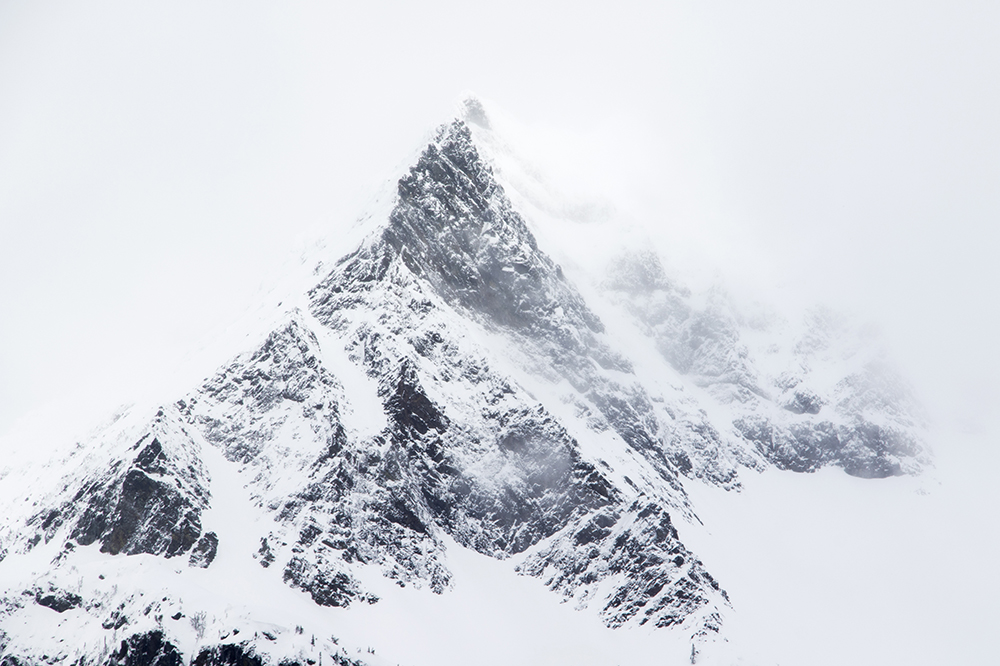 Not sure what it’s named, but I liked how peak-y this particular peak looked.

Once the road ended the trail got significantly steeper as it approached the ridge line. While this trail is supposed to be quite avalanche safe there were a few clear slopes with no trees that I think could slide in the right conditions, so we were careful to pick a good line and remain on the ridge top. Once on the ridge the going actually got a lot harder though. The ski tracks that we had followed the whole time ended, so we were now breaking entirely new trail. Worse, the crusty snow had been replaced by powder, so with each step whoever was in front sank up to their calves. When it was my turn I tried to break trail for a while but tired faster than I expected. Turns out while dreaming of food my body was trying to tell me something – I had already been running low on energy and now felt like I was hitting a wall. The others took the lead for a bit so the going was easier for me with the broken trail, but I soon had to admit that I was no longer certain about summiting.

Meanwhile, the weather had deteriorated considerably. Large snowflakes began to fall and the mountains disappeared into the fog. We had reached a decision point. Shane estimated that we still had about 200 meters of elevation left to gain and around 2km of distance, which would probably take an hour because of the difficult conditions. We paused for a snack/lunch break to think it over. The view from our lunch spot on the slopes of Laughington. A note on being super vigilant of your surroundings – as we were on this bump we had no clue that there was such a large cliff on the side of it. Luckily there doesn’t appear to be a cornice or this could have been a dangerous spot.

As we finished up our lunch I was about to hesitantly suggest we continue toward the summit, or that the others go on ahead, when Shane and Sasha recommended that we turn around. By their logic, without all four of us splitting up the trail breaking we would have a hard time making the summit, and the weather meant we probably wouldn’t have any views to make it worthwhile. I admitted that I wasn’t all that keen to continue in the current conditions so we had our decision. I half-joked that the minute we started heading back the weather would improve. Which, of course, it did right as we regained the bump on the ridge. 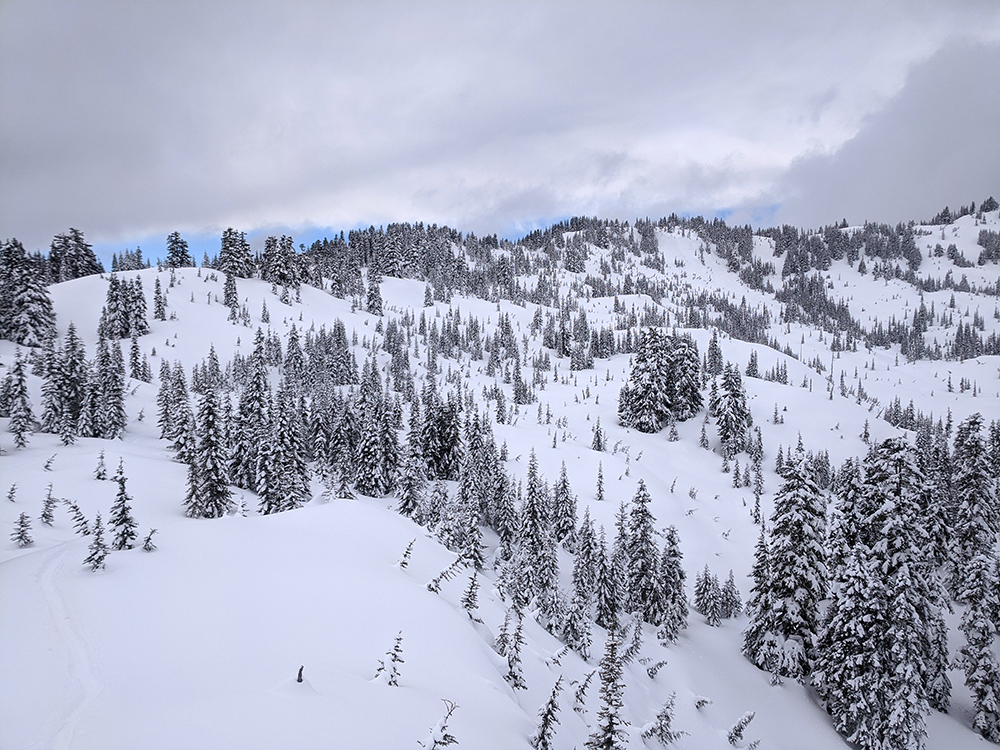 Of course the blue sky appeared right after we turned around. The mountain had to get the last laugh.

Predictably, the weather improved as we continued our descent. The sun and warming temperatures must have weakened the snow crust a bit as we found ourselves punching through a lot, often at potentially ankle-twisting angles. However we were able to avoid any problems so the return trip was otherwise nice and boring. Williams Peak emerged from the clouds as the weather improved. The clouds on surrounding peaks continued to change rapidly though. There was no guarantee that we would have seen anything from the summit of Laughington anyway.

Back at camp we only had to clean up the site and head out. Not sure if it was because I was too tired to worry about it or because I now knew what to expect, but the return drive seemed a lot less stressful. Once again there was no hesitation from Shane.

It’s been a long time since I’ve been the one lagging on a hike, and it always sucks to turn around so close to the summit. If push came to shove I probably could have made it to the top but doing so could also have led to a more dangerous situation if I ran out of energy again even further from the trailhead. So, if you take anything away from this trip report it should be that it is never ever a bad decision to turn around, even if it’s just because you’re not feeling amazing or the weather is being weird. As far as I’m concerned Mount Laughington will still be there, and someday I intend to get the last laugh.