Two Bears is this run described in the Baldwin guide that is accessed from the Zopkios Rest Area but dumps the skier out a bit south of the Box Canyon Chain-up Area. Baldwin suggests leaving your car at Box Canyon and hitchhiking up to Zopkios. COVID sinks that idea, but, fortunately for us, we share a house with the Websters, and in particular Scott Webster, who was VOC exec way back in the day. Scott was game for an adventure, so I had the brilliant plan of meeting at the Box Canyon Chain-up Area, piling into Scott’s car, going up to Zopkios, and driving Scott back up to his car at the end of the day.

When we got to the Box Canyon Chain-up Area, we discovered that there are “no parking in snow season” signs all over the place. I think Baldwin probably just parks there anyways and hopes for the best, but we’re all a bunch of goody two-shoes, so I left the my pack, skis, and Devlin with Scott at the chain-up area and drove up to Zopkios, where I could turn around back to the Box Canyon recreational parking—which is on the southbound side of the highway, a few hundred metres south of the chain-up area—then ran back to the chain-up area in my ski boots. Soon after, we were up at Zopkios, heading to the Needle ridge. Heading up the Needle ridge (Scott)

We had a snack when we got to the ridge. My packet of mixed nuts had expanded as we’d ascended and seemed like it was probably an explosion risk. Despite being helped out by the internal pressure, it was very tough to open, and I’m pretty sure that it could survive the vacuum of space. 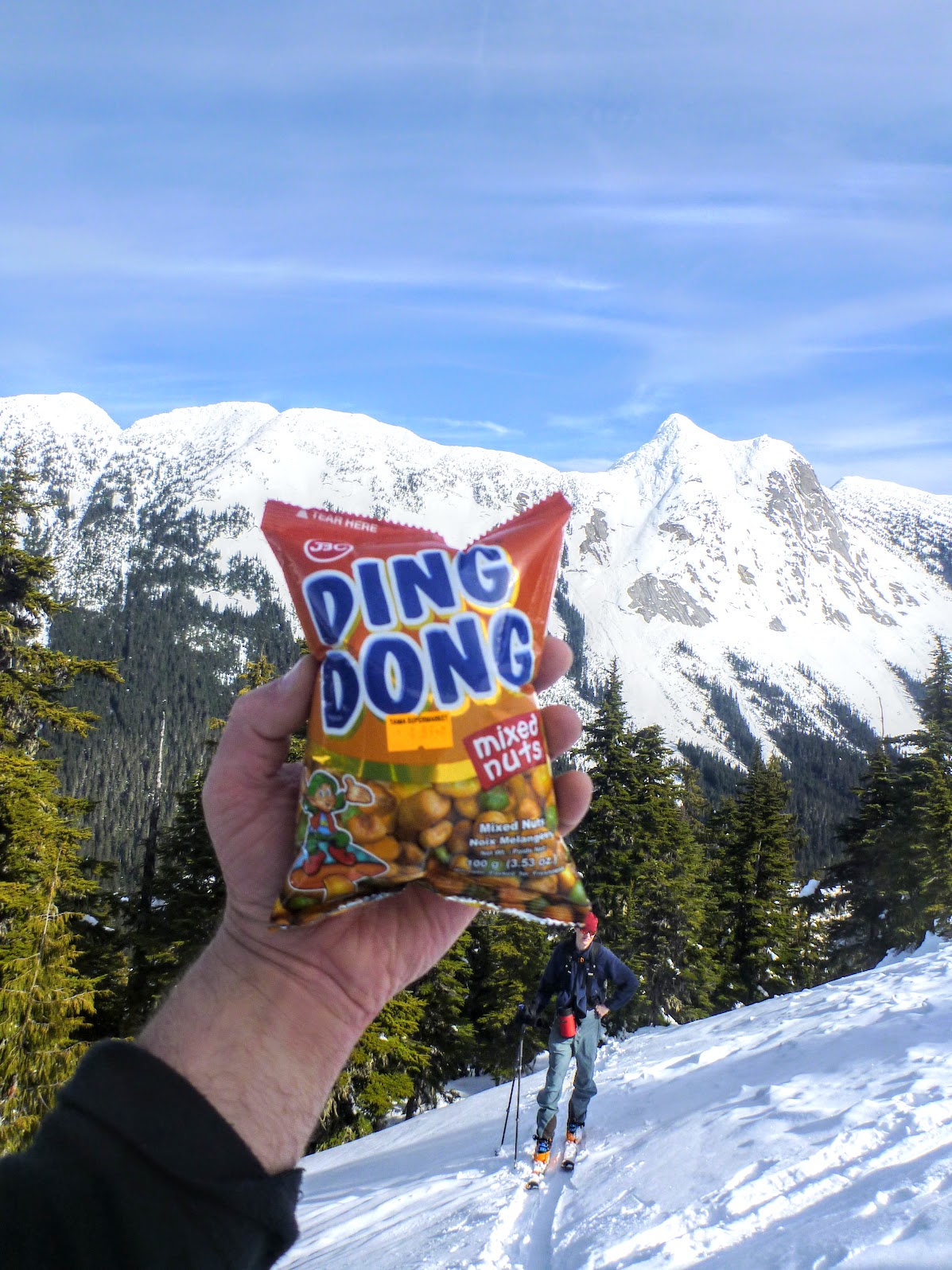 As we approached Flatiron from the col between it and Needle, we were all impressed by the enormous cornices. Devlin described them as Baldwin-surfing cornices, which confused Scott. I draw attention to that phrasing because it lets me shameless segue into a John Baldwin story to spice up my otherwise lacklustre trip report. I really wish I remember what mountain this happened on, but I’m all mixed up. I first heard about it from Tami Knight when we were exchanging horror stories, and I asked Baldwin about it the one time that I met him, and he told me that the content of the story was right but Tami had told me the wrong mountain.

Anyway, Baldwin was on the top of something and was well aware that there was probably a large cornice, so he decided not to get too close to the edge. He had a slightly different definition of what constituted “too close” than the rest of his party, and when the cornice broke off, he was on the wrong side of the crack. The cornice dropped a horrific distance with Baldwin on top of it. The cliff made a smooth transition to a more mellow slope, and the cornice came to a stop 400 somethings below the summit. I really like to think it was metres, but it might have been feet. Either way, it was a long way. The cornice lost a lot of mass on the way down but never rolled, and Baldwin stayed on top. He was mentally and physically bashed up but had no major injuries. He’s well aware that most of the time the cornice rolls or breaks, and if that had happened he’d be a thin smear. He said that day caused him to make substantial changes to how he viewed risk.

Back to a much less exciting trip report, on Flatiron, there was this dude with this stupefying device—this backpackable tow rope. How does the idea of carrying up a nine-pound device, plus the cord you need, plus an anchor, so that you can do a few short laps without skinning sound to you? If that sounds great, you should totally go to Zoa Engineering and get yourself the PL1. Scott took a video. Devlin agreed that it was pretty ridiculous but pointed out that it was waaaay less noisy than snowmobiles, which is a fair point. The summit of Flatiron is pretty flat

Two Bears begins on the ridgeline between Flatiron and Portia. Baldwin points out that it’s a big avalanche path and has buried the highway seven metres deep, so stability had better be decent. The bowl it’s in is north facing. Both the avi forecast and observations showed that all the problems were on south-facing features, so we went down. The south side of the ridge is getting dodgy, but Two Bears goes to the north

The skiing was super-fun for most of the way down. It started with a few inches of soft and dry but supportive and dense snow above a hard-but-not-icy layer, then transitioned to a soft wet layer above a still-frozen hard base. Good times near the ridge top Good times a bit further down Devlin throwing it around

Near the highway, things started to get more interesting. On the Baldwin map, there’s a cliff symbol and the text “waterfall” with an arrow that goes around the waterfall to skier’s left. I think the implicit assumption is that a mid-winter avalanche will have filled up the creek above, but for us the creek was mostly open. I wanted to stay on the left side of the creek all the way down, but we came to a place where there was no real estate on the left, just a cliff into the creek, and a beckoning snow bridge, so we crossed. The snow bridge was plenty wide, but the bank was steep on either side, and vegetation prevented contouring, so we all took a charge at it. Scott hit it way too fast and described it as being “excessively launchy” but stayed upright.

Shortly afterwards, we ended up probably above the waterfall, and we could see a clearcut on the left side of the gully, but we were on the right side of the creek. 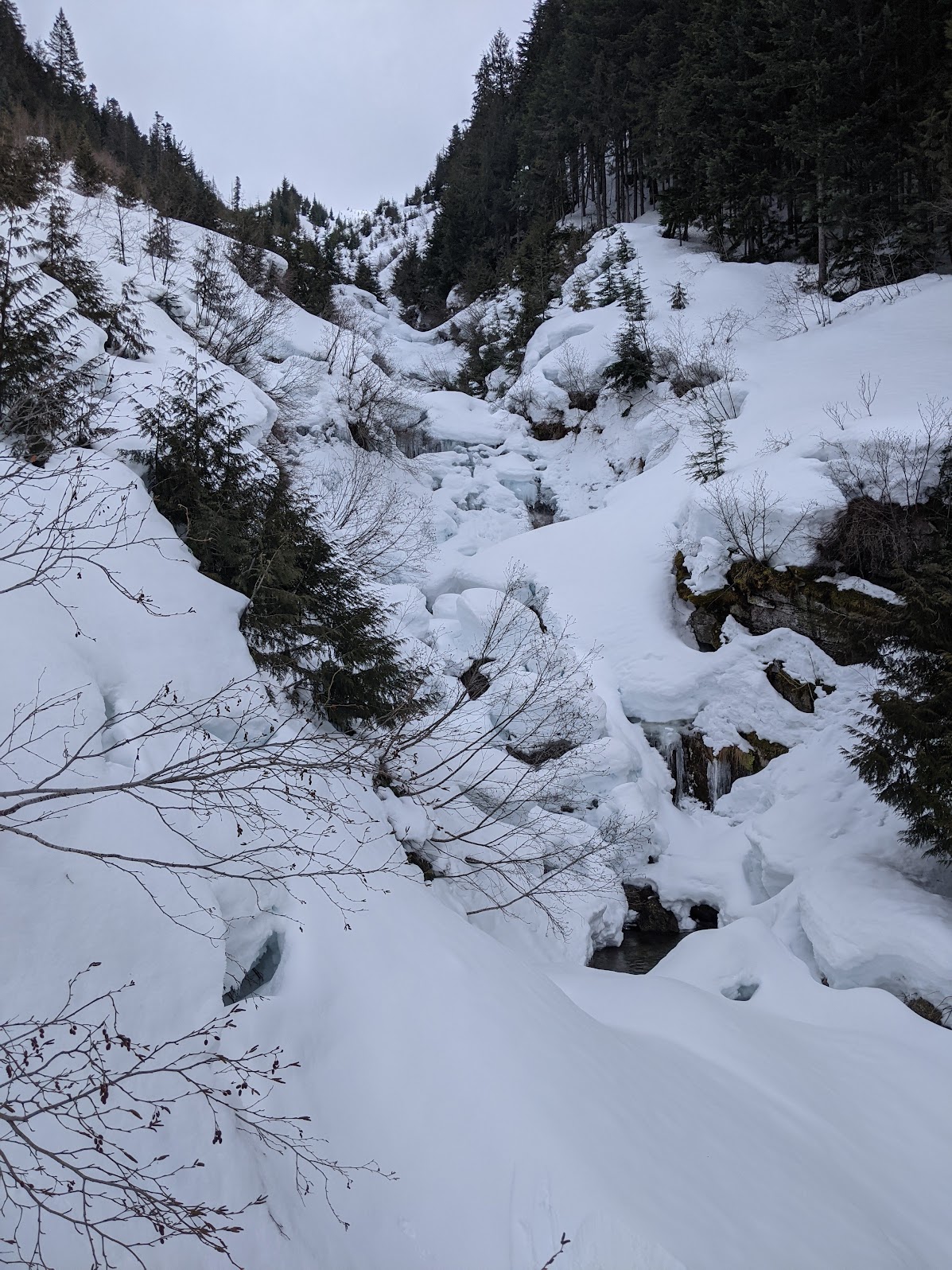 Looking up the creek (Scott)

A bit of mandatory air on the way down and some awkward side stepping on the other side got us across. I’m sure that this is where Baldwin intended us to go, but trees had grown, and the clearcut was now a dense replanted maze of treewells. This is where the arrow told us to go

We slithered down and got to an old road, very near the highway, and followed it back to the Box Canyon Chain-up Area. 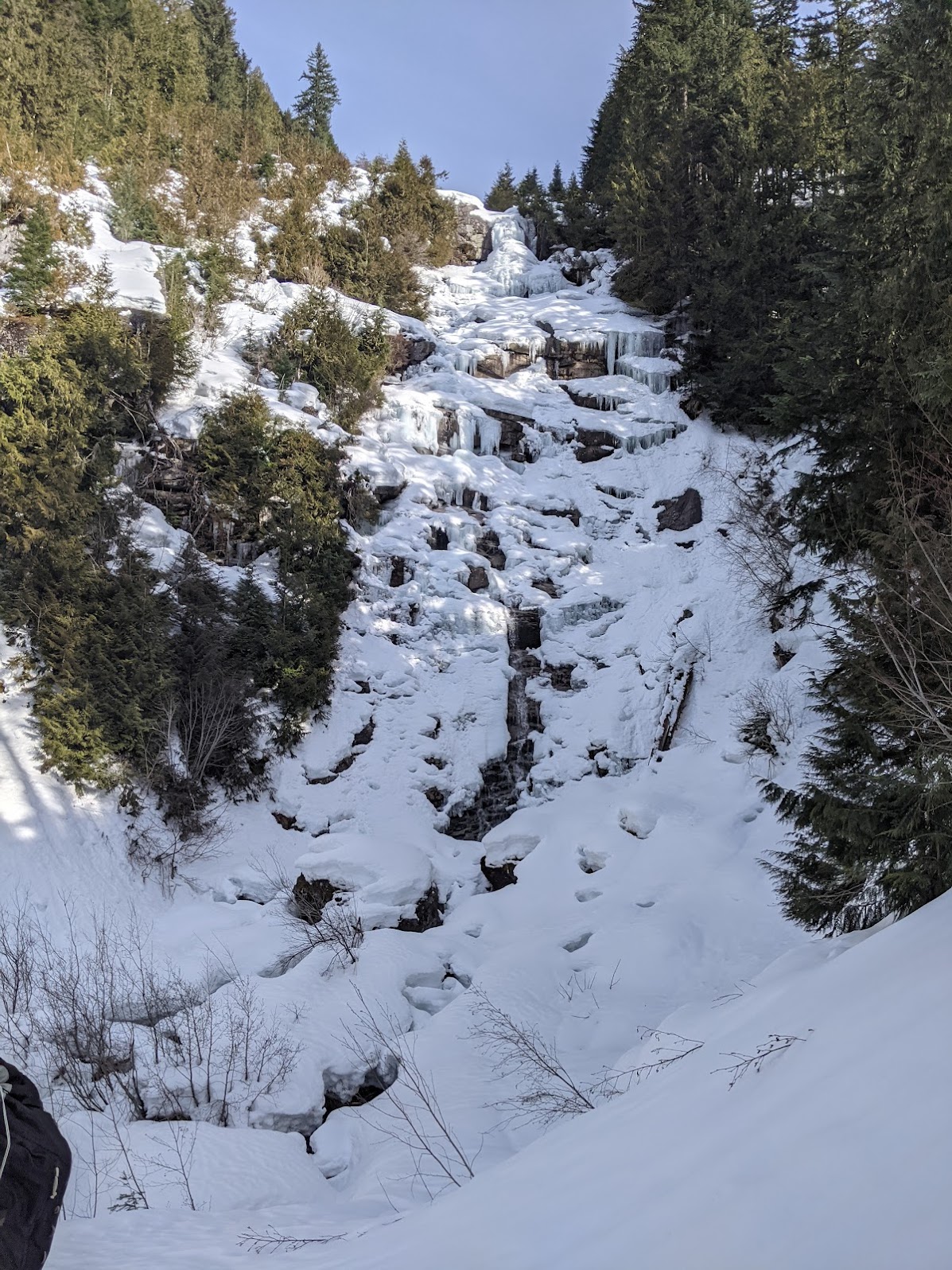 Looking up from the logging road at the waterfall we avoided 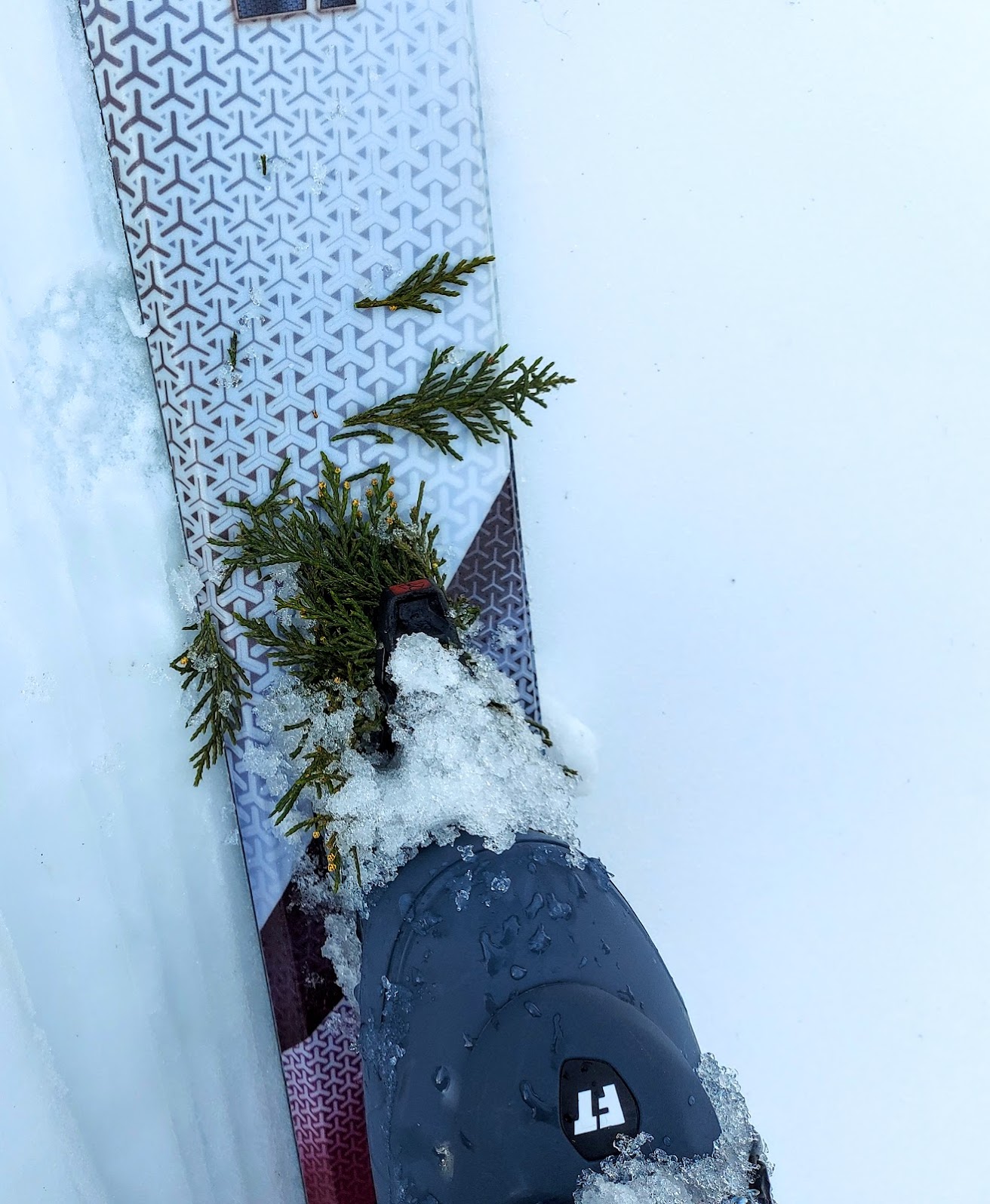 One of the sections of avalanche debris over the logging road

There was a creek crossing there that would have been less gross if they hadn’t been ploughing the chain-up area into the creek. The morning and evening photos from Zopkios showed that lots of avalanches happened during the day. 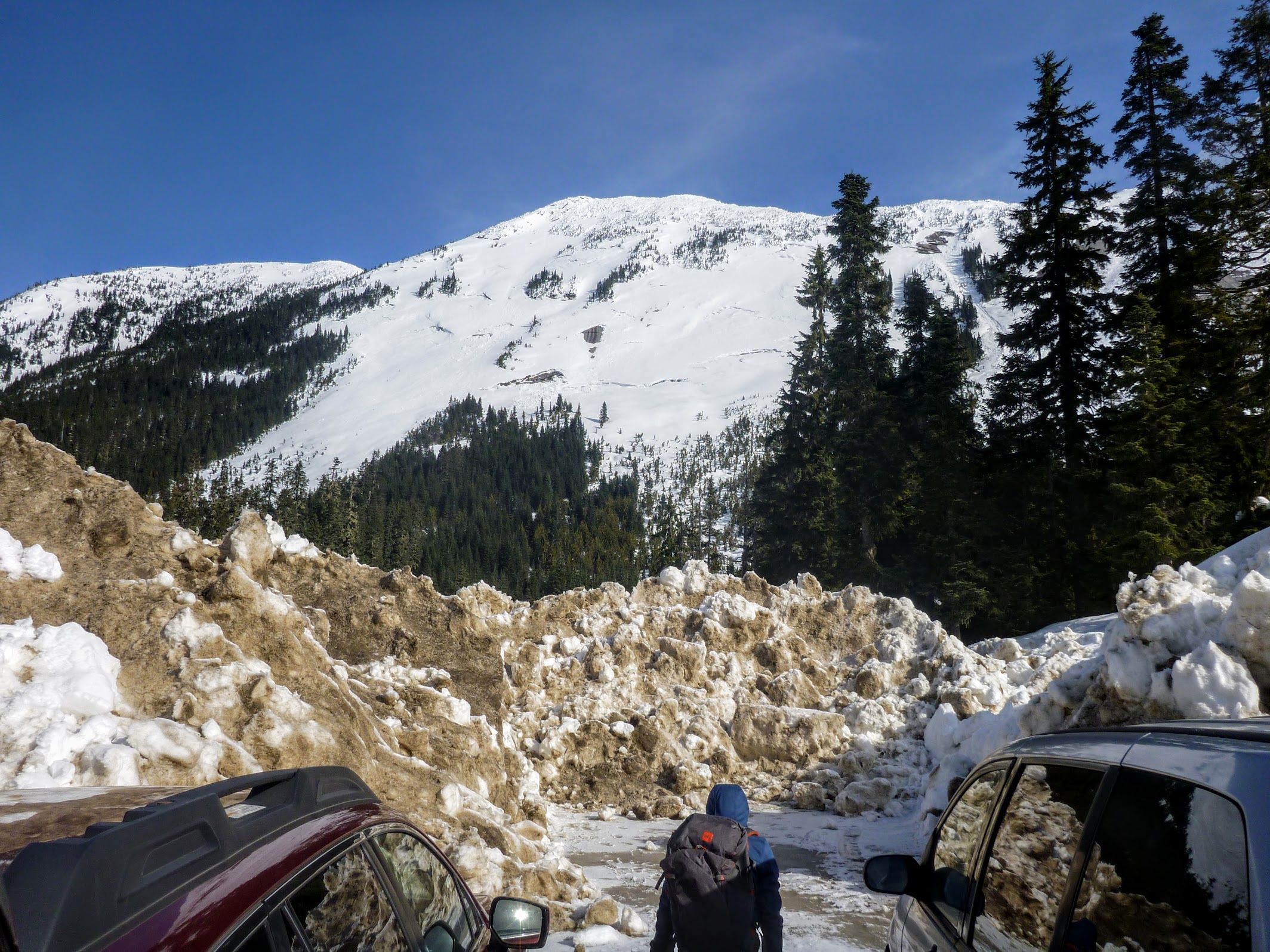 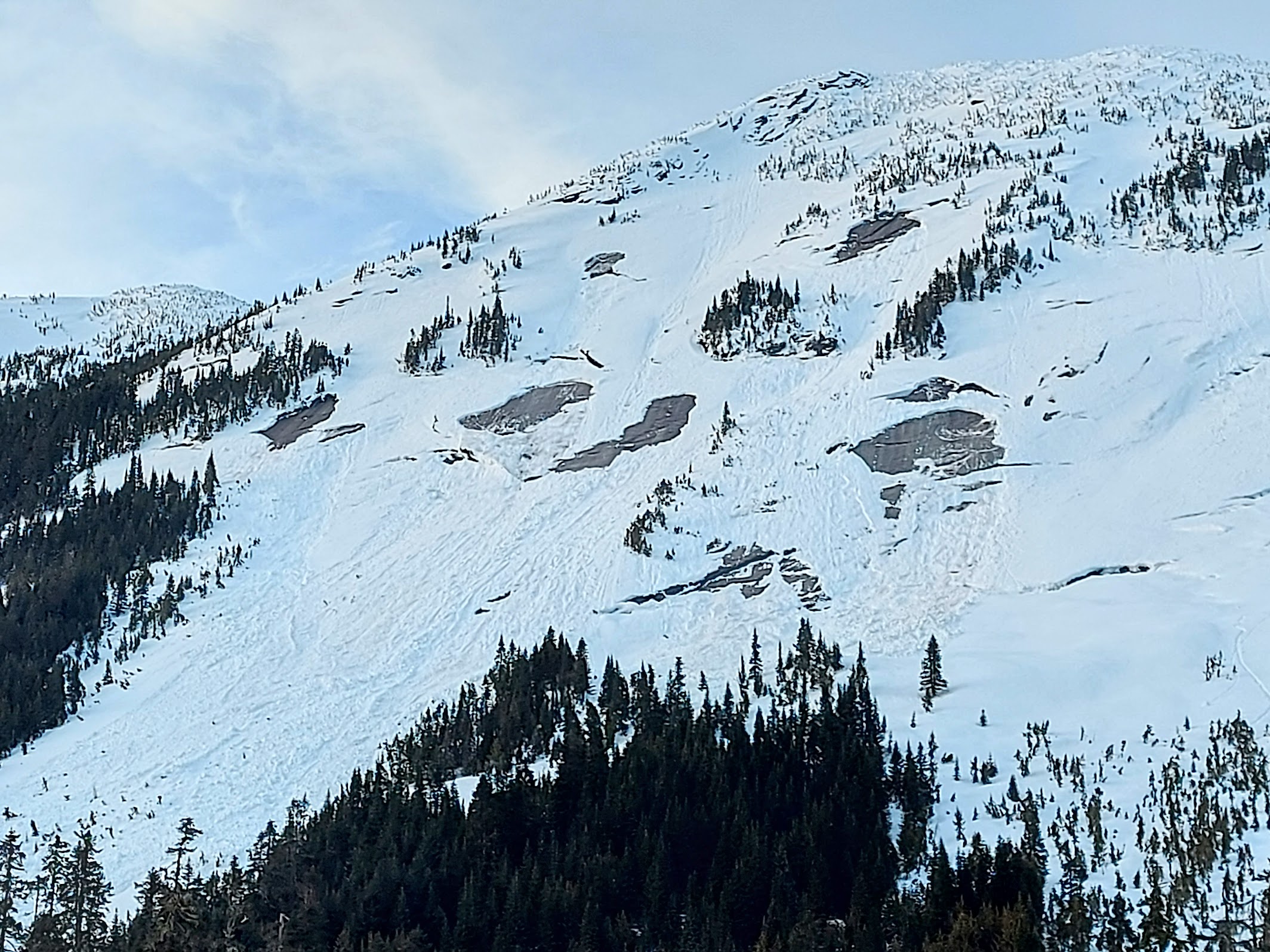 This entry was posted in Ski, Trip Reports and tagged Coquihalla Summit. Bookmark the permalink.