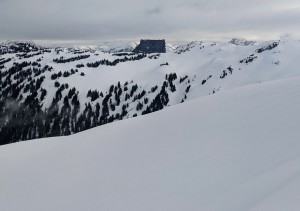 Me and Birgit Rogalla were leaving Vancouver on Friday evening, driving down Main St. in a mess of traffic, when we passed Gabrielle Booth on her bike. We had a quick shouted conversation through the window, and when I mentioned we were going to attempt (and probably fail) Mt. Garibaldi, Gabrielle said: “You’re going to Garibaldi NOW??!!” Which was probably the right reaction. The forecast for the morning was a solid layer of cloud at an altitude of ~2300 m, then strong winds starting around noon, then a big storm coming in the afternoon. We were counting on the summit being clear of the clouds in the morning, with the idea that if we left early enough we might make it there in time.

So at 3:30 AM on Saturday the alarm went off, and soon after we were trudging up the Cheekye FSR under a (nearly full) moon. We were a bit sluggish, and starting down at 700 m didn’t help, but we did eventually make it along the full length of Brohm Ridge. The clouds were below us, and we looked over them to the Tantalus Range, flushed with the dawn, and the Table, looking like a frangible imitation of the Kaaba. 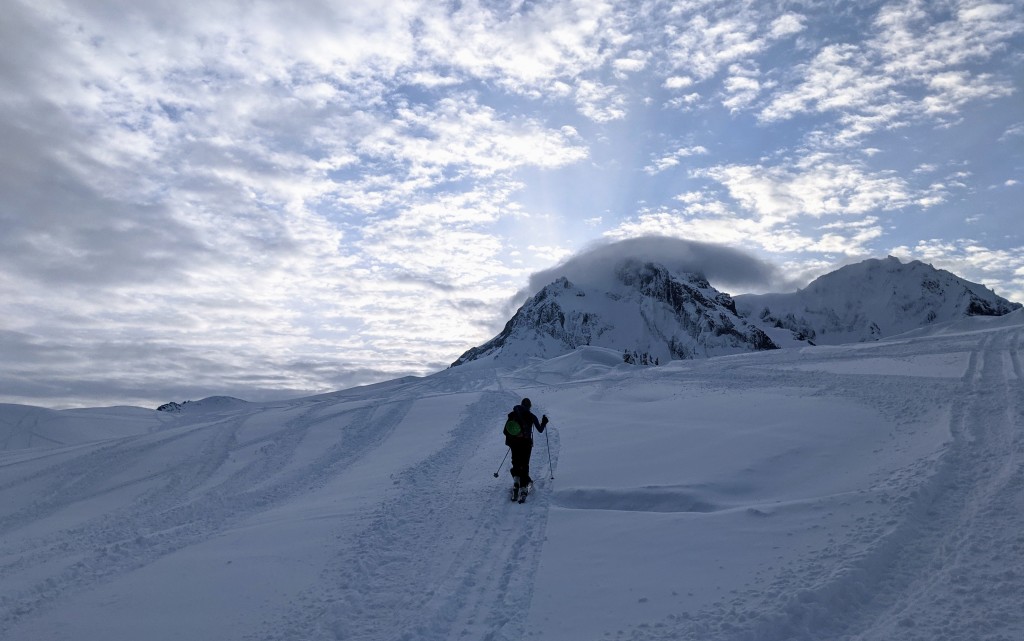 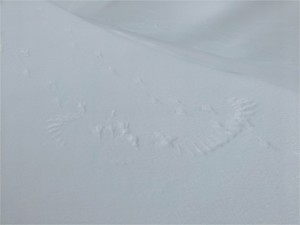 Past the rock pinnacle on Brohm Ridge (more on that later—-I’ll put some route description stuff at the end), we stopped to faff for half a sec and I put my helmet down. I looked away and suddenly it was accelerating downhill on a thin sun crust. I tripped over my backpack, waddled around, and bombed after it with my skins on. It had a pretty good lead. The slope steepened, and the helmet and I both accelerated, already 100 m away from our faff stop and quickly losing precious elevation. I was looping shallow turns so I wouldn’t crash and lose it forever, so I set up a perpendicular interception, timed it right, and snatched it off the snow around my ankles just before it hurtled off a steep roll! It was probably the most exciting event of the week.

As we skied across the flat Warren Glacier it was clear the clouds were rising and thickening. But our luck held—we were in the lee of the Garibaldi Massif, and although clouds were piling up on its southern flanks, the north side remained clear. I was very impressed by the seracs tumbling off the Dalton Dome and a new perspective on the peaks around Garibaldi Lake. By the time we reached the upper glacier, the clouds had risen until they were practically sloshing around our feet, and although peaks were peeking fetchingly out above the clouds, we were exhausted, behind schedule, and I was pretty sure the summit would be socked in soon too. This was roughly the spot where our previous attempt had been turned around, too, on a traverse of the Neve. On that morning in 2017, we took a few steps out of camp, watched an avalanche come down the face, and said, “Nah.” 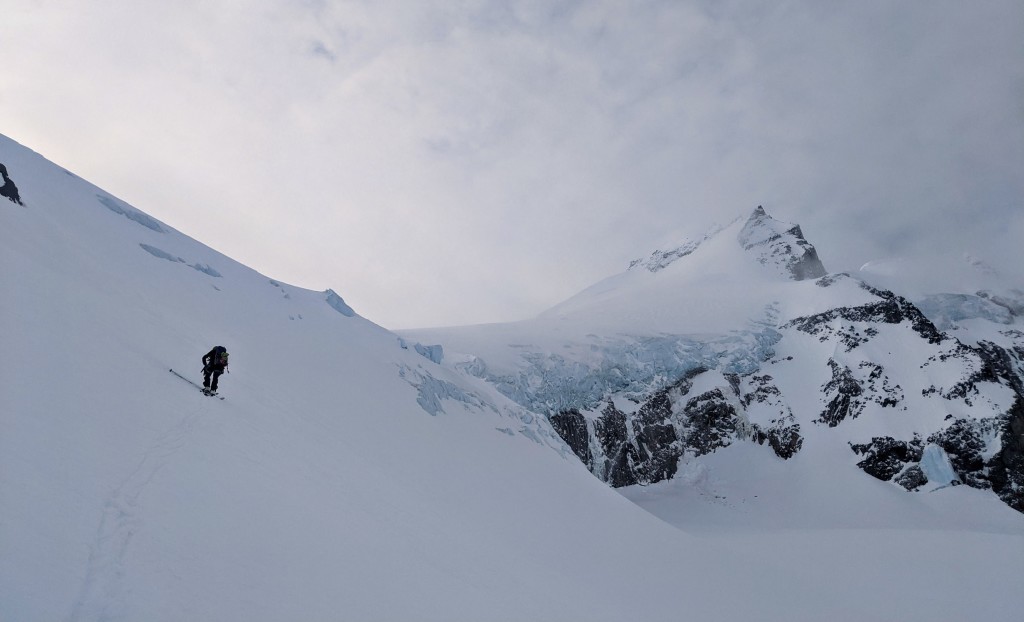 Cool ice cliffs beside the “Warren nose” (more later about the nose).

But these days, Birgit does something odd. Rather than getting more tired and slower as a trip progresses, she starts speeding up. So she set off up the summit tower and I trudged after her. I was very happy to rest out of the way (for the sake of avalanches) as she put switchbacks up the top of the face, then bootpacked up a small couloir to the summit ridge. Unfortunately, at exactly this moment, the clouds swirled around me and I lost visibility. I followed B grudgingly up to the summit ridge—-which was still above them! We were standing at the top of the little couloir in the sun, looking out at the Dalton Dome and Atwell, and a sea of fluffy clouds. There was a sound like heavy machinery that it took me a while to understand. It was the WIND. It was howling over the ridge as we bootpacked to the summit, blowing golf-ball-sized chunks of rime off the rock, and nearly knocking us off balance. Very uncomfortable. 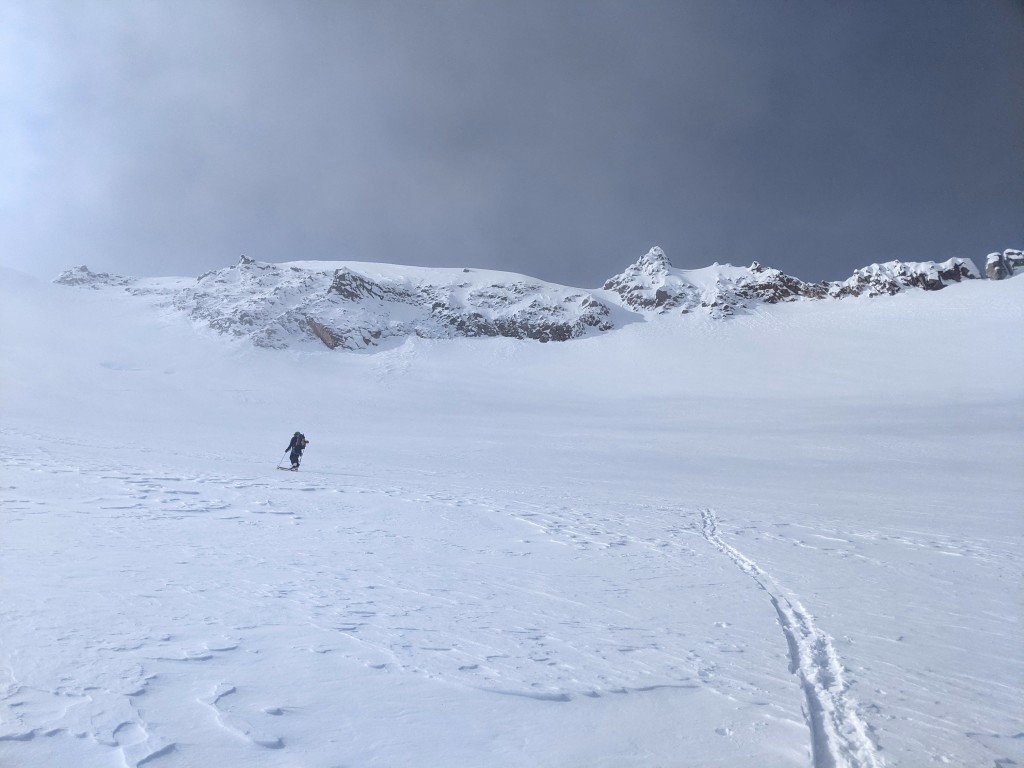 Skinning up the summit tower as the clouds roll in. 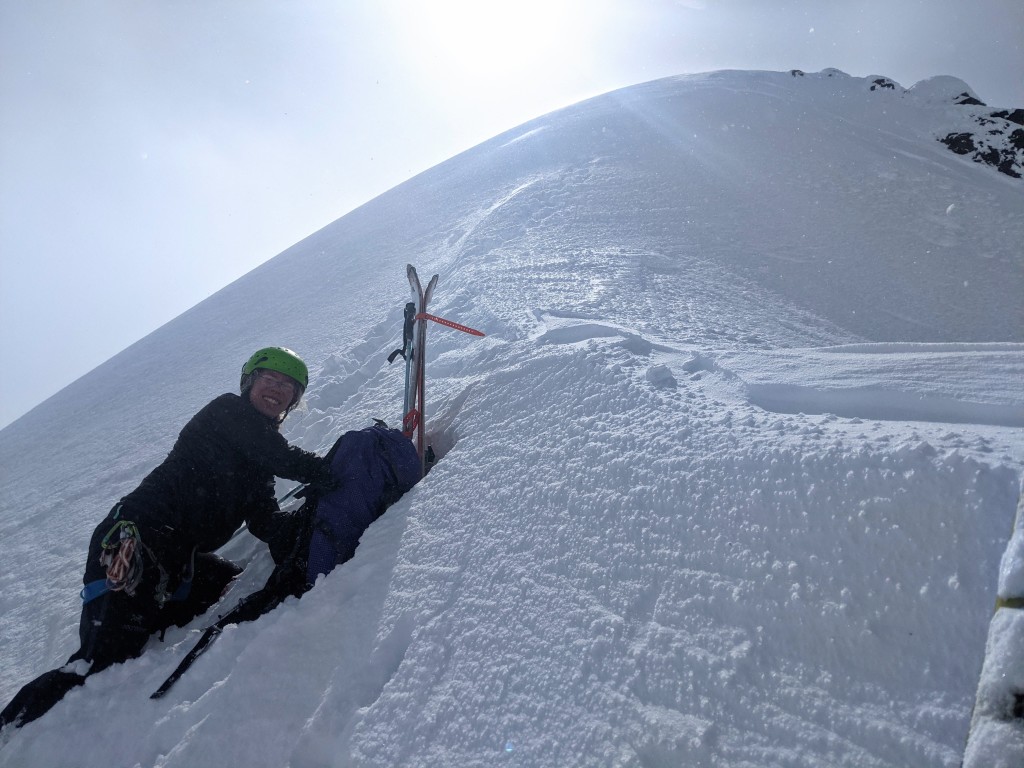 Birgit hiding from the wind at the top of the little couloir. 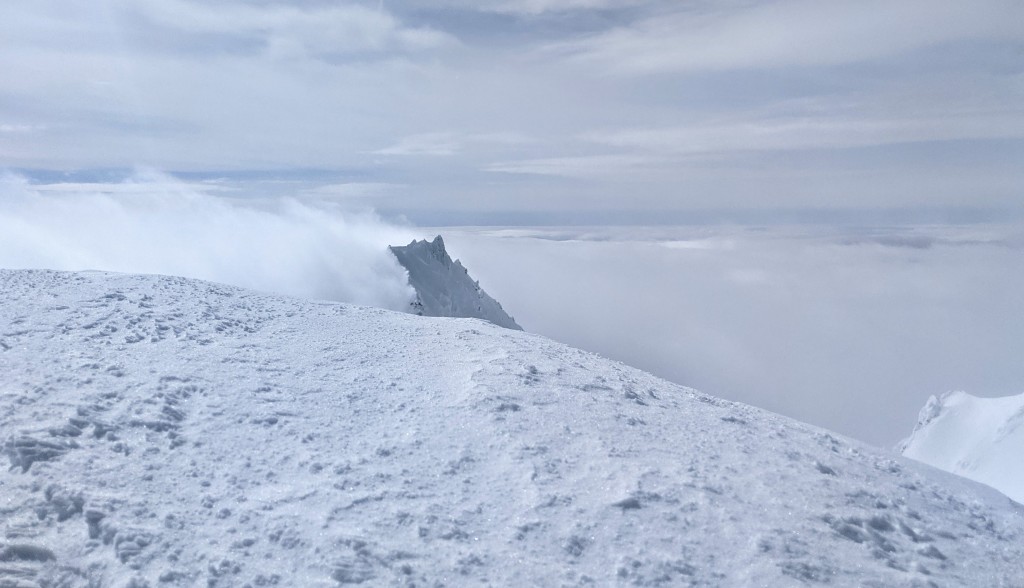 We only took this one crappy picture from the actual summit. Too rushed…

We skied back down the little couloir, out of the wind, and into a whiteout again, following our uptrack carefully. When we made it down to the Warren Glacier the skies cleared again and we had a snack and a rest, then began the slog back out Brohm Ridge and back into the ping pong ball. Much of the time we couldn’t see anything farther than our skis, and I’m sure we added a few detours by mistake on the way home. 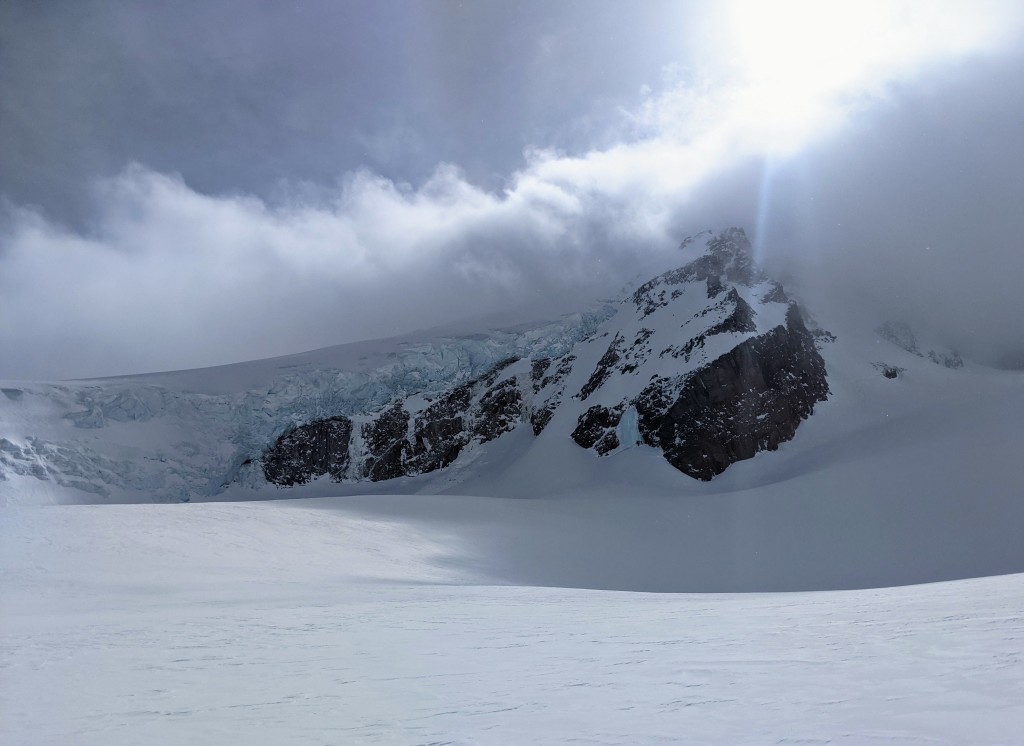 The storm rolls over Garibaldi for good. After this it was almost all a whiteout

It was very satisfying to finally go to Mt. Garibaldi. I’m not sure you can have writer’s block about a mountain, but I think I had skier’s block. The north face always looked too imposing, even though many friends reassured me it was much mellower than it looked. And then the idea of summiting as part of a queue of climbers, like Everest, wasn’t appealing because the mountain feels so iconic and, irrationally, I wanted the trip to be special somehow. Still, from a safety perspective I think that our two-person trip before a storm was a stretch. Given the benign avalanche forecast, and if we had set a turn-around time, I think it would have been safe enough. But if, during the descent from the summit tower, one of us had been injured, there would have been no chance of a rescue in the storm, and a 1:1 injured-to-healthy ratio is not great for doing first aid, moving onto mellow terrain, and building some kind of shelter. Anyway, next time we’ll set an early turn-around time or go with more people. 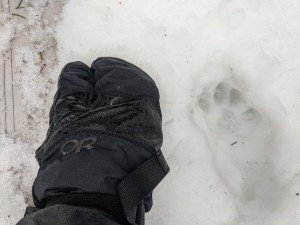 Some notes on the route

The Brohm Ridge pinnacle: Bivouac just says “continue along the top of Brohm Ridge”. Baldwin says the ridge is “open and scenic” but gives no particular directions. Around 1920 m on the ridge, just before it connects to the Warren Glacier, there is a dramatic, slightly exposed, rocky pinnacle. Based on GPS tracks and route descriptions, some people ski along the ridge crest, avoiding the cornice on one side, the dropoff on the other, and struggle up and over the pinnacle. On the other hand, some people drop a tiny bit of elevation on the mellow N side of the ridge, contour under the pinnacle on a bench, and then walk up a gentle slope to the glacier. I think the contouring people are onto something.

The Warren nose: To climb from the Warren Glacier to the North Pitt Glacier, Baldwin recommends an “indistinct nose”, which I think is near 49.8607, -123.0025 (based on GPS tracks, the terrain we saw, and the map). From what we saw, this nose is one of the steepest parts of the trip, summit included, and it was a pain to put a skin track up it. Historical satellite imagery shows that the glacier has receded here since the publication of the 3rd edition of Baldwin’s book, so it’s possible the nose is steeper than it used to be. We cut through an obvious rock band on the SW of the nose, which was ok, but I wonder whether there might be a mellower (though more crevassed) route further around to the S. 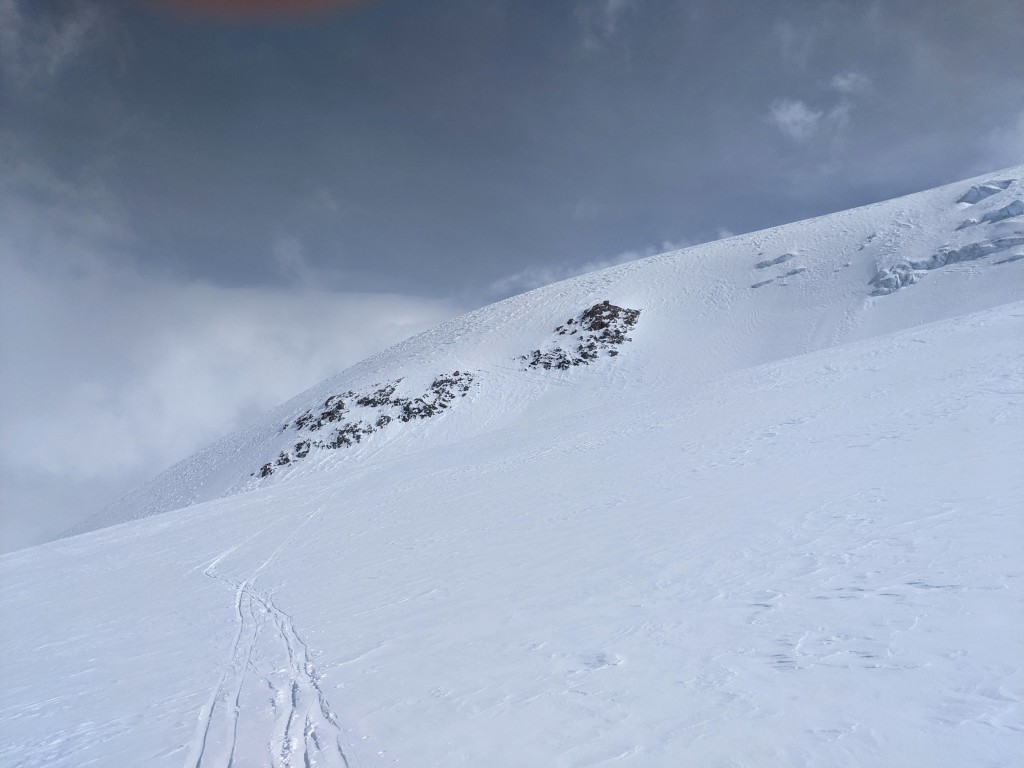 The two rock bands we skied between on the Warren nose

The summit tower: People refer to the NE face of Garibaldi as though it’s a single route, but in reality there are some variations—and this causes confusion. The white dashed line that I’ve drawn on Alberto Contreras-Sanz’s old photo of the summit tower, below, is the bergschrund, which can be a major obstacle. Some people take the blue route, and some people take the yellow route, and different route descriptions recommend different things (there are other variations too, but I don’t know much about them). We took the yellow route: the little couloir was 40-45 degrees for 40 m or so, and then the bootpack along the summit ridge was straightforward (distance 150 m). I’m told the blue route is roughly the same angle, but slightly more direct. The difference is the bergschrund: during ski season, it is often only partially bridged. I believe that the right side is usually bridged sooner than the left side, possibly because it receives more wind-deposited snow. All this to say, there are two routes, so if only one of them requires a bootpack above a gaping bergschrund or across a sketchy sagging snow bridge, you’ll know which one to choose. Based on discussions I’ve overheard, I suspect people sometimes locate the open bergschrund and climb above that, using it as a signpost on the route to the summit. Oops.