The first thing is Stats: 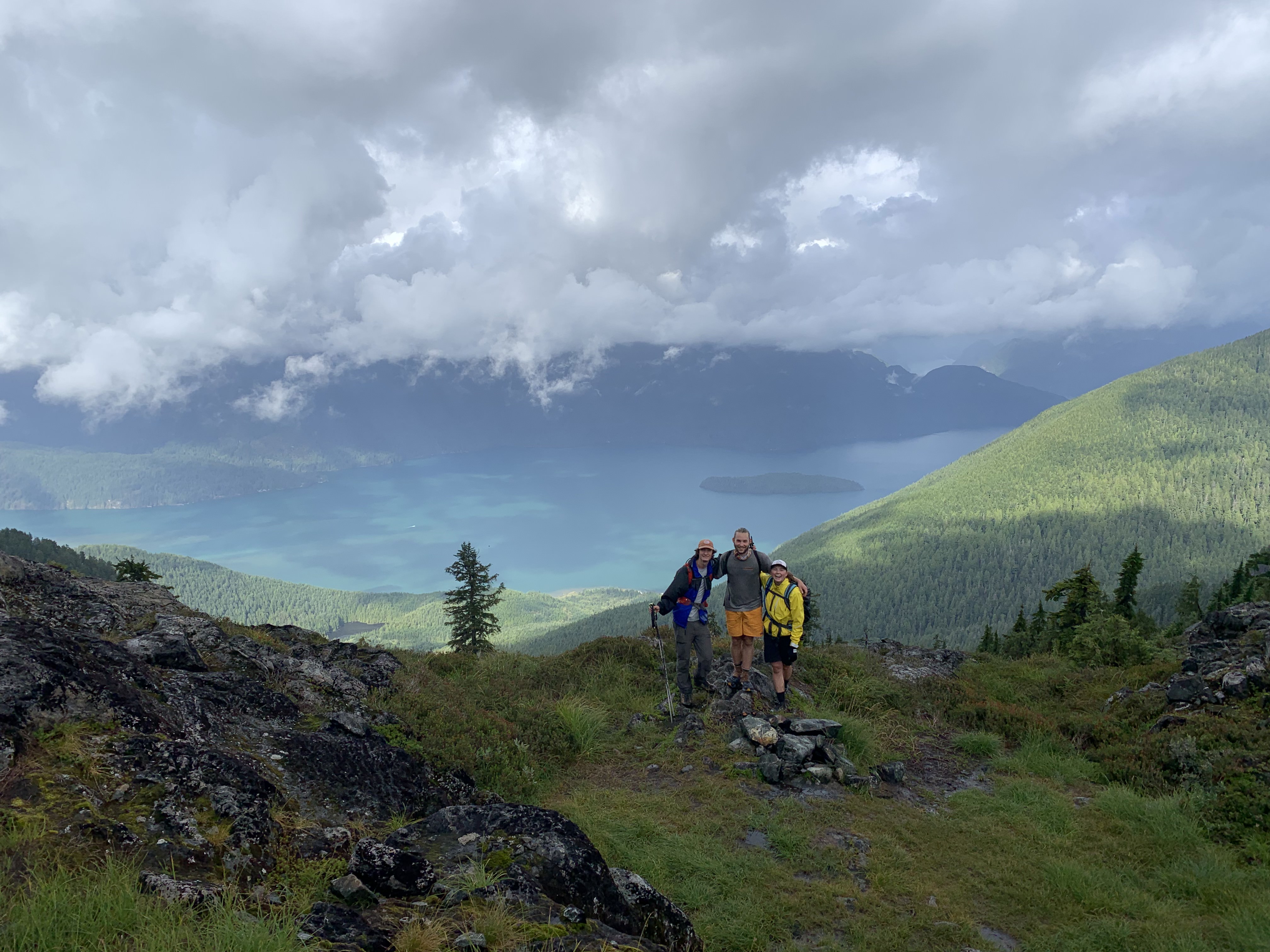 We planned to start at 8am, completing the hike in 8-9 hours (5 hours up, 4 hours down), excepting heavy shower starting at 1pm, with summit temperature range of 1-3C.

The actual trip starts at 8:20am (I was late), finished in 9 hours, with 4:44 hours up, and the rest down, with about 30 minutes rest time in total. The weather forecast was completely off (more in that later), summit temperature of 18C in a complete white-out.

We started in a nice 18-20C, very humid temperature. Most of us are well geared, but unfortunately, two of us were not wearing waterproof shoes which turned out to be a bit of a problem. The trail was wet, and some part of the trail… what can I say… it’s more like a creek than a trail. For the first half (before Alder Flat), there are some small creeks cutting through the trails, and they grown wider throughout the day. There is a wide creek at Alder Flat, and I can imagine it becomes hard to cross as the rain season goes on. We didn’t take any pictures for the first half of the trail, as during most of the ascent, we were covered in white-out until the ridge hike. 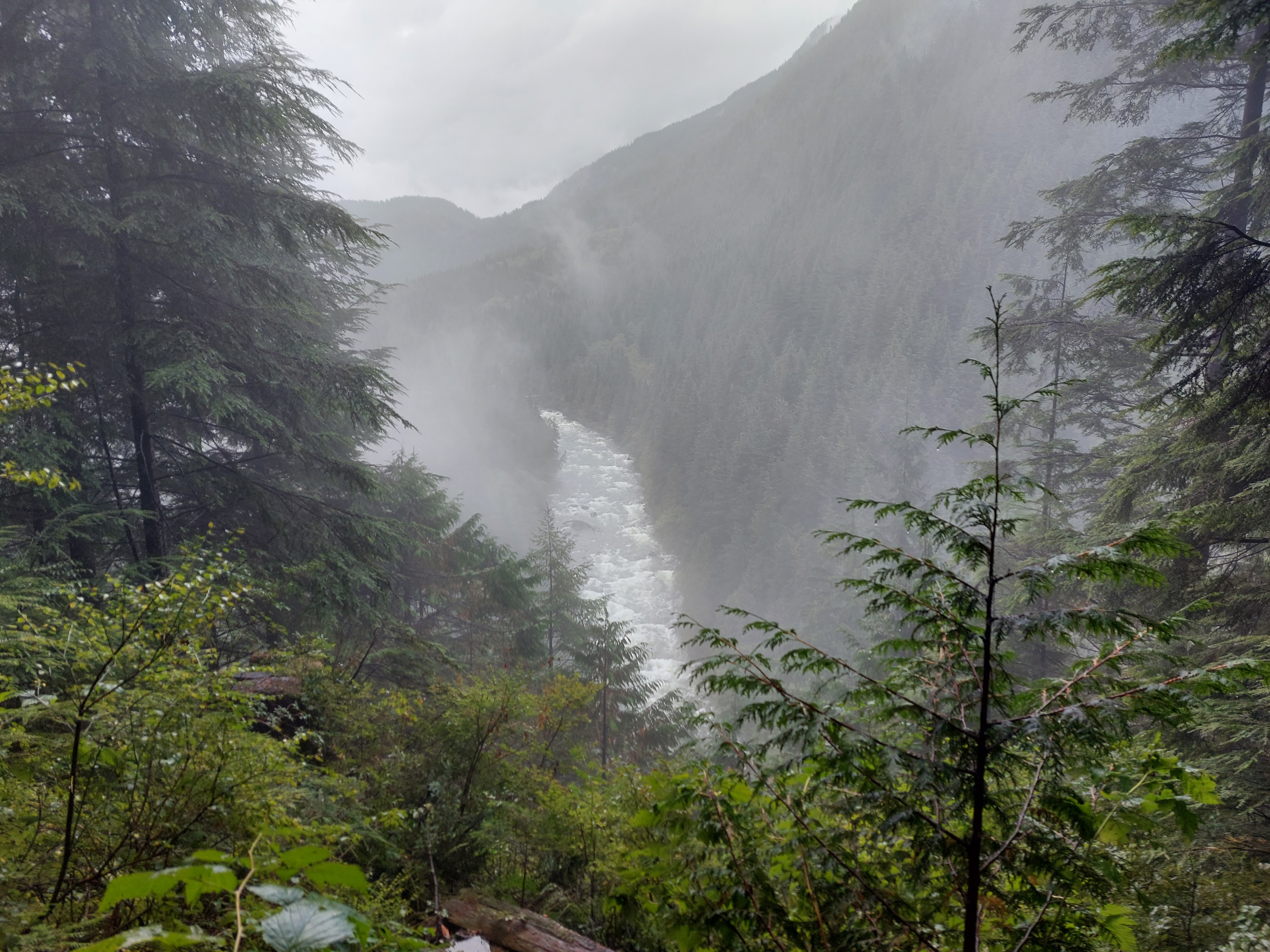 The grind up the ridge was pretty relaxing. Since we wouldn’t see much in the white-out, we spent most of the time chatting, getting to know each other, and stayed focus on the hike at a constant pace.

The Golden Ears finally decided to reward us with some views, and with all the mountains and lakes covered in clouds, it appeared more mysterious than its summer day self. The northeast side of the mountain is completely covered in the cloud (bye Mt. Robie Reid), and the southwest side is how we received Panorama ridge at a 50% discount, but we gladly took it. The air is very refreshing, and the temperature was not too warm or cold. We took a short lunch break at the emergency shelter, and as the temperature declined all the way to 11C, we decide to push for the summit by leaving all the backpacks behind. 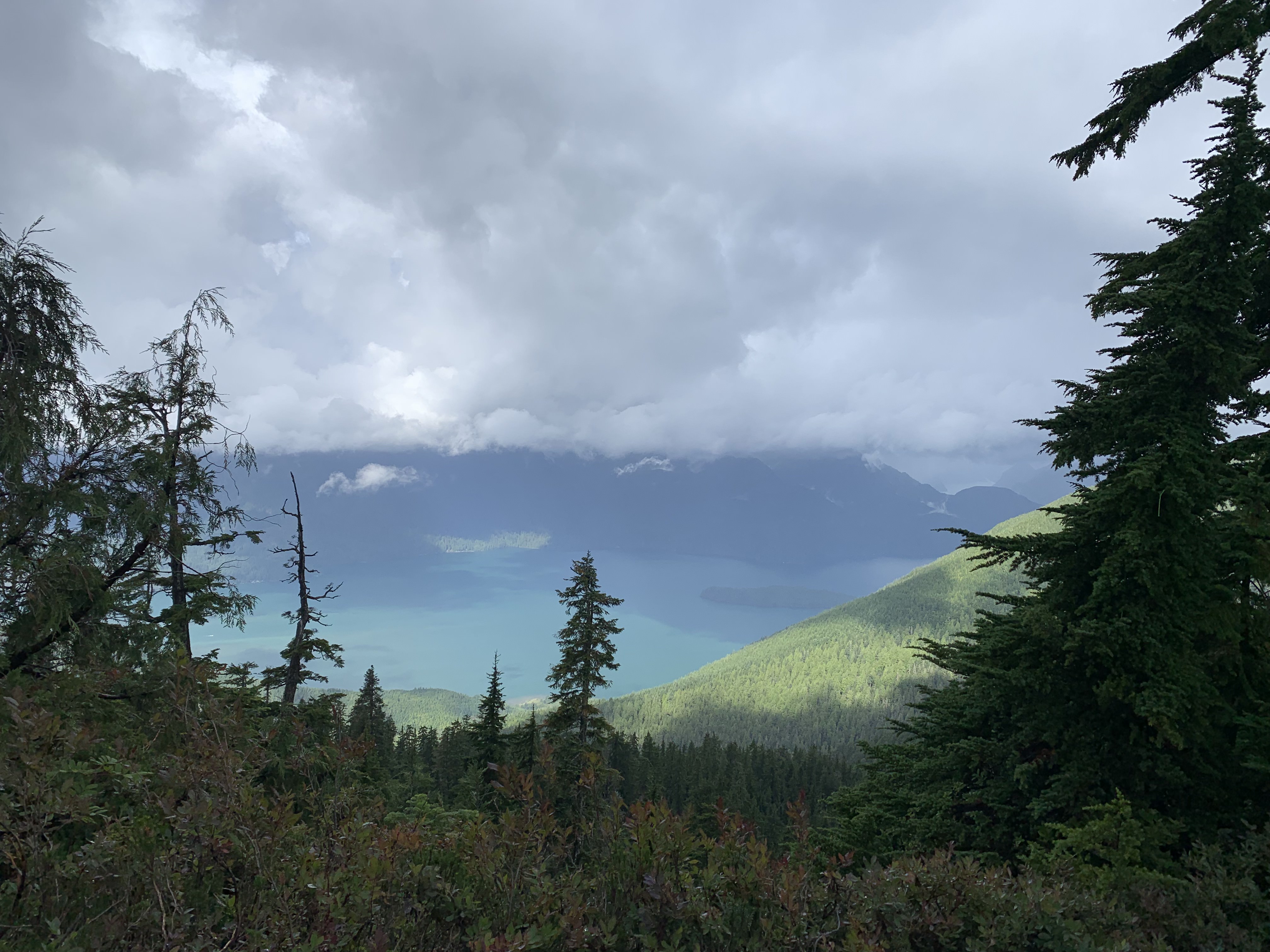 The summit hike is about 0.8-1km, and took about 45 minutes up, and probably a bit fast going down. It’s a class 3 hike that is very fun: sometimes a bit of climb, a bit of bushwacking, and there are multiple routes for up and down. We reached the summit in a warm white-out, not able to see anything. See video.

Since there is nothing to see, we head down in a rush, worrying that the rain will catch up to us. We had a bit of fun sliding off the snow patches. 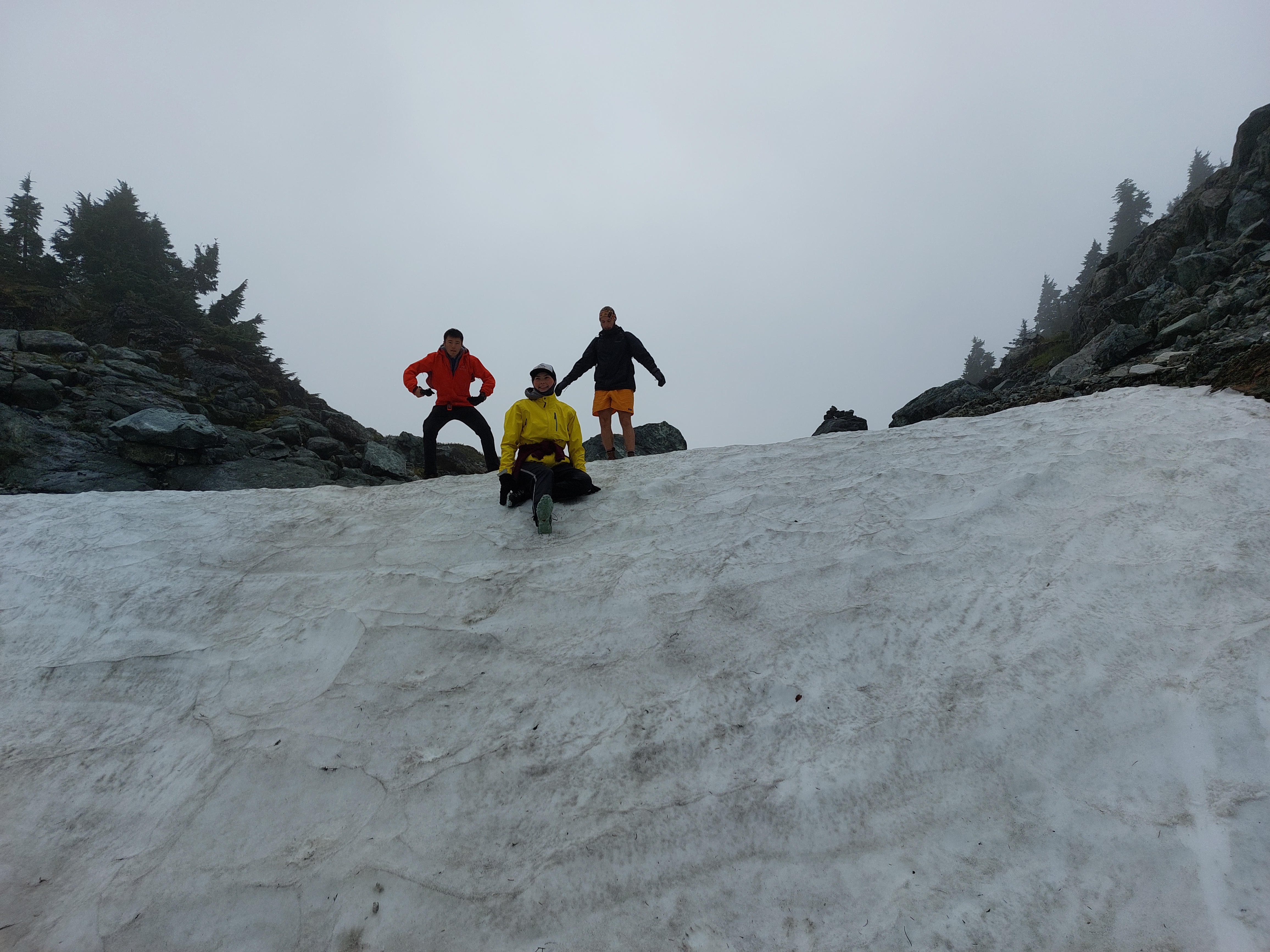 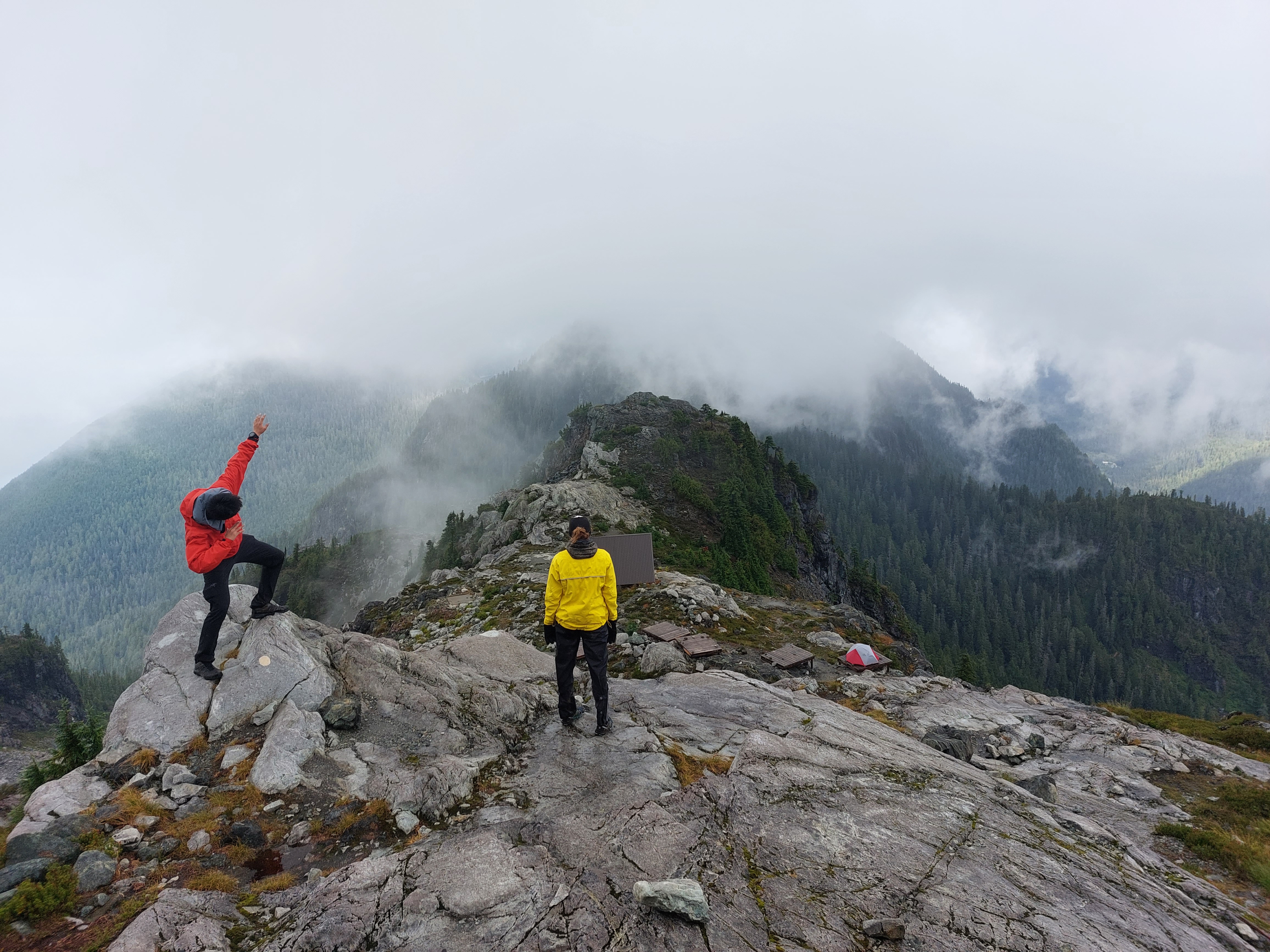 Just as we packed up again and were leaving from the Panorama Ridge, it started to rain, and all of a sudden, it started to hail! See video. It went on for a bit, completely caught us in surprise, and mixed with a bit of a shower, a closing thunder cloud, we ran off the Ridge into the forest. But to our surprise again, it was completely sunny under the white-out, and we got to see some good views of Golden Ears Peak on the way back! At the second half of the trail, we went for a bit of a trail run. It was still a bit rocky at the 3-6km mark, but the 0-3km section was a pleasure to run on. We completed the hike at around 5:30 pm, and the whole region was mopped by a thunderstorm shower in 2 hours.

(The exact same viewpoint of the Golden Creek, but without the fog!)

Huge thanks to Alex for driving everyone all the way from UBC to the trail!