Not Daugther Of Ice

I have been rock climbing for two years now, but before the Daugther of Ice trip was posted, I didn’t even know that ice climbing was something you could actually do – like for real. So after watching a few videos online, I was super stoked to try it. But if you know anything about Daugther of Ice, you know the trip fills up fast. This year the sign-up opened at 4am and… I didn’t get a spot. Luckily, Roan was organizing Not Daugther of Ice a few weeks later so I jumped at my second opportunity.

After all the organizing was done, we left Vancouver on Friday evening, more than ready to kick some ice. The stop-and-go Whistler traffic seemed endless, but nothing is infinite. We finally made it to Whistler where we were in much need of a Tim Hortons break.  Roan left with a box of hot chocolate powder, no one but him believed we could empty. We finally left and made our way to Marble Canyon, traveling the dreaded Duffy at night. When we arrived at 11pm-ish, we found the parking lot plowed and empty and set up camp right next to our car. Time to sleep? No! 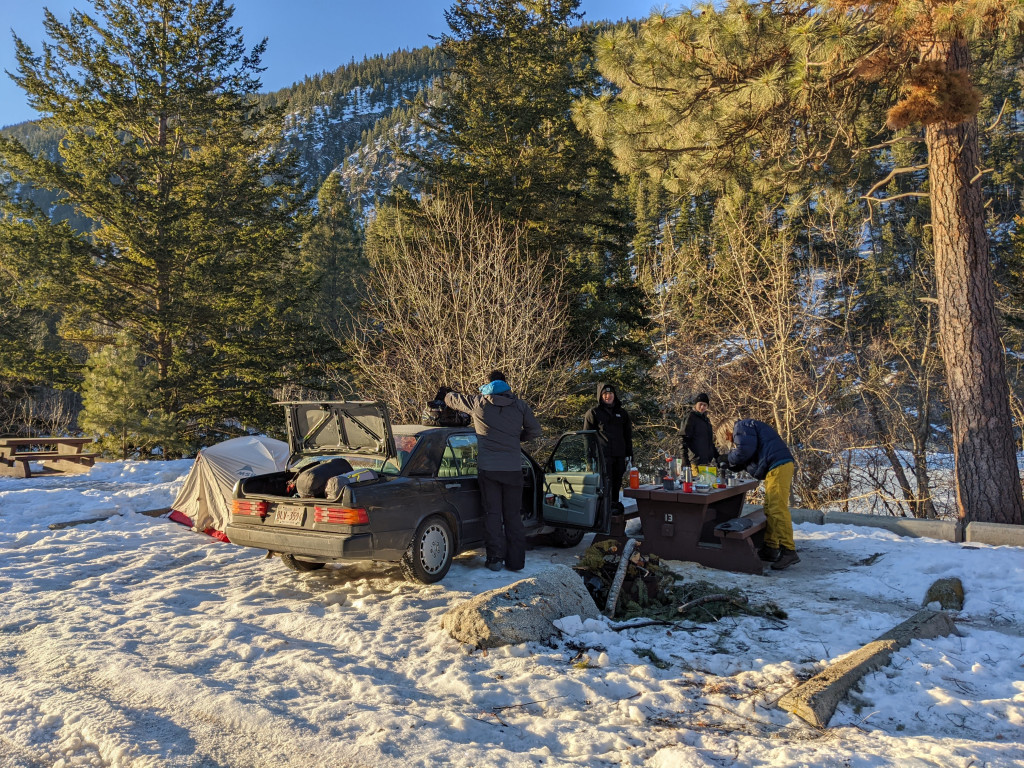 One half of our camp. By Felix.

There was still so much to do: Cooking dinner, waiting for the second car, worrying about when we should start worrying about the second car, and not wanting to drive 30 minutes to get cellphone service. Of course, the second car made it, and soon we were left with only one activity: Puzzling over the strange sounds coming from the lake/ice fall/forest direction. It took us a while to work out that it is probably the ice on the lake shifting and cracking, having a cold night after a rather warm week. Satisfied with our conclusion and not thinking too hard about the fact that we had to cross that lake in the morning, we went to bed.

Crossing the lakes to approach the waterfalls. You can already see them between the trees. By Felix.

We woke up to a sunny day and went straight to the icefall without any delay (just kidding, but I think we made it with less than 3 hours of faff!). Walking over the lake, we soon saw the waterfalls and a few people climbing it. Arriving there and standing at the bottom was so impressive! If I recall correctly, all routes were well over 30 meters. Off we went to scramble to the top and set up our anchors. After a little back and forth (and more faff) because of rope length, we were finally able to climb and it was awesome! 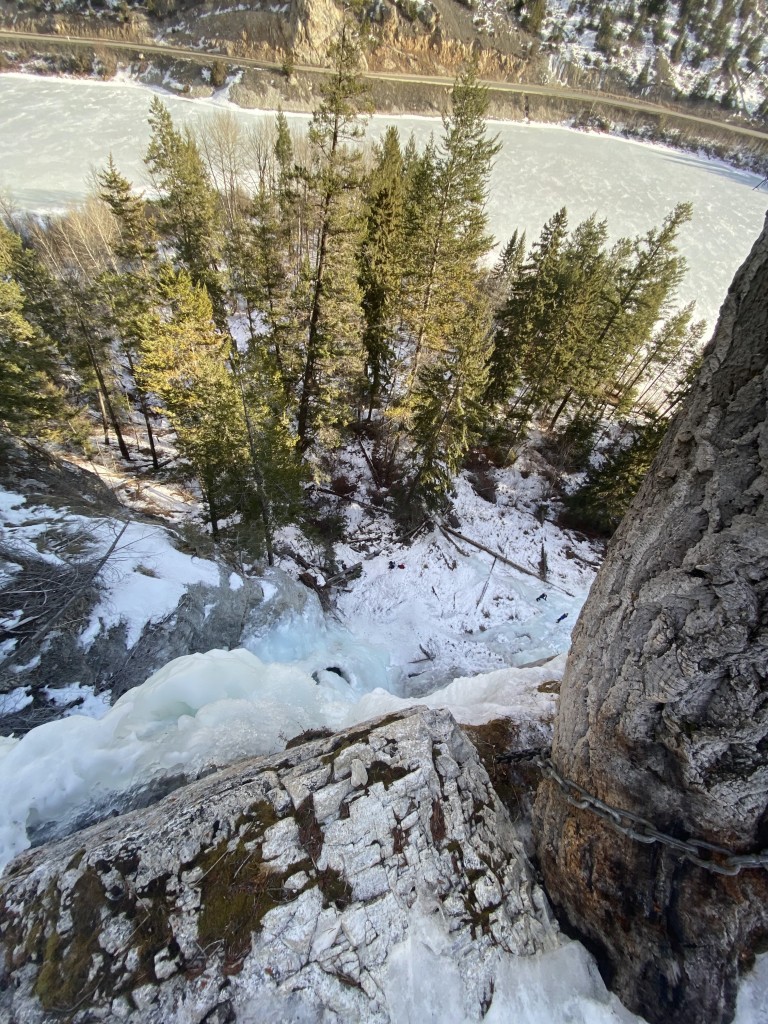 View from the top of IcyBC. By Fiona. 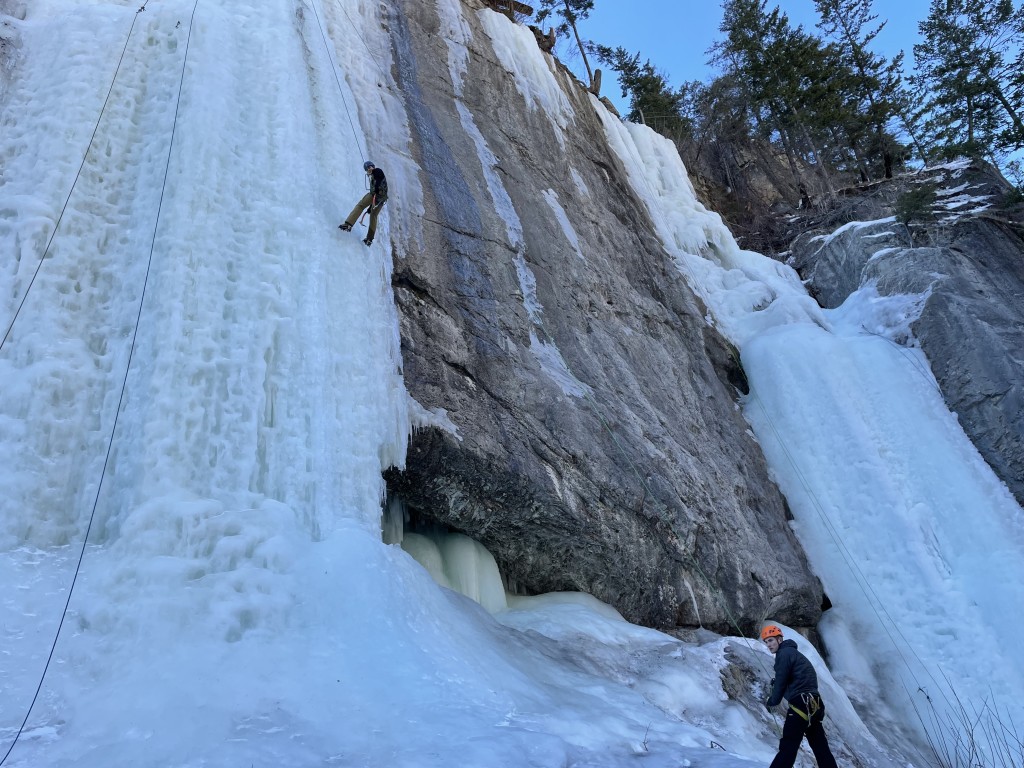 Fiona climbing some ice, belayed by Will. By Roan

The basic technique of ice climbing is really easy to pick up, but it’s really hard to apply. On my first try, I made it barely halfway up and I was kicking the ice three or four times for each step until I was convinced it was safe enough to stand. We climbed and practiced and tried the different routes all Saturday long. Will had impressively bad luck (and boots) and blew his crampons two or three times while climbing until Roan heroically took the bullet and switched boots with Will. Everything was going well and everyone had a great time climbing. I finally managed to complete the route I had to bail on during my first try. But, right as we were leaving the crag, the crampon struck again and took Roan for a slide down the ice. Luckily it was not too bad, but after a day on crampons, you really forget how slippery ice can be without them. 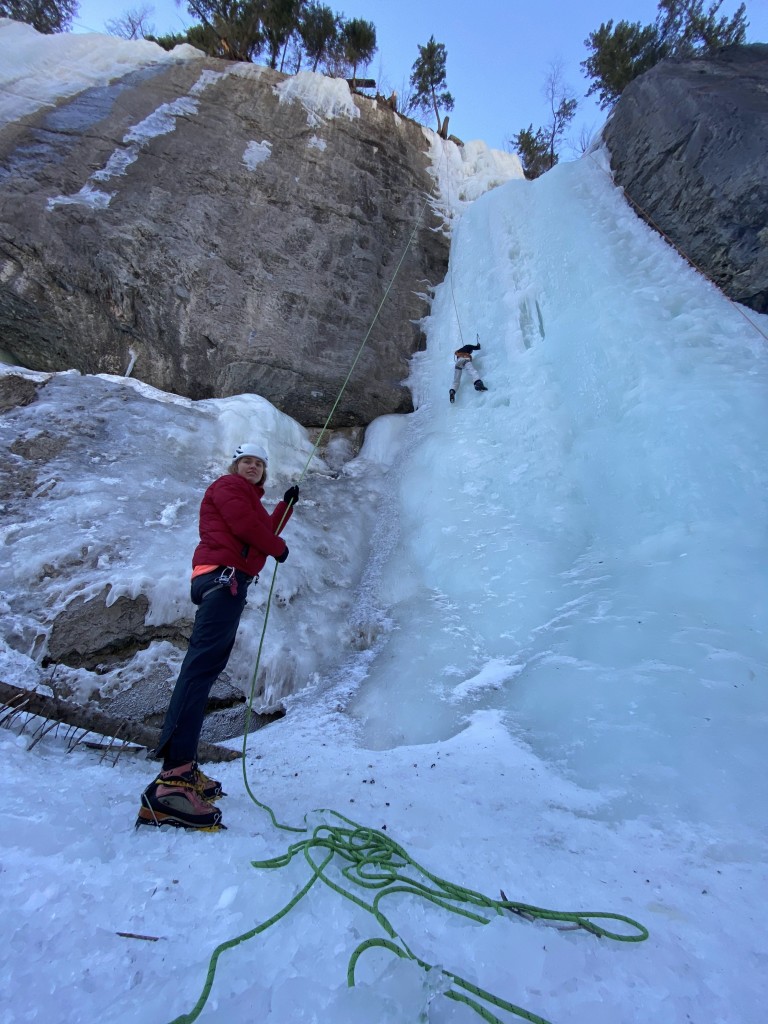 Me (Felix) on my way up IcyBC, belayed by Nina. By Fiona. 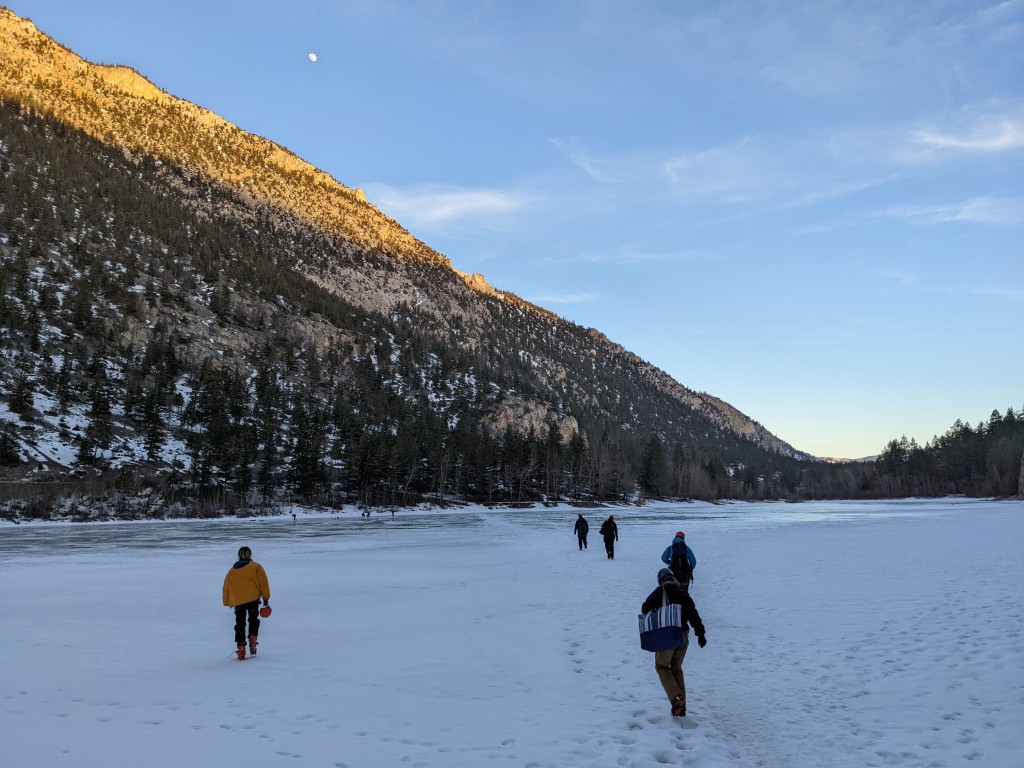 Back to camp after a long day of ice climbing. By Felix. 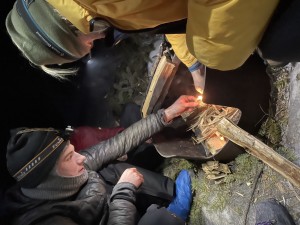 How many people does it take to light a fire? By Roan.

After the sunset, we had a lovely bonfire with beer, stupid stories, and tons of hot chocolate. Despite the initial skepticism, we finished our box of hot chocolate before we called it a night. The next day, just as sunny as the last, we went to the crag for a few hours before heading back to Vancouver. With our newly trained skills and slightly regenerated strength, the climbing was even better than Saturday. From the rightmost waterfall (IcyBC), we occasionally heard pieces of ice breaking and falling into the stream that developed behind it, and we were really glad that we went ice climbing this weekend, likely one of the last weekends of the season. 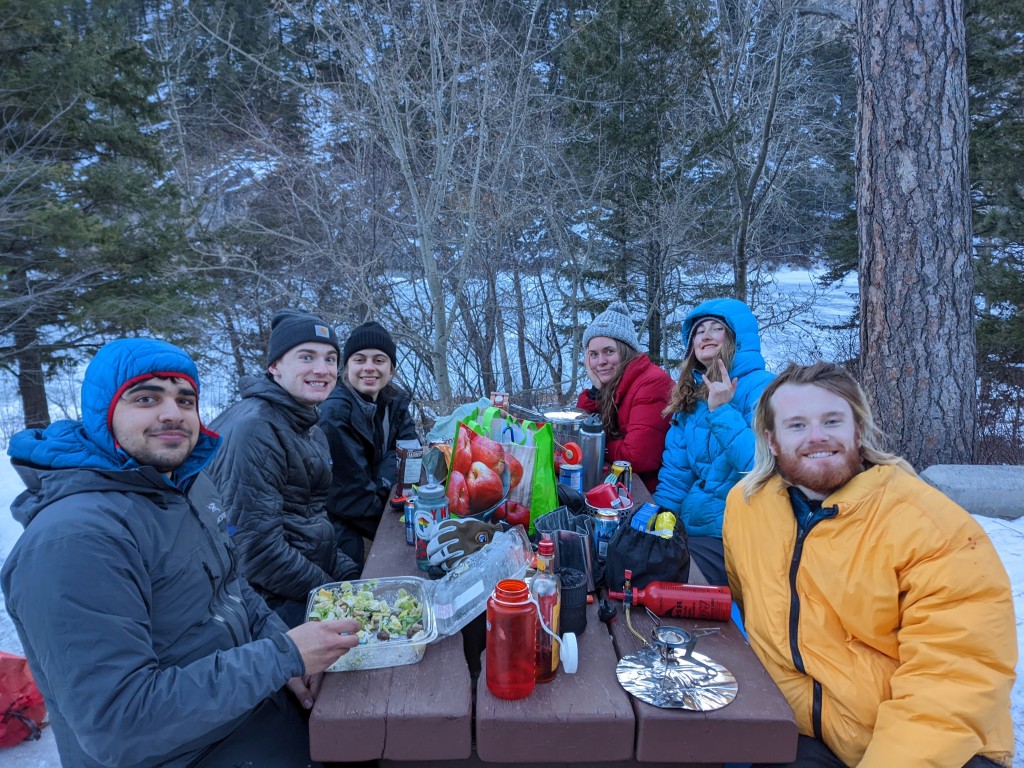