With exams over and my second year at UBC coming to a close, lately I’ve been reminiscing about the past seven months. It’s been a great year, coming out of Zoomiversity and back into the real world, with the requisite clubs, parties, and general tomfoolery. Among many others, a particularly fond memory was getting a spot on last fall’s Harrison Hut workhike to do trailwork, remove an old bridge, and replace a doorknob at the hut. Over the years I had pored over maps of BC and wondered about visiting the Meager Creek area. The massive landslide and subsequent closure had given the area a certain allure, and I wasn’t sure I’d ever get to visit. So, with that said, I made sure to nab a spot on this trip.

On a dark Friday night I was picked up by Anton Afanassiev and Anelia Mynzhassarovaafter spending the better part of a day packing. I think I had all of three minutes to myself before they arrived. Good thing I started packing early… or not? Perhaps the spare time made me feel empowered to faff it away. After picking up Hannah Bates, we hit the road for Pemberton and had a good time getting to know one another. My mom, being a mom, had baked many many cookies for the weekend, and so sharing was in order. We arrived at the first gate on the Lillooet FSR around midnight, but we were still the first ones there. Stretching from the car ride up as we set our tents up we wondered where the others could be. Eventually everyone made it, and we tried scaring them by jumping out from behind the car, but they were more confused than spooked by the spectacle of four VOCers crouching behind a car. We spent some time standing around chatting and getting to know people hitting the ground for some rest. 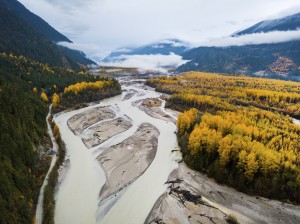 Base camp at the 23km gate. PC: Isaac Borrego

Waking up the next morning, we were greeted with the beautiful view which we had missed the night before: the Lillooet River, rimmed with deciduous trees at the peak of their fall colours, clouds swirling around the edges of the valley, obscuring the higher parts of the mountains. It smells like fall, damp and rotting leaves. Sogginess pervades. What will the day ahead hold? As we pack up our tents and eat breakfast, we organize into car groups for our “convoy” and set out past the gate. It all feels so regulated, maybe because it is. We are going into what, when I explained it to my family, my brother sarcastically referred to as ‘VIP backcountry’. After a much longer than expected drive up up up and back back back following the Lillooet River and then Meager Creek, marvelling at devastation of the landslide which still marks this area—and the precarious placement of the road daintily winding its way through it all—we found ourselves at the end of a road in the centre of a large cut block which spanned the hillside. Snow dusted the mountainside. 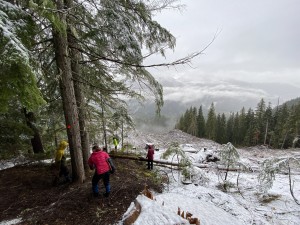 Setting out with some tools, we got to roughing in the bottom section of the Harrison Hut trail. After a couple hours of trail work, we returned to the cars with our tools and set out to the hut. Soon after hitting snow, we soon went from slipping and sliding on snow here and there, to post-holing and sinking to our calves to the point of exhaustion. I had debated leaving snowshoes behind for this trip; I’m glad I decided not to. The few of us who had brought snowshoes were elevated to near-celebrity status (or, at least, it felt that way) as we broke trail. I must admit, this was kind of cool, maybe for the first hour or so, to be among the trail-breaking snowshoe-having heroes, but it got old pretty quickly after that. By the end, the going got to be rather miserable and a lot of time was spent wishing for the whole ordeal to be over and for the hut to appear. At some point it eventually did, to everybody’s relief.

Also, it was winter? I think we were all a little disoriented by just how snowy it was.

At this point, I think I ought to mention Jeff Mottershead, crazy-man and VOCer extraordinaire who was quarterbacking the Barr Creek bridge removal project. As the rest of us worked on the lower trail, Jeff had been shuttling a cutting torch and all the associated paraphernalia back and forth to the bridge. On our way in to the hut, he was still hard at work cutting the old bridge into pieces. I wondered, as we approached the hut, where was he now? Would he come join us or spend the night further down? Time would tell. 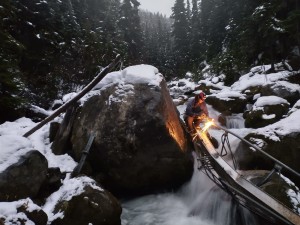 After getting into the hut and getting the stove burning, twenty or so soaked and exhausted VOCers got to the important business of sharing cheese and bread and cookies and tea and whiskey and beer whilst playing guitar and singing and talking with people who were becoming less and less like strangers by the minute. Stepping outside to collect water or go to the outhouse, I marvelled at the wintry stillness of where we were. A shock, when the thought of the orange leaves which were swirling around our cars as we drove up along the Lillooet crossed my mind. 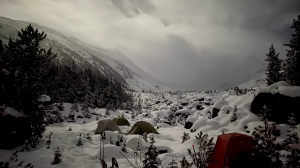 Later on in the night, Jeff burst into the hut after evidently getting a ton of work done on the bridge. We had long been settled into our eating and drinking and making merry; I felt a little guilty after that.

Close quarters in the hut. PC: ?

The hut was somewhat packed. I and a few others had to sleep on the main floor, under the table, on the table, beside the stove—all over. Those of us on the main floor ended up staying awake longer chatting for a while. When we did get to bed, I was out like a light, and despite our rather cramped quarters I didn’t wake up until the next morning. From what I heard, it was very warm in the loft and many had trouble sleeping. I counted myself lucky, then, to be down below.

Jeff was definitely the last to arrive at the hut and probably also the first to get up in the morning. The plan was to pack up and head down to the bridge, where we would try our best to be pack mules and haul out the bridge in pieces on our backs. Before we left, though, we made sure to see how many VOCers it could take to install a doorknob. This particular knob, of the fancy, high-quality industrial-grade variety, should last some while out there. I understand from some older VOCers that doorknobs are a bit of a perennial issue at the huts, with the various budget knobs falling apart not long after being installed. An FMCBC grant which allowed us to get extra bougie with the hardware was much appreciated. 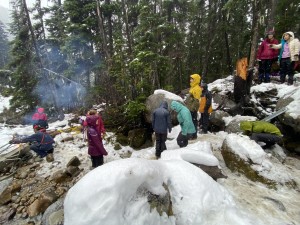 Making our way back down was a little better than the way up—a soaking and miserable ordeal. Hanging out loading our packs and faffing about at the bridge, it felt like we were close and would be at the cars in no time. Unfortunately, the trail seemed atypically longer on the way back, and I found myself wishing to be anywhere but here and now getting soaked while my extra loaded pack tugged on my back. Again, I felt myself wishing it was over, but relishing the simplicity of my troubles; wet feet, wet clothes, fogged up glasses, burdened pack. The company of others who were equally soaked and fatigued, the swapping of stories, the rush from having an extra what felt like seventy pounds on our backs and the satisfaction of having gone through this with a group of kind friendly souls made it feel all the more sweeter to eventually arrive at the cars. 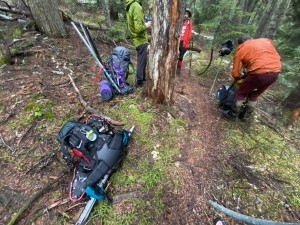 A message from the group’s inREACH alerted us that the rain was supposed to get severe, so we booked it out of the area before landslides made our trip any more fun than it already had been/needed to be. As an aside, it hadn’t really really rained since we first passed through the landslide zone, and yet there were many basketball-sized and larger rocks littering the road, little more than twenty-four hours later. I thought to myself, a little pensively, about what might happen if one of these rocks hit the roof of a car. Perhaps the closure is not such a bad thing. Thankfully, no rocks fell on our heads and I soon moved on to other things to think about as we all started to warm up and began talking again. 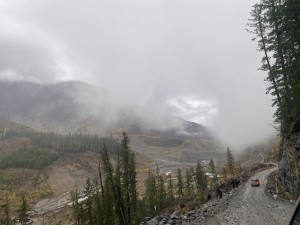 Anton, as our driver, made the executive decision that we go to McDonalds in Pemberton for food. It would not typically be my first choice, but I had to oblige. After a couple of unforgettable days in the backcountry occasionally punctuated with pining for civilization, I figured I deserved it. The fries were pretty good, anyhow.

One Response to Harrison Hut October 2021: Reminiscences From My Second First Year