Posted on September 15, 2022 by Duncan MacIntyre

At one point during the Mt. Elsay trip, someone mentioned that the newest VOC member writes the trip report. After some awkward staring and deliberation, we determined that I was the newest member, despite also being the trip leader. So here you go.

This hike began with a not-so-early start on the populous trail to Mt. Seymour. It got more interesting once we turned right towards Elsay Lake, leaving the humans (but not the bugs) behind. We found Wes’s Staircase aptly named. Then, once the “staircase” ended, the path became a narrow tunnel in the shoulder-high brambles. The thorns were redeemed by the delicious wild blueberries. Strangely enough, near the blueberries was bear poop.

After turning left at the junction to ascend Mt. Elsay, we stopped at a picturesque, muddy tarn with a bit of water in it. The mud exhibited some beautiful bear prints. There were even some itsy bitsy cub-sized prints. Naturally, this made the tarn the perfect place for lunch. For some reason, everyone thought it was funny when I suddenly pulled out four empty Nalgenes. I’m not sure why. Sure, the tarn had some sediment, but at least the water tasted good. Not as good as the coconut water, though, that was brought by two participants. (Supposedly the Official Coconut Water of the Olympic Games was the better one.)

Rejuvenated from lunch and ready to scramble, we took to the boulder field. It didn’t take long before one hiker said, “Hey, is that a bear?”

After scaring the bear away from our path (which we did so effectively that the people in back didn’t even get to see the bear), we continued up the boulder field along the route well-marked with cairns. Most of us followed the cairns, that is. Altai, in the lead, demonstrated an alternate route. When the alternate route ended in a berry-bush cul-de-sac, we encouraged him to retrace his steps to join us. Instead, we suddenly heard a loud thrashing sound as Altai demonstrated top-notch bushwhacking through the tall, thorny berry bushes. How did he do it? “The key is to ignore the pricks.”

At the top of the boulder field, we looked back over the hanging valley from which we had ascended with satisfaction and appreciation of beauty and also of schadenfreude. (Take that, boulder field! We’re going back a different way tomorrow.) We then turned north to make the final, steep, forested ascent to the summit, perhaps the steepest part of the hike. The path would have been very treacherous in wet conditions, but on our dry day, it was a fun all-limbs workout.

We were surprised to find a small pond near the peak (from which we filled our water bottles the next day). I wonder if this water survived because of the cool, late spring this year—I probably wouldn’t depend on it being there in a warmer August.

We were all smiles at the summit. The views were worth it. Who doesn’t want to look at the backside of Seymour?

We decided to camp right next to the summit cairn and cook atop a nearby precipice overlooking Vancouver. After dinner, we erected a specimen bear-hang between a tree and part of a dead stump that looked in danger of breaking off.

The best part of the trip was sleeping atop a mountain. We carefully followed Sasha’s rule that “you have to see five shooting stars before going to sleep” even as we watched a brawling thunderstorm to the north. According to someone’s phone, which had service, the storm was north of Whistler—but it felt close somehow.

Several of us slept under the stars. Only some had bug nets. I envied them. I got many bites but not much sleep, probably due to a combination of the relentless buzzing sounds and also a fear of getting zapped while sleeping on the very top of a giant lighting-magnet.

The first day, most people had mostly type one fun.

We woke before sunrise. The others graciously tolerated my cooking faff before we abled down to the pool to top off our water bottles and make a relaxed 9:15 hiking start. After descending to the col above the boulder field, I said, “Congrats guys, the hardest part is behind us!” I was very wrong. As we soon discovered, the path that winds around the north part of Runner Peak and Seymour is nothing but ups and downs. We got lots of practice grabbing tree roots to lower ourselves backwards into valleys across which we could see ominously steep trails leading uphill again. It was fun.

Around the final quarter of our trip, we began to see other humans again, runners and walkers making for Runner Peak because Seymour was just too easy. Relieved to gain the main path, we finally retraced our steps down Mt. Seymour and walked down the dusty ski runs to the parking lot.

The second day, some people had some type two fun. They were mostly the people who ran out of water. Luckily, several participants were feeling benevolent and willing to share.

All told, Sasha and her Garmin walked 15.4 km with 1630 metres of elevation gain. The distances walked by the others are unknown. Certainly they gained more elevation than the 600 metres that the trip leader had scandalously promised in the trip description.

This was an excellent hike with pleasant vistas, a satisfying summit, and several kilometres of class two scrambling without exposure. Some said this is the kind of hike you do once. I am not one of them. 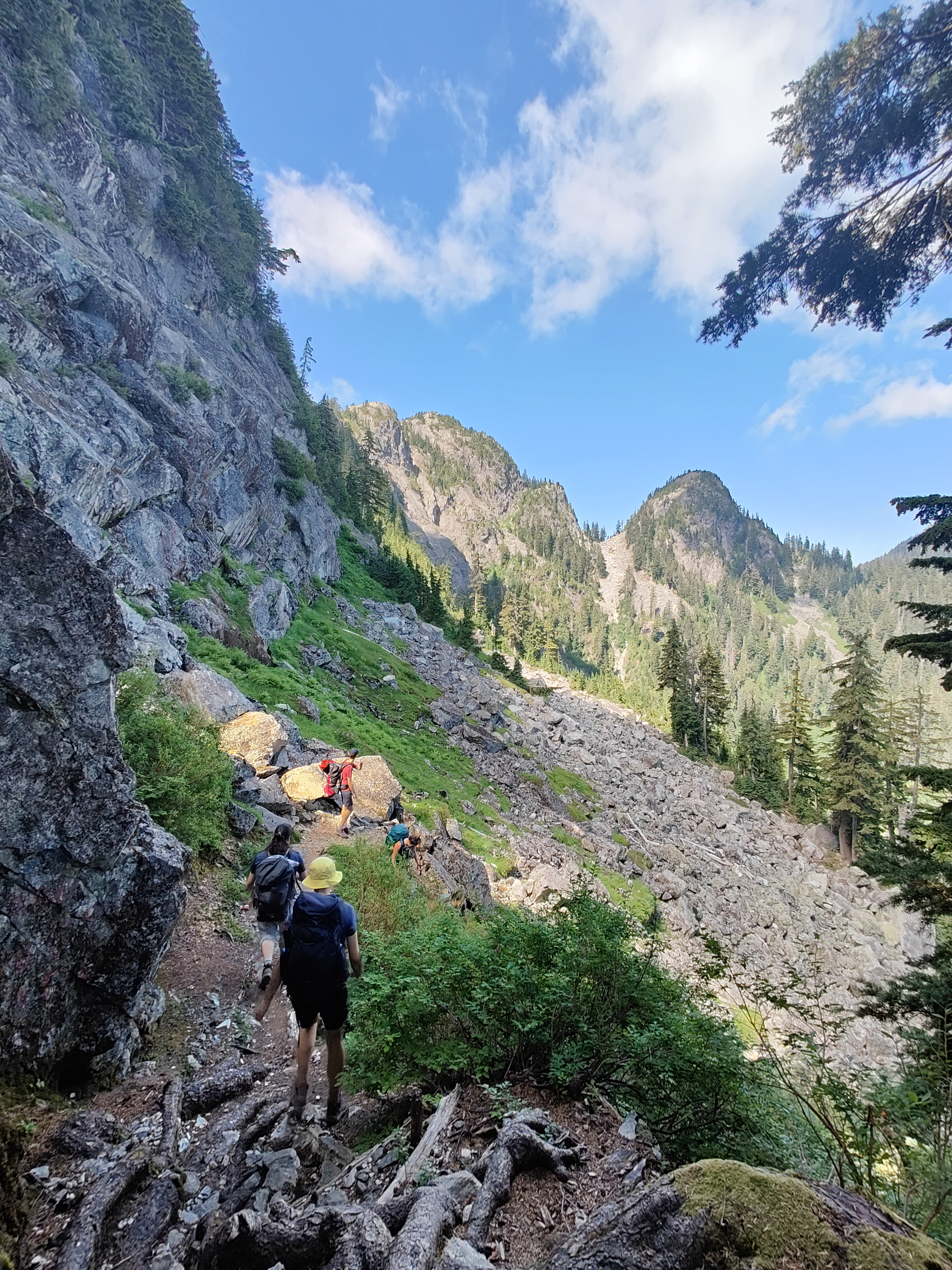 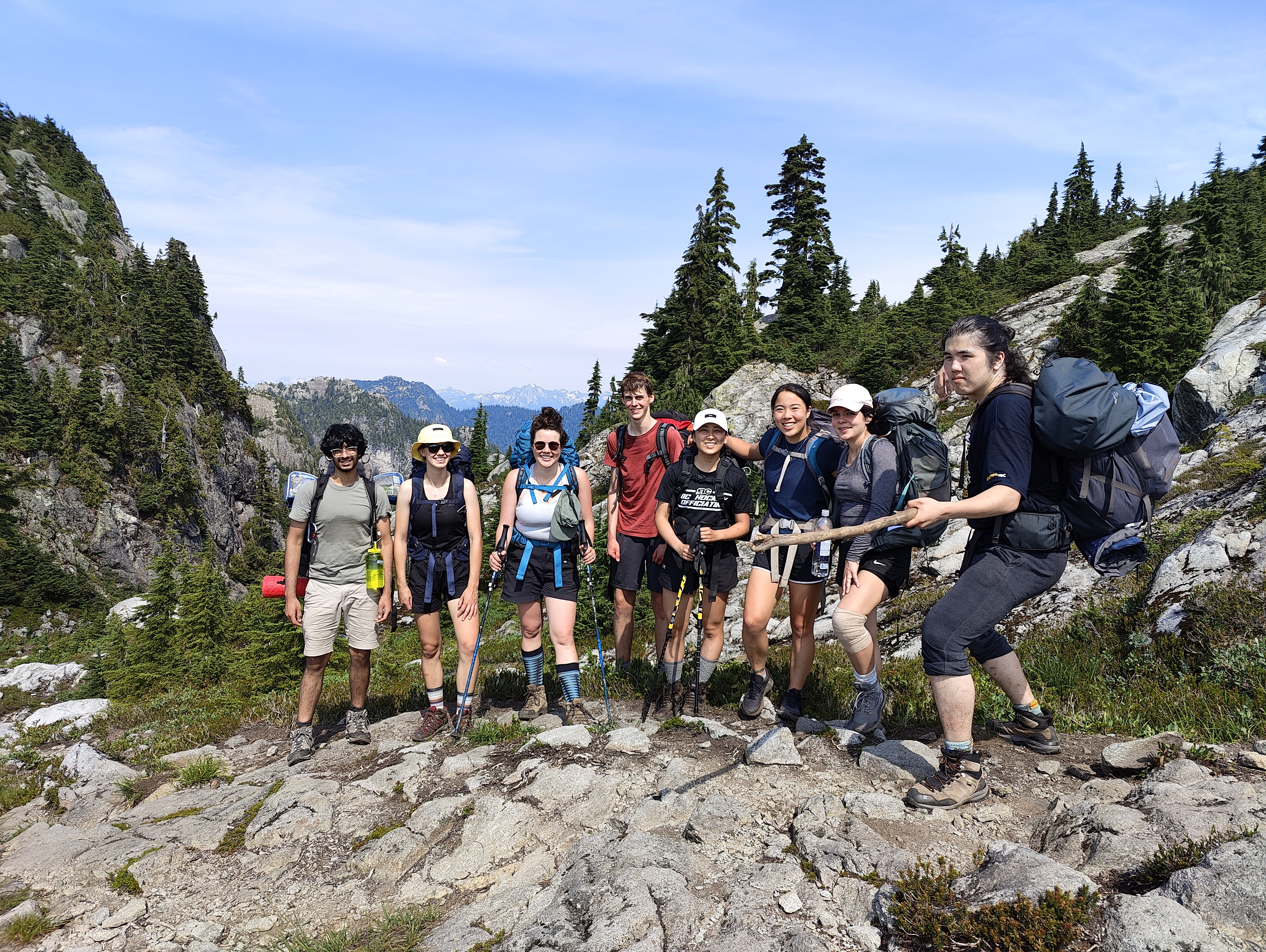 One Response to Ups, Downs, Rocks, and Stars: Overnight on Mt. Elsay