This past Labour Day, my brother Daniel and I set out for a last-hurrah adventure before school started again. Living on the North Shore, we set our sights on an objective (or two) close to home which could be done entirely on foot–yay for self-propulsion!

Hanes Valley and Crown Mountain are two big objectives which many will link up for a giant day, before taking the Grouse Mountain skyride back to a shuttled vehicle. We thought that it would be lame to involve cars when we were so close to home, so we opted to tack on the enigmatic Erik the Red trail onto our itinerary and pass over Mount Fromme to get back home to Lynn Valley.

We set out from our house at 5:00am, jogging up Lynn Valley Road and then the Cedar Mills/Headwaters trail… After a couple weeks without early-morning starts it was weird to be out with only stars to greet us. By the time we got to Norvan Falls though, we were walking through a lush rainforest, the damp vegetation glistening in the soft morning light. 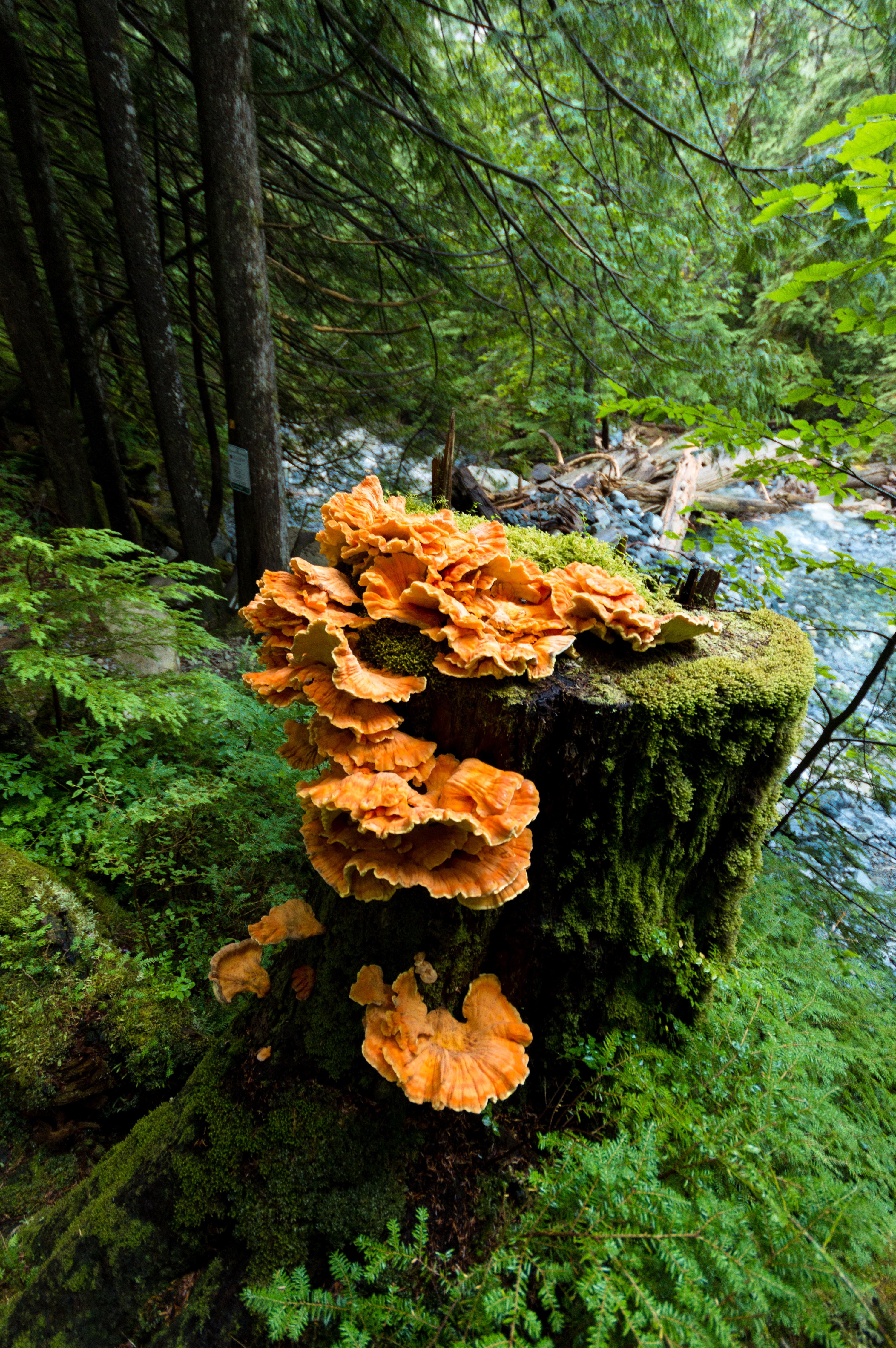 You seem like a fun guy! (…I’ll see myself out now)

After crossing the suspension bridge at Norvan Falls the trail gets less maintained, and we met some friends along the way: some funky fungi and hoppy frogs which were probably surprised to see us so early in the day… We forded Lynn Creek and continued through the jungle until we saw some bits of snow showing through the trees, and soon the forest opened up for a view of Hanes Valley. The sides of the valley towered over us with wispy clouds hanging around the tops of Goat Ridge. A large snowbridge was still hanging around on the other side of the valley. We remarked that such a wild feeling place seems abnormal for the North Shore, even more so considering where we were just a few hours prior. 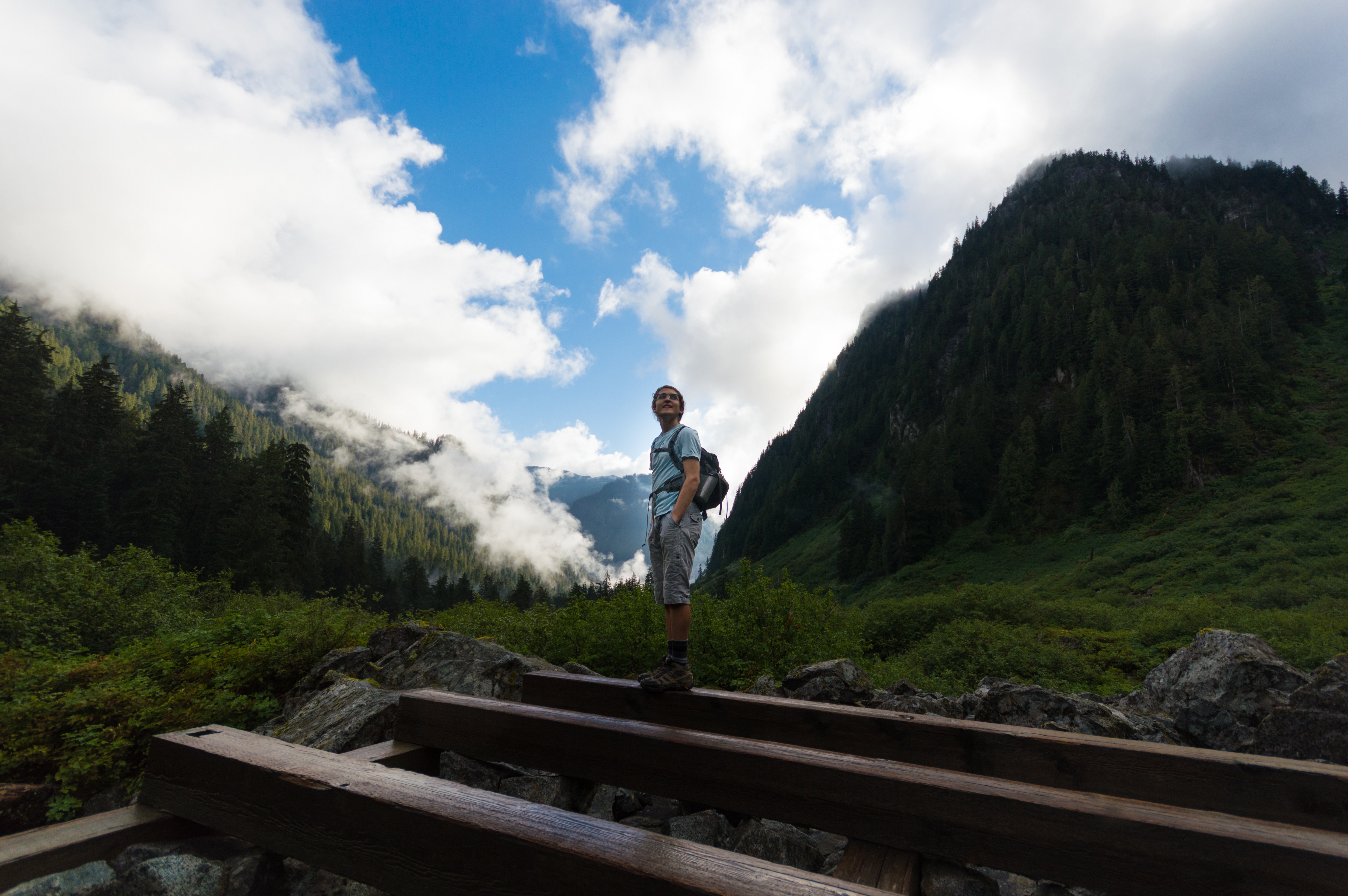 Surveying the landscape at the Hanes helipad.

Making our way up the infamous Hanes Valley boulder field was easy going compared to some other hikes*; most were solidly lodged between each other, and the trail was well marked. The scree slopes were annoying but were overcome soon enough. Near the top we put our heads down for a little too long and got misplaced into some brushy terrain at the base of a large pinnacle. Some backtracking had us back on the trail and up at Crown Pass in short order. A good reminder of how easy it is to get lost in this area, especially if visibility is bad. 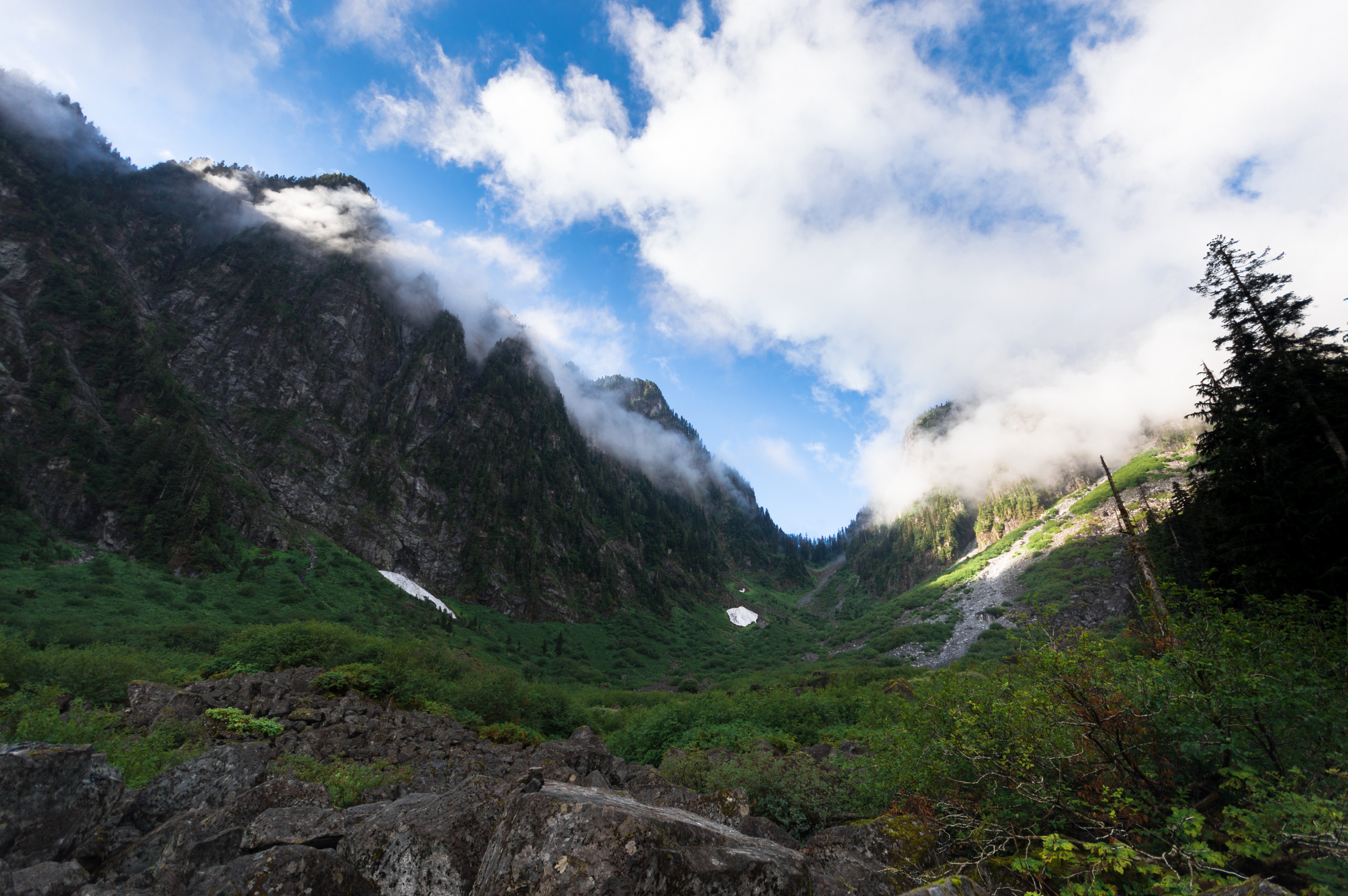 *For more on spooky boulders, there will have to be a report about doing Mount Currie in a day in August.

Once at Crown Pass, hikers are greeted with the choice of turning left and going towards the resort area at Grouse, or turning right and ascending about 400m to Crown Mountain. The trail up to Crown is frustrating. Steep, rooty, and eroded, one has to pay close attention to footing clambering up the slick path. There are some open scrambly traverses which get the spidey senses going, before arriving at the final ~30 metre push, which is highly exposed and rocky. Good nerves and purposeful foot placement are imperative here. 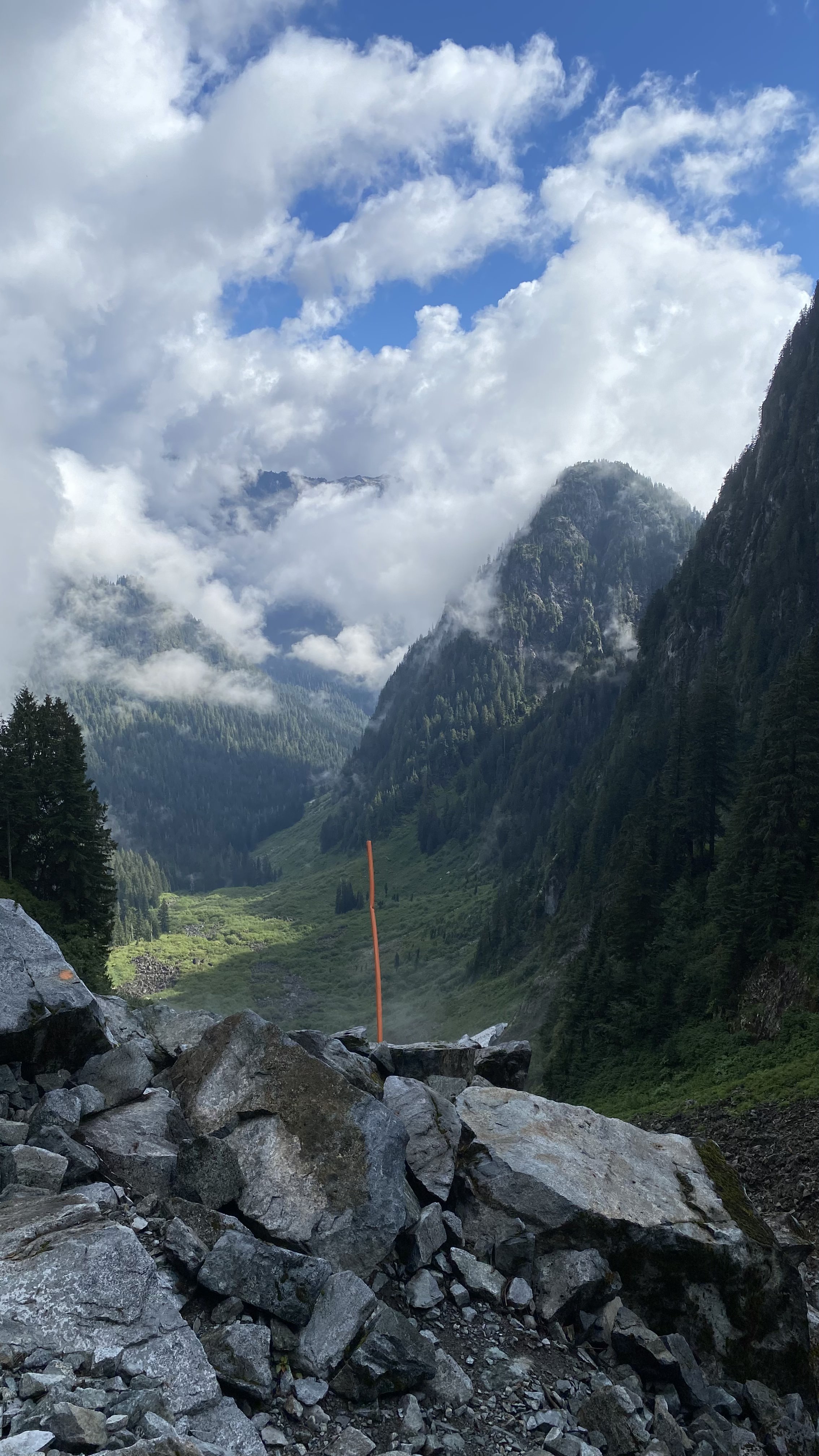 Peering back at Hanes Valley before ducking into the forest at Crown Pass.

Once on top, we met a hiker who had passed us on the way up. We had a nice chat with him before he headed down and we had the place to ourselves. Visibility was limited but we enjoyed watching the clouds whipping past us and a few ravens floating peaceably on the air currents. Vertigo was a challenge for this last bit. We were quite content sitting just (~5m) below the summit, not wanting to risk the precipitous falls on both sides of the final ascent, but as the clouds cleared out a bit we finally got the nerve to scramble up the summit. 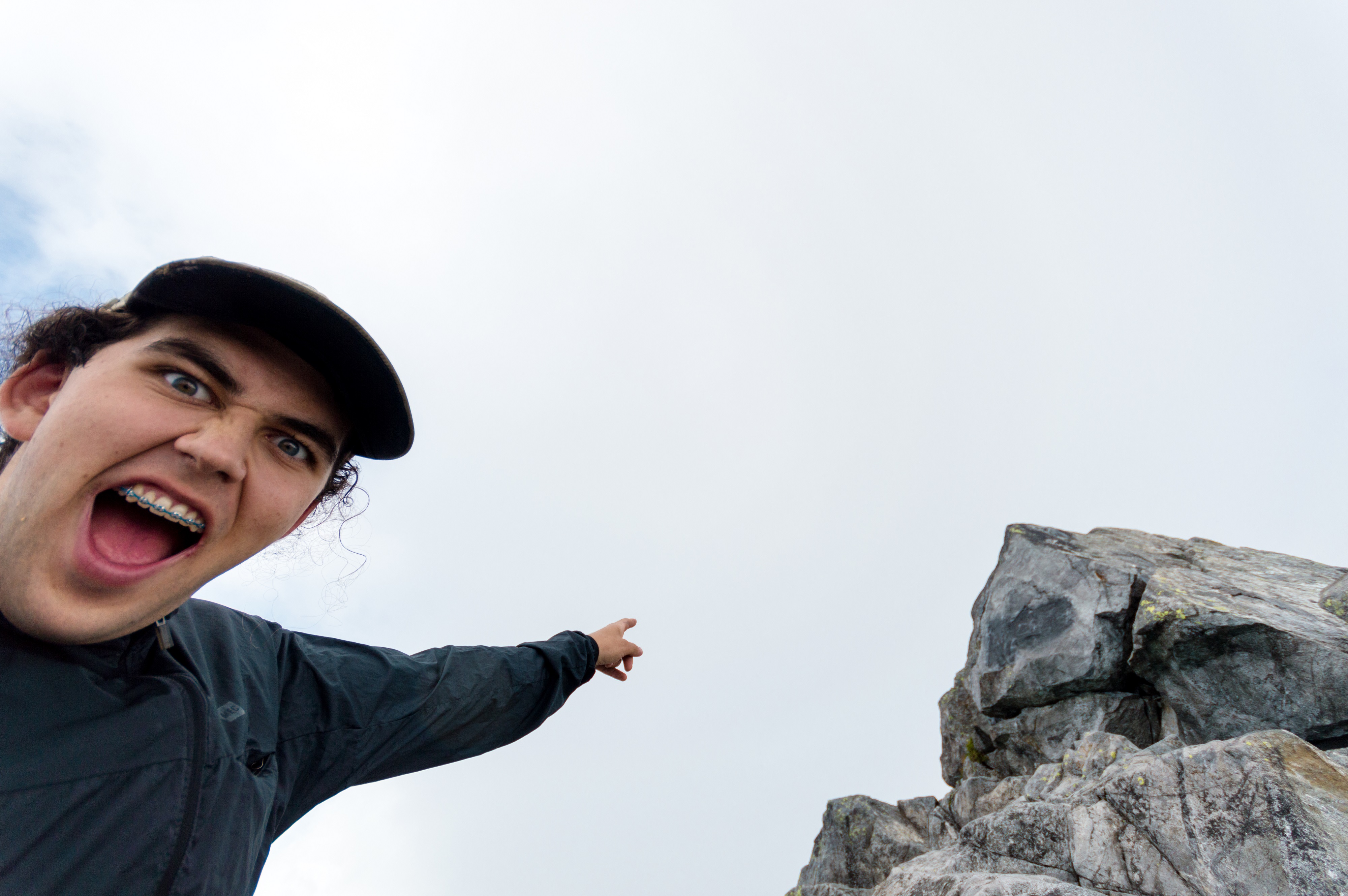 Straddling Mount Crown was certainly a feeling. Having sheer drops on either side is certainly a way to get acquainted with your sense of mortality. If there was ever a place to call spooky, this is it. We spent some time admiring the fleeting views of surrounding peaks (we never got a view of the city–no complaints), peaceful birds, and panicked messages our lizard brains were bombarding us with, before deciding it was about time to continue our walk.

Yeesh, that’s a long way down.

The way down was, as always, more of a drag than the way up. In addition to the difficult path, it was now later in the day and we met many hikers on their way up. No doubt the approach to Mount Crown would become as choked a highway as Mount Everest on this holiday Monday. We were glad to be making our way out of there. 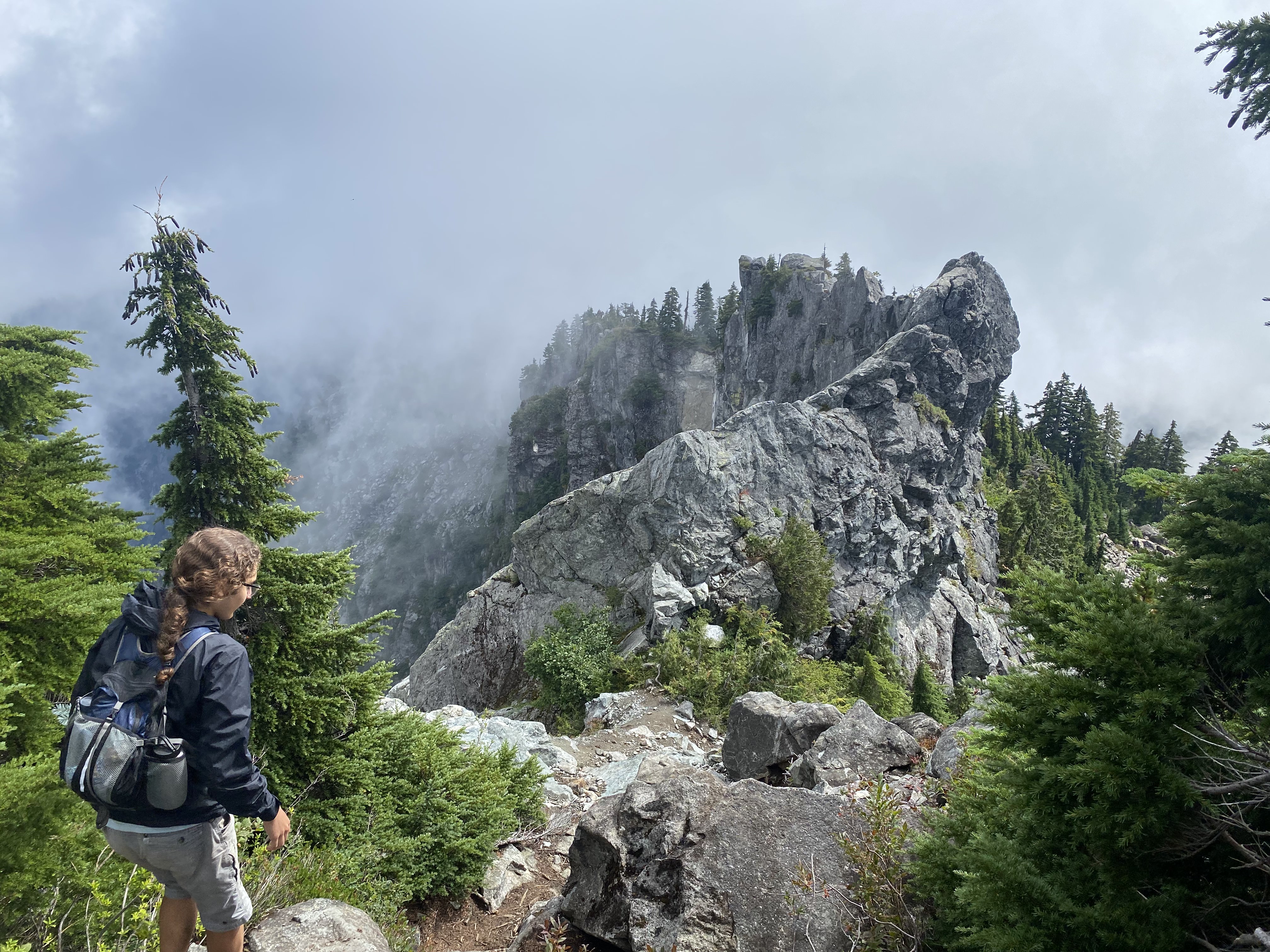 Ambling our way down Crown before hitting the crowds. Check out the wild rock formation! No alpine climbers today, but I’ve heard there are  routes all over this area. Maybe one day…

Climbing out of Crown Pass up to Dam Plateau, we met a constant stream of day hikers from Grouse. One couple stands out in memory: this guy who was wearing a bug net and his girlfriend who was giving him a hard time for it. We tried to encourage him and laud his preparedness, but as soon as they were out of earshot we also mocked him, for there weren’t really many bugs at all, and they certainly weren’t biting*. Oh well, he felt cool, that’s what counts.

*For more about killer insects, I’ll have to post a trip report about riding Skelu’la7 in Pemberton. I still shudder at the thought.

From Dam Plateau we turned left onto Thunderbird Ridge. A nice trail paralleling Grouse’s water pipeline from Kennedy Lake takes hikers to a viewpoint at the end of the ridge, but we dropped off the main route to pick up Erik the Red, a mysterious trail which gets little mention online and even less traffic, perhaps because of the “nowhere-to-nowhere” nature of its route. But it is a pretty trail, descending into a valley filled with many large trees and even more ripe salmon berries. It is odd to travel through unlogged forest on the North Shore. 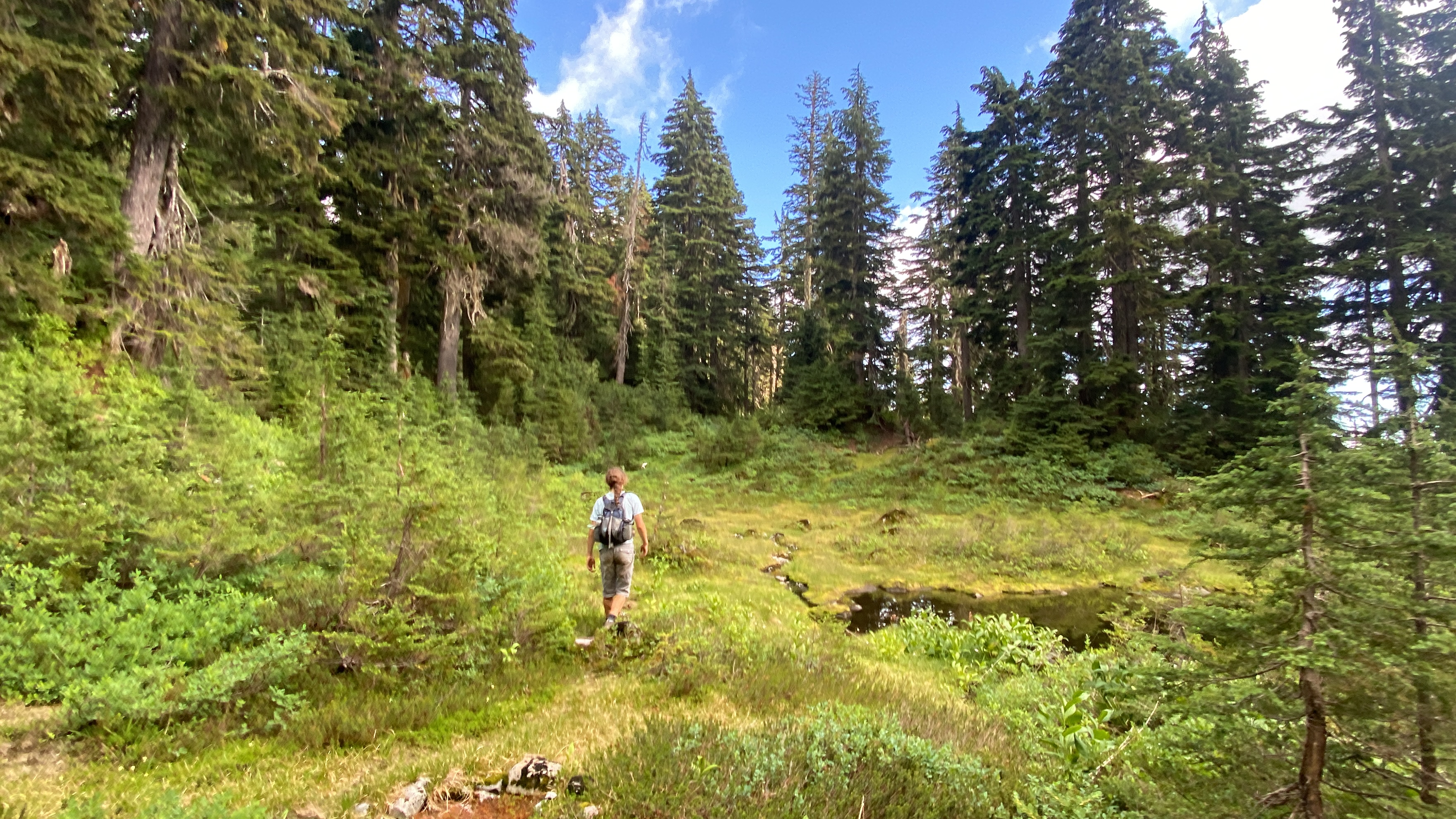 A change of pace on Erik The Red.

Eventually we made it to Whistler Creek after passing an older couple who were as surprised as we were to see people on this trail. Disorientingly, Whistler Creek descends from the back side of Grouse Mountain down into Lynn Creek. One thing that strikes you when walking here is how inhospitable the back sides of the North Shore mountains are; deceptive, considering the placid slopes which make up the front portions of these land masses. 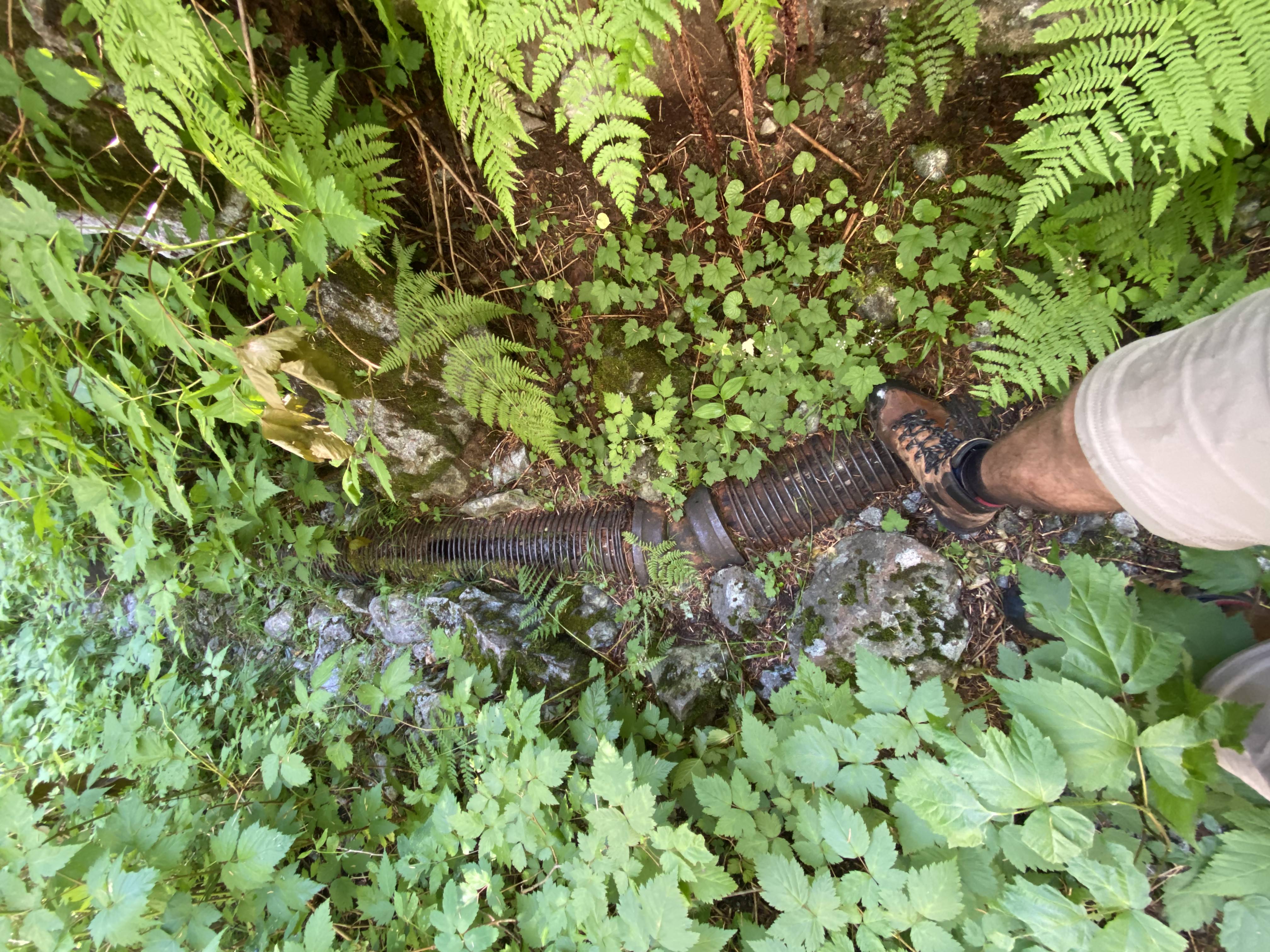 Pipeline in its eponymous Pass. Boot for scale.

From Whistler Creek we climbed to Pipeline Pass following, you guessed it, an old pipeline. At some point in the past water was supplied from Kennedy Lake to the city via this route, but it seems to have been a while since it was used. From Pipeline Pass we climbed the back of Mount Fromme via Doug’s Trail, also showing little signs of use. Sitting on the north summit of Fromme staring across at the Grouse Plateau, we found it amusing that we could hear all sorts of resort shenanigans clear as day. Watching heli tours come and go, the Lumberjack Show and bird demonstration blaring away, vehicles buzzing around. I found it amusing to call some friends at work at Grouse and being spotted through some binoculars. Ha! To our right, we gazed in awe at the pointy splendour of Crown, as well as, oh-so-far to the north, Skypilot and even Black Tusk!

From Fromme downwards the going got much easier, the trails more hospitable. Getting back to mountain bike trails was one step further home, and we hardly took notice at the technical black diamond rating on Executioner as we pounded down the trail—the front side of Fromme is a walk in the park compared to what we’d encountered earlier in the day. A pretty sunset filtered in through the trees as we jogged towards home, marking the end of another summer. 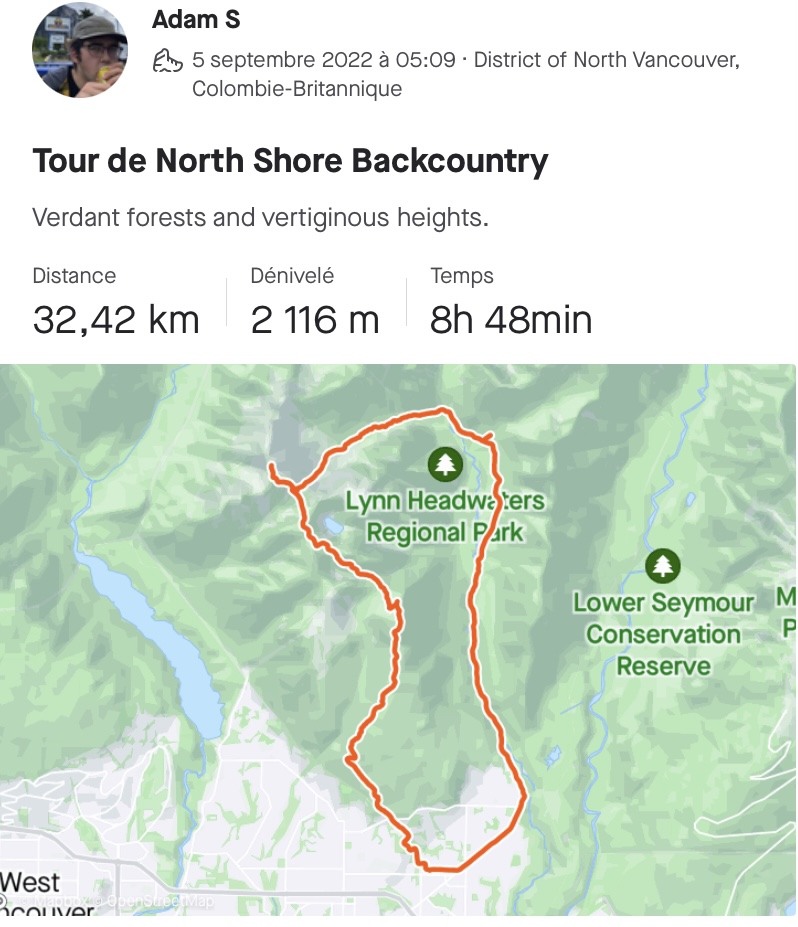 Quite a day of ups and downs…

I feel it necessary to comment on the wacky profile of our day; there was a lot of up and down, and at times I found myself confused and wondering if we were going up when we should have been going down and/or vice-versa! Down from our house to Lynn Valley, up from Lynn Valley to Mount Crown, down from Mount Crown to Crown Pass, up from Crown Pass to Dam Plateau, down from Dam to Whistler Creek via Thunderbird Ridge and Erik the Red, up Mount Fromme via Pipeline Pass, and finally all the way down Fromme back to our house. In total we did about 30km at 2000m of elevation. Still there after all this? Our knees weren’t.