Skelu’la7 or “Why I Will Never Again Forget Bug Spray”

On my Crown Mountain trip report I mentioned the rather mellow bug situation, and how I thought some passersby were overreacting, what with bugnets and their general hardcore posture. Now, I’ll try to regale you with an instance this past summer when I most definitely underreacted to bugs, a day which still haunts me this fall.

Located on the unceded territory of the Lil’wat and Stʼatʼimc people, Skelu’la7 is described by the First People’s Map of BC as “a mountain famous for picking huckleberries, mushrooms, medicine plants, hunting, and trapping”, and by Trailforks as single black mountain bike trail with “a tough climb with a great view” into the Owl Creek drainage. At 204m ascent, this might sound a little dramatic, but considering the 974m of climb leading up to the trailhead, my friend Aaron Griezic and I were keen to give this ride a go.

Leaving Vancouver bright and early to beat the infamous Pemberton heat, Aaron and I were doing our thing climbing the Mackenzie Basin FSR by about 8am on this fine July 28th morning. Thankfully, the long shadows of the mountains were keeping us in the shade, and the cool air felt nice through my UBC tank-top. If only I knew what would be in store…

Aiming to pack light, I thought one application of some thick sunscreen would be enough to get me through the day, saving space in my hip pack for water and electrolytes. Our initial climb along the NIMBY trail was a little buggy, to be sure, but such was the tradeoff for getting such a temperate morning in Pemberton! Besides, I could easily brush the bugs away, as they were all landing on my exposed and increasingly greasy shoulder blades… 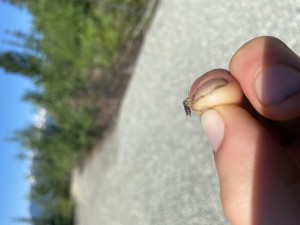 What should we name it?

The bugs giving us good cause to keep our legs moving, we soon came out on the FSR again, and took the chance for some more open riding. Mercifully, the air was not yet cooking or dusty, and the smooth road gave us the ability to put even more room between ourselves and our six-legged friends. We made good time on the road, and were rewarded for our hard work with impressive views of the surrounding mountains before arriving at the Mount Mackenzie cell tower lookout, where a breeze gave us some respite from the bugs. 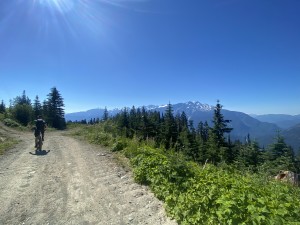 Approaching the top of the Mackenzie FSR. Mount Currie across the valley.

From here on things got bad, fast. Though it was sunny out, the heat had come on gradually and wasn’t too much of a bother. The insect situation, however, went from bad to horrific as we began the climb on Skelu’la7. With the trail becoming much more demanding, the sweat was rolling off us in gobs, telling every hungry bug in the vicinity that it was feeding time.

Having a moment on Skelu’la7.

We had seen zero other riders this Thursday morning (I wonder why), and you could tell from the zeal with which the skeeters and flies were sinking their various feeding media into our flesh that it had been a while since they’d eaten this well. It was hard to hear anything beyond our own grunting, occasional profanity, and, above all else, the deafening sound of insects crawling over every inch of us. If you’ve ever listened to the second part of Pink Floyd’s “Hey You”, you might get the idea.

Aaron had worn a long-sleeved shirt, and being a faster and skinnier dude than I, was a less appealing target to the bugs. Nonetheless, we were both quite disillusioned and miserable as we continued to pedal our bikes up the increasingly natural and untread trail. At a certain point, the trail skirts the edge of a clearcut and disappears altogether for about twenty metres, leaving hapless riders to push through damp undergrowth.

Eventually, we made it to the divide on Skelu’la7, which though welcome, meant we had to stop and pull on our kneepads. Weaving a tapestry of obscenity, that, as far as we know, is still hanging in space over southwestern BC (Christmas Story reference, anyone?), Aaron and I managed to get some food and water into us, briefly appreciate the Owl Valley below us (pretty!) and begin our descent on a trail which we realized, despite the views, for good reason gets precious little traffic in summertime. Stopping here and there to pass over deadfall, and passing through a number of damp and swampy sections meant the bugs continued to give us no quarter. 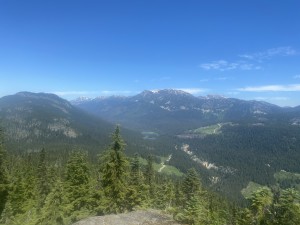 By the time we made it out onto the Owl Creek FSR, it was about noon, and so despite relief from insects and mud, we were now greeted with a hot road and a steep, dusty descent. Did I mention that we still hadn’t seen anyone else out? We started to think we had made a bad decision, but there was no turning back now.

The Owl Creek FSR is mostly flat at the top, before making a precipitous descent down to the Pemberton Portage Road. Rutted and dusty, I can see why people prefer shuttling their bikes up to ride around here—earning one’s turns really doesn’t seem fun. Spurning the rutted out mayhem which surely awaited us on the double-black rated Resurrectum trail, we stuck to descending on the road, but nonetheless had one hell of a time holding our lines and taking corners all the way down back to the highway.

A misread Trailforks entry made the final four-ish km’s on Reid Road an unexpected grunt, 182 metres of climbing rather than of descent. Good navigating Adam.

Dusty, disheveled, and missing a not insignificant amount of blood, Aaron and I were sure glad to return to the car, some five hours after setting out. The parking lot was still empty.

Not wanting to be too dramatic lest we jinx something while riding, we finally took the chance to remark at just how stupid of a bike ride we had just completed. Shorter and with more elevation gain than Whistler’s infamous Lord of the Squirrels, and less developed, we weren’t sure our death-march would elicit even the slightest recognition from other riders. In spite of the sufferfest, we had made a good morning of it, earned a swim, and learned a crucial lesson in the importance of bug spray. 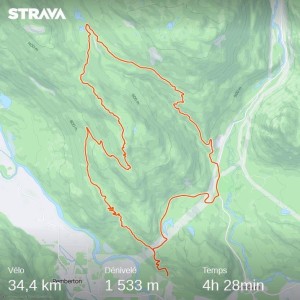 This entry was posted in Cycle, Trip Reports. Bookmark the permalink.