Last weekend we tried to go to Hollyburn but we were defeated by the Fondo (Bike race, in case you didn’t know). But this weekend had no Fondo so we should be able to do it. I phoned another VOC’er to see if she was interested, but she already had a better offer, so it was just Carla the driver, and I. The parking lot was empty, not at all like ski season. We had a brief faff at the toilets and discussion whether we should go up the “Dogshit trail”, the route you have to take in the winter if you didn’t buy a trail ticket. It wasn’t very crowded and nobody was selling tickets so we skipped the Dogshit. Up at the warming hut we saw this sign. 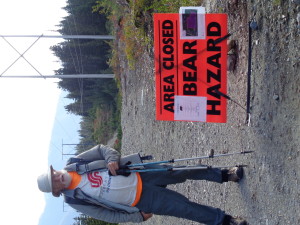 We decided that no bear was going to stop us, and about 20 other people agreed. We didn’t bring bear spray but we did have spray-on DEET mosquito repellent so we thought it might be fun to see if DEET repels bears, but alas, we saw no bears. For other dangerous animals, see later.  There was a reasonable amount of bear poop on the trail including some that looked pretty tasty.  If you have ever bought blueberry pie filling, you know what I mean.  I feel sorry for the bears.  I don’t know how they pick blueberries without having fingers, and then when they try to digest the berries they seem to emerge with all their nutrients intact.

The trail started out pretty nice. We found a closed outhouse so we made a GPS way point called CLOSED. We were talking quite loudly to scare away bears, but after a while we ran out of things to say, but we had to keep talking because of the bears. We saw a pair of trail runners, running and they stopped to talk. We were passed by quite a few dogs, including one being carried. We weren’t very fast. The trail seemed to consist of the ski run where you would normally need a ticket, and the other one, but we were never sure which one we were on. There must be plans to improve the trail as we found a helicopter load of lumber up there. They don’t seem to be planning an escalator yet. The trail seemed a lot longer than the last time we did it. There were many trails with lots of trail markers and ribbons. This one was not to tell you that the trail was here, but to discourage you from walking off the cliff behind the ribbons. 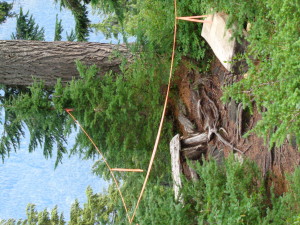 We saw Tim Blair doing his trail running thing.  He’s A VOC’er from way back, and he and former VOC President Katherine Valentine are now living in Calgary.  On the way down, I seemed to be dizzy and nearly staggered into the shrubbery a few times.  Carla nearly fell asleep.  Maybe we were walking too slowly.

Back at the warming hut we found a warning on the door that there was an attack squirrel up there. 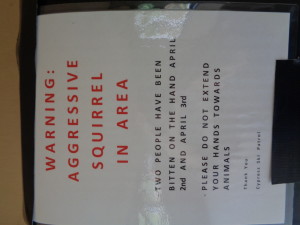 OK, that was a while ago

Of course no trip is complete without the 35 minute delay to cross the Lions Gate Bridge. The sign that tells you how long you have to wait was burned out.   While waiting in line on the Stanley Park Causeway, our car was passed by an electric wheel chair in the bike lane.

We concluded that as a training trip, it was a success. No bugs, not too hot, no rain or snow.  We walked 8.2 km and averaged 1.3 km/hour.  We rested a lot and stopped to talk, a lot.