After reports of overgrowth at the trailhead to Brew, Eric posted this workhike to clear some of the brush, and maybe cut some firewood for the hut. Thinking this would be the perfect way to kickstart the school year, I eagerly signed on to help. To avoid the clusterfunk that was Gran Fondo, we left Friday night from Vancouver and arrived at the Roe Creek bridge area around 9:45 PM. After the exchange of some pleasantries, we were asleep in our tents in preparation for the work of the next day.

When we awoke there was a faint smokey haze in the air. After a quick breakfast, we set off up the logging road for about a kilometre to meet up with Cassandra, Tom, and Julia at the bridge. There we divided loppers, chainsaws, chain oil, and other equipment before continuing for another five kilometres to the trailhead proper. Once we reached the cut block, the heat of the day was beginning to set in, and we began clearing the vegetation that had crept up onto the trail. We worked for about an hour, cutting about half a meter on each side and making sure to clear the view of the trail markers. The weather was clear and yielded a beautiful view of the Nch’kay/Garibaldi massif. Tom and Cassandra went up to the hut to begin collecting firewood while the rest of us cleared the trail. 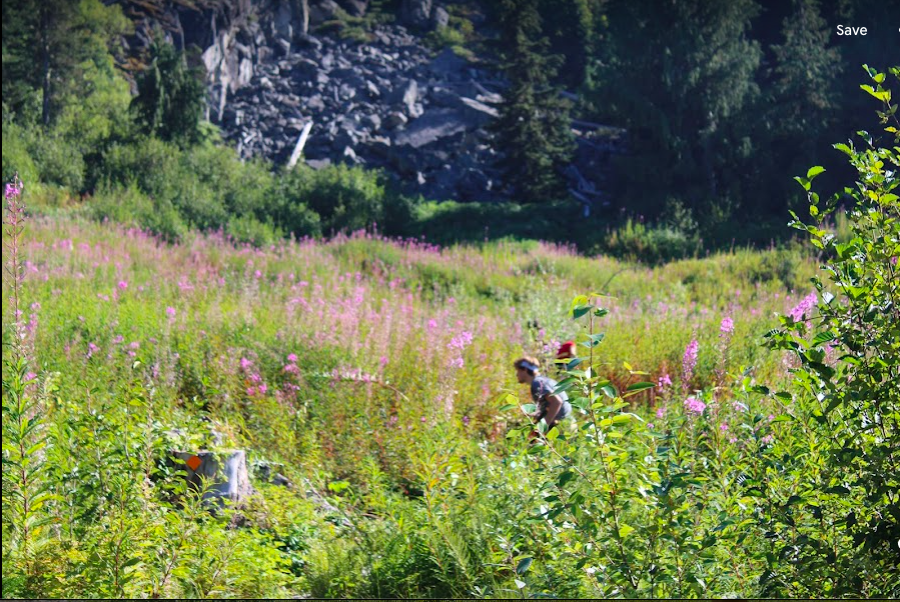 We reached the treeline at around noon and had a quick lunch in the shade before continuing up the trail, lopping as we went. We crossed a few boulder fields before ascending parallel to a creek which brought us into a lovely alpine meadow. Wild blueberries dotted the landscape, and we gorged ourselves accordingly. We eventually reached Brew lake, and in typical VOC fashion stripped down to individual preference in order to swim in its crystal waters. It made for a balmy autumn swim in the heat of the sun, and a lovely spot to break into our rations. 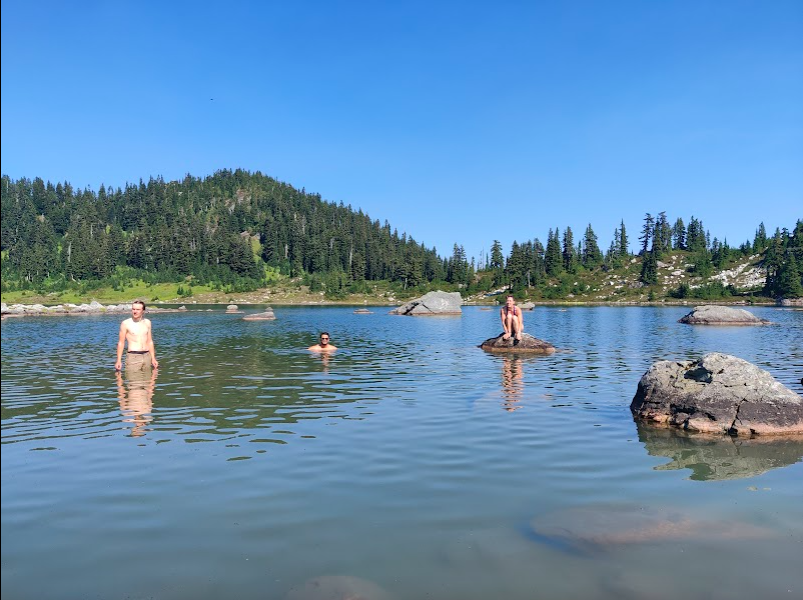 After we had had our fill of the lake, we pushed up the last kilometre or so of boulder field to reach a nice wooded col. The sound of chainsaws at work led us to Tom and Cassandra, who had amassed an impressive pile of stumps for us to lug up the ridge. We reached the hut shortly after and emptied our bags in order to begin the firewood ferrying. 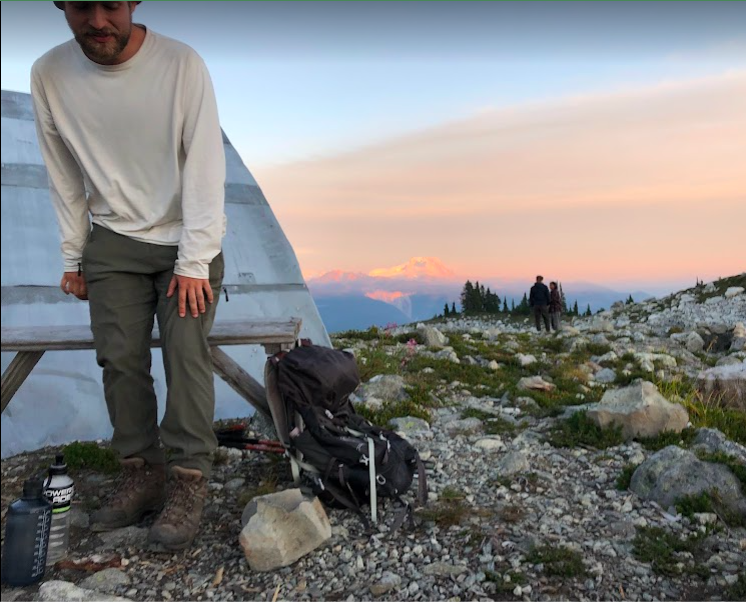 Eric awkwardly getting up with incoming smoke in the background. Photo credit: Lucas Braun

Upon imparting their wisdom on the ancient art of ratchet strapping wood to a backpack, Cassandra and Tom left us there with their hard-earned gains. The rest of us mortals took turns carrying stumps up to the woodshed, while Laura took up the mantle of Brew Hut chainsaw wielder, (imparting her knowledge onto Anja in the process). I personally transported five large tree stumps, and after dropping one on my ankle, decided that was a satisfactory amount to take before throwing in the towel and eating dinner. It was then that Eric, Haley, and Laura among others debated whether to continue lugging up wood or save our pennies for a helicopter. Considering how long it had taken to fill that woodshed in the past with the manual labour of twenty club members, we elected for the latter and enjoyed a relaxing evening. As the sun set to the south of Mt. Fee, the execs spun yarns of their adventures on the distant ridges. The stories were fascinating yet intimidating for us newer members, but they did well to distract us from the ominous clouds of smoke approaching from Garibaldi and Black Tusk. We returned to the hut, filled with the delicious aroma of Akash and Shruti’s homemade curry, and went to bed. 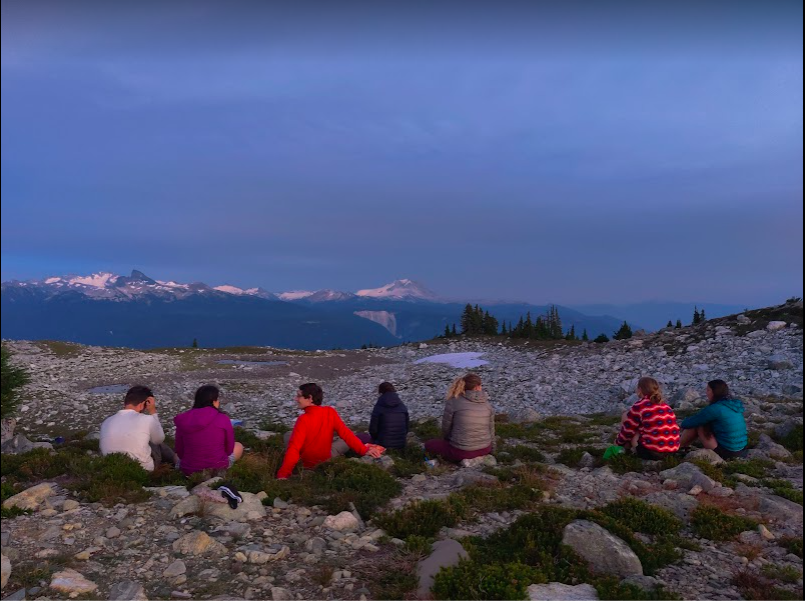 That night was interrupted by coughs and restlessness as smoke blew in through the hut windows. While nice and cooling in that cramped hut attic, it was quite harsh on the lungs, and Annabelle had to all but close the window to prevent a communal asthma attack. The next morning was a slow affair, with a nice smoky breakfast and stocking of the woodshed. We started leaving around 9:00 AM as the rain started falling, and drifted back to the cars around 12:30 PM. 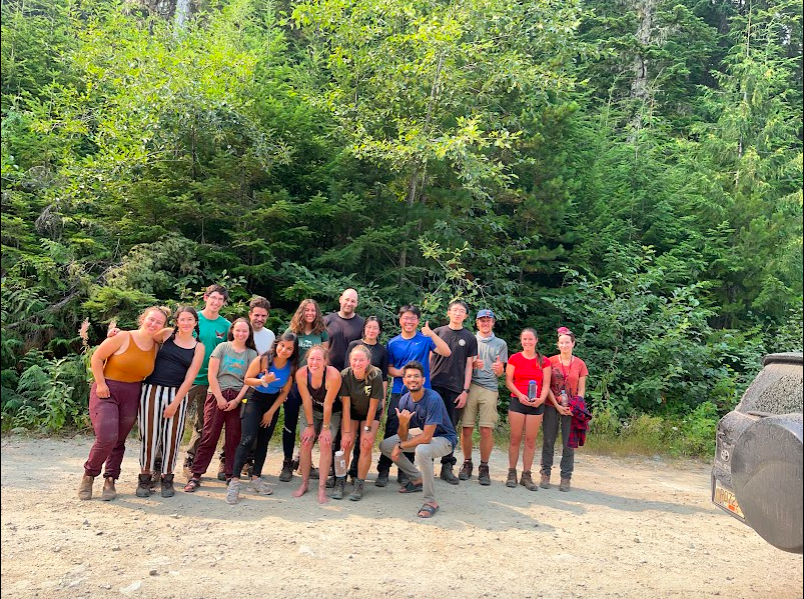